Since the days of Kings, Queens and Knights in shining armor, there has been the use of the Coat of Arms that distinguished one power from another.

These Coats of Arms were displayed in various ways, and could help a warrior distinguish an ally from and enemy.

While there are other ways to distinguish the enemy in today’s world, the Army has not let go of the use of the Coat of Arms.

Instead of a Coat of Arms per say, Army units have what is known as a distinctive unit insignia.

We also know them as Army crests.

The Army crest shows which division or unit a soldier or officer is attached to.

The primary method of wear is as a pin wore on the collar of dress uniforms or the lapel of mess jackets.

I have went through every Army crest I could find.

There are so many great designs that it is difficult to choose which are the best.

But, I decided to attempt to judge these designs.

In today’s post, I have decided to give my opinion of the top 21 U.S. Army crests.

Keep in mind how difficult this was, so if your unit crest is not on this list, do know that there are so many and they are all very well designed.

This is just my opinion, and you are free to add your opinion in the comment section at the end of this post.

I am also adding pictures of each crest.

These pictures are all courtesy of Wikipedia creative commons.

This battalion was activated in 2006, and was headquartered in Fort Sill, Oklahoma.

Their crest is a wonderful and colorful design.

It is red, white, blue with a yellow X encircled in the center.

The words Pursuit Of Excellence provide the message of what this battalion was all about.

They were deactivated in 2015.

Activated in 1952 as the signal support for XVIII Airborne Corps, this battalion saw many various headquarters during its time in operation.

They were deactivated in 2007, but their crest stands out strong and distinguished.

With a landing eagle in black above an orange bolt, the design is black and white.

The words Speed And Accuracy described this battalion exactly.

It is the largest U.S. Army command.

In operation since 1973, FORSCOM’s crest is a wonderful work of art.

With much red, white and blue, their is a upward facing trio-sword to the head of an eagle all in gold.

Also in gold are the words Freedom’s Guardian.

This specialized command was established in 1997.

Since the skies above have become a battleground, the Army is geared to protect that area.

Based at Redstone Arsenal, Alabama, their crest is quite descriptive of their task.

An eagle high above the globe, you find the words Secure The High Ground.

The crest for this battalion completely matches them.

This combat engineer battalion has been active since 1935.

Currently headquartered at Fort Bliss, Texas, they are often on the move.

This is a field artillery brigade attached to the XVIII Airborne Corps.

Established in 1943, they have been an integral part of the U.S. Army since.

They are based at Fort Bragg, North Carolina.

Their crest is black, red and gold.

An upward cannon with wings that says Sweat Saves Blood.

This is a rather new unit that was established in 2005.

Stationed at Fort Hood, Texas, they are the Spartans!

Their crest is quite colorful with an upwards sword surrounded by a shield and lightening bolt.

Based at Fort Riley, Kansas, this MP Battalion has been in operation since 1945.

They have a unique crest that is completely gold: 2 leaves intertwined with a sword, and in black the words Take Charge.

This regiment has a long history.

1st formed in 1821, they are now headquartered at Kadena Air Base in Okinama, Japan.

Their crest depicts an upward arm from the tower of a fort, holding the packing bar for a cannon.

The words Primus Inter Pares are inscribed below.

That means First Among Equals.

First started during the Civil War, they were reactivated in 2006 as a U.S. Army Reserve unit based at Joint Base McGuire/Dix/Lakehurst.

I love their crest which shows a patriot wielding his weapon, and a blue lightening bolt beneath.

It carries the words Pium In Cuspis which means Patriots On Point.

This is a Pennsylvania National Guard regiment that dates back to the Civil War.

Their crest displays the various tasks they have had through time.

All of that with the words Strive, Obey, Endure.

Based in Fort Lee, Virginia, they are the soldiers who supervise the storage of U.S. weapons of mass destruction.

The brigade was activated in 1955 and has been a major part of operations since.

Their crest depicts the leg of a dragon and a Korean Taeguk in red and blue.

The words with it are Power To Spare.

This is a Michigan National Guard unit.

The 126th has a simple but strong crest.

A large blue X with a red fleur de lis in each open area, and the words Courage Sans Peur or Courage Without Fear. 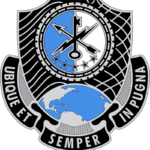 Started in 2011, their headquarters are in Fort Meade, Maryland.

The 780th has a powerful crest.

With a key, and arrow and a lightening bolt in the skies above the Earth.

The words under are Ubique Et Semper In Pugna which is translated Everywhere and always fighting.

The Fighting Eagles have been around since 1838.

I love their crest, and I believe you will too.

Take a look at its design at the right. 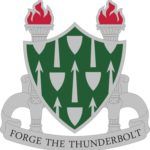 The Armor School was started in 1940, and is located at Fort Benning, Georgia.

The design of their crest is simple, yet magnificent.

Set on a green shield are arrows pointing forward.

2 torches burn at the corners, and written below is Forge The Thunderbolt.

First established during World War II, the 28th is a fully mobile hospital that is headquartered at Fort Bragg, North Carolina.

Because of so much work they did in China, the design of the crest has a Chinese design.

The words are Service Through Mobility.

This regiment has been active on and off since 1942.

Headquartered at Fort Campbell, Kentucky, the 506th has been an airborne unit much of its time.

Their crest is designed showing the green ground and the blue sky with 6 parachutes.

Below is written Currahee which is Native American for Stands Alone.

The 126th Aviation Regiment is with the Rhode Island National Guard.

Starting in 1987, this unit’s crest is quite unique and stands out with the words Faith, Flight and Fidelity.

The “Screaming Eagles” have a very recognizable crest.

You will know when you meet a member of the 101st when you see that Eagle and the words Rendezvous With Destiny.

Based in Fort Bragg, North Carolina, the XVIII Airborne Corps have been silently “dropping in” on enemies since World War II.

I simply love their crest design with 2 white wings wrapped around a red 3 star design around a very well designed dragon on a blue background.

And their nickname is below: Sky Dragons.

Do you agree or have a different opinion?

Leave your comments or questions in the section below.

If you would like, please tell us about your unit crest, and the history behind it.