World War II was a time that the soldiers and people who lived through it want to forget, but never will be able too. It resulted in death and carnage on a scale that the world had never known before.

The war started with an unprovoked attack on Poland by Nazi Germany and ended with the dropping of the Atomic Bomb on Japan; in between an estimated 50 million people lost their lives as a direct result of it.

As with all wars; the history of it is chronicled, the stories of bravery are told, and the human suffering that comes from it is well documented. There are tons of great books about WW2.  Here is a list of the top 20 WW2 books of all time, as I see it.

# 20 An Army at Dawn by Rick Atkinson

This book is part of a trilogy called “the Liberation of Europe”, which won Rick Atkinson a Pulitzer Prize. This book details the intense battles that took place in North Africa during WWII that laid the groundwork for the Allies push into Europe.

# 19 The Boys’ Crusade by Paul Fussell

There are a lot of incredible statistics that came out of World War 2; one of those is the fact that an infantryman on the front lines in Western Europe had a life expectancy of only 17 days. This is the autobiographical work of a soldier that bucked the odds and made it through six months before being severely wounded himself. Fussell’s eyewitness account of those six months is both intense and riveting.

# 18 The Naked and the Dead by Norman Mailer

This book, which was later made into a movie of the same name, is the personal account of the author as he fought in the campaign to liberate the Philippines. The men faced incredible hardship and loss as they went toe to toe with the Japanese. 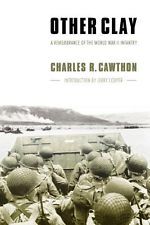 # 17 Other Clay by Charles Cawthon

On February 3, 1941, The Virginia National Guard’s H Company of Martinsville, Virginia was sworn into military service. What seemed like a simple ceremony would soon become a catalyst to tragedy. The unit would go on to suffer almost 100% attrition as most of its members were either killed or wounded in the next 4 years. The author was a platoon leader in the company and he takes the readers through the horrors of war from Normandy Beach to the Battle of the Bulge.

# 16 Now the Hell Will Start by Brendan I. Koerner

This is a true story. It is about an African American soldier, Herman Perry, who was part of a segregated battalion that endured abuse and prejudice from a white officer as they built a road across the Indo-Burmese jungle. Perry snapped and eventually murdered the officer. This is the astonishing story of the author’s personal account of the 5 year manhunt for Perry that ensued.

# 15 The Railway Man by Eric Lomax

This is a gripping autobiographical account of the brutality and insensitivity of a prisoner of war at the hands of his ruthless Japanese captors. After the British surrender in Singapore, Lomax is sent to work on the infamous death railway from Thailand to Burma where thousands of prisoners lost their lives. It also is different from other books because Lomax ends up confronting one of his former captors many years after the war ended.

This is another autobiographical work that chronicles the intense and bloody fighting in Guadalcanal as the author served with Charlie Company of the US Army. Of the 60,000 men who landed on the beach, one in nine never made it back home. Jones earned a Bronze Star and Purple Heart in the battle. 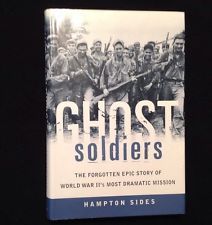 This is an epic account of World War II’s greatest rescue mission. Perhaps no soldiers had suffered more in the war than those that were captured in the Philippines by the Japanese. When word got out that the retreating Japanese were executing their prisoners of war, the commanders in the field decided that something needed to be done about it. This resulted in a daring raid that involved the first major use in history of the Army’s elite new Ranger Corps. Against heavy odds and countless obstacles, the Rangers and their Filipino Guerilla helpers pulled off one of the most daring feats in World War 2.

Hitler was a brilliant strategist that was known for never underestimating his opponents. The exception to that was Winston Churchill. This is a behind the scenes look at the strategy chess match that took place as each tried to make the decisions that would swing the war in their favor.

This is a true story about Lieutenant Louis Zamperini, an Air Force bombardier whose plane went down in the middle of the pacific ocean. Zamperini was the only survivor and this is his tale of how he overcame incredible odds to survive.

# 10 Tears in the Darkness by Michael Normanof

This is the story of the aftermath of America’s biggest defeat in wartime history. After holding out for 4 months against incredible odds in the Bataan Peninsula of the Philippines; 176,000 American and Filipino troops eventually surrendered to the Japanese. This is an incredible account of the subsequent Bataan death march where an estimated 15,000 men perished in the 65 mile trek. It also details the horrendous conditions and abuse they suffered in the aftermath as prisoners of war.

This is an autobiographical account from the leader of the German XIX Army Corps. Guderian was a tactical expert at blitzkrieg and is often credited with being the father of modern tank tactics. He wrote the book while in an allied prison after the war.

# 8 The Rape of Nanking by Iris Chang

This heartbreaking WWII book centers around the Japanese massacre in the city of Nanking, China in 1938. The Japanese atrocities included the rape and abuse of thousands of innocent women and the murder and torture of a countless number of others during the time of their occupation of the city. 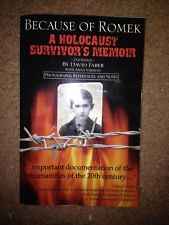 # 7 Because of Romek: A Holocaust Survivor’s Memoir by David Faber

This is Faber’s personal account of the Nazi atrocities he witnessed as a 13 – 18 year old boy who survived nine different concentration camps. It is a riveting and heartbreaking true story.

# 6 Eagle Against the Sun by Ronald Specter

This is a historical look at the war between the USA and Japan in the pacific. It has the unique perspective of being told from both sides point of view. It takes the reader from Pearl Harbor through the dropping of the first atomic bomb.

# 5 The Longest Day by Cornelius Ryan

This book deals with one of the most historic and bloody days in military history; the Battle of Normandy and D-Day. It chronicles the Allied assault on the Normandy beaches that left thousands of Allied soldiers dead and wounded as they tried to breach the Germans well entrenched defenses. The book is widely acclaimed because it reads more like a novel than a historical text because it includes a lot of eyewitness testimony. The book has sold many millions of copies and has been published in 18 different languages

This book takes a closer look at Nazi Germany from the early days of the Fascist movement all the way through Hitler’s death and total defeat. It is a well-researched book that closely examines all the data that was left behind by the Nazi’s and puts it all together for a fabulous historical read.

# 3 The Diary of a Young Girl by Anne Frank

Not only is this one of the most popular books written on the Second World War, It is one of the most popular books of all time. It is required reading in most secondary schools. Although there are no raging gun battles and bomb explosions in this book, make no mistake about it, this book is all about the worst part of war and the cruelty that human beings are able to impose on their fellow man.  It is the autobiographical work of a young girl and it tells of her pain and fear as she tries to stay hidden and avoid being sent to death in a Nazi concentration camp.

# 2 A World at Arms by Gerhard Weinberg

This 1200 page book by the German born historian Weinberg has been hailed as one of the most complete books on World War 2. It effortlessly chronicles the war on both the European and Pacific Fronts and all six continents where it was fought. It has been widely acclaimed and described as being the best book to look at the global history of the war. Many historians have dubbed it a masterpiece on history.

This is the story of the paratroopers of Easy Company of the 506th Airborne Regiment of the US Army as they fought their way from Normandy Beach and across Western Europe. It takes an intimate look at those who lived and those who died as the unit suffered an incredible 150% casualty rate. The book moved the actor Tom Hanks so much, he ended up buying the rights and making it into a 13 hour miniseries for HBO.

You may or may not agree with the books on this list. There are literally thousands of books on the subject. It is not a best sellers list; it is a ‘top WW2 books’ list that is made up of some of the best reads on World War II you will find. If you enjoy reading about World War II, then try reading one of these titles; you definitely won’t be disappointed and you may just end up agreeing that the book you read definitely deserves to be on the list.

Craig is a freelance author who currently resides in the Outer Banks of North Carolina. He is a four year veteran of the United States Air Force who was stationed in Okinawa, Japan and Omaha, Nebraska. Craig Started Freelance writing several years ago after a long spell as a business owner and manager in the swimming pool and hot tub industry.