Some may try to say that I do not live in the U.S. now because I reside in beautiful Puerto Rico, but I have news for you, Puerto Rico is a part of the United States. It is a Commonwealth, and I foresee a day it will add another star to the Red, White, and Blue.

I will be using: 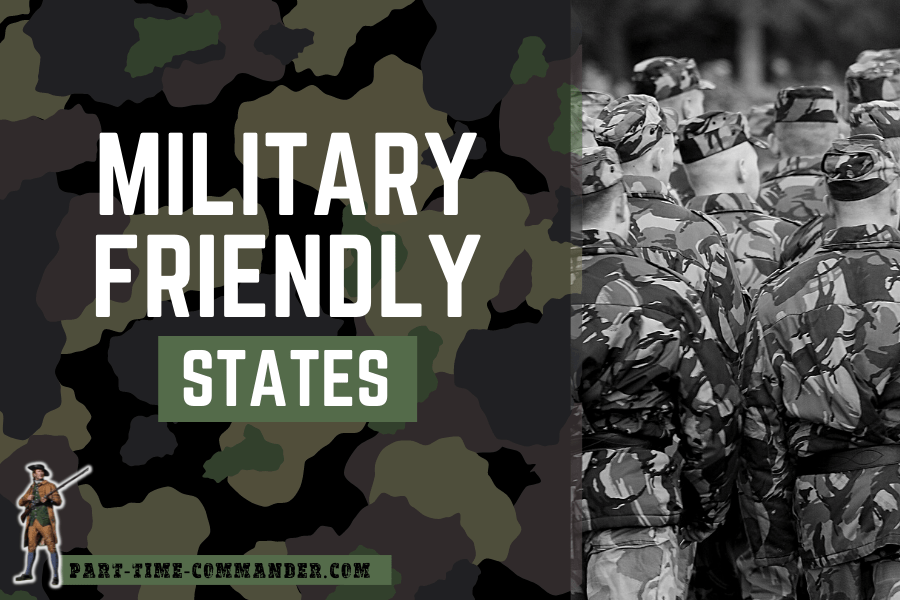 So without further ado, starting with #20 and working up to #1, let’s look at the most military friendly states.

Home of the 2nd oldest military base in the United States, Carlisle Barracks, Pennsylvania also has several other Army bases.

Pennsylvania is quite veteran friendly. The state has a wide array of veteran homes, and a range of other benefits or military vets.

The average temperature in Pennsylvania is nearly 56 degrees.

Indiana is known to be a very friendly military state. Employers are known to actively hire current or former military personnel. If you look throughout this midwestern state, you see dedications to Soldiers everywhere.

Indiana ranks high on overall discounts for military. The average temperature in Indiana is 52 degrees.

Maine offers a variety of benefits for military who reside in the state. These include tax exemptions, hunting and fishing benefits, along with a lot more.

It is a beautiful state that supports our military members. The average temperature in Maine is 46 degrees.

Not only is Hawaii a beautiful state, it treats military members with care. Yes, it is an expensive state, but if you are a service member or veteran, those costs are cut drastically via special incentives.

So its time to do the hula dance and move to Hawaii. The average temperature on the islands stays around 80 degrees.

Virginia has a high concentration of both current and previous military members. And, we all know that the military helps the military. They take care of their own.

It isn’t difficult to find employment and there is just the sense that you are where you belong. The average temperature in Virginia is 59 degrees.

This northern state comes in because of the high rate of employment opportunities for both ex-military and current military members. Jobs are rampant in North Dakota.

There are also many education advantages in North Dakota for military members. If you can handle cold winters, this may be the state for you. The average temperature in North Dakota is 43 degrees.

North Dakota military bases include Grand Forks Air Force Base and Minot Air Force Base.  North Dakota is home to over 46 thousand veterans. The state is bordered by Minnesota, South Dakota and Montana. ~ National VA Loans

South Carolina makes the list thanks to legislation passed in 2015 that makes the state much more military friendly. It included property tax exemptions and education benefits for military members.

The average temperature in South Carolina is 64 degrees.

South Dakota was not going to be outdone by its northern counterpart. This great state offers military members many amenities.

Nearly any store or restaurant you enter has discounts for the military. South Dakota loves the U.S. military and it shows.

It does stay chilly though, with an average temperature of 43 degrees.

I can surely vouch for Iowa since I lived in there for many years, and many of my family members still do.

If you wear, or have wore a military uniform, you will probably get discounts you just won’t believe. Plus, Iowa has some great tax incentives for military members and veterans.

So you may want to move where the corn grows tall. The average temperature is 51 degrees.

Connecticut ranks high for both tax and education benefits for military members. A beautiful eastern state, it may be a great choice to settle down with your family.

The average Connecticut temperature is 52 degrees.

Some rate this as the top state for military members.

While I do agree they offer many benefits to military members, I could not put it at the top just because of the cost of living. It is expensive to live in New York.

But, New York takes care of its military members.

The average temperature is 55 degrees. 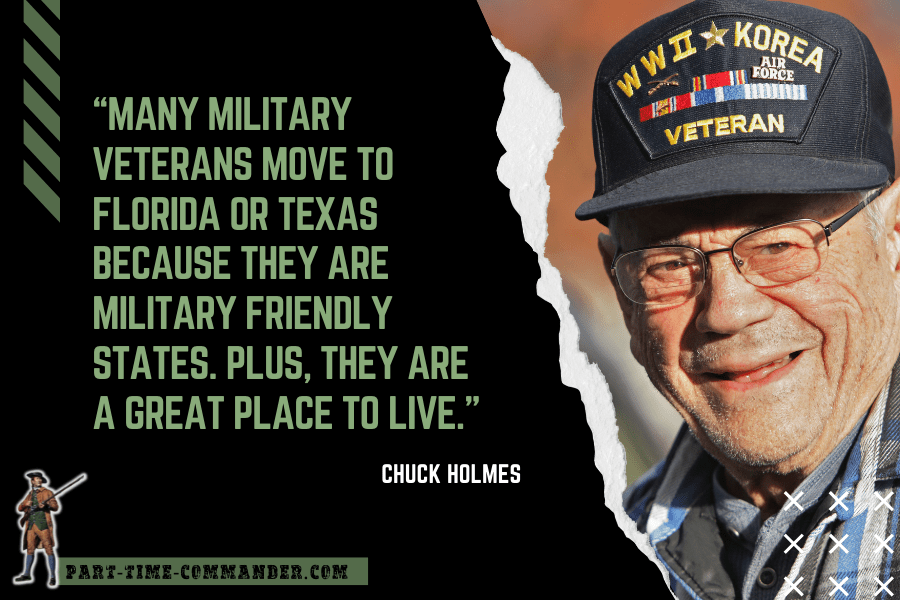 Wisconsin supports the military wholeheartedly. They are tops in finding discounts in stores or military members.

Here is another case where if you can take the cold, it may be a great place or you. The average Wisconsin temperature is 48 degrees.

It is a wide open range. Montana is a beautiful state and is wanting residents. They cater to the military; both current and previous.

You just may want to go buy a ranch and become a Montana resident. The average temperature is 46 degrees.

There is only one military base in the entire state of Montana. No other military branch keeps bases in MT. Malmstrom AFB is in charge of ICBMs along with a couple other bases. ~ MilitaryBases.com

Maryland is another state that already has a large military population. It offers extensive tax breaks for military along with some magnificent education amenities.

The average temperature in Maryland is 58 degrees.

Such a beautiful State that loves Soldiers. The tax incentives alone are amazing and add to it the discounts you can get from many merchants.

You have Nashville and Memphis and many mountains and valleys. An average temperature of 63 degrees makes Tennessee nearly the perfect place.

Alaska is another State that loves its military members. With your military experience, there are a plethora of employment opportunities.

There are many other benefits awaiting military members in the State of Alaska too.

But, the average temperature is 37 degrees. Do you like the cold?

Can you say no State income tax?

Many military members find Florida the perfect state to move to. The owner and operator of this website lives there, and you just may find it a perfect location, too.

The average temperature is 68 degrees.

This has been a well kept secret for many military members, but New Hampshire offers some of the highest tax breaks for members of the military. There are also a wide range of services for military veterans in this eastern state.

The average temperature is 46 degrees.

It was a tight race between #1 and #2. Texas has a great cost of living index and tax incentives for military personnel, combined with many other wonderful amenities.

Texas is a great state and should be highly considered as a settling spot if you are military. The average temperature is 69 degrees. 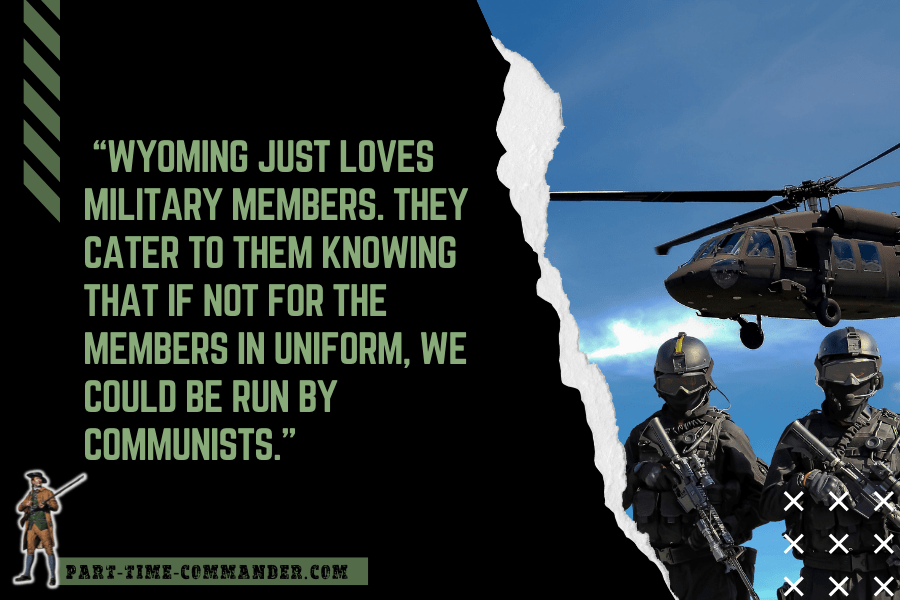 Wyoming just loves its military members. They cater to them knowing that if not for the service members in uniform, we could be run by communists.

There are countless military benefits in Wyoming, so if you are military, this just may be the best location for you.

The average temperature in Wyoming is 46 degrees.

Any active duty member stationed in Wyoming for at least 90 days can get hunting and fishing licenses at the resident price. ~ Military.com

Please leave your comments and questions below to share your thoughts. We look forward to hearing from you. Thank you.

1 thought on “Top 20 Military Friendly States to Live In”