The Civil War was a time in the history of the United States when family, friends and neighbors took up arms against each other.

I know that when I review my heritage on my Mother’s side, we had soldiers on both sides, but the majority were with the Union. My Father’s side barely had any people in the U.S. as they fled Belgium when Germany began to sweep across it in World War I.

The Civil War in the United States began in 1861, after decades of simmering tensions between northern and southern states over slavery, states’ rights and westward expansion. The election of Abraham Lincoln in 1860 caused seven southern states to secede and form the Confederate States of America; four more states soon joined them. The War Between the States, as the Civil War was also known, ended in Confederate surrender in 1865. The conflict was the costliest and deadliest war ever fought on American soil, with some 620,000 of 2.4 million soldiers killed, millions more injured and much of the South left in ruin. ~ History

As a person who loves to research, I grabbed hold of this with elated energy.

It can be quite difficult to put any certain military unit above another, but using various opinions and looking at battles and numbers of casualties, I am going to provide a list of the best of the best… The top 20 famous Civil War units. 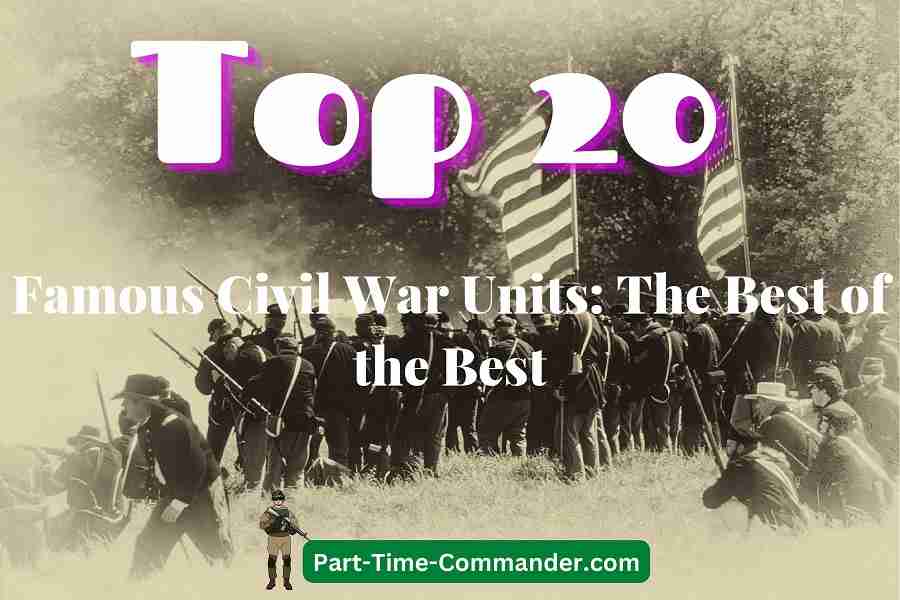 Led by Colonel Abram Duryée, this unit was known as Duryée’s Zouaves. Zouave comes from the French Zouaves who were fearless soldiers.

The 5th was formed in April of 1861. They were considered the best disciplined unit in the Army by General George McClellan.

The 5th participated in

This was another unit who used the French Zouaves depiction. After all, the French were quite populous in Louisiana.

These soldiers were mean and fearless. They were a part of many battles throughout the Civil War.

Originally formed in 1861, they did merge with the Army of North Virginia during the War.

They saw action in all of these:

The 21st was formed in 1861 with primarily volunteers from the Ohio vicinity. This unit fought mostly in the Western theater in the Civil War.

The 21st participated in:

Also formed in 1861, the 1st Minnesota were a very brave and fearless bunch of soldiers. They had high casualty rates because they were so fearless.

Battles they were in were: 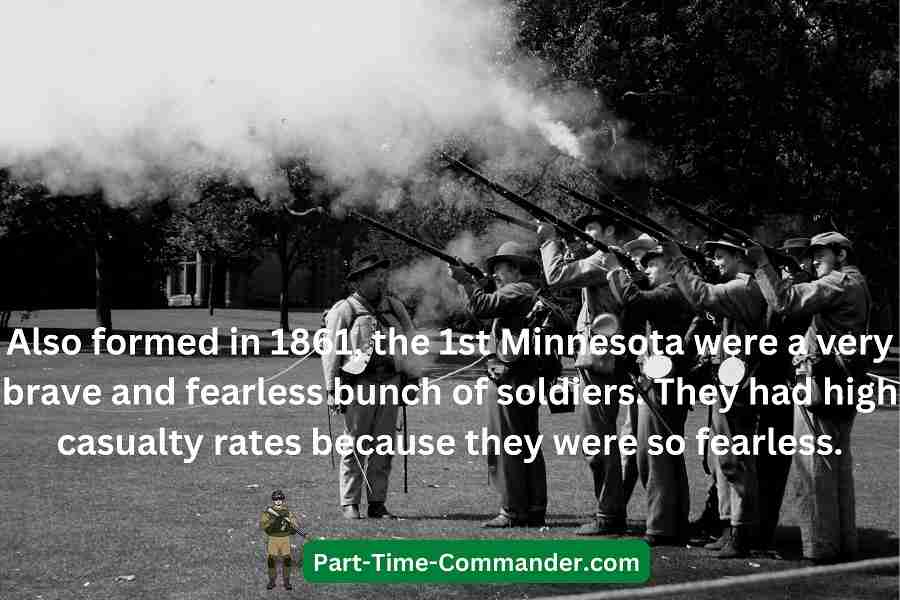 Brought into Confederate service in 1861, the 2nd Florida were in service all throughout the war. They fought in nearly every important battle there was on the Eastern theater. Several recognized leaders commanded the Florida troops with Edward Perry being one.

This infantry regiment is known to have the highest casualties of all units, both North and South, during the Civil War. Started in 1861, the 26th participated in:

Colonel Robert Minty put together this brigade which was known as the Saber Brigade. It consisted of:

This Brigade was phenomenal. With 900 men, they held off 5,000 infantry by using mounted saber charges at Reed’s Bridge in the Battle of Chickamauga.

What was so cool about this regiment was Old Abe. Old Abe was a captured bald eagle that went with the regiment into battle.

The primary battles the 8th participated in was:

They were a rough and tough bunch. Nicknamed Dirty First, the 31st fought hard in these Civil War battles:

Formed in 1862 to add troops because of the capture of 2 battalions, the 26th fought in:

They were also known as Custer’s Brigade. Newly promoted George Custer led these soldiers into various battles that included:

Known as the Rochester Racehorses, Captain Hiram Smith was given the go-ahead to form a regiment in 1862.

He built a solid infantry volunteer force who were in many battles that included:

General “Stonewall” Jackson formed this strong Brigade from undisciplined men and turned them into fighting machines.

This Brigade fought bravely in many battles and campaigns. While Jackson was promoted, he always stayed close in leading his brigade.

Many died and when they surrendered at the end of the Civil War, there were only 219 soldiers left.

Formed by Colonel John Wilder, this was a fierce brigade that showed determination and skill throughout the Civil War.

Colonel Wilder was able to get the new Spencer Repeating Rifles for his men which gave them a huge advantage.

One of their most pivotal Battles was at Chickamauga when other Union units were being driven back, the Lightning Brigade drove forward. 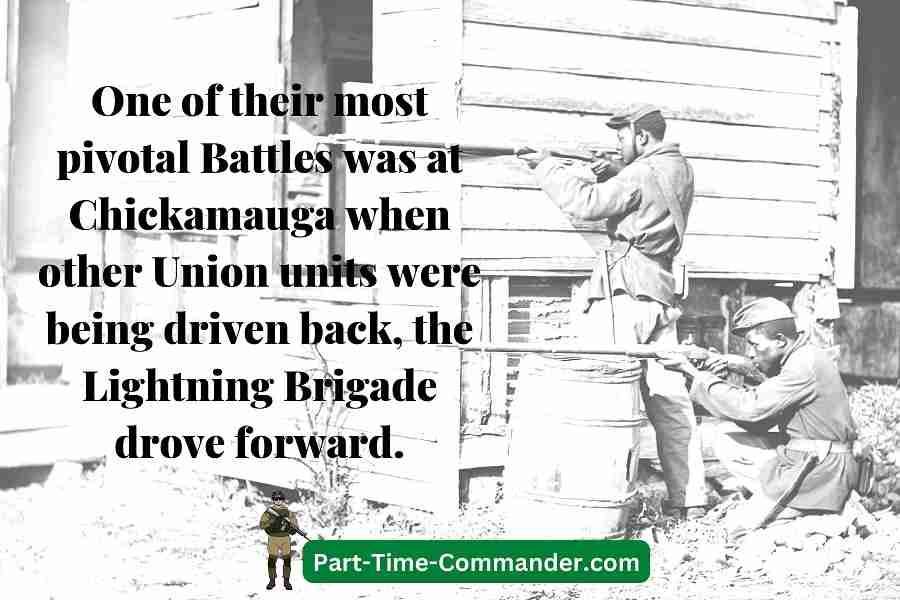 These soldiers fought hard and did not fear death.

To list all the battles and skirmishes the 1st were in would take several pages. I will just tell you that when the 1st North Carolina Cavalry Regiment surrendered in 1865, there were only 8 men.

We have written about the 20th and their famous defense at Little Round Top under Colonel Joshua Chamberlain. Their bayonet charge will always be remembered in history books.

Battles the 20th Maine were in:

An all African-American unit, the 54th was commanded by white officers.

They fought hard knowing their freedom was a great thing after being enslaved.

Battles these soldiers were in:

Known as Hood’s Brigade since he was given command of these hard fighting soldiers.

These troops were so mean, they were considered “shock troops.”

Battles the Texas Brigade were in:

Known for their distinctive uniforms, especially their black hats, the Iron Brigade gained their nickname because of their dispositions.

Soldiers in this Brigade came from Wisconsin, Michigan and Indiana.

They showed their gusto in:

Made up primarily with Irish-Americans who would fight like no one else could, their war cry was Faugh a Ballaugh which meant, Clear The Way!

This brave unit had its lineage carry on with the New York National Guard’s Fighting 69th.

I believe the Irish Brigade greatly earned their place as #1 on this list.

Northern victory in the war preserved the United States as one nation and ended the institution of slavery that had divided the country from its beginning. But these achievements came at the cost of 625,000 lives–nearly as many American soldiers as died in all the other wars in which this country has fought combined. The American Civil War was the largest and most destructive conflict in the Western world between the end of the Napoleonic Wars in 1815 and the onset of World War I in 1914. ~ American Battlefield Trust

What are your thoughts?

Do you agree with my list? Why or why not?

The history of the Civil War is both interesting and sad.

Please leave your thoughts below.

4 thoughts on “Top 20 Famous Civil War Units: The Best of the Best”