In today’s post, I’m going to share what I believe are the top 10 units in the Vietnam war. These are American units from all branches of service.

The Vietnam war was a long engagement for United States forces who were aiding the South Vietnamese against the North Vietnamese being backed by Communist sources. Vietnam lasted from 1964-1975. Over 2,500,000 Americans served in the military in Vietnam.

While there was much resentment that the United States was involved in this conflict, we must always remember that was a decision of politicians. The Soldiers who served showed courage and loyalty to the United States.

Many people claim that the U.S. lost the Vietnam War. I must say that is a false notion. We pulled out and because they did not have the resources, the South Vietnamese actually lost the War. One fact everyone should always keep in mind…no military units ever surrendered during this entire War. 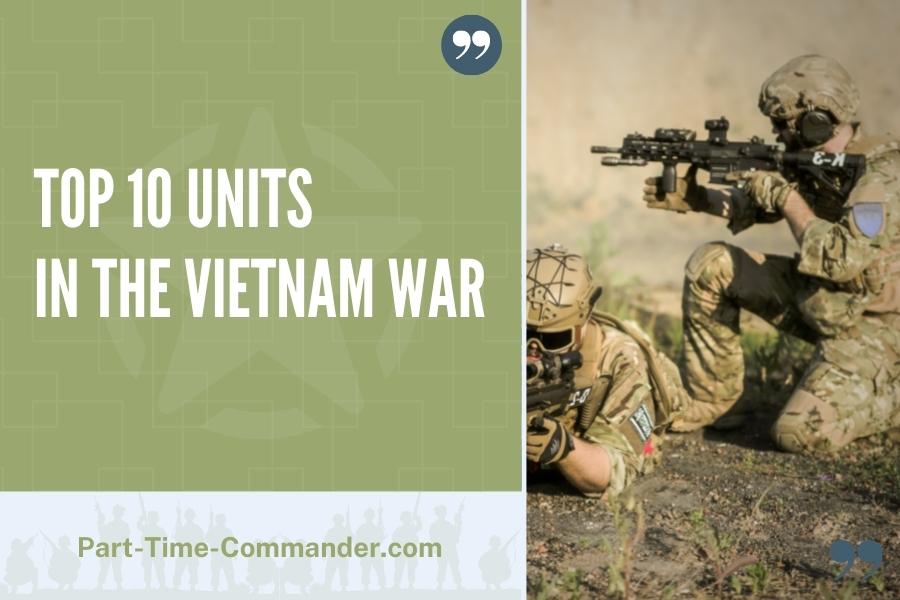 Top 10 Units in the Vietnam War

In the paragraphs below, I will provide my opinion of the Top 10 units in the Vietnam War. We will count down from #10 to #1. This list was compiled from independent research online. Of course, the list is very subjective. By all means, we can agree to disagree.

The 20th Engineer Brigade was reactivated in 1967 in Fort Bragg, North Carolina. Former Vice President Al Gore was a member of the 20th Engineer Brigade. They were responsible for clearing over 500,000 acres of jungle, building highways, and also bridges. The 20th was comprised of 14 battalions and 31 companies.

This brigade was activated at the start of Vietnam. With headquarters in Sembach, Germany, these Soldiers took control of all policing duties in Vietnam. They evacuated POWs, were the security of ports, and security at military installations. During the TET offensive, it was the 18th that stopped the Viet Cong from taking over the United State’s Embassy.

Activated during the Vietnam War, the Brigade oversaw all Military Police operations in the country for a large portion of the conflict, undertaking a wide variety of missions throughout the country and providing command and control for other military police groups in the region. ~ Wikipedia

Known as the Blackhorse Regiment, this division performed with fearless abandonment during Vietnam. They were the first to use Sheridan Aluminum Tanks during the war, and they did so quite successfully. This division destroyed a huge amount of Viet Kong tunnels and hideouts. One of the most famous was Operation Manhattan.

From the summer of 1967 until the winter the regiment was led by Col. Roy W. Farley. Operation Emporia I & II was a road clearing operation with limited RIF missions by the 1st and 3rd Squadrons in Long Khánh District. Operation Valdosta I & II was a regimental size operation. Its purpose was to provide security at polling places during elections and to maintain reaction forces to counter VC agitation. As a result of the operation 84.7% of eligible voters cast ballots in Long Khánh District in the first general election and 78% in the second. ~ Wikipedia

Known as The Big Red One, this division is the oldest continuous operating Army division. Based in Fort Riley, Kansas, these Soldiers fought long and hard in the jungles of Vietnam. Throughout this war, the 1st had 20 taken as prisoner, over 16,000 wounded, and over 6,000 Soldiers killed.

During the enemy Tet Offensive of 1968, the 1st Infantry Division secured the Tan Son Nhut Airbase the primary hub for air operations within all of Vietnam.  They returned to their home at Fort Riley, Kansas in 1970. ~ Sons of Liberty Museum

These Soldiers were reactivated after the TET Offensive to fill the shoes of a Marine division who was brought home. The Red Devils helped many South Vietnamese when floods overran the Quang Tri Province. They also helped get North Vietnamese away from the Laotian border. This division called Fort Carson, Colorado home.

The 5th Division’s 1st Brigade was alerted for deployment to Vietnam on 25 March 1968. At peak strength the brigade had over 6,000 personnel assigned and was one of the most potent fighting forces in the Republic of Vietnam. In June, the Red Devils received stand down orders with Stateside redeployment to commence on 1 July 1971. ~ Global Security

The Sky Soldiers as they were called, were predicted to completely win the Vietnam War. They certainly tried too. The 173rd is greatly known for their fierce fighting in the battle of Dak To. It was a very costly battle, and the 173rd lost many Soldiers, but they created a fear in Viet Cong forces. The headquarters of the 173rd is in Vicenza, Italy. 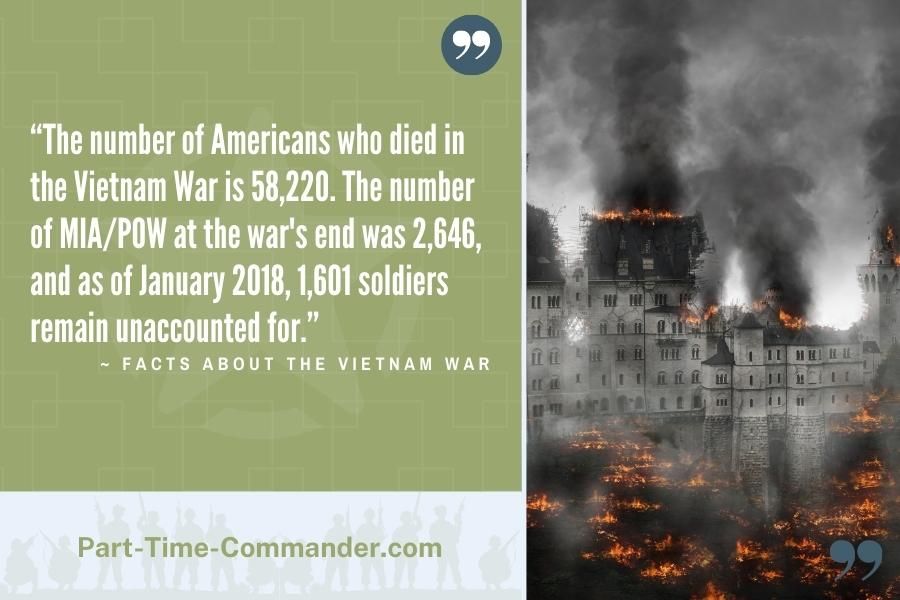 The Screaming Eagles are based at Fort Campbell, Kentucky. The Soldiers of the 101st were involved in 15 major campaigns in the 7-years they spent in Vietnam. The ones that are highly remembered are the Battle of Hamburger Hill and Firebase Ripcord. The great Buffalo Bill lineman, Bob Kalsu was a member of the 101st and was killed in Vietnam.

In the Republic of Vietnam, the 101st Airborne Division fought in 45 operations, spanning nearly seven years. Throughout South Vietnam, the division demonstrated its strength and spirit as a fighting unit, but the 101st also discovered some individual heroes. Seventeen Screaming Eagles earned the Congressional Medal of Honor for actions in combat. ~ Screaming Eagle

It all started for the 25th in 1963 when the division sent 100 helicopter door gunners to Vietnam. From there, many more were sent. They were known as Tropic Lightning and they were both thunder and lightning in Vietnam. Just consider the fact that 22 Medals of Honor were awarded to 25th Infantry Soldiers.

In December 1965 Tropic Lightning answered another call to fight against communism and deployed to fight in the Vietnam War. In a massive airlift, the 3d “Bronco” Brigade deployed to the central highlands at Pleiku; while the Division headquarters, along with the 1st “Lancer” and 2d “Warrior” Brigades, were transported by sea. By April 1966, all division units were in country with the headquarters established in Cu Chi district, 20 miles northwest of Saigon.

The Vietnam War was unlike previous conflicts; the enemy fought from the shadows and hid among the population. During its five years in South Vietnam, the 25th Infantry Division engaged in operations to destroy their elusive enemy, to include fighting during the Tet Offensive of 1968, and offensives against enemy sanctuaries in Cambodia during 1970. By April 1971 all Division units had returned to Hawaii after a seven year fight in Southeast Asia. ~ Home.Army.mil

This was the largest division in Vietnam. Nicknamed Americal, if you speak to any Vietnam Veteran, there is a very good chance they were a member of this division. This division was one of the first to arrive in Vietnam, and they had the last unit withdrawn from Vietnam. The amount of top awards earned by Soldiers of the 23rd are numerous for their heroic actions in Vietnam.

The Americal Division (23rd Infantry Division) was formed from elements of Task Force Oregon in Chu Lai, Southern First Corps, Republic of South Vietnam on 26 September 1967. The division, although designated as the 23rd Infantry Division, was most often referred to as the Americal Division in keeping with its jungle fighting lineage from World War II.

The division became the largest infantry division in the Vietnam War and its heavily contested area of operations in Quang Ngai and Quang Tin Provinces included more territory than any other division in Vietnam. ~ Americal Foundation

Due to the hundreds of concerned emails and comments I have received from website visitors over the past two years, I have updated this list and ranked the 1st Cavalry Division as the # 1 unit in the Vietnam War. The First Cav Division has a strong, proud tradition. Their service in the Vietnam War was phenomenal.

The 1st Cavalry Division, popularly known as the “First Team,” was the only American division to fight in all four corps tactical zones. The bulk of the division began departing Vietnam in late April 1970, but the 3rd Brigade remained until June 1972. The 1st Cavalry Division was awarded the Presidential Unit Citation and “First Team” soldiers won 25 Medals of Honor, 120 Distinguished Service Crosses, 2,766 Silver Stars, 2,697 Distinguished Flying Crosses, and 8,408 Bronze Stars for Valor. ~ USAStruck.com

In review, these are the top units in the Vietnam War, as I see it.

I had several family members who spent time in the jungles of Vietnam. I give a huge thumbs up to my Uncle Kenny who managed to come home alive, but in distress mentally and emotionally.

Maybe we didn’t need to go to Vietnam, but we did. Many brave Soldiers stood for us and risked their lives and limbs. May God bless all these Soldiers, and if you are a Vietnam Veteran, I must give you a hearty thank you from the bottom of my heart.

For those of you that feel the need to comment, please do so below. Tell us what you think are the top units in the Vietnam War. I look forward to hearing from you.

Here are a few books I recommend if you want to learn more about the Vietnam War.