MREs is the shortened name for Meals Ready to Eat.

Feeding the military is a big job, especially in combat or while in the field. Throughout history, the Army has evolved with their food preparation.

Think of an MRE as a prepackaged meal. It comes in a sealed plastic bag. It can withstand hot and cold temperatures. Most of the food has been dehydrated and has a long shelf life. Normally each MRE has a main course, an appetizer, some snacks, a dessert, utensils, a drink mix, and condiments. Service members can open their MRE whenever they are hungry, add water to the heater (that comes in the MRE) and have a hot meal, all within a few minutes.

The MRE was adopted as the Department of Defense combat ration in 1975. A large-scale production test began in 1978 with delivery in 1981. MRE I (1981) was the first date of pack. In 1983, a field evaluation was conducted with the 25th Infantry Division for 34 days. They ate nothing but MREs three times a day. Although troops rated the ration as acceptable, consumption was low – only about 60% of the calories provided were consumed.

Another test in 1986 with the same division resulted in increased consumption and acceptance. Based on these tests, a significant number of changes were made to MREs starting with the 1988 MREs (MRE XVIII). 9 of the 12 entrees were replaced with new ones and the entree size was changed from 5oz. to 8oz. Commercial candies were added to 4 menus, hot sauce was added to 4 menus, and cold beverage bases were added to all 12 menus. ~ MREInfo.com

Is there really a good MRE? That depends on who you ask. In my opinion, the food is edible, but I wouldn’t want to eat it consistently for days on end.

As a Soldier, I ate my share of MREs. I have tasted both bad, and not so bad. I cannot really say that I have ever tasted a good MRE, but when you are in the field and there is no Applebee’s, Red Lobster, Pizza Hut, or even McDonalds around, you will happily eat what is given to you.

What I want to do in the paragraphs below is share what I believe to be the top 10 MREs of all time. Keep in mind my taste buds are probably different than yours, so you might not agree on my ranking. That’s okay. 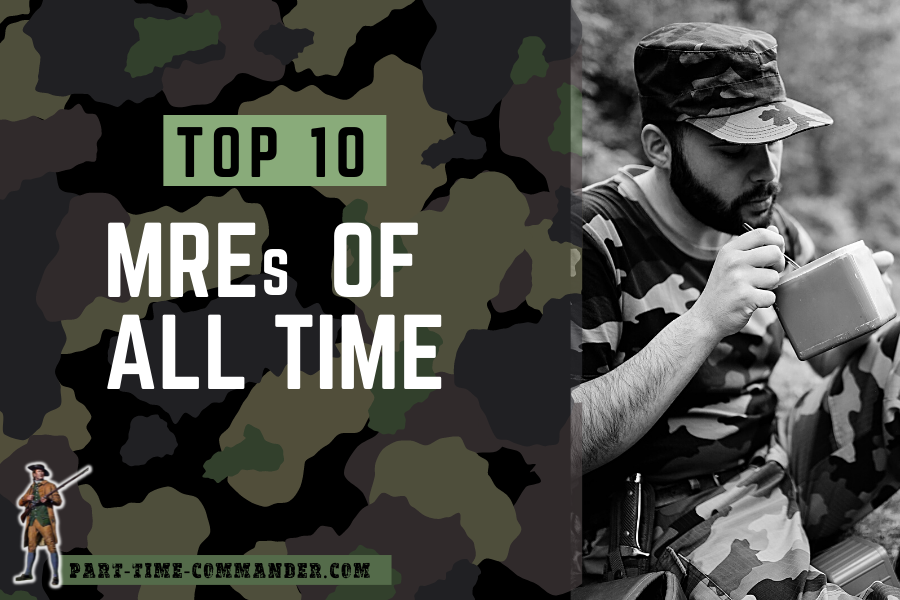 I know I will probably hear from some haters on this one, but some of us actually like this MRE that ran from 2005 to 2008. Yeah, we understand that these eggs may not be from real chickens; some Soldiers have claimed they are frog eggs (do frogs really lay eggs?). The other fact is: there is no meat, so the vegetarian Soldiers were happy. For you haters, try dumping some packets of ketchup on it.

Better known as the Hockey Puck, I actually will say these taste better than the McDonald’s burger. No, it isn’t really made from a cow, but soybeans. Throw some of the cheese and barbecue sauce on this Puck, and you can eat something that tastes okay. The beef patty has been served in MREs for years. It goes back to MRE #1 from 1981.

It seems the Army gets what seems to be a decent MRE and they pull it. After all, they can’t have troops enjoying field rations that much. Chicken with that much desired Buffalo sauce was an MRE that ran from 2009 until 2011. It seems that many individuals liked it so much, they are paying top dollar on the internet to anyone who has Buffalo Chicken MREs in their prepper storage supplies. Yea, I liked it, but I wouldn’t pay for it.

The ham slice MRE has been around for a long time, and believe it or not, it IS real ham. I must admit this was a favorite of mine when I was in the field. The favorite didn’t necessarily come from the taste (which wasn’t bad), but the size of the portion made me feel as if I ate a real meal. I would actually feel full after eating the ham slice Ready to Eat Meal. If I were preparing for the end of the world as we know it, the ham slice MRE is what I would be stocking next to my rounds of ammunition.

# 6: Chicken With Tomatoes and Feta Cheese

This is a newer MRE, and it seems to be quite popular. I had the opportunity to try it when I was visiting back in Missouri and went on an overnight fishing trip. My fishing buddy has a direct connection with “I can’t mention the name or rank” at Fort Leonard Wood. Since the fish had not started biting yet, we had to settle for an Army MRE and I had this concoction. Ok, I’ll admit it…It was good!

I probably would have this setting even higher if the pack came with more. The portion is small, but the beef stew does have a decent taste. Beef stew will probably never leave the Army MRE menu roster, but I will suggest that they try to up the portion size, or at least throw a ham slice in with it. By the way, I just have to ask…Is it really beef? As a person who has hunted many squirrels, it sure seems to taste quite similar.

If you enjoy a good ole McRib sandwich, you will probably also like the imitation pork rib MRE. As a matter of fact, I have this impression that either the makers of this MRE stole the recipe from McDonald’s, or the other way around. These pork rib Ready to Eat Meals came out in 2003, but it seems they stopped giving them in 2010. I do know it seemed to cause a huge bout of constipation, but what’s a little constipation when something tastes good after being in the field all day? I think I need to go to Mickey Dees and get a McRib.

Do not let the nauseous smell of this when you first open it stop you from eating it. It tastes good, and I also recommend eating the chili mac MRE immediately after the pork rib. I mentioned that the pork rib gives constipation, but the chili mac has the opposite effect. This was an early development of MREs, and they have it still on the menu.

# 2: Pork With Rice in Barbecue Sauce

I had a difficult time between this choice and the number one pick. This short-lived MRE was very good. So much so, I believe people will pay a high amount of money to get some now. If you have any of the pork with rice MREs stashed, you may consider putting them on eBay as you may be able to live stylishly with the profits you make. From what I see, these MREs only ran from 1988 to 1995, so they could be a rare find (and fermented at that).

This is a great MRE. The portion is good, and it is close to how my Great Grandma cooked it (when she was 102). It looked good and tasted good, and the extras that came with this MRE made it seem like a family reunion with all the fix-ins, If I remember correctly, you get the Beef Roast and Veggies along with:

And a Dire Warning!

As an extra, I am going to give you a warning! If Corporal Dick Wad (who may be a Sergeant now) tells you that the Veggie Burger with Barbecue Sauce is the bomb…Run! Run the other way fast and don’t look back. Do not fall for Dick Wad’s trick. I tried to feed my dog this MRE…He wouldn’t eat it. So I tried to feed the neighbors goat that eats anything the Veggie Burger MRE…It attacked me. So I talked my little brother into eating the thing. He hasn’t spoke to me since and he swore revenge against the makers of the Veggie Burger MRE.

They stopped making this MRE in 2010. I believe someone exploded a homemade IED and destroyed the equipment to make those rotten things. (Ok, this is just a made up story, but please, for your safety stay clear of the Veggie Burger with Barbecue Sauce.)

What do you think? Is my assessment close to your choices? Please leave a comment below and tell me your top 10 MREs of all time, and don’t forget to add your least favorite. Thanks and as we say here in Puerto Rico: Buen Provecho!