In today’s post, I’d like to share what I believe are the top 10 famous National Guard units of all time. Keep in mind that some of these were before these units were designated National Guard. I simply use the fact that they were state led militias that served in the defense of our country. You may agree or disagree with my findings. Feel free to share your opinion at the end of this post in the comment section.

Now while I am numbering them, it is impossible to say one unit was better than another. I believe every unit listed here deserves equal respect as do National Guard units not listed here.

If you look at the history of the United States Army you will discover the National Guard played an important role in the defense of our nation throughout time. Some people may call members of the Army National Guard weekend warriors but truth be told, if not for various Army National Guard units, we would have had different outcomes in many wars and conflicts.

“Our National Guard, as I think everybody knows, has provided about 40 percent of the boots on the ground in Iraq and in the conflict against Islamofascism. They went into that battle, being called up for their national security service, short of equipment.” ~ Kit Bond 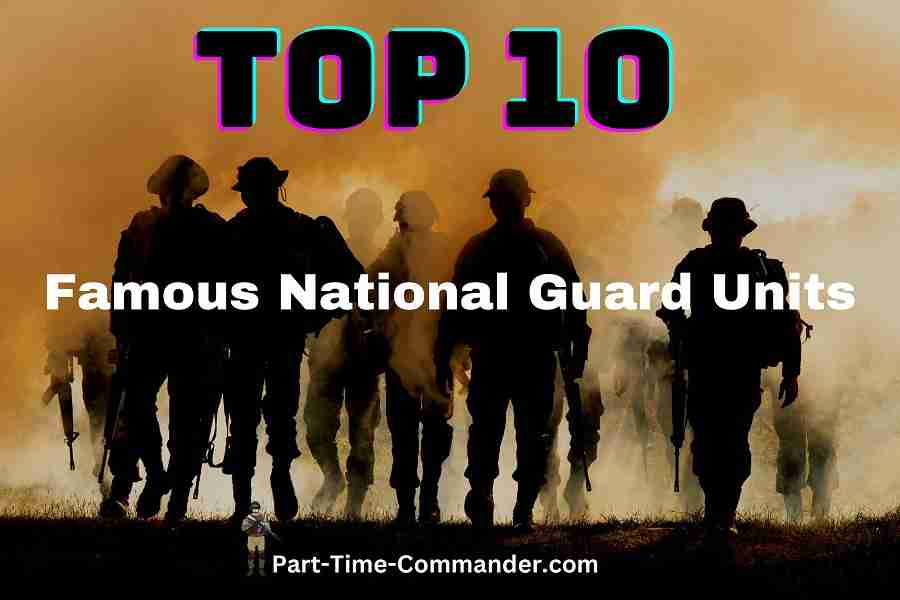 So without further ado, here are the top 10 famous National Guard units.

This is a case of not being designated “National Guard” but this was an all volunteer force from Maine who made one hell of a stand at Little Round Top during the Battle of Gettysburg in the Civil War. The Commander at that time was Lt. Colonel Joshua Chamberlain. While the 20th was disbanded, the 133rd Engineer Battalion of the Maine National Guard carries the 20th’s honor and lineage.

The 20th Maine held off six attacks by the determined Alabama men, but Colonel Chamberlain knew that his regiment, low on ammunition, could not withstand a seventh. He therefore ordered a counterattack with fixed bayonets, and the 20th charged down the slopes of Little Round Top into the startled Confederates and broke their attack. The 20th Maine took 400 prisoners and stopped the Confederates threat to the Union flank. The crucial role these Maine militiamen played in the Union victory at Gettysburg exemplifies the military qualities of leadership, initiative, unit cohesion and gallantry. ~ National Guard

The 200th was formed as a New Mexico militia in 1880. While there were various developments with the 200th throughout the years following their organization, the fame comes when Pearl Harbor was attacked by the Japanese. In 1941, the 200th was sent to the Philippines. They were hard fighters and some elements of the 200th were forced into the Bataan Death March. Now the 200th Coast Artillery is designated the 200th Infantry Regiment of the New Mexico National Guard.

The 200th Coast Artillery (Anti-aircraft), originally the 111th Cavalry — a New Mexico National Guard unit — had been sent to the Philippines to provide air defense for Clark Field. Typical of American Guard units, it was a hodgepodge of races and colors with Mexican and Native American blood running through the men’s veins. There was a certain pride in this uniquely American mixture; while overseas dictators preached the dominance of a master race, they served for the freedom of all. ~ Angel Fire

We knew them as the Rough Riders. They were put together in 1898 for the Spanish American War. The commander was Colonel Leonard Wood and 2nd in Command was Theodore Roosevelt. The Rough Riders battled long and hard in Cuba taking many Spanish held positions including the infamous San Juan Hill. The Rough Riders were disbanded just before World War I.

The volunteers were gathered in four areas: Arizona, New Mexico, Oklahoma, and Texas. They were gathered mainly from the southwest because the hot climate region that the men were used to was similar to that of Cuba where they would be fighting…  With news trickling down of Spanish aggression and the sinking of the USS Maine, men flocked from every corner of the regions to display their patriotism. They gathered a diverse bunch of men consisting of cowboys, gold or mining prospectors, hunters, gamblers, Native Americans, and college boys—all of whom were able-bodied and capable on horseback and in shooting. ~ Wikipedia

The 164th Infantry Regiment started way back in 1906 in the North Dakota National Guard. The 164th is best known as being hooked with the Americal Division and in 1942, they were the first unit to arrive at Guadalcanal to reinforce the Marines. They engaged in heavy combat and the Marines were so impressed, they nicknamed them the 164th Marines.

During World War II, the unit found itself in the Pacific theater of the war, ordered to relieve Marine forces pinned down on Guadalcanal. On October 13th, the 164th became the first U.S. Army unit in World War II to offensively engage the enemy. For their actions, the unit earned a Presidential Unit Citation, as well as the respect of their Marine cohorts. The unit was authorized to wear the 1st Marine Guadalcanal Patch on their uniforms, and became known as the “Little Marines” or the “164th Marines.” Marine Commander Puller later remarked of the 164th, “Those farm boys can fight.” ~ Prairie Public Newsroom

The 7th Regiment of the New York Militia is considered the first to be designated “National Guard.” This came in tribute to Marquis de Lafayette and they were named Battalion of National Guards. Before the Civil War erupted, the 7th maintained order in New York during many riots. Many members of the 7th held esteemed social status in New York.

The 7th Regiment of the New York Militia aka the “Silk Stocking” regiment, (due to the disproportionate number of its members who were part of New York City’s social elite), was an infantry regiment in the Union Army during the American Civil War. The 7th Militia was a pre-war New York Militia unit that was mustered into federal service for the Civil War. ~ Fandom 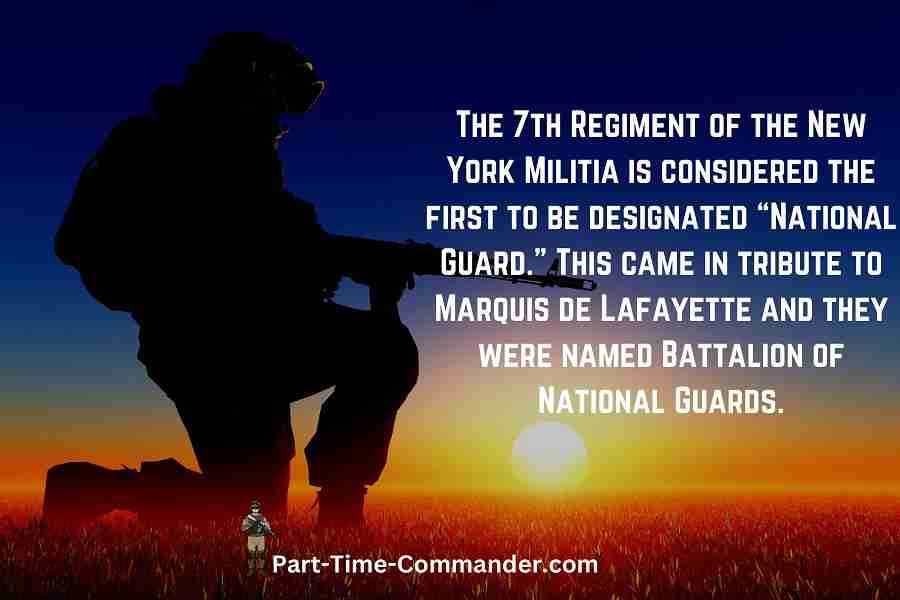 The 369th was formed in New York as part of the National Guard and as a means for African Americans to prove their patriotism. Known as the Harlem Hellfighters, during World War I, the 369th was attached with French forces where they gained great respect for their abilities. The 369th is one of the first units to have black officers as well as black soldiers. The first African American General, Benjamin Davis Sr. served with the 369th.

This brigade is a part of the Wisconsin National Guard. They were ferocious in piercing the Germans during World War I and that reputation followed along when the brigade was deployed to Iraq in 2004. They live up to the Red Arrow pointing forward as they devastate enemies. 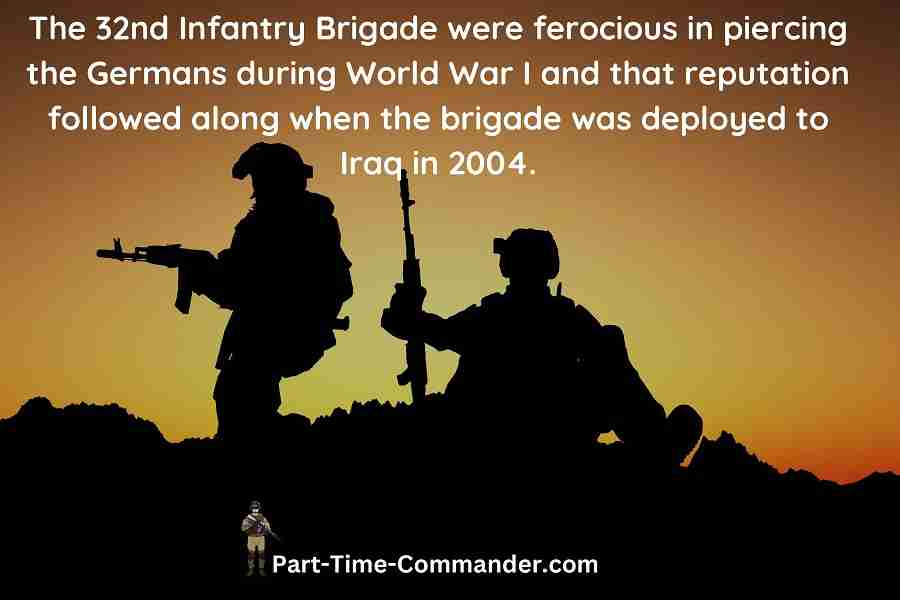 This infantry division was started back in 1917 as part of the Minnesota and Iowa National Guard. They still are. The 34th served with distinction in World War I, World War II and they have served in other wars and conflicts since. This division still operates and the Red Bull is a force not to be reckoned with.

The 34th Infantry Division was created from National Guard troops of Minnesota, Iowa, the Dakotas and Nebraska in late summer 1917, four months
after the US entered World War One. Training was conducted at Camp Cody, near Deming, New Mexico (pop. 3,000). Dusty wind squalls swirled daily
through the area, giving the new division a nickname: the “Sandstorm Division.” As the men arrived at Camp Cody other enlistees from the Midwest and Southwest joined them. Many of the Guardsmen had been together a year earlier at Camp Llano Grande, near Mercedes, Texas, on the Mexican border. ~ Military Historical Society of Minnesota

The Thunderbirds started in 1920 but they are recognized mostly as being one of the first units to be activated in World War II. Part of the Oklahoma National Guard, they were inactivated in 1968. But they had many Medal of Honor awardees along with multiple other awards. Most of these were as a result of World War II, but some were from the Korean War.

Based in Oklahoma City and one of the first National Guard units to be activated for World War II,  from the shores of France and all the way to Berlin liberating Dachau along the way, they later served in the brutal Korean War. The 45th Infantry Museum honors not just their service, but that of all Oklahomans. ~ The 45th Infantry Thunderbird Museum

With a long fighting history, the 40th is a National Guard unit serving California, Nevada, and other western states. They saw service in World War’s I & II, Korea, Vietnam, and has continued serving in the Middle East along with situations such as wildfires in the west. The Sunshine Division will continue to serve our nation with pride.

The Regiments of the Division took positions at Talasea on the northern side of the island, at Arawe on the southern side, and at Gape Gloucester near the western end. Neutralization of the enemy was effected by patrols. No major battle was fought. Heavy rain and mud were constant problems. The 40th was relieved of missions on New Britain, 27 November, and began training for the Luzon landing. Sailing from Borgen Bay, 9 December 1944, the Division made an assault landing at Lingayen, Luzon, under command of XIV Corps, on 9 January 1945. ~ U.S. Army

In conclusion, this is my opinion of the top 10 famous National Guard Units. What are your thoughts? Do you agree or disagree with my list? You can add your favorite units below. Again, all National Guard units deserve their honor and respect.

You may enjoy these posts too: