As we see the United States Army has started the process of issuing a new service pistol, I have decided to take a look through history and measure various opinions to determine what would be the top 10 Army pistols of all time. I am leaving the new pistol out of this top 10 list, but let me tell you what soldiers will now be carrying as sidearms.

In January of 2017, the United States Army determined the new sidearm will be the SIG Sauer P320. It will chambered with the 9 x 19 Parabellum which is NATO consistent. What many love about the new M17 is its great setup for either right or left-handed shooters. It is a modular design and can be fit to the user’s taste.

The M17 is a self-cocking striker-fired pistol with a double-action only trigger. It is a short recoil operated weapon, which fires with the locked breech. It uses the typical SIG Sauer cam-operated barrel. The slide is made of stainless steel. Frame is made of polymer. Slide hold and release buttons are ambidextrous. This weapon can be field stripped without using any tools. ~ Military-Today.com

We will watch and see how soldiers like this new sidearm. 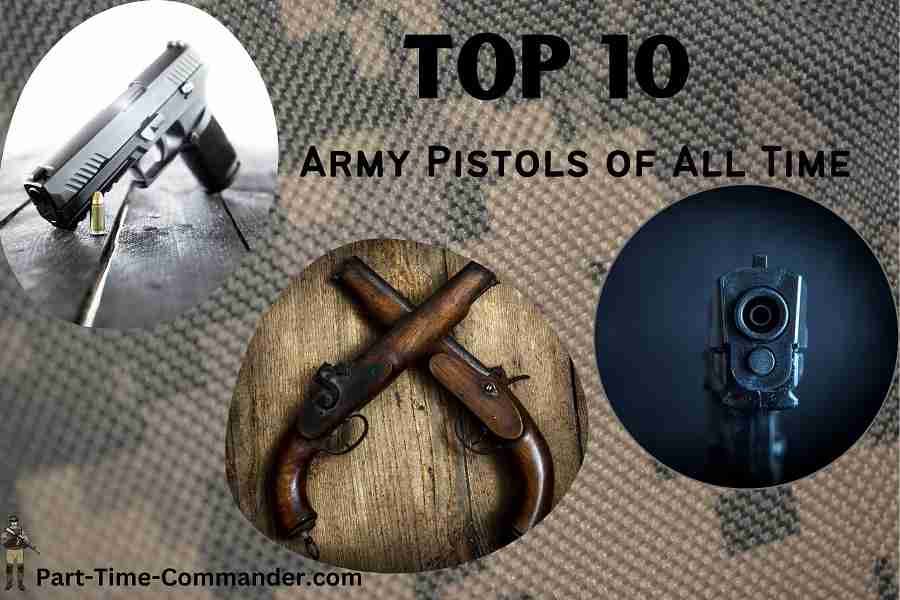 Now, let’s take a look at the top 10 Army pistols in history. I will start with #10 and work down to the #1 sidearm. Scroll down and see if you agree.

First made in 1848, Samuel Colt designed this .44 caliber sidearm that was primarily used by the U.S. Army Dragoon regiments. Produced up until 1860, these revolvers had an effective range of up to 80-yards. These guns were heavy at just over 4 pounds but packed a mean punch.

Rugged and hard-hitting, three distinct models were developed, and some were even outfitted with detachable shoulder stocks. The term “Dragoon” referred to mounted cavalrymen who used heavy, high caliber pistols such as this.  At a hefty 4 lbs. 2 oz., these revolvers were too heavy to be carried and were typically kept in holsters on the horse’s saddle. ~ Texas Ranger Hall of Fame and Museum

This was a flintlock that was a .54 caliber and manufactured at the Harper’s Ferry Armory in West Virginia. They were made until 1808 and since they were a single shot, soldiers were issued two. These great pistols are recognizable on the insignia of the U.S. Military Police Corps.

Harper’s Ferry was named after Robert Harper – a mill owner – who purchased the land from Lord Fairfax in 1798. This land was personally inspected and chosen by General George Washington as the site for an armory. An Act of Congress on April 2, 1794 established the Harper’s Ferry armory in Virginia.  ~ National Museum of American History

This is the gun that is called The Peacemaker and The Gun That Won The West. It was originally manufactured as a service revolver in 1872 but became so popular that all “gun slingers” were known to have a Peacemaker. The Colt M1873 was so popular that they are still being made in a third generation model. The first generation was manufactured up until 1941. The M1873 was made as a single action in .45 caliber.

US Army bought about 37 000 Colts of both Artillery and Cavalry flavors during period from 1873 and until 1893. Commercial production was ceased in 1941, with the outbreak of the World War 2, with about 370 000 guns made total. ~ Modern Firearms

How I would love to own one of these original guns… the Colt Army 1860 was made for issuance to Civil War soldiers and officers. It was a .44 caliber cap and ball that was a muzzle loaded 6-shot revolver. These sidearms were accurate at 50-yards give or take. Both Union and Confederate soldiers carried these revolvers.

This revolver has a naval engagement scene on its cylinder like the 1851 and 1861 .36 caliber models. It has a brass blade front sight and the rear sight is a notch cut in the hammer lip. ~ Western Kentucky University

Considered one of the first versions of the Colt New Service pistols, the Army Model 1909 was a double action revolver that was very popular. Many variations were made and these Model 1909 had a large production. The Colt Army Model 1909 came in .45 caliber.

In 1909, the Ford Model T had just come to market. The President of the United States was none other than Theodore Roosevelt, finishing his second term. His Great White Fleet had finished its voyage around the globe, announcing to the world that America had arrived as a seapower. ~ American Rifleman 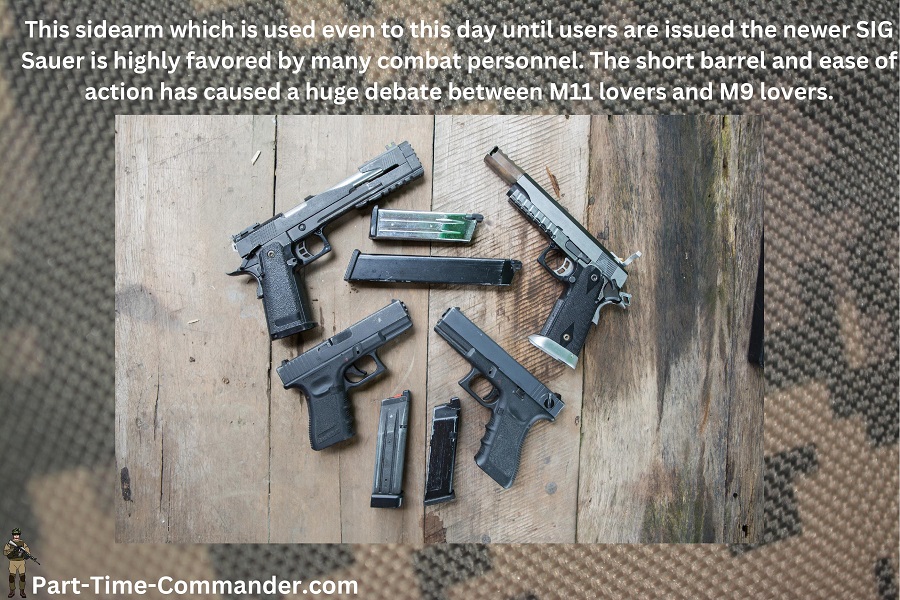 I mentioned the 1909 above and the Colt M1917 was essentially a better design of the 1909. The U.S. Military was suffering a shortage of the M1911, so Colt and Smith & Wesson began producing M1917 pistols to make up for supply shortages. It was made in .45 caliber.

Before World War I, the British had the Short Magazine Lee–Enfield (SMLE) as their main rifle. Compared to the German Mausers or U.S. 1903 Springfield, the SMLE’s .303 rimmed cartridge, originally a black powder cartridge, was ill-suited for feeding in magazine or belt-fed weapons and the SMLE was thought to be less accurate than its competition at longer ranges. ~ Wikipedia

The M1917 was used in many major wars including:

This beautiful pistol was designed from M1911 pistols in stock at the Rock Island Arsenal. About 1,000 of these pistols were made for high ranking officers. It had an elaborate finish and was engraved with General Officer’s Model and Rock Island Arsenal on the slide.

The General officers M15 pistol adopted in 1972 replaced the Colt 1903 and 1908 Pocket Hammerless pistols. It provided a weapon of greater stopping power and was more effective. Developed at Rock Island Arsenal from stock M1911 pistols, it was issued to Generals as a personal weapon. It is similar to the Colt Commander, but has internal differences. ~ The Military Memorial Museum

These .45 caliber sidearms were produced from 1972 to 1981. When an officer left service, they could purchase their sidearm from the Army.

The M11 is fed from double-stack 13-round capacity magazines. It is also compatible with 15- or 20-round magazines of the full-size SIG Sauer P226. Magazine release button is reversible. The M11 proved to be a durable, reliable and well-made weapon. ~ Military-Today.com

This sidearm is highly favored by many combat personnel. The short barrel and ease of action caused a huge debate between M11 lovers and M9 lovers. This gun was made in the NATO consistent 9 x 19 MM Parabellum rounds.

Some may say that the M9 Beretta should take top spot but when looking at overall acceptance by military personnel, I disagree. The M9 was put in as the primary military sidearm in the mid 1980’s and has been used in various conflicts and wars:

The Beretta also was made in the NATO friendly 9 x 19 MM Parabellum loads.

This legendary semiauto handgun has not only won the historic contract with the US military in 1985, but has achieved a triumphant contract renewal after more than two decades of hard use in the world’s toughest and most extreme conditions, from the scorching deserts of Iraq to the frigid heights of the Afghan mountains.  ~ Beretta.com

I believe many soldiers would opt to have one of the John Browning designed M1911A1 .45 caliber pistols instead of the 9 MM rounds. The original M1911 had a few small issues that were mended with the development of the M1911A1.

The M1911A1 .45 cal. pistol was the standard personal defense weapon carried by officers of all services during World War I, World Was II, and Korea. It has a rich military heritage, was very reliable, and the weapon of choice for use in close quarters. The M1911A1 pistol has been replaced by the more modern M9 9mm pistol. The M1911A1 had been the standard handgun issued to Marines for many decades. Selected weapons were modified in the 1980s to meet the requirements of the MEU(SOC) in lieu of arming them with the M9 9mm pistol. ~ Military Analysis Network

These guns are so sought after that Colt still manufactures the M1911A1. They are slim and easy to carry and the stopping power is amazing. Personally, this would be my choice of a weapon on my side in war. 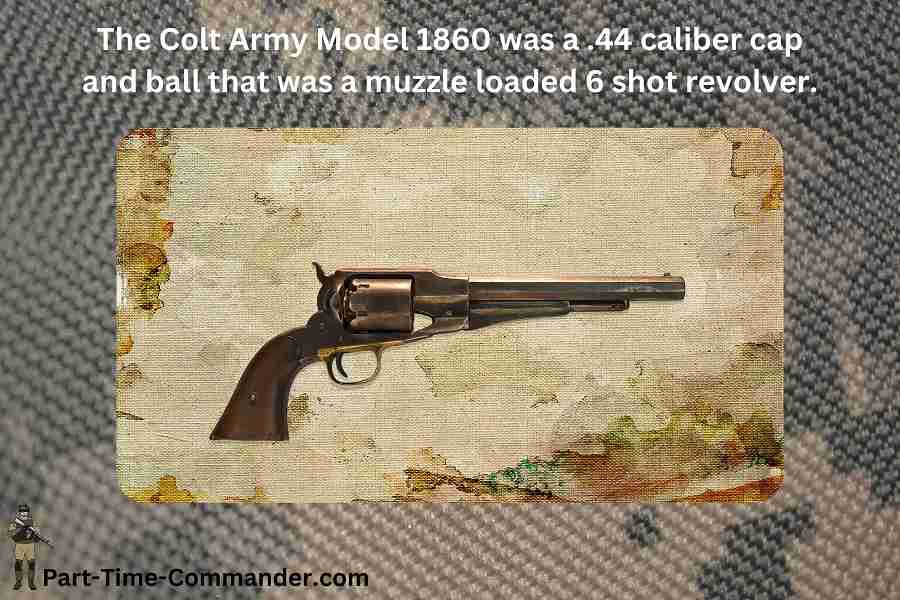 In conclusion, this is my opinion of the top 10 Army pistols of all time. I would love to hear your stories of any of the sidearms you have used or owned.

Do you believe the new SIG Sauer model will be a good addition, or are you like many who believe they should go back to .45 caliber? Let’s hear your thoughts and opinions. Just leave a comment below to let me know what you think. Thank you and have a great day.

You may enjoy these posts too:

What you see below is a book I recommend that I found on Amazon.