No matter how we look at it, every Army division that served in World War II performed to its utmost ability. In today’s post, I am going to provide my opinion of the top 10 Army Divisions in WW2, but please know that we feel a huge amount of gratefulness to all the Soldiers and officers who fought with guts, glory and honor during this war.

As I was not in World War II, this article demanded a huge amount of research. The many polls and opinions of others made this a very difficult article to put together. I am looking at many factors in the decision of the top divisions. These include:

Again I must reiterate, these are just my opinions. If you have a different opinion, we are happy to hear them in the comments section below.

These are my choices for the top 10 Army Divisions in World War II starting from #10 to #1. 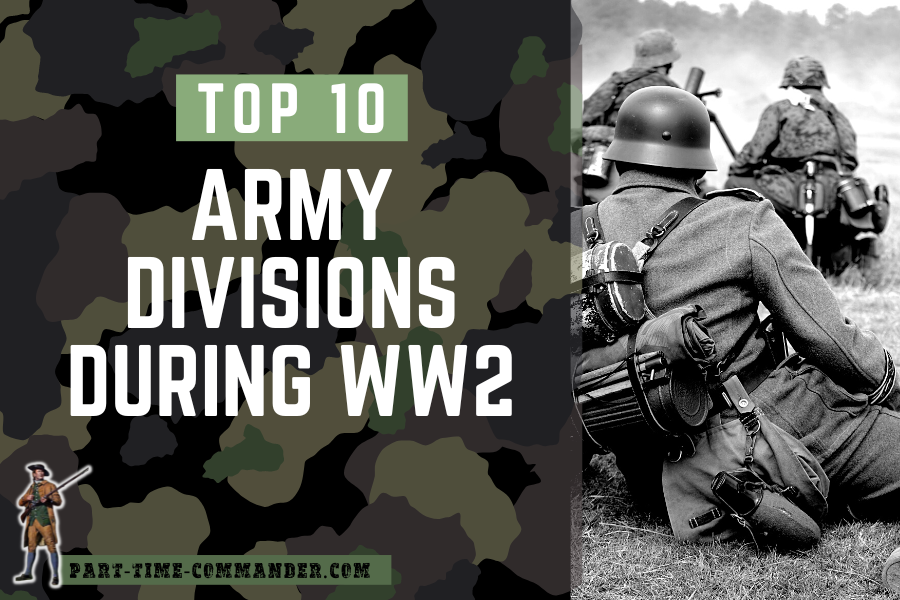 After earning several French awards, the 4th took a short break and when the Battle of the Bulge enveloped, the 4th raced into Belgium and was the first to breakthrough at Bastogne. This all occurred under the command of Major General Hugh Gaffney. It was thanks to the 4th Armored Division that the 101st Airborne found relief. The 4th Armored Division was the first armored division that was awarded the Presidential Unit Citation for their service in World War II.

This division was created during World War I but wasn’t deployed in that war. They were one of the first units to participate in ground combat in World War II. Under the command of Major General Manton S. Eddy, the 9th landed in North Africa and started their combat action. They moved into Sicily and captured both Randazzo and Messina.

After a short stint in England, the 9th landed on Utah Beach and they were some of the first troops to make their way into German borders. All of these troops were fighting machines. They had the second largest amount of casualties in the war at 23,277.

Activated in 1942 at Camp Polk, Louisiana, the 11th Armored Division was under the command of Major General Edward Brooks. Training was intense under this commander and when World War II began, Thunderbolt was ready.

In late 1944 the 11th landed in France and quickly fought its way into Belgium during the Battle of the Bulge. They were fierce during this battle and were soon trampling into Germany with their guns blazing.

It was the 11th that liberated Mauthausen concentration camp.

In mid 1944, the Angels were moved to the Pacific war zone. They first saw combat as normal infantry troops. Finally, under command of Major General Joseph Swing, troops parachuted in liberating Manilla and also raiding the Los Baños internment camp.

Many wonder if the 11th Airborne Division had not been used, would airborne troops be used today?

The 81st was activated in June of 1942 at Camp Rucker, Alabama. Knowing that these Soldiers would possibly face serious battle, they were trained hard and true.

In June of 1944, the Wildcat landed in Hawaii. Soldier’s first thoughts were fun in the Pacific sun, but that soon turned into a nightmare on an island of dirt. They were sent to combat on Angaur Island that was held by many pockets of Japanese troops. Fighting from one side to the other, the 81st filled the island with Japanese blood, but there was a large supply of Wildcat blood too.

The Screaming Eagles were a major force in World War II, and they still are today.

A brand new division in airborne warfare, the 101st were the first troops to enter D-Day. Actually, they didn’t arrive on D-Day; they dropped in the night before. If the drop would have went more as planned, many allied troops may not have died on D-Day. It wasn’t bad planning as much as bad weather conditions.

Though many of these paratroopers were dropped into unplanned territory, their skills in war had them still killing many German troops. Over 1,500 101st troops were killed or captured in that drop, but that didn’t stop them. They fought in many battles all throughout the war, earning a great place in World War II history. The Screaming Eagles earned 2 Presidential Unit Citations for all their accomplishments during World War II. 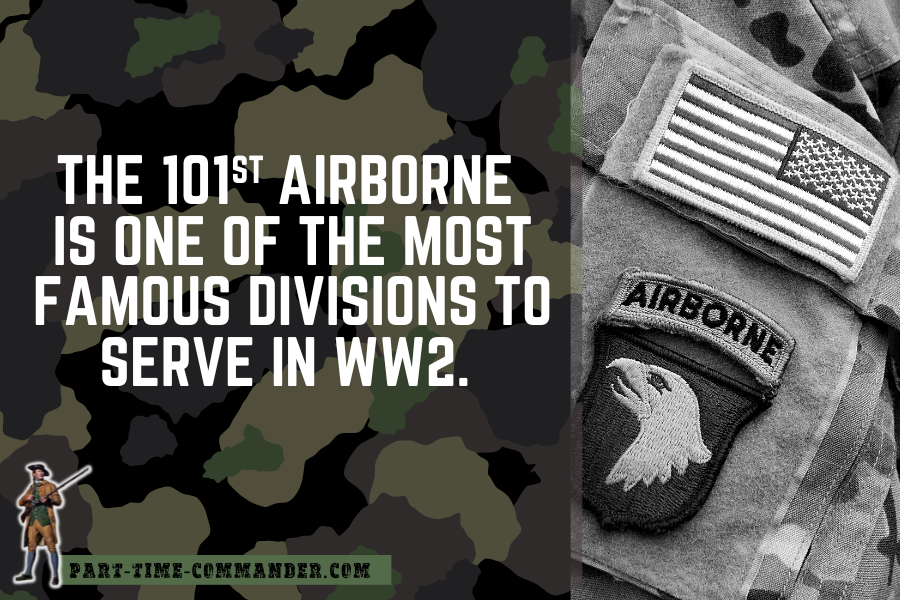 The 7th Infantry Division primarily consisted of Soldiers who were drafted during peacetime. Many of them were “ragtag” Soldiers, and were not easily trained. They were activated in 1940 under the command of Major General Joseph W. Stilwell.

Just after the Japanese attacked Pearl Harbor, the 7th Infantry’s base was Fort Ord, California. They were quickly mobilized to protect the West coast from possible attack.

There was much confusion with what should be done with the 7th. They were turned into a motorized division, and then back to an infantry division. In May of 1943, it was decided that Bayonet would go to battle. It was the snow and ice covered Aleutian island of Attu that these Soldiers first saw the war up close.

The inexperience and the terrible conditions found many of these Soldiers being shipped back in body bags. It was this experience that taught these Soldiers that they must fight, and fight hard.

The 7th went to the Kwajalein Atoll in early 1944. They put death and fear in the hearts of the Japanese, and took the island back from Japanese control. The 7th participated in many other battles all throughout the Pacific. They became a force to be reckoned with. Throughout World War II, the 7th had 3 Medals of Honor, 26 Distinguished Service Crosses, 1 Distinguished Service Medal, 982 Silver Stars, and many other awards.

Bayonet moved from “ragtag” to heroes.

When you think of the word tough, one of the first pictures that would come to mind if you lived in the days of World War II would be the 3rd Infantry Division.

The 3rd Infantry received its nickname from its solid war skills in World War I. This reputation held true into World War II and beyond.

Rock of the Marne were one of the few divisions that fought on every European front. They were part of invading North Africa, Sicily and Italy. These Soldiers battled their way through France and then into Germany. It was the 7th Infantry Regiment which was part of the 3rd that captured Adolf Hitler’s retreat in Berchtesgaden.

The great actor and Medal of Honor recipient Audie Murphy was a member of the 3rd Infantry Division.

If you have ever watched the movie Saving Private Ryan, it is an enactment during D-Day of the 1st Infantry Division landing on Omaha Beach. Within the first hour of the assault, The Big Red One sustained 30% casualties.

D-Day wasn’t this division’s start of World War II. They saw action in North Africa before that day. General George Patton specifically requested that The Big Red One be the primary invasion forces in Sicily because he knew just how ferocious these Soldiers were.

Another fact that many people don’t know is: The Big Red One is the oldest continuing division still in operation in the United States Army.

Whenever we see and hear stories about World War II, they are primarily about the fighting in Africa and Europe. The 32nd Infantry Division saw no battle in those locations, but they fought, and they fought hard.

Why do I put the 32nd in first place? Well I have a place in my heart for the National Guard, and before this war began, the 32nd was made up of National Guard units from Michigan and Wisconsin. These Soldiers were thrown into battle with less than stellar equipment. They were being sent to jungle warfare in the South Pacific using the long and heavy M1 Garands. They didn’t have the training time that was recommended, but they were fighters.

The 32nd was sent to Australia to help protect from Japanese invasion. There next stop was New Guinea. These soldiers fought all throughout the Pacific battlefield with an array of different commanders. They included:

The 32nd played leap frog with the Japanese and followed them to the Philippine Islands where the 32nd showed there power and strength. At Luzon, the 32nd was an extreme example of the American Army at its best. The 32nd captured General Tomoyuki Yamashita which cost the Japanese one of their best. The war was soon over.

You may, or may not agree with my choices here. Please share your opinion below. No matter what, all the Soldiers who gave their service and sacrifice deserve great honor and thanks; so if you see a WW2 veteran, tell them thanks.