In today’s post, we’re going to discuss the top 10 Army bases in the USA, as I see it.

In the paragraphs below, I am going to provide my opinion on the top 10 Army Bases in the USA. I will consider a variety of factors such as mission, size, location, number of Soldiers assigned, number of unit on site, historical significance, and much more. Keep in mind this just my opinion and we can agree to disagree. 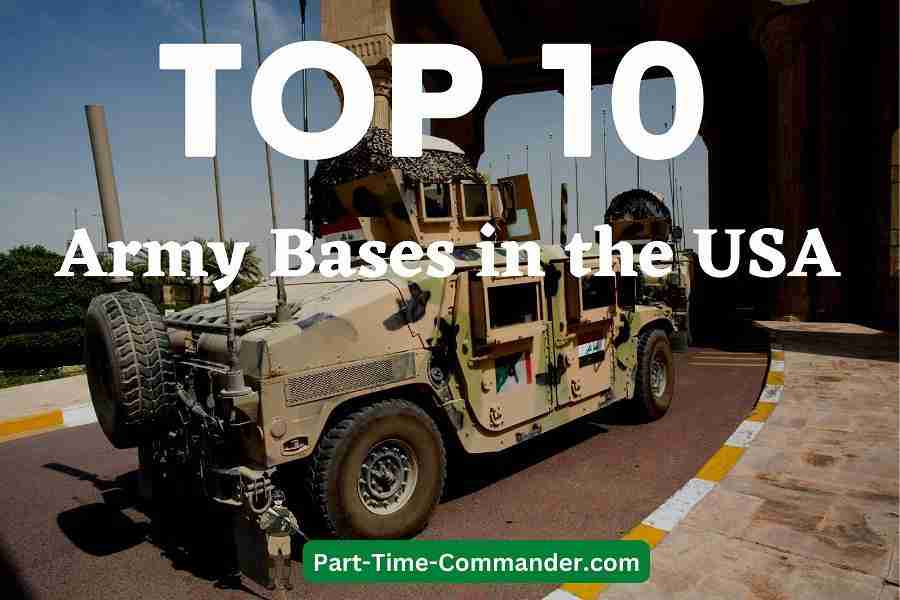 Top 10 Army Bases in the USA

So scroll down and starting at #10, I will provide the top 10 Army Bases in the USA:

The Headquarters of Fort Bliss are in El Paso, Texas, but part of the base enters the state of New Mexico. It is one of the largest Army installations in size at approximately 1,700 square miles. Fort Bliss employs over 18,500 people, and is the home of the 1st Armored Division. Fort Bliss was built in 1849.

Located in El Paso, TX, Fort Bliss is home to the 1st Armored Division. We are a FORSCOM installation comprised of other commands: MEDCOM, JTF-NORTH, TRADOC, USAR, and other elements. Fort Bliss is comprised of approximately 1.12 million acres of land in Texas and New México. The Main Cantonment Area of Fort Bliss is located adjacent to El Paso, Texas. ~ Military One Source

This Joint Base is still under control of the U.S. Army, and is merged with Air Force Base McChord. It is located south and west of Tacoma, Washington, and Fort Lewis alone covers approximately 86,000 acres. Built in 1917, this base employs approximately 18,900 people.

Fort Lewis, named after Meriwether Lewis of the famed Lewis and Clark expedition, is one of the largest and most modern military reservations in the United States. Consisting of 87,000 acres of prairie land cut from the glacier-flattened Nisqually Plain, it is the premier military installation in the Northwest. Fort Lewis is situated in a key location along Interstate 5, allowing easy access to Sea-Tac airport and to the deep water ports of Tacoma and Seattle. ~ Military.com

Fort Stewart is the largest base in area in the Eastern U.S. It covers 280,000 acres all in the state of Georgia. Fort Stewart and the Army also control nearby Hunter Army Airfield. Fort Stewart is home to the 3rd Infantry Division, and it employs approximately 21,500 people. This Fort was built in 1941.

Fort Stewart is described as a “world-class training, and military armored power projection combination” located in Hinesville, Georgia about 40 minutes from Savannah. This base conducts artillery training, as well as training for tank troops, helicopter gunners, and small arms. ~ Militarybase.net

Known for holding America’s gold supply, Fort Knox covers approximately 109,000 acres in the State of Kentucky. While the area has been used by the Army since 1861, the current Fort was built in 1918. Fort Knox employs nearly 22,000 people. There is much more to Fort Knox than just gold. Many Soldiers get top notch training at this installation.

Fort Knox is one of the most multifunctional installations in the Army.  The units and organizations here run the gamut from U.S. Army Forces Command warfighting units and Reserve component training units to commands such as U.S. Army Cadet Command and U.S. Army Recruiting Command, which are responsible for identifying, educating and recruiting the Army’s newest officers and Soldiers. ~ Army.mil

Fort Campbell covers approximately 102,000 acres. Its address is in Kentucky, but a large portion of this Fort is in Tennessee. Home to the 101st Airborne Division, Fort Campbell was built in 1941. There are over 26,000 people employed at Fort Campbell.

Fort Campbell came in the 1940s, ironically it was founded the same day as the Japanese fleet headed to attack Pearl Harbor. It became a training camp for rotating units during WWII.

It wasn’t until the 1950s that Fort Campbell became a permanent military installation. This base also served as a training ground for units during the Vietnam war as well. The famous 101st Airborne Division received permanent status here at Campbell in the mid 1970s. ~ My Military Base

I must admit that when I visited Fort Benning in Georgia and next to Alabama, I thought I had been sent to hell. It was the early 1980’s, and I was going to Basic Training. Fort Benning is the home of the infantry, and has become one of the premier training Forts. It covers approximately 182,000 acres, and employs almost 40,000 people. Even though it was hell while I was there, I highly recommend Fort Benning as the best Fort to receive Basic Training.

Fort Benning is located in an area commonly known as the “Tri-Community”, comprised of Columbus, Fort Benning, Georgia, and Phenix City, Alabama.

Columbus, known as Georgia’s third-largest city, is a growing community of 250,000.

Besides being the home of the Best Army Installation in the World, Fort Benning, Columbus is the corporate headquarters of many leading companies. ~ Military.com 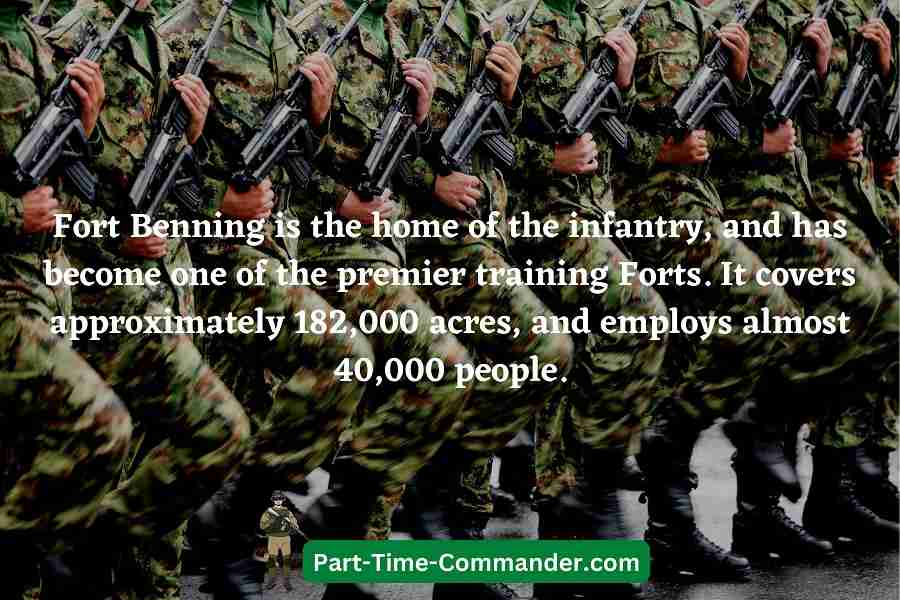 Fort Meade, which is located in the state of Maryland, is quite small in size only covering just under 8 square miles, but it employs a large amount of people. The last estimates showed over 41,000 were employed at this Army installation. The Defense Information School and United States Cyber Command are both located at Fort Meade. This Fort was established as Fort Admiral in 1917, but became Fort Meade approximately one year later.

Built in 1942, Fort Hood covers around 159,000 acres between Austin and Waco, Texas. According to census records, Fort Hood is the most populated Army installation in the United States. It is home to some of the Army’s top units including III Corps, 1st Army Division West, 1st Cavalry Division, and many more. Approximately 44,000 are employed at Fort Hood.

In the 1960s, Fort Hood deployed several troops for the Vietnam War. As the US ended the war ten years later, thousands of soldiers returned to Fort Hood for new commands. In 1969, Killeen became West Fort Hood. Many soldiers were injured when they finished their duty in Vietnam. The 1st Cavalry Division moved here from the Vietnam War in 1971 and came to Nicaragua to assist the earthquake in 1972. ~ HoodMWR.com

This fort, located in Vernon Parish in Louisiana, is named after the Confederate General Leonidas Polk. It covers 198,000 acres, and is a heavily used combat training location. What better place to train Soldiers in war techniques than the swamps and jungle areas of Louisiana. I know my Uncle was sent there before Vietnam, and it probably helped keep him alive. It is home to the Joint Readiness Training Center. Built in 1941, Fort Polk’s motto is Home of Heroes. Fort Polk employs approximately 44,300 people.

Fort Polk, the home of heroes and the best hometown in the Army, is nestled in the piney woods of west-central Louisiana. Fort Polk brings together small town living and the beauty of the great outdoors.

The area’s warm climate makes it a gateway to a wide variety of outdoor activities. Avid anglers can fish Anacoco and Vernon lakes or the 65-mile-long Toledo Bend Reservoir while catching their limits of bass, white perch, bluegill, or catfish. Deer, turkey, boar, squirrels, rabbits and other game give hunters reason to roam the woodlands. Families can enjoy hiking and camping year-round in the facilities that abound in the area.

Fort Polk is only minutes from the town of Leesville. You’re only hours from larger cities such as Dallas, Houston, Shreveport, Baton Rouge and New Orleans. Visitors can also experience the wonderful Cajun culture and customs simply by visiting south Louisiana. ~ Home.army.mil

Employing nearly 55,000 people, Fort Bragg is an easy pick for #1. Located on approximately 250 acres in North Carolina, it is one of the largest Army bases in the whole world. Fort Bragg is home to the United States Special Forces, the United States Airborne Forces, and U.S. Army Forces Command. Fort Bragg was built in 1918, and has been a staging point for many Soldiers from World War I up until the recent Wars in Iraq and Afghanistan.

By population, Fort Bragg is the largest Army installation in the world, providing a home to almost 10 percent of the Army’s active component forces. Approximately 57,000 military and 16,000 civilian personnel work at Fort Bragg. Every day approximately 74,000 military and civilian employees in careers ranging from trades and labor to engineers and attorneys provide the services needed to train, sustain, and deploy the combat forces to America’s Crisis Response Contingency Corps and Special Operations Forces. Their common daily focus is training, deploying, mobilizing, and demobilizing America’s strategic response forces and providing first-class services in such areas as retail, recreation, medicine, and education. Fort Bragg provides these services to a customer base of more than 260,000 soldiers, civilians, family members, and retirees. ~ CorviasMilitaryLiving.com

In review, this is my opinion of the top 10 Army bases in the USA. What are your thoughts? What would be your # 1 choice? Also, have you been assigned to any of the bases mentioned above? If so, what was your experience like? Leave a comment below to share your thoughts. I look forward to hearing from you. Thanks for your service.

If you’d like a good read about the top 100 military sites in America, I recommend you check out this book on Amazon.