In today’s post, I’m going to share what I believe are the worst jobs in the Army National Guard. Keep in mind this is simply my opinion and we can agree to disagree.

Also, if you take pride in what you do, and excel in your job, you can have a great career in the National Guard in any of these jobs.

When compiling this list, I visited military discussion boards, talked with former Soldiers, thought about my own military experience, considered day-to-day life for each MOS, work hours, career opportunities, and benefits of the job in a civilian career. 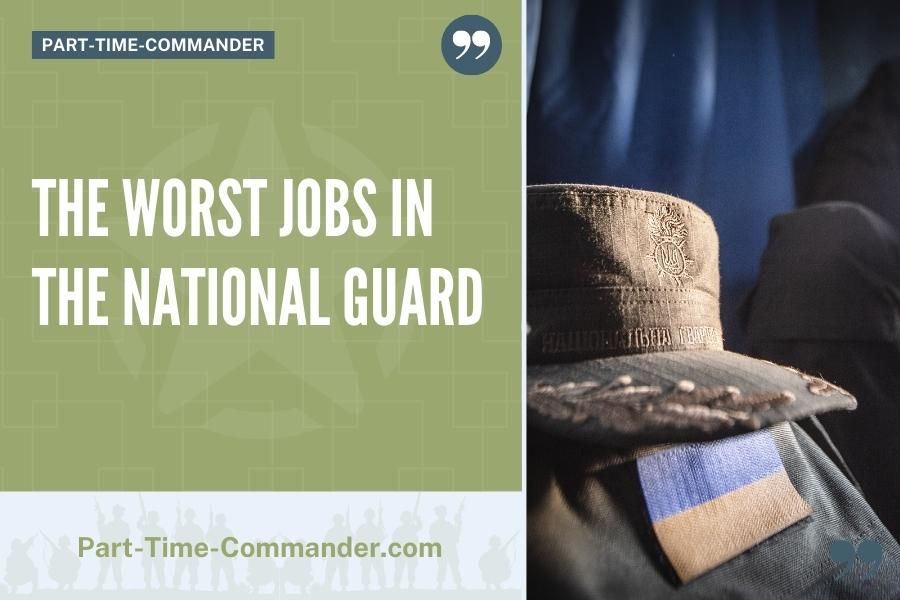 The Worst Jobs In The Army National Guard

What you see below are the jobs that no one really wants. Do keep in mind that because no one wants them, the Army National Guard is “pushing” recruiters to fill these jobs.

The cook has a job that many have no desire to take on. While the job is not really all that difficult, the hours suck. You will be up before most others and you will work late to ensure everyone has their stomach full.

As cooks in the U.S. Army, the days are long, hot, exhausting, and often thankless due to a menu and a set of recipes over which they have very little control, said Sgt. Brent E. Thomas, a food service specialist with Headquarters, Headquarters Company, 168th Brigade Support Battalion.

This was my MOS and I am proud of it, but I would never wish the job of infantry on any new recruit, unless I had a disgusting hate for them. The job is dangerous as hell since you are the first one in and you will walk, run, carry, and lift. It is muddy and sweaty and sometimes you will cry for your Mommy.

Since U.S. Army Infantrymen are the primary land defense for the branch of the military they regularly participate in shooting drills.

As a member of a fire team, you can expect to test your skills handling day and night shooting with several Army stables including M4 rifles, M230 machine guns, and M249 automatic weapons.

The Army continues to build upon its training for fire team members with more time in the field, including tactical training that focuses more on squad formations.

Land navigation is also a point of emphasis for U.S. Army Infantrymen.

This is the person doing those news briefs and such on radio and video. In a way, it could be a cool job, but on the streets of Baghdad or Kandahar? No thank you.

Remember, you are still wearing an Army uniform and your weapon is a camera or recorder. They will not stop bullets from an AK-47 or RPG.

Duties performed by Soldiers in this MOS include:

I know there will be some who scream foul saying this is a great job. The fact is, if you love oil and grease and filthy hands that will never get clean, this may be a great fit for you.

But, like the cook, the hours are long as you try to keep the stuff rolling. Long hours, endless dirt and grime, and officers yelling for their Hummer first. I think I would rather be an 11 Bravo.

Army Wheeled Vehicle Mechanics are depended upon to perform maintenance on an array of Army vehicles. The soldiers in this career field work on light wheeled vehicles, heavy wheeled vehicles, select armored vehicles, and any associated trailers or material handling equipment.

Soldiers may work on Humvee, Mine-Resistance Ambush Protected vehicles, and all types of diesel engines. The vehicles that they service and maintain are used for combat support, troop transportation, and a variety of other uses.

This position requires a high amount of physically intensive work.

Soldiers will complete diagnostic procedures on the vehicle to diagnose the issue. They use diagnostic and testing equipment to assist in finding the issue as well as driving or operating the equipment.

They will complete inspections and testing of the wheeled vehicle, material handling system, or subsystem/components. Once the issue is identified, the soldier will use a combination of equipment, power tools, and hand tools to perform the maintenance. ~ Operation Military Kids

All I can say Mr. Recruiter is NO THANKS! Dealing with death day in and day out does not sound like a career anyone would want. But there are some cut out for it.

I’ve been very fortunate to have some great jobs during my Active-Duty and Army National Guard Career. Obviously, my time as Platoon Leader, Company XO, and Company Commander were my favorite jobs. I had other jobs that I enjoyed, but didn’t love.

But, the worst job I ever had in the Army was as the G4 Plans Officer.

I disliked the job for a variety of reasons. What I disliked the most was the negative “work atmosphere” and that I spent most of my time reading OPORDs, interpreting information, and conducting MDMP in a small, outdated building. I just hated life!

I didn’t like that I had to spend all of my time doing paperwork, in isolation, and not being able to closely interact with the troops.

Naturally, I am a doer and a leader, so I dislike jobs where I sit behind a desk doing staff work. I’m happiest when I am the tip of the spear, working closely with the troops, and staying busy. Maybe some of you can relate to that, maybe not.

I spent about 7-8 months in the G4 Plans Officer job and can truly tell you that I survived day-by-day, sometimes minute-by-minute. I still gave it my best and did a good job, but I hated every minute of it.

Fortunately, my Senior Rater and Rater saw how miserable I was and moved me to a new job that better matched my strengths and skill-set. During all my time in Army (15+ years), this is still the worst job I ever had. However, I did learn a lot from that experience, and I’d like to share some of those lessons below. 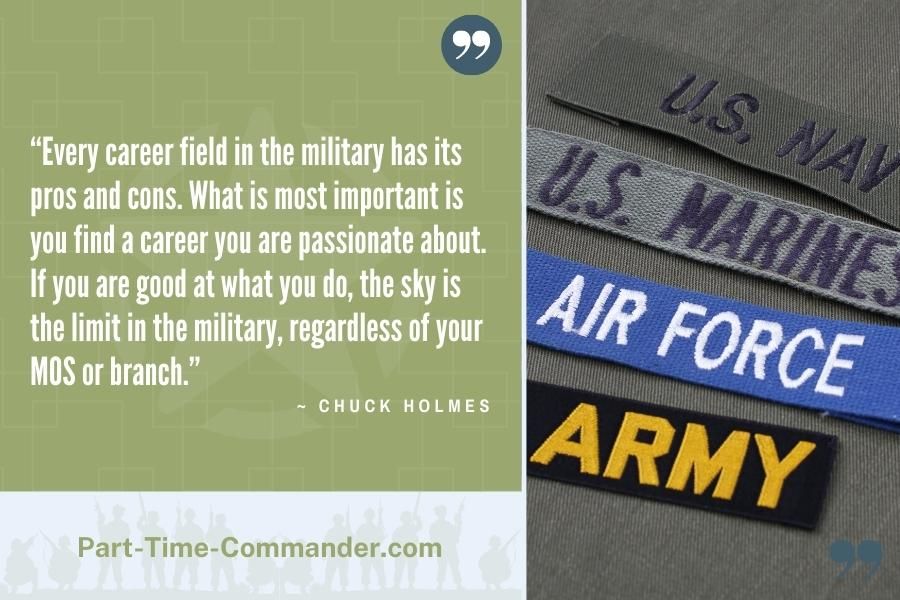 While you may not appreciate your time as Platoon Leader, Company XO, or Company Commander, you should. Without a doubt, your troop time will be your fondest memories in the military (hopefully).

Your time at the small unit level is very fulfilling and challenging. In fact, just about every senior officer I know cherishes their troop time more than any other assignment.

Lesson # 2: You Can Learn a Lot From Jobs You Hate

You can learn a lot from jobs you hate. During my time as the G4 Plans Officer, I did learn a lot of stuff about leadership, staff work, and the big picture Army. More importantly, I learned that people naturally do better in jobs that they enjoy.

Lesson # 3: You Won’t be in the Same Job Forever

You won’t be in your current job forever. Fortunately, the Army moves us officers around a lot, typically every nine to eighteen months. The NCOs stay in a job longer than officers do (typically). Even if you have a job you dislike, try to stay positive and remember that you won’t have that job forever.

Lesson # 4: Bad Jobs Give You Perspective

You won’t know what a great job is, if you’ve never had a bad job. If you’ve had a job that you HATE, it can truly help you appreciate a good (or okay) job you enjoy, even more. When you have a good job, working with good folks, make sure you cherish the memories. Never take it for granted.

And the Big Lesson…

Ultimately, it’s the people you work with that have the biggest impact on your enjoyment in the job. This includes your supervisor, direct reports, and peers. You could land your dream job only to find out that you have a crazy, disgruntled boss who desires to make your life miserable. Or, you could find a great job you think you will love, only to be surrounded by incompetent, miserable people.

The biggest takeaway is that the atmosphere is everything. I’d rather work with great people in a job I hate than in a good job with people I can’t stand. How about you?

If you plan on making a career out of the military, you’ll probably have somewhere between eight and fifteen jobs during your career. Some of those jobs will be incredible, some will be okay, and one or two will probably be horrible.

It’s your job to learn from each experience and always do your best. What about you? What was the worst Army National Guard job you ever had and why? Leave a comment below to tell me your story. What made the job so horrible? I look forward to hearing from you.