In today’s post, I’d like to discuss the role of horses in the Army by sharing 20 cool facts.

When considering the current operations of the United States Army, horses are rarely considered. But there was a day when horses were quite important to operations in the U.S. Army. I would say they had the importance that is now given to tanks or troop carriers. 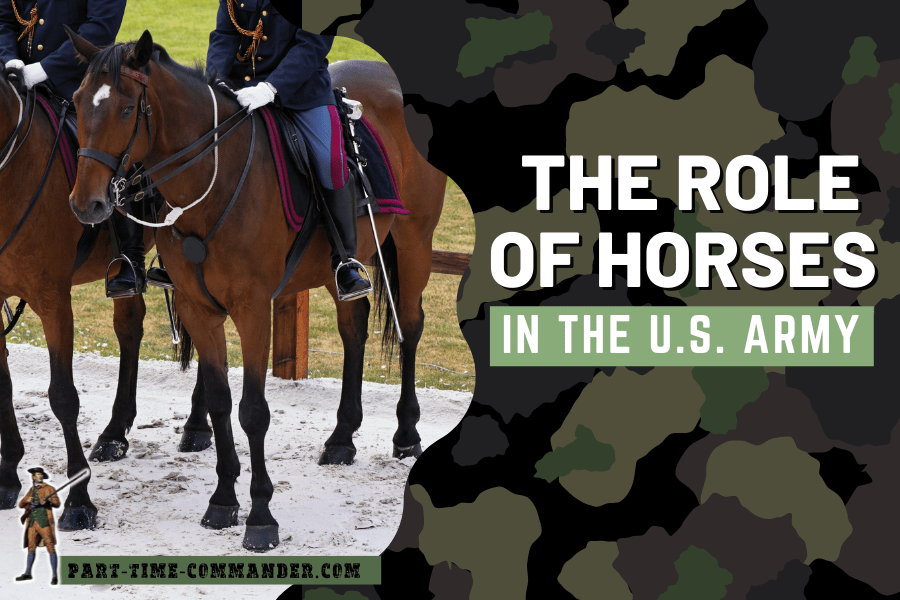 The Role of Horses in the Army: 20 Cool Facts

What you will find are 20 cool facts about the role of horses in the Army (and military). Any sources I used are properly cited. Enjoy.

Realizing that the natives could handle horses in battle with skill and precision, the U.S. Army employed some Indians to help train Soldiers on the different methods of handling weapons and their horses in wars and battles.

While some horse troops were used during the Revolutionary War, the primary method was on foot. There were no actual Cavalry or Horse units. In 1792, Congress approved Cavalry units known as Dragoons. During the War of 1812, the U.S. Army employed the 1st and 2nd U.S. Dragoons.

There is some confusion about the differences between Cavalry and the Dragoons. Hopefully, this clarifies things:

One of the differences between the dragoons and the cavalry was the dragoons rode horses for mobility but for the most part they dismounted when they went into action, using their carbines or musketoons. However, they were armed with sabers and thus were trained to fight both mounted and dismounted. Cavalry did most of their fighting on horseback.

By the late 1850s, the army had two regiments of dragoons, one regiment of mounted riflemen, and two regiments of light cavalry. To simplify matters, in 1861, all of the mounted regiments were redesignated or renamed cavalry, thereby ending the era of the dragoon. ~ NPS.gov

As people decided to move West, the need for protection was determined for these settlers. It made no sense to use foot troops to protect these people. In 1832, the United States Mounted Ranger Battalion was formed to be the security for settlers on the Santa Fe Trail. It was only in existence for one year and was disbanded due to “high cost” and “poor discipline.” The Mounted Rangers were replaced with a Dragoon Regiment in 1833.

It was decided just before the Civil War that Dragoons would now be deemed Cavalry. Both Soldiers and officers did not like this change, and they kept their Dragoon uniforms until they wore out and had to change to the Cavalry yellow uniforms.

# 6: Horses Were The Most Important Military Tool In The Civil War

Horses held a high level of importance when the Civil War broke out. While earlier wars used horses, this war put the horse as a “must have” tool just. Horse Regiments were numerous during the Civil War. More than ONE MILLION horses died in the Civil War.

The Civil War is not normally called a horse’s war, but it most certainly was: cavalry and artillery horses, draft and pack horses and mules, approximately one million on the Union side alone. The seat of war was also the lap of America’s horse culture – or, rather, cultures, north and south. ~ Earth in Transition

During the Civil War, artillery and supply units had multiple horses and mules to transport supplies, and to pull the guns where they were needed.

During the Civil War, the Union supplied troops with horses, but the Confederacy required that troops supply their own horses. Many Confederate Soldiers were allowed to keep their horse at the war’s end.

During the Spanish/American War, only officers were allowed to be mounted on horses. This is because of the transport of the animals to Cuba.

Horses were used for many different things during WW1 to include logistical support, reconnaissance, pulling artillery guns, carrying supply wagons, and pulling medical ambulances. Over 8,000,000 horses were killed during World War I, such a tragedy.

The presence of horses often increased morale among the soldiers at the front, but the animals contributed to disease and poor sanitation in camps, caused by their manure and carcasses. The value of horses and the increasing difficulty of replacing them were such that by 1917, some troops were told that the loss of a horse was of greater tactical concern than the loss of a human soldier. Ultimately, the blockade of Germany prevented the Central Powers from importing horses to replace those lost, which contributed to Germany’s defeat. By the end of the war, even the well-supplied US Army was short of horses. ~ Wikipedia

Horses began to be phased out of the U.S. Army towards the end of World War I. Many of their roles were replaced with tanks and motorized vehicles.

# 12: World War II Had Only One Cavalry Unit

During World War II, the United States Army had only one Cavalry Unit… the 26th Cavalry.

At the start of WWII, the 26th Cavalry (PS) fought the Japanese at the shores at Lingayen Gulf. It was here that Sgt. Dan Figuracion fired his M1 Garand, the first American soldier to do so in combat. From there, the regiment conducted delaying actions until the Filipino and American forces made it to the Bataan Peninsula. On Bataan, the 26th Cavalry (PS) conducted much needed offensive actions on horseback, including the last cavalry charge in U.S. Army history, led by Lt. Edwin Ramsey.

The regiment earned three Distinguished Unit Citations and one Philippine Presidential Unit Citation. The Army awarded 37 decorations for valor to the officers and enlisted men of the regiment, including 5 Distinguished Service Crosses, 28 Silver Star Medals, and 4 Bronze Star Medals. After a hard-fought defense, the 26th Cavalry (PS) surrendered to the Japanese on April 9, 1942. ~ Philippines Scouts.org

General Patton truly believed in the use of horses in warfare. This is a quote from this great leader:

Had we possessed an American cavalry division with pack artillery in Tunisia and in Sicily, not a German would have escaped.

The last horse Cavalry charge was in January of 1942 by the 26th Cavalry at Bataan, Philippines.

The last charge by horse, but not with a unit considered Cavalry was in April of 1945 by The 10th Mountain Cavalry Reconnaissance Troop.

Did you know that a horse was the lone survivor at the Battle of Little Big Horn? I didn’t until I stumbled across the information you see below online.

The warhorse known as Comanche is known as the sole survivor of General George Custer’s command at the Battle of Little Bighorn. A burial party investigating the battle site found the horse severely wounded but still alive, and transported the horse 950 miles to Fort Lincoln. Comanche spent the next year there recovering and was never ridden again. In fact, orders were given excusing the horse from all duties. ~ FallenHeroesFund.org

Found at Fort Myers, Virginal, the Caisson Platoon is well-known for the horses. It’s a combat-ready unit but has become the ceremonial face of the Army. The unit participates in military funerals, public events and renders honors.

During war in Afghanistan, Army Special Forces did use horses in the mountain terrain.

Modern Cavalry units still recognize their days of horses with several traditions including:

There have been some names that are well-known that were U.S. Cavalrymen. Here are some:

In conclusion, these are 20 cool facts about the role of horses in the Army (and military). Personally, I love horses. They are beautiful, smart, magnificent creatures. It’s wonderful to know they played a vital role in our military history, especially during combat.

What are your thoughts about the role of horses in the Army? Leave a comment below to let me know what you think. I look forward to hearing from you.

Here are a few military horse and Cavalry books I recommend from Amazon.