In today’s post, I will provide an overview of the Joint Service Commendation Medal.

While there is a high degree of competition between the branches of the United States military, there is also a long standing agreement to work together jointly to defend and protect the United States and her citizens. Ever since 1993, we have found an even greater cooperation between the military services. The reason for this was Base Realignment and Closure. A large amount of military bases were combined and renamed as joint bases. Some of these include:

These are just a few…there are many more. While at war in Iraq and Afghanistan, smaller Joint bases were normally established. It is imperative that our military forces work together, and they can do that better if they are in close proximity to each other. 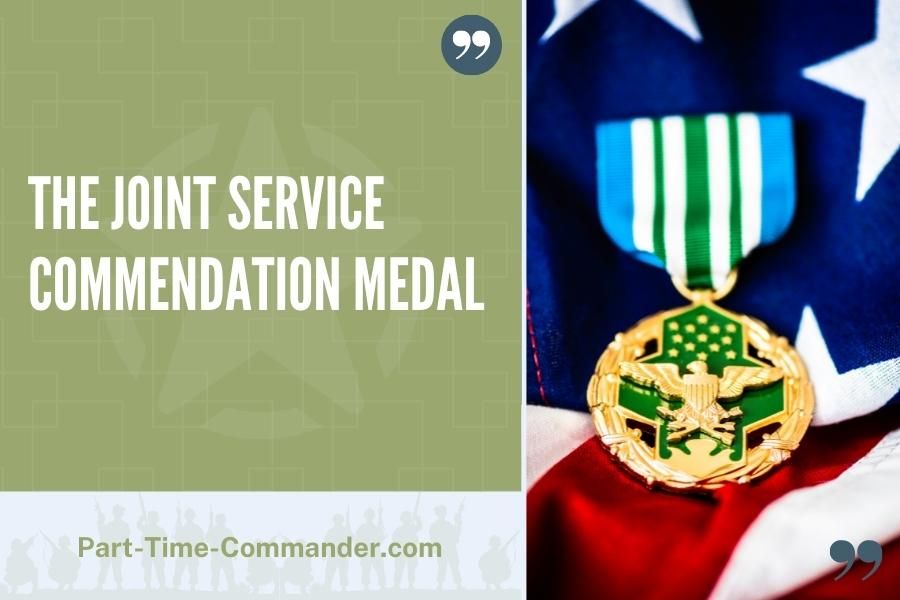 In the paragraphs below, we are going to look at a medal that was established recognizing service people who went above and beyond while serving in Joint service. This is 10 things you should know about the Joint Service Commendation Medal.

Robert McNamara who was the Secretary of Defense during both the John F. Kennedy and Lyndon Johnson administrations, established the Joint Service Commendation Medal. This was done on June 25th, 1963, but was effective from January 1st, 1963.

A laurel wreath encircles the green enameled hexagons. They are four hexagons joined together representing joint military service. The top hexagon has 13 stars and in the center is the Eagle from the seal of the Department of Defense. The Eagle is grasping three arrows and has a shield on its breast. The wreath and outer edge of the green enamel is gold. The ribbon holds stripes of green, white and blue. On the back is the inscription: For Military Merit. Between Military and Merit is a place where the recipient’s name can be engraved.

5: If a Bronze Star cannot be awarded

The Joint Service Commendation Medal is awarded for valorous actions against an enemy, but not to the extent of justifying the award of a Bronze Star. Essentially, this award is just below the Bronze Star.

If the Joint Service Commendation Medal is awarded to a service member who received it due to his/her actions in combat operations, a “V” device will be given also to be put on the ribbon. This shows that it was during combat operations.

7: More than one award

The Joint Service Commendation Medal can be awarded to foreign military personnel who were assigned to Joint staff commands. They had to distinguish themselves with meritorious actions or service. This procedure was allowed after February 6th, 2006. 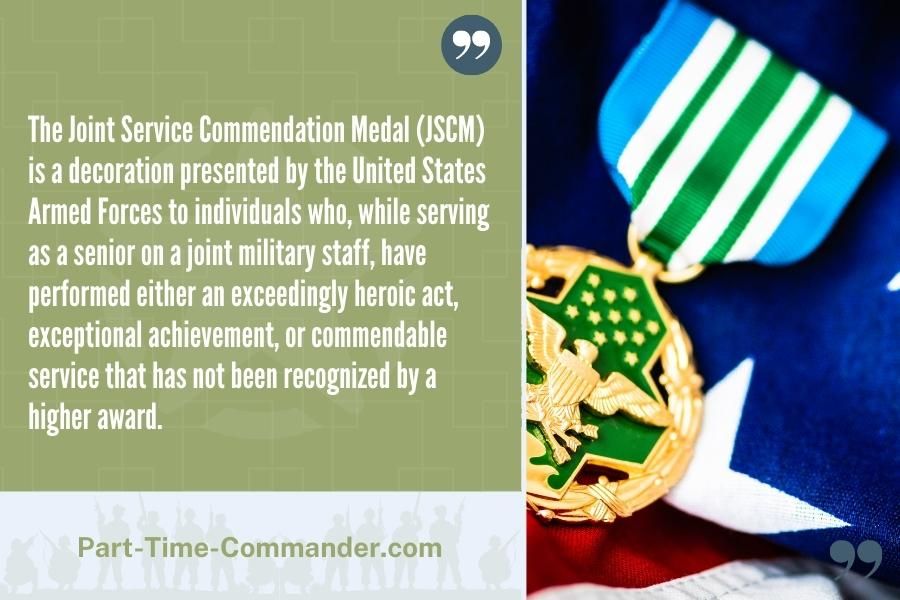 Commanders can recommend military personnel for this distinguished award. Here is a sample:

Major Jason Richards, United States Army, distinguished himself above and beyond his call of duty with exceptional meritorious service on or about June 16th, 2009.

In service with Special Operations Joint Task Force-Afghanistan, Major Richards was contacted about a Mi-17 which had crash landed just 3 kilometers from his site. With the knowledge that enemy insurgents could utilize key components of the military vehicle, Major Richards made quick and decisive decisions to first send a team to guard the downed helicopter. He then proceeded to use his leadership skills in the recovery of the downed rig. During the recovery operations, a firefight ensued with terrorist elements.

Due to Major Richards’ solid and quick thinking, United States Army equipment and personnel were evacuated, and 4 insurgents were killed in the process.

The leadership accomplishments of Major Richards reflect great credit upon himself, SOJTF-Afghanistan, and the United States Army.

This should have a cover letter attached explaining what award the service member is recommended for, his/her name and serial number, operation, his/her duty, and previous awards. It should also have contact information for the commander who is writing the recommendation.

I believe as time proceeds, we will find more of these medals awarded, because Joint Operations are very common in today’s military. What are your thoughts? Please tell us in the comment section below. I look forward to hearing from you. Hooah!

2 thoughts on “The Joint Service Commendation Medal: 10 Things You Should Know”