In today’s post, I’d like to cover what I believe are the top 5 most important jobs in the Army. Of course, this list is just my opinion. By all means, we can agree to disagree.

First and foremost, every job in the Army is important. The Army is a team sport. We all rely on each other to accomplish our overall mission. Regardless of what job you have, always do your best.

It’s not politically correct to say that some jobs in the Army are more important than others, but it sure does make an interesting blog post. 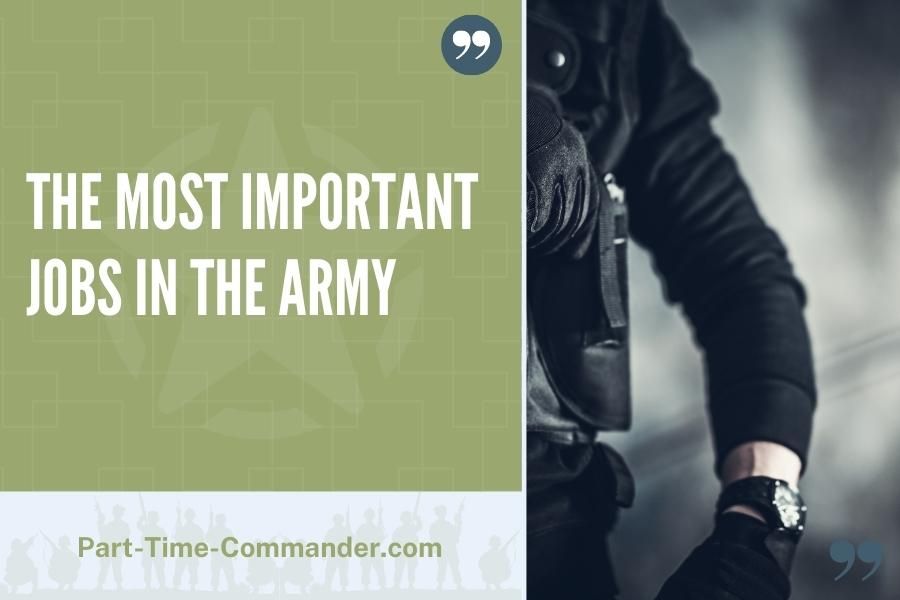 Top 5 Most Important Jobs in the Army

In the paragraphs below, I’ve done my best to rank the top five most important jobs in the Army. This information was compiled from personal experience, interviews, and online research. I’ll start with # 5 and work my way down to # 1. Let’s begin.

Recruiters have a very important job in the Army. Without recruiters, there wouldn’t be Soldiers shipping out Basic Training and filling the Army’s ranks. Recruiting is a tough job, especially in today’s world. A good recruiter is worth A LOT of money to the Army. Recruiters screen candidates, conduct interviews, coordinate and set up ASVAB testing, and counsel potential candidates on their career options. They work long hours, including many nights and weekends.

More importantly, recruiters have more “interaction” with the public than any other job in the Army. They deal with the public on a daily basis. Their character, personality, actions, and professionalism can either help or hurt the Army’s overall reputation.

Drill Sergeants transform recruits into Soldiers. This is a HUGE job with an enormous responsibility. In most cases, the Drill Sergeants are the best-of-the best within the NCO Corps. They put in long hours and do whatever it takes to get the job done. If you’ve been to Basic Training before, I’m sure you still remember the names of your Drill Sergeants (mine were Maxwell, Medina, and Maldanado). That just goes to show you how influential they were.

As a drill sergeant you are responsible for coaching, counseling, and mentoring of hundreds, if not thousands, of Soldiers as you transform them from a civilian to a combat-ready Soldier. A typical day as a drill sergeant starts before dawn and you are with your Soldiers until it is time for lights out. ~ Official Army website

While it’s not a specific job per se, the NCO Corps runs the Army. They are the backbone of the Army. As a former officer myself, I’d like to give officers some credit, but without the NCOs we wouldn’t even have a job. NCOs handle all aspects of the day-to-day operations in the Army. NCOs enforce standards, train Soldiers, advise officers, complete missions, put out fires, and just about anything else you can think of.

NCOs are responsible for communication between soldiers, the unit, and their officers. They maintain and enforce established standards, support and implement policies established by the chain of command, and they must know what’s going on in their soldiers’ lives. ~ AUSA

Team Leaders have the most important leadership job in the Army, as I see it. They are where the rubber meets the road. Team Leaders typically work with three to five Soldiers and they handle 99% of the Soldier issues. Team Leaders are first line leaders. They normally hold the rank of Corporal or Sergeant and typically have two to three years experience in the Army.

Team Leaders have a direct impact on the training and success of his/her subordinates that he/she is charged with taking care of. As a Team leader, you have duties and responsibilities which include leading and taking care of your Soldiers. A Team Leader does this by developing a genuine concern for their well-being. A leader must understand their Soldiers well enough to train them to a high level of proficiency as an individual and to bring the skills of each soldier together to function efficiently and effectively as a larger unit and to have confidence in their ability to perform well under difficult and demanding situations. Successful accomplishment of unit missions begins at the individual level and the supervisor of those individuals; the Team Leader. ~ NCO Worldwide 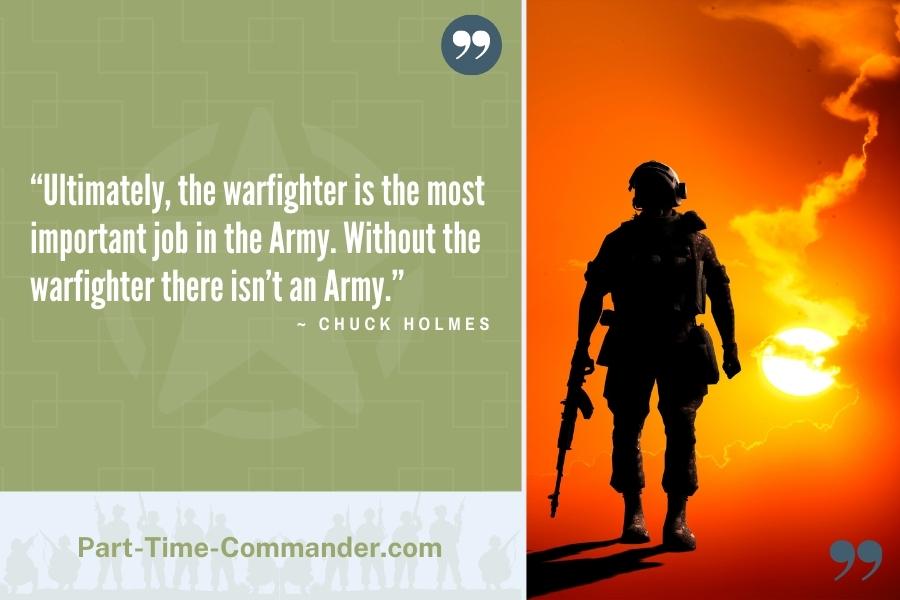 Nope, I’m not a grunt, and never have been, but I have the utmost respect for these guys (and gals). Why? Because at the end of the day it’s up to them to fight and win our nation’s land wars. Yes, it is a combined team effort. Yes, the grunts can’t do much without the support of everyone else. I understand that. But pretty much everyone else in the Army exists to support the infantrymen. Many folks don’t like to admit that, but it is the truth.

It’s the infantryman that will be boots on the ground securing the objective. It’s the infantry that will fight hand-to-hand against the enemy. For that, I salute you and put you in the top position on this list of the most important jobs in the Army.

In summary, these are the top five most important jobs in the Army as I see it. Once again, the Army is COMBINED TEAM effort. Just because I didn’t put your job on this list doesn’t mean that I don’t think your job is important. Whatever job you have, do it with pride and excellence!

What are your thoughts? What do you think is the most important job in the Army and why? Leave a comment below to share your thoughts. I look forward to hearing from you.

15 thoughts on “The Five Most Important Jobs in the Army”