In today’s post, we will provide an overview of the Space Operations Badge. A badge that multiple United States Army soldiers and officers where with pride.

As I was researching websites and literature for this article, I caught myself daydreaming of a new Army. An Army much like Captain Kirk and Spock on the Starship Enterprise. Is that the direction our Army is moving? Dare I say, yes it is.

The Army has always had a hand in the controls of space, and as technology moves forward, the Army is also moving forward knowing that space is the realm where defenses of freedom and America will need to be evident.

Why Space For The Army?

When you consider the many news items from the past of astronauts and rockets traveling to the far reaches of space, you would often hear United States Air Force after the names. Many people do not realize that the United States Army actually uses more space related items than the Air Force does.

I primarily speak of satellites and such. Because of this, the Army needs soldiers and officers who are trained in space related subjects. Add this to the fact that technology is moving at such a pace that our defense forces need to be prepared for space.

History of the Space Operations Badge

It started as the Air Force Space and Missile Badge. Army officers who graduated from the Army Space Operations Course were allowed to where this Air Force badge.

In 2004, the badge changed designs and became just the Air Force Space Badge. In 2006, authorization was given that any Army personnel who met certain guidelines could also be awarded the badge.

The first Army soldier to attain this badge was an NCO with the Army Central Space Support Element whose name is SGT Daniel Holscher. After that, many of these badges were awarded to Army personnel.

In 2011, in a joint agreement, the Air Force and Army agreed this should be a joint badge and they dropped the Air Force from the name. It became the Space Badge. In 2014, General William Shelton of the United States Air Force ordered the badge renamed to Space Operations Badge.

Looking back, one could presume that much of the need for professionals in space related subjects came at the call for the “Star Wars”, or Strategic Defense Initiative that came to light during the Reagan Administration. Yes the SDI was dissolved, but that doesn’t mean that the United States Department of Defense has put the whole matter into a closet.

The Secretary of Defense ordered that each branch of the service must develop a cadre of professionals both military and civilian, that represent that service’s interests in space operations and any other matters related to space. These professionals must be of sufficient quantities.

The Army has many space related programs and ventures. At this moment in time, it is estimated there are over 2,300 soldiers and civilians working in space related jobs throughout the Army and joint related organizations. These are divided into 3 areas:

There are 3 Space Operations Badges that can be attained by members of the Army, Army Reserve, and the Army National Guard. Those badges are:

Members of the Army must complete the appropriate training and gain space cadre experience to be awarded a Space Operations Badge. For active duty, the amount of time as a cadre to receive the basic badge is 12-months, senior badge is 48-months, and the master badge is 84-months. 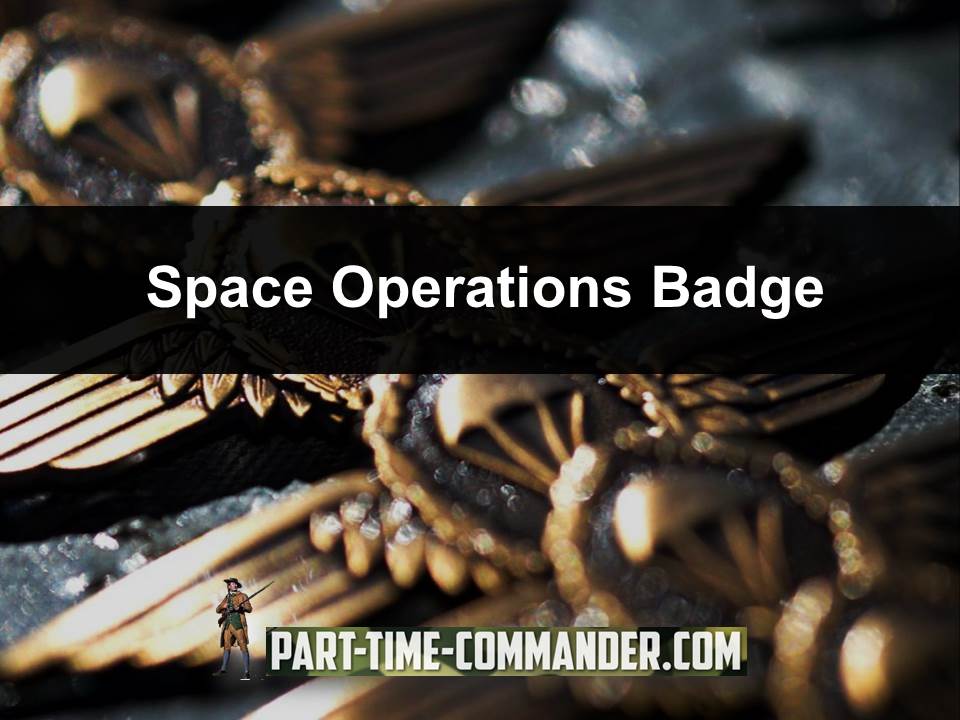 You might be wondering, what is an Army FA-40? What do they do? What is their duty description? Here is what I found online, along with the sources.

As the core of the Army space cadre, FA40s provide in-depth expertise and experience to leverage space-related assets which deliver space capabilities to the Warfighter today as well as develop and integrate space capabilities for the future. ~ Source

Soldiers are selected for the FA40 after a competitive selection process through the Voluntary Transfer Incentive Program, or VTIP, which can occur at the four-year mark of a Soldier’s career. Besides their technical abilities, Soldiers applying for the FA40 are also evaluated based on their values and leadership capabilities.

The Army has a strong amount of locations that are studying and utilizing space. As an officer or soldier going into a space related field, you could be sent to any of these locations or others:

The National Guard also has several space related facilities that include:

I am reminded of the start of every Star Trek episode: Space…The Final Frontier! The Army is keeping pace with technology and staying up in the clouds and stars.