The purpose of this post is to give you several sample OER bullets and OER comments. These comments will benefit someone writing an OER for someone else or for someone preparing their own OER and/or OER Support Form.

Please keep in mind that OER Comments are different from NCOER Comments. Comments on the OER are typically in paragraph form rather than bullet points like the NCOER. Prior to writing an OER, do your due diligence. Brush up on AR 623-3, or even better, take your S1 out to lunch and pick their brain! They are a wealth of knowledge!

It’s your job to manage your own Army OER and to manage your own career. No one cares about your military career as much as you do. If you aren’t proactive throughout the entire OER process, you are setting yourself up for failure and disappointment. That means that you must actively communicate with your supervisor throughout the OER process, not just when it’s due.

You should make your rater’s job as easy as possible. To do so, you should prepare your own Army OER Support Form and even write the first draft of your own OER. To some of you, that might sound crazy. From personal experience, I can tell you this works great.

Your boss is busy. They probably supervise several officers and NCOs. They have a lot on their plate. If you can make their life easier they will appreciate it.

I’ve also found that in most cases, they will use the EXACT OER shell that you write. So write well young grasshopper. Getting the OER you want and deserve might depend upon it!

If your rater asks you why you drafted a first draft of your own OER, tell them you “knew they were busy and you just wanted to make their job a little bit easier.” Personally, I’ve never had one “boss” be upset by me doing it. However, you know your boss better than I do, so use your own judgement.

One of the most important counseling tools you have is your NCOER or OER Support Form, also known as the -1A.  Most individuals don’t understand the process and have difficulty filling these forms out.  Properly completed these forms provide  you a current status of what type of evaluation report you will receive.  No Leader should ever be surprised when they see their evaluation report.  Using proper counseling in conjunction with the -1A ensures the Soldier is well informed and knows exactly where they stand with their Rater and Senior Rater at all times.  Before picking up the pencil to make comments on your -1A you need to totally understand the process…then you can start putting comments on your -1A. ~ Mentor Military 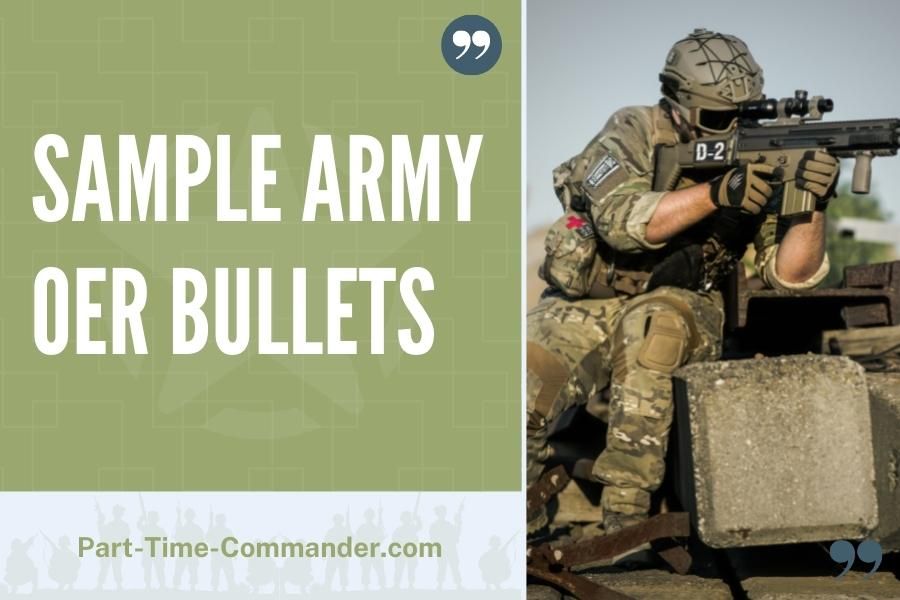 Now that I’ve given you my advice about managing your OER, here are some sample OER bullets and OER comments. Please know that I just copied these from my own OERs (I did change my name and unit though). Feel free to use these as a template for doing your own.

During this short rating period, MAJ Roscoe did an exceptional job managing the S4 section. Upon arrival in our unit, MAJ Roscoe made an immediate positive impact by revamping the unit’s Command Supply Disciple Program SOP and CSDP Binder. Several months later, his section received satisfactory results on both the COMET and the CSDP Inspection. During Annual Training, MAJ Roscoe really stepped up to the plate and led one officer and 28 Soldiers. His maintenance section maintained an OR rate of 97% and issued 12,000 meals during Annual Training without incident or injury. His logistics support was the best support I’ve ever had during my service in the National Guard.

For his exceptional performance, he received 2 Army Commendation Medals and was promoted to Major at minimum time-in-grade. MAJ Roscoe is a talented leader and logistician. You can always count on him to get things done, and done right. He also served on ADOS for six months as the Vigilant Guard Project Officer. In this capacity, he served as the lead project planner for a multi-state, joint-level exercise. In his free time, he wrote and published two books, completed ILE Phase I and trained for a marathon.

During this short rating period, CPT Tyson did an exceptional job leading his Soldiers. CPT Tyson is an experienced, confident, loyal and ultimate team-player and leader who always does whatever it takes to make sure the mission is done and done right. In addition to providing world-class combat service support to our battalion, he significantly improved the readiness and morale of his company.

Some of his key accomplishments include 5 re-enlistments, six promotions, 19 Soldiers graduated from either MOSQ or NCOES and a company Non-Val Pay of less than 1%. Next, his Maintenance Section maintained an OR rate in excess of 95% while repairing 10+ vehicles. He completed his change-of-command inventory with zero discrepancies or shortages. Finally, CPT Tyson was selected to serve as the 58th Regiment S4 Officer, a position above his current pay-grade. He will be greatly missed in our battalion and within his company.

CPT Smith did an amazing job creating a technically and tactically proficient company that is motivated, trained, disciplined and capable of completing any combat deployment. At all times, his company provided world-class combat service support to our battalion. Some highlights include: 590.5 man-hours of maintenance completed, 100+ vehicles repaired, an OR Rate in excess of 94%, prepared 6,000 meals, issued 8,000 gallons of fuel, and issued 200,000 rounds of ammunition without incident or injury.

In January 2009, he deployed his company to Washington DC in support for the 56th Presidential Inauguration and successfully operated a Traffic Control Point. To improve his unit readiness, CPT Smith increased his unit strength from 85 to 101 a 20% increase. He also improved the DMOS rate from 88% to 93% while maintain a non-val pay rate of less than 1%. Moreover, he promoted 17 Soldiers, graduated 52 Soldiers from military schools and extended 9 of 11 eligible Soldiers.

To recognize his Soldiers’ performance, he presented 53 achievement awards and presented 2 Soldiers with the Ordnance Order of Samuel Sharpe. To improve his professional development, he completed 4 military courses to include: Combined Arms Exercise (CAX), Project Management, Strategic Planning and Basic Accounting.

In the maintenance realm, he worked closely with the Motor Sergeant to reform our maintenance program. His hard work and new SOP helped our unit maintain an Operational Readiness Rate in excess of 95%, which is a 20% improvement from the previous year. In regards to administration, 1LT Edwards created an Awards Program for our company which resulted in 42 Soldiers receiving some type of achievement award during the past calendar year.

The bottom line is that 1LT Edwards was the most critical and influential person in our organization this year. Without him, I’m not sure we would have accomplished any of these things. He also finished his Master’s Degree and completed his Captain’s Career Course. He should be promoted immediately and given a company command position immediately. He is definitely a future senior Army leader.

2LT Amy Jones is an amazing military leader. From the time she arrived in my company, she was a go-to player. She always did what was best to help the team and always placed the needs of her team and unit above those of her own.

Some of her key accomplishments include helping 7 Soldiers get promoted, sending 9 Soldier to NCOES schools, creating a formal counseling program in her platoon, getting recognized at Annual Training by the Commanding General, spearheading the unit’s Family Readiness Group, revamping the Platoon’s and Company’s SOPs, volunteering to mentor one of her peer Platoon Leaders, graduating from her BOLC Class as the Honor Grad and scoring a 300 on her APFT.

As her Company Commander I am honored to serve with her. Promote to 1LT immediately, ahead of her peers. Unlimited potential. A superb leader with huge potential. 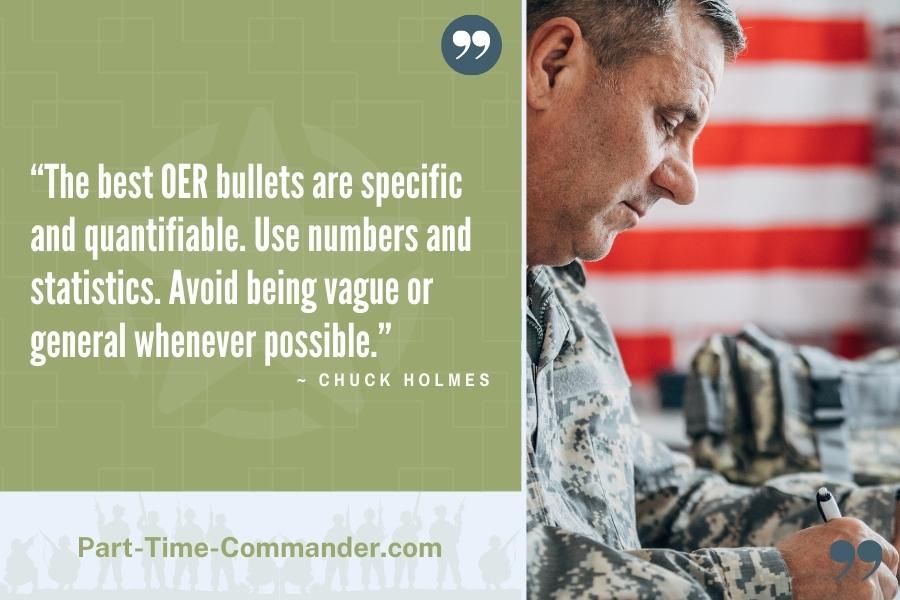 If you’re an Army Officer, I would love your help. If you could submit one or more of your Army OER Bullets and OER Comments, I would appreciate it. It will help the people who visit our website and are looking for assistance. Feel free to change your name and unit to protect your identity. You can submit it in the comment’s section below or email me.

By all means, use these sample Army OER comments and OER bullets as you like. Simply change the name, modify as required for your duty position, and save yourself some time and energy preparing your OER.

And whatever you do, please be proactive about your own military career. Don’t sit back and wait for your boss to do your OER. Make sure you are part of the process! Follow the tips in this article and you will be well on your way.

What are your thoughts? Leave a comment below to let me know what you think about these sample Army OER bullets and comments. I look forward to hearing from you. You can check out the link to see example Senior Rater OER Comments.

The Army wants specifics. If you marked “no” in a box, you have to explain in detail why. This can be hard because you have limited space, so focus on the facts. The same applies to outstanding performance. You must justify through detail why you think an officer deserves an outstanding rating. Use tangible data when possible. For example, if the officer is very fit, you can state, “Captain Doe achieved a score of 345 on his latest PT test,” instead of saying, “Captain Doe is in good shape.” As another example, saying “Captain Doe recovered $500,000 of missing equipment swiftly by utilizing a new tracking system” is better than, “Captain Doe is responsible for high-dollar equipment.” AR 623-3 provides some guidance in writing the OER, but an effective rater will have, or will learn, some advanced knowledge of writing. ~ Work.Chron

If you’re looking for a great resource to help you with your OERs and counseling, I suggest this book on Amazon.