Today, I want to educate you on the Army Meritorious Service Medal and provide you some sample Army MSM bullet points.

The Army Meritorious Service Medal is a prestigious award. If you’ve received one, you should be proud. Let me take a moment and tell you a little bit about the Army MSM.

Facts About the Meritorious Service Medal

Here are some interesting things I found out about the Meritorious Service Medal online.

The Meritorious Service Medal (MSM) is a decoration presented by the United States Armed Forces to recognize superior and exceptional non-combat service that does not meet the caliber of the Legion of Merit Medal. As of September 11, 2001, this award may also be issued for outstanding service in specific combat theater. The majority of recipients are field grade officers, senior warrant officers, senior non-commissioned officers and foreign military personnel in the ranks of O-6 and below. Subsequent awards are denoted by bronze oak leafs for Army and Air Force members, and gold stars for Navy, Marine Corps and Coast Guard members. ~ USAMM.com 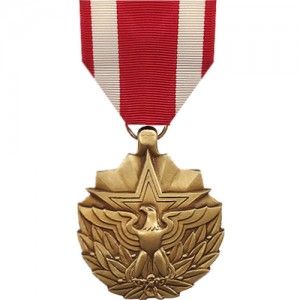 If you are recommending someone for an Army Meritorious Service Medal and you are writing the citation for this award,  you need to put some serious thought into it. You can’t just wing it. You need to be detailed, thorough, use real numbers and stats, and be as specific as possible.

I’ve provided 12 sample Army MSM bullet points below. Feel free to use these as is, or modify them, any way you would like to.

# 1: During his tenure in Company Command, CPT Edwards maintained a DMOSQ rate of 95% within his company, an improvement or more than 27% since taking command. In addition, he promoted 37 Soldiers, graduated 43 Soldiers from NCOES, and re-enlisted 21 of 23 eligible Soldiers. Furthermore, he implemented an effective awards program resulting in 48 Soldiers receiving some type of achievement award.

# 2: For exceptional meritorious service while serving as the Maintenance Platoon Sergeant. SFC Smith helped the battalion maintain an OR Rate of 98%, an improvement of nearly 8%, prior to him taking the job. He developed new maintenance procedures which resulted in a $300k saving in repair parts. He also re-wrote the Maintenance Shop SOP and streamlined maintenance operations. His section conducted 1,724 man hours of accident free labor. They completed 322 maintenance job and were nominated as the best platoon in the battalion.

# 3: While serving as Supply Sergeant with Company F, 234th Engineer Company, SSG James helped his company win the Army Supply of Excellence Award, being chosen over 2,000 other companies. This is a huge achievement considering just before he took the position, the previous Supply Sergeant was relieved and there were huge discrepancies on the property book.

# 4: During his two year tenure in Battalion Command, LTC Riley successfully deployed his battalion to Iraq. During the deployment, his battalion completed 2,800 hours of convoy operations without loss or injury. His battalion safely completed 789 convoy missions, delivering mission essential supplies to the forward lines. In addition, he maintained an operational readiness rate of 97% on his battalion’s equipment (127 vehicles).

The MSM was previously awarded as a decoration for achievement during peacetime, but effective September 11, 2001 this decoration may also be bestowed in lieu of the Bronze Star Medal for meritorious achievement in a designated combat theater. Normally, the acts or services rendered must be comparable to that required for the Legion of Merit but in a duty of lesser, though considerable, responsibility. Within the U.S. Army, according to AR 600-8-22, Paragraph 3-16, the MSM may not be upgraded to or downgraded from a recommended Bronze Star Medal. In the Army, an MSM recommendation that is downgraded will be approved as an Army Commendation Medal (ARCOM). ~ Wikipedia

The next four sample MSM bullet points are from my award during my Kosovo deployment.

# 5: Prior to the deployment, CPT Holmes spent four months on ADSW at Fort Belvoir as the G4 Plans Officer. During this time, he helped develop the deployment plan and service support annex for the Task Force to deploy from Home Station to Camp Atterbury and then Germany. During the training at Camp Atterbury, he had a vital role developing operations orders and participating in the Military Decision Making Process. As a result, the Task Force successfully completed CPX#1, CPX#2, and CPX#3.

# 6: During the MRX in Germany, CPT Holmes served as the G4 Plans Officer and assistant Chief of Plans. He had a vital role preparing the service support annex for operations orders, briefing the Commanding General and Chief of Staff and participating in the Military Decision Making Process. As a result, our Task Force had the required Logistics for the MRX and safely deployed from Germany to Kosovo. For his efforts, CPT Holmes was recognized as “Hero of the Battlefield” by the Observer Controllers.

# 7: In December, CPT Holmes was appointed as the Supply Support Activity Accountable Officer. As the Accountable Officer, he was personally responsible for an inventory valued in excess of $18.6 million. Because of his leadership, the SSA exceeded nine of nine DA Performance Objectives and was recognized as the best SSA in USAREUR, by winning the USAREUR Supply of Excellence Award competition. In addition, he saved the Task Force $1.1 million by conducting an ASL Review Board to modify stockage objectives.

# 8: In March 2007, CPT Holmes was selected as the Task Force Fuel Officer. His primary responsibilities were forecasting fuel requirements and managing one million gallons of inventory, located in three different countries, valued at $2 million. During the rotation, his section received and issued 1,200+ deliveries of fuel, totaling more than nine million gallons, valued in excess of $20 million. As a result, the Task Force had the required fuel to meet all mission requirements.

# 9: CPT Tebow’s leadership, guidance, and knowledge resulted in 19 Soldiers getting promoted, 7 Soldiers graduating from NCOES, 17 Soldiers getting certified for the National Guard Reaction Force (NGRF) and 22 of 28 eligible Soldiers reenlisting. He also created a mentoring program for his four lieutenants, resulting in three of his lieutenants getting promoted to captain. Furthermore, he supported the “Guardsmen of the Day” initiative, resulting in four new leads and one new enlistment.

# 10: The company conducted over 50 convoys, distributed approximately 15,000 gallons of water, prepared and distributed 15,500 meals, issued over 8,000 rounds of ammunition and issued over 14,000 gallons of fuel, all without incident or injury. CPT Tebow also maintained 100% accountability of a $12 million property book and turned in $1.5 million worth of excess equipment. He also arranged to have the entire Mess Section trained at Fort Lee on the Containerized Kitchen Trailer (CKT).

# 11: Upon taking command, CPT Tebow’s first mission consisted of moving the company’s entire inventory to a new armory, with a CLRT Inspection less than one month away. The move was flawless and the unit passed the CLRT Inspection. In addition, F Co. supported the Presidential Inauguration in January 2013, providing a 70 Soldier support team. The mission was a huge success.

# 12: CPT Tebow’s biggest accomplishment is rebuilding the company and improving morale. When he first took command, the unit was in shambles and morale was at an all time low. He did lots of things to improve the unit such as arrange a company photo, schedule a Family Day and Christmas Party, scheduled team building events, spent time listening to the junior enlisted Soldiers, created mentoring programs for his officers, and many other “intangible” things. 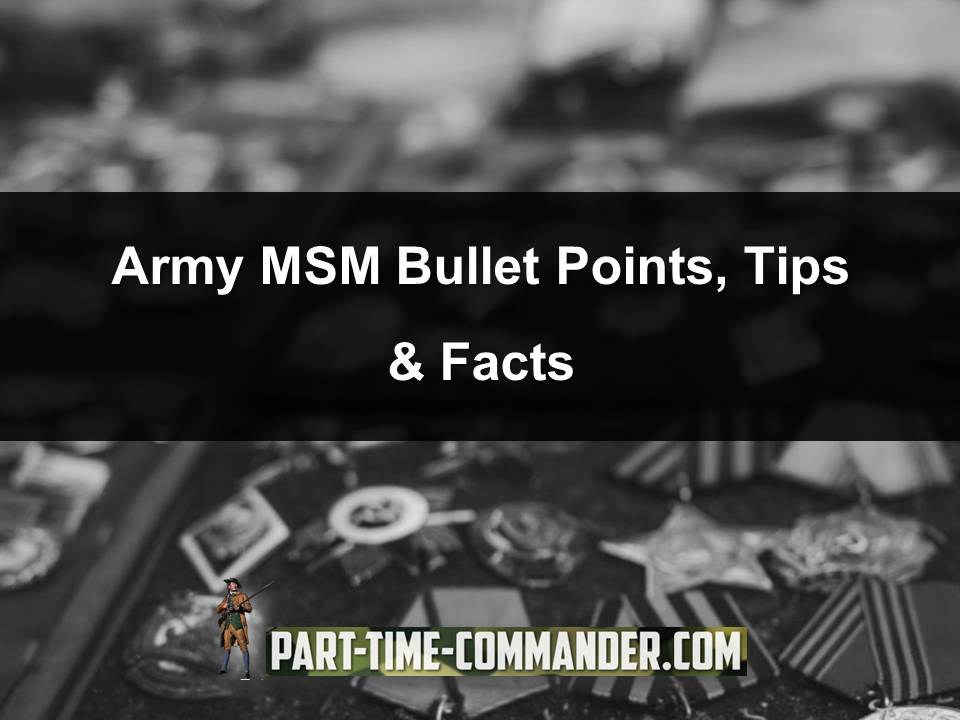 In conclusion, we’ve covered a lot of information about the Army Meritorious Service Medal. We’ve covered 12 different sample Army MSM bullet points. If you are responsible for preparing a MSM, make sure you take your time and provide as much quantifiable information as possible. Use numbers, dollar amounts, soldiers trained, percentages, statistics, and anything else you can think of. These type of bullet points are much better than generic bullet points.

A bronze medal one and a half inches in diameter overall consisting of six rays issuant from the upper three points of a five-pointed star with beveled edges and containing two smaller stars defined by incised outlines. In front of the lower part of the medal there is an eagle with its wings displayed. It is standing on two upward curving branches of laurel tied with a ribbon between the eagle’s feet. The eagle, symbol of the nation, stands on laurel branches denoting achievement. The star is used to represent the military service and the rays emanating therefrom denote the constant efforts of individuals to achieve through excellent and meritorious service. ~ Roll of Honor

If possible, talk with the S1 or G1 and find out what the approving authority’s guidance is on submitting Soldiers for this award. That can save you a lot of time and headaches.

What are your thoughts? What are some sample Army MSM bullet points you can share with us? Leave a comment below and let us know what you think. I look forward to hearing from you.

Other Must Reads Posts