In today’s post, I want to discuss the Relief for Cause OER. I will share common reasons they are given, the regulations concerning this type of OER, my thoughts, and the appeals process.

Let me preface by telling you that I hope you never receive this type of evaluation report, or have to write one for one of your subordinate officers. But, if you plan on making a career out of the Army, there’s a small chance one of these two situations might happen to you at some point. If either of these two events happen, it is in your best interest to EDUCATE yourself about the regulations and procedures concerning a Relief for Cause OER. 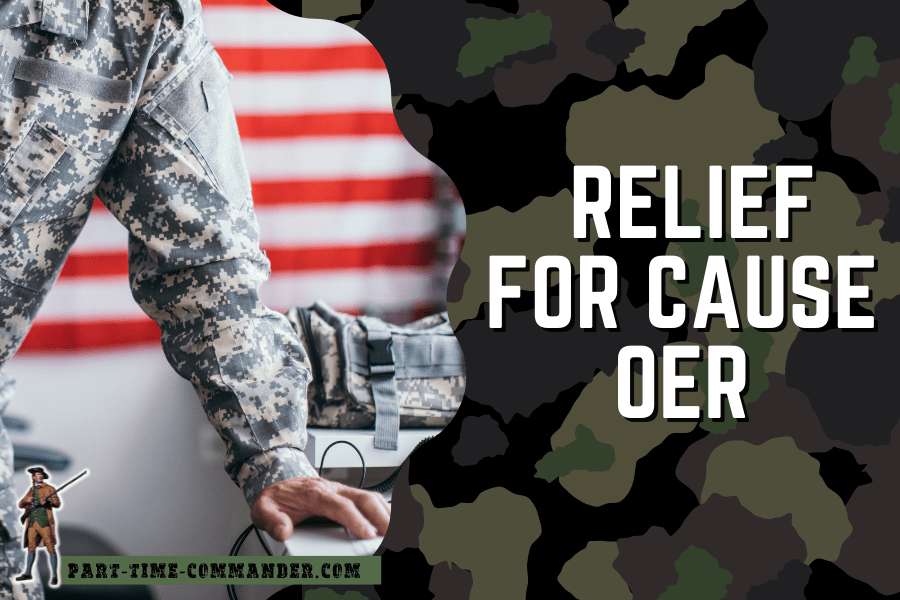 What is Relief for Cause?

According to AR 623-3, a “Relief for Cause” is defined as an early release of an officer from a specific duty or assignment directed by superior authority and based on a decision that the officer has failed in his or her performance of duty.” In layman’s terms, it’s the process of formally getting fired from your job.

Please note that this isn’t very common in the Army. Normally, you get a few “chances” to correct your behavior or performance. Or, you get a “less than stellar” evaluation report. During my 15-years of service, I only knew one person that received a “Relief for Cause” OER. And I met plenty of people who weren’t very good at their job or they got “informally” fired by being moved to a new duty position ahead of schedule.

Reasons for a Relief for Cause OER

In most cases, a Relief for Cause happens when a rater loses confidence in a subordinate’s ability to successfully perform their job due to misconduct, poor judgment, the subordinate’s inability to complete assigned duties, or for similar reasons. When this happens, the rater has the authority to formally relieve the subordinate officer.

Typically, the reason is determined by the rater or senior rater, but the request could come from a higher ranking officer outside of your unit.

Relief for Cause Regulation AR 623-3

I thought it would be beneficial to post what Army Regulation 623-3 says about the Relief for Cause process. I know the reading is a bit dry, but it is helpful.

“A code 05, “Relief for Cause” OER, is required when an officer is relieved for cause, regardless of the rating period involved (for example, information pertaining to a previous reporting period that did not come to light until a later rating period). “Relief for Cause” is defined as an early release of an officer from a specific duty or assignment directed by superior authority and based on a decision that the officer has failed in their performance of duty. In this regard, duty performance will consist of the completion of assigned tasks in a competent manner and compliance at all times with the accepted professional officer standards consisting of attributes and competencies as part of the Leadership Requirements Model (see ADP/ADRP 6–22). These standards will apply to conduct both on and off duty. The following are additional considerations for “Relief for Cause” OERs. AR 600–8–2 explains procedural requirements for a nontransferable flag for
“Relief for Cause” reports.

a. If, regardless of reason, the relief does not occur on the date the officer is removed from duty position responsibilities (that is, suspended), the period of time between the removal and the relief will be nonrated time included in the period of the “Relief for Cause” OER. The published rating chain at the time of the relief will render the “Relief for Cause” OER at the time of the relief; no other OER will be due on this officer during this nonrated period.

b. Cases where the rated officer has been suspended from duties pending an investigation will be resolved by the chain of command as expeditiously as possible to reduce the amount of potential nonrated time involved. Every effort will be made to retain the established rating chain, with the officer performing alternate duties under that rating chain until the investigation is resolved. If the rated officer is suspended and subsequently relieved, the period between the suspension and the relief is nonrated time. The suspended officer will not render evaluation reports or receive an OER until their status (and, thus, their ability to serve as a rating official) is decided (that is, if relieved the rated officer will not render reports as a rating official). While no OER will be rendered on a suspended officer during the period of suspension, for an officer who is suspended and subsequently returned to duty (not relieved), the period of suspension is recorded as evaluated time on the next OER.

c. If a relief for cause is contemplated on the basis of an informal AR 15–6 investigation, referral procedures contained in that regulation will be followed before the act of initiating or directing the relief. This is irrespective of the fact that the resultant OER will also be referred to the rated officer as described in paragraph 3–29. This does not preclude a temporary suspension from assigned duties pending application of the procedural safeguards contained in AR 15–6. Action to relieve an officer from any command position will not be taken until after obtaining written approval from the first general officer in the chain of command of the officer being relieved, as required by AR 600–20.

d. The “Relief for Cause” OER must specifically indicate who directed the relief of the rated officer. If the official directing relief is in the rating chain, that official will clearly explain the reason for the relief in their portion of the OER. If the relief is directed by someone outside the rating chain, the evaluation report will indicate who directed the relief in either the rater or senior rater narrative portion. See DA Pam 623–3 for instructions and procedural guidance that apply to completing a “Relief for Cause” report.

e. If the relief is directed by someone other than the rating officials, the official directing the relief will describe the reasons for the relief in an enclosure to the OER (see fig 3–2). See paras 2–15 through 2–18 for supplementary review requirements.

f. If, after a “Relief for Cause” report has been submitted to HQDA, rating officials become aware of additional significant information, the provisions of paragraphs 3–37, 3–38, and 3–39 will apply.

g. A rating official may relieve an officer because of information received about a previous reporting period. For example, a rating official who receives information from a completed investigation regarding a past incident plans to relieve the officer from their present position or process them for elimination. When this occurs, the following provisions apply:

(1) A “Relief for Cause” report will be prepared.

(2) The rated officer will be evaluated only on performance during the current rating period, with the exception of the statement clarifying the relief.

(4) The reason for the relief will be cited in the report.

(5) If necessary, the new information will be forwarded to the previous rating chain when submitting an addendum, as described in paragraphs 3–37, 3–38, and 3–39.

Before you initiate a Relief for Cause OER for one of your subordinate officers, here are a few things you should consider:

Sit down with the officer to hear their side of the story. There might be more to the situation than you know about.

Read AR 623-3 and DA PAM 623-3 to educate yourself on the process and regulations. Most of the “common” questions & answers are provided in those resources.

Wait two to three days until your emotions die down so you can make a logical decision about the issue. Is a formal Relief for Cause the best course of action, or is there another option you could pursue?

Consult with your Legal Team to find out your role, responsibility, and obligation. The JAG Office is a WEALTH of information. Make sure everything you plan on doing is within your legal boundaries.

Initiate a formal 15-6 Investigation, if applicable, to look into the matter (talk with JAG first). This is required before you formally publish the Relief for Cause OER.

Once you take these steps, you will be educated about the process and your courses of action.  At this point, trust your gut decision.

You have the right to appeal the Relief for Cause OER, but the odds of overturning it are stacked against you. The best thing you can do is schedule a consultation with your S1 or local JAG Office. Find out what your rights are and educate yourself on the regulations covering the appeal process (see below). There are lots of different rules for the process, depending upon the rank of the officer.

You might also want to consider the time involved to appeal it, the evidence you have to back-up your opinion of the matter, how much longer you have in your career or military service obligation, and the advice you get from JAG or a civilian attorney. 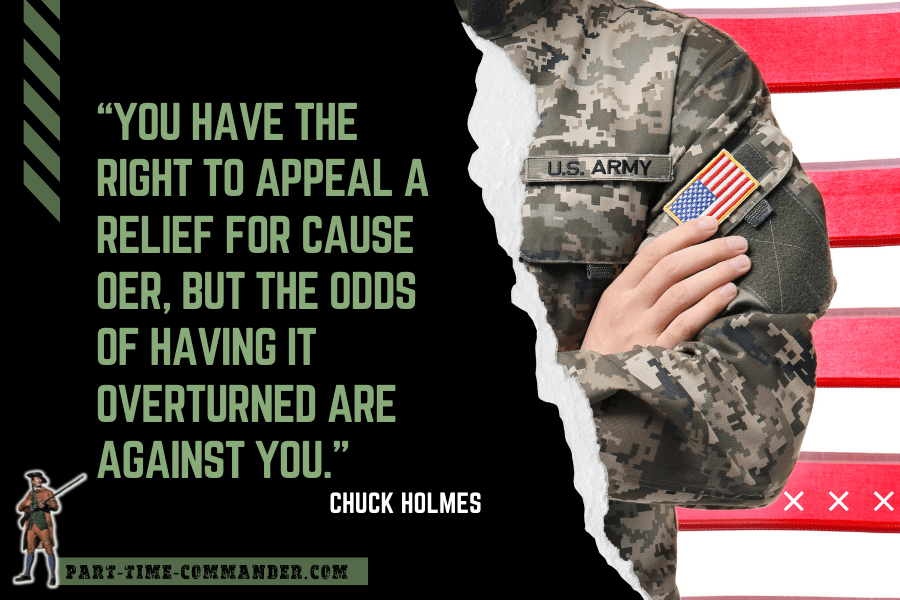 I’d like to close by saying the Relief for Cause OER is typically a “career ending” evaluation report for the rated officer. While it may be necessary at times, the rated officer should always do their due diligence and determine if there is another course of action that would remedy the situation. If nothing else, consult with JAG and put some serious thought into the matter before you choose this course of action.

If you have any questions I may be able to help you with on this complicated subject, just post them below in the comments section, and I will do my best to provide an answer. Thanks for your service. Hooah!

10 thoughts on “Army Relief for Cause OER: Regulations, Tips & Resources”