Let me begin by telling you that I am not a recruiter, nor am I am in the military anymore. I am a civilian. My goal today is to share with you why I think it’s a good idea to join the Army National Guard.

I spent six years in the Maryland Army National Guard and enjoyed the experience. I joined in 2005. Prior to that I was an Active-Duty Army Army Officer for a few years and also spent a year in the IRR.

When I joined the Maryland Army National Guard I signed up as a Logistics Officer and started out as a Company XO. During my six years in the Maryland Army National Guard, I met a variety of great people, had lots of cool jobs, and even deployed to Kosovo. At the end of my six year commitment, I decided to resign my commission for personal reasons.

Even though I am a civilian now, I will always cherish my time in the ARNG. If you are thinking about joining the ranks as a Citizen-Soldier, I’d like to give you some additional insights to help you with your decision. 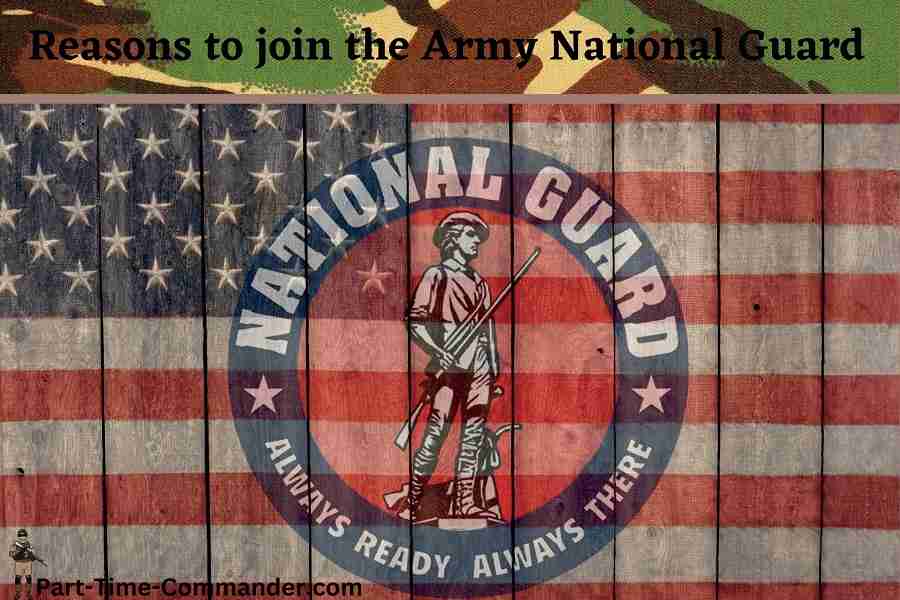 Please keep in mind these are just my personal thoughts. We can agree to disagree.

If I could give credit to the military for only one thing, it would be that the military gave me purpose, direction, and discipline. Before I joined the military, I had NO idea about what I wanted, who I was, or what I should do with my life. Can you relate?

When you join the Army National Guard, you’re joining a team with purpose and setting yourself up for a successful future. You’ll gain job skills and leadership experience, and get a head start on a civilian career. Explore the many ways Guard service can accelerate your path. ~ Army National Guard

I always tell young adults that the military will teach you “life skills” you can use throughout your entire adult life. Even if you don’t enjoy your military experience, you will at least know what you don’t want. Spending  a few years in the military will benefit you for the rest of your life.

What’s great about the National Guard is that you don’t have to go full-time. You can have a civilian career, in your local community, while you serve. It’s the best of both worlds.

The skills section on your resume can be almost as important as the experience section, so you want it to be an accurate portrayal of what you can do. ~ Zippia

These skills increase your value in the job market and help you throughout life.

One neat thing about serving in the National Guard is that most of the people you serve with have a diverse background. I’ve seen dentists serve in the infantry, accountants serve as cooks, entrepreneurs serve as military police, and much more.

The skills that you learn in the National Guard can help you launch a new civilian career, or just improve your skills with your current career.

In prior generations, serving your country was important. it was considered an honor. Now, less than 1% of the population has served in the military. I still think it’s a noble idea to serve your country and state.

What’s great about the Army National Guard is you can serve the citizens of your state, in addition to your fellow Americans. I can’t speak for you, but I felt a great sense of pride putting on a uniform and being part of a time honored profession.

When there are state emergencies, the National Guard is often utilized. This includes floods, riots, tornadoes, snow storms, and other natural disasters. In times of turmoil, you can make a difference in your local community!

The Guard is generally called up to respond to state-level emergencies, such as natural disasters. But, unlike most of the other military forces, it can also serve a domestic law enforcement role. ~ Council on Foreign Relations

# 4: To Get an Education or Degree

College is expensive. Many college students in today’s world graduate college with huge debts. The Army National Guard will allow anyone to go to school for free, and even get paid while you attend college.

Joining the Guard gives you more than just the pride that comes from serving your country. You can earn benefits to help pay for your education and expenses, and you can complete your education while you serve. ~ Army National Guard

Between tuition assistance, scholarships, and the GI Bill, there is absolutely no reason why you should have to pay for anything out of pocket. When I was serving in the National Guard, I used to tell all of my Soldiers that there is NO reason not to leave the Army with a college degree (if you want one). You can attend school part-time or full-time, at your local college or university, or even take classes online.

During my six years in the Maryland Army National Guard I traveled to Germany, Bulgaria, Kosovo, Hungary, and Macedonia. These were fun and exciting places I never would have visited on my own.

The militia has a strong and proud tradition that is older than our country itself. The militia (Citizen-Soldiers) have served in every war with distinction. I was proud to be part of this tradition. I’ve found that most people like to belong to something bigger than themselves.

The militia tradition meant citizens organizing themselves into military units, responsible for their own defense. Organizing the militia into regiments increased its efficiency and responsiveness, which proved critical for the defense of their communities. ~ Military.com 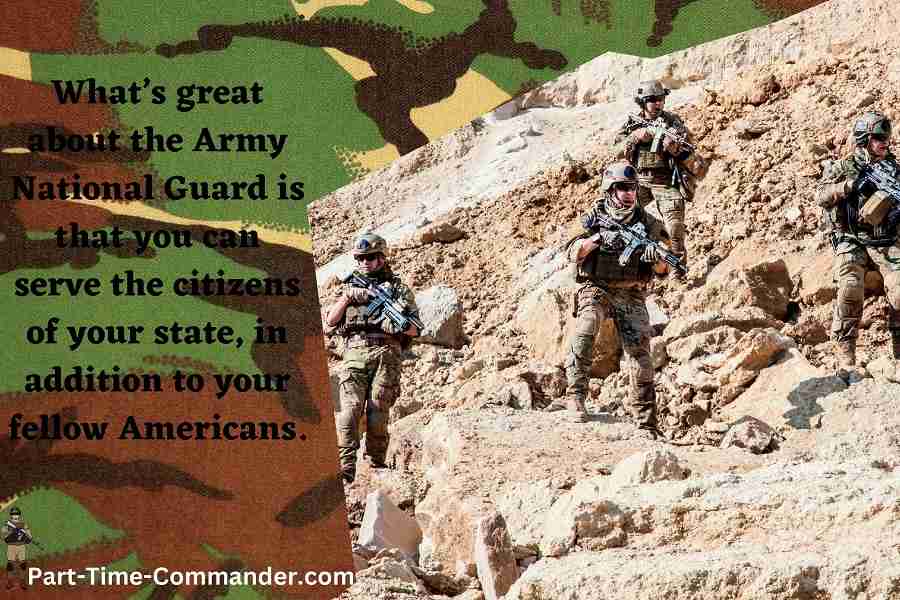 Some people say that the Army National Guard is the best part-time job out there. I agree. Most Soldiers will receive four days pay for a typical two day drill weekend.

You also have opportunities to serve on ADOS (Temporary Active-Duty), deployments, and military schools.

I was a “Guard Bum” for nearly two years, going to different schools and working on ADOS. It was a fun, challenging, and a rewarding experience, and the money was good, too.

In addition, you can earn a pension after serving for 20-years. Although you can’t draw your pension until you turn 60 (in most cases) it’s still a good deal. How many part-time jobs in America give you the ability to earn a pension? None that I know of.

Another important reason (I didn’t mention earlier) is the people. Most of the people I met in the Army National Guard were patriotic Americans who loved their country and felt an obligation to serve. That’s how I felt. As a civilian I don’t miss the training, the meetings, or any of the B.S., but I do miss the people.

In summary, these are my top 7 reasons to join the Army National Guard. If you’re contemplating the idea of being a Citizen-Soldier, I recommend you talk to some Soldiers currently serving in the Army National Guard (non-recruiters). Ask them a bunch of questions to learn about their experiences. If you decide you want to pursue this option, sit down with a local recruiter to find out what options are available to you.

I believe military service is a good thing. If you already have a civilian career, or don’t want to be a full-time Soldier, the Army National Guard is a great option! It’s like the best of both worlds.

What do you think? What are your best reasons to join the Army National Guard? Why did you join? Leave a comment below to share your thoughts. I look forward to hearing from you.

6 thoughts on “Reasons to Join the Army National Guard: 7 Things to Consider”