The Ordnance Order of Samuel Sharpe is a very prestigious award for any officer or NCO serving in the Army Ordnance Corps. I was very fortunate to have the honor of recommending several people for this award during my military career. The award itself has been around since the mid 1990s. It was designed to recognize individuals for their service to the Ordnance Corps.

Who is Samuel Sharpe?

Samuel Sharpe lived during the 1600s right here in America. He was part of a 13-member council that assisted the governor and deputy governor in overseeing the Massachusetts colonies. In 1629 he was appointed “Master of the Ordnance,” and was responsible for the powder, ammunition, and fireworks, for the colonies. In essence, he was the first Master Gunner in the United States.

According to history, Samuel Sharpe was appointed to many positions in government during the very early years of this country. As the first settlers were arriving at the New World, many things would change about the government and life in general. The government of the Massachusetts Bay Colonies was resided over by a Governor, Deputy Governor, and a Council consisting of thirteen freemen. Mr. Sharpe served as one of these thirteen. He was also charged with the care of the “five pieces of Ordnance: that belonged to the colony.” This took place in February of 1628.

On the 17th of April 1629, Mr. Sharpe was appointed by the Council of the Plantation in Massachusetts Bay Colonies to be “Master Gunner of Ordnance”, a title brought over with the colonist from England. The Master Gunner was charged with care of the “ORDNANCE, SHOT, POWDER, MATCH, LADLES, SPONGES, WORMES, CARTRIDGES, ARMES, FIRE-WORKS, AND THE REST OF THE GUNNERS.” ~ USAOCA.org 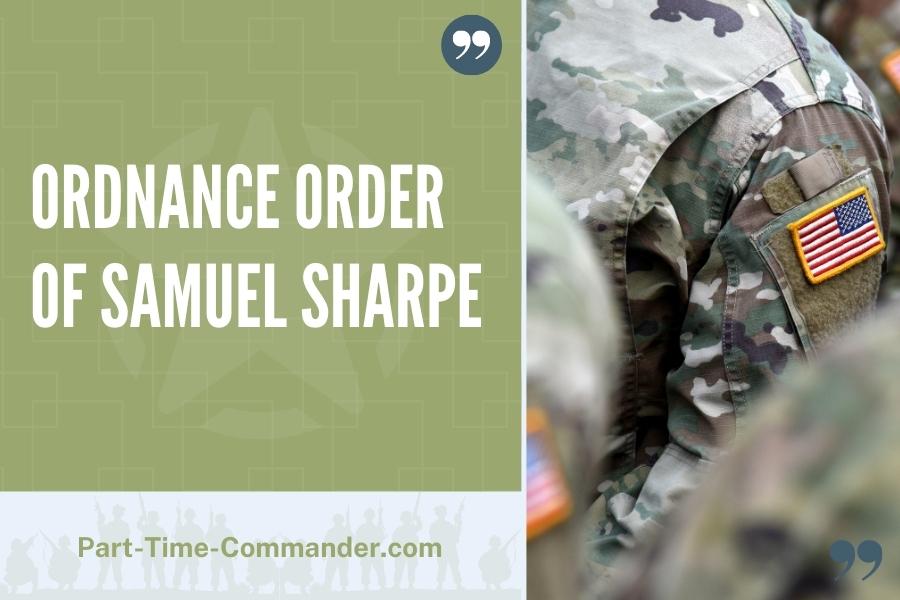 According to the official website of the United States Army Ordnance Association, “the purpose of the Ordnance Order of Samuel Sharpe is to recognize those individuals who have served the United States Army Ordnance Corps with demonstrated integrity, moral character, and professional competence over a sustained period of time. And whose selfless contributions to the Corps stand out in the eyes of their seniors, peers, and subordinates alike.”

When was it Introduced?

The award has been around almost 30-years now. Here’s what I found online:

First introduced in May 1994 by the United States Army Ordnance Corps Association (USAOCA), the Order of Samuel Sharpe ensures the proper recognition of Ordnance personnel who have demonstrated the highest standards of integrity and moral character, displayed an outstanding professional competence, served the Army Ordnance Corps with selflessness, and contributed to the promotion of the Ordnance Corps in ways that stand out to the recipient’s seniors, subordinates, and peers. ~ CPT Quail

The criteria is a little bit vague. In other words, there isn’t a rank requirement I can find. Typically, I’ve found that the award is normally reserved for E-6s and higher and Captains and higher. But I’ve also known experienced E-5s who received the award and some senior lieutenants who were previously enlisted, who received the award. As long as you have a good amount of experience in the Ordnance Corps (probably five years or more) you are eligible for the nomination. Ultimately, it’s up to your O-6 (or the Association) to approve your nomination.

Who is the Approving Authority?

Wear of the Ordnance Order of Samuel Sharpe

So, when are you allowed to wear your Ordnance Order of Samuel Sharpe award? Here’s what I found online:

What Do You Get?

When you get approved for the Ordnance Order of Samuel Sharpe, you get a certificate and medal. According to one resource online “The Samuel Sharpe medal depicts an eagle holding a flintlock rifle, surrounded by oak leaves, with a shell and flame overhead. The eagle represents America’s freedom, which has been defended faithfully by members of the corps since 1812. The flintlock rifle represents the Ordnance Corps’ beginnings and the materiel support provided by Ordnance personnel in both peace and war. The oak leaves represent the strength and resolve of the Ordnance Corps to stand the test of time. The shell and flame represent the unleashed energy of the Ordnance Corps.”

As a Small Unit Leader in a Logistics Unit, you should educate yourself about this award. If you have squared officers and NCOs working with you who serve in the Ordnance Corps, you might want to consider submitting them for this award. This is great for morale and esprit de corps in your unit. And your subordinates will appreciate that you took the time to do it. All you have to do is fill out a nomination form and get your chain of command to approve it.

In summary, the Ordnance Order of Samuel Sharpe is a great award for Ordnance Officers and NCOs. It’s designed to recognize Soldiers for their time honored commitment to the Ordnance Corps. It’s dedicated to Samuel Sharpe, who was an important and patriotic man during the 1600s. Very few people know about the award. If you are an Ordnance Soldier, or have Ordnance Soldiers working for you, you should educate yourself about this award and use it to recognize your good Soldiers.

On a side note, if you have been on the receiving or giving end of this award, I would love to hear your story. Please tell us about your experience with the Ordnance Order of Samuel Sharpe. Also, if you have any questions about this award, you can post them below.