National Guard deployments have increased drastically since the Global War on Terrorism began in 2001. Prior to those horrific acts of terrorism, National Guard and Army Reserve deployments were less common.  In fact, before the 2001 attacks, the National Guard typically served as a Reserve Force, whereas it now serves as an operational force.

If you currently serve in the National Guard, you should be prepared to deploy at some point in time. In fact, a huge majority of National Guard Officers have already deployed at least once. And, many Officers and Soldiers have two, three or even more deployments.

National Guard Deployments present many great opportunities for National Guard personnel. First of all, you get to serve your country and state. That is a great honor within itself.  Next, you get real world experience in your military occupation.  Normally, National Guard Officers only train one weekend a month.  However, during your deployment you will get to perform your military duties day in and day out.

The length of time for deployments will vary, depending on the situation. State active duty missions usually run from 15-60 days, while federal deployments are usually a minimum of 12 months. Guard Soldiers may also choose to volunteer for active duty assignments (for example, Border Patrol), and again, the length of deployment will vary. ~ Army National Guard

This increases your technical and tactical expertise.  This experience will make you a better leader and can also increase your marketability within the private sector too.  The experiences you get in combat will help “launch” you over your peers who have not deployed.  One year on a deployment is probably the equivalent of five to seven years of “standard” National Guard time, doing drill one weekend a month and two weeks per year. So, if you have a deployment under your belt, you will probably have more “subject matter expertise” than your peer who has not deployed.

Another great thing about National Guard deployments is the opportunity to finish your civilian education. If you need to finish a Bachelor’s or Master’s degree, you can do it overseas. Most installations have education offices and several colleges to choose from. You can also take online classes.  Also, you can use your Federal Tuition Assistance and GI Bill.  These options let you earn your education with little or no out of pocket money.

Furthermore, deployments allow most National Guard Officers to save money and pay off debt. Many National Guard Officers and NCOs earn more while deployed than they do back home with their civilian job. The deployment allows them to pay off debt, save money and plan for retirement.  Your keys to success are to develop a financial game-plan, set up automatic payments, and stay disciplined.  You also want to make sure that you and your spouse are on the same sheet of paper.

Another great benefit of National Guard deployments is the opportunity to travel.  Depending on which country you deploy to, you might get the opportunity to visit several different countries.  For instance, when I deployed to Kosovo, I visited Macedonia, Hungary and Bulgaria.  If it wasn’t for the deployment, there’s a good chance I never would have visited any of these countries.

National Guard, or a Reserve service member, and can either volunteer for IA service or be selected for it. usually IAs are Navy and Air Force service members that augment an Army or Marine Corps unit. Deploying IA Sailors and Airmen usually require additional training and can be ordered to tours longer in length than a traditional deployment. ~ Military.com 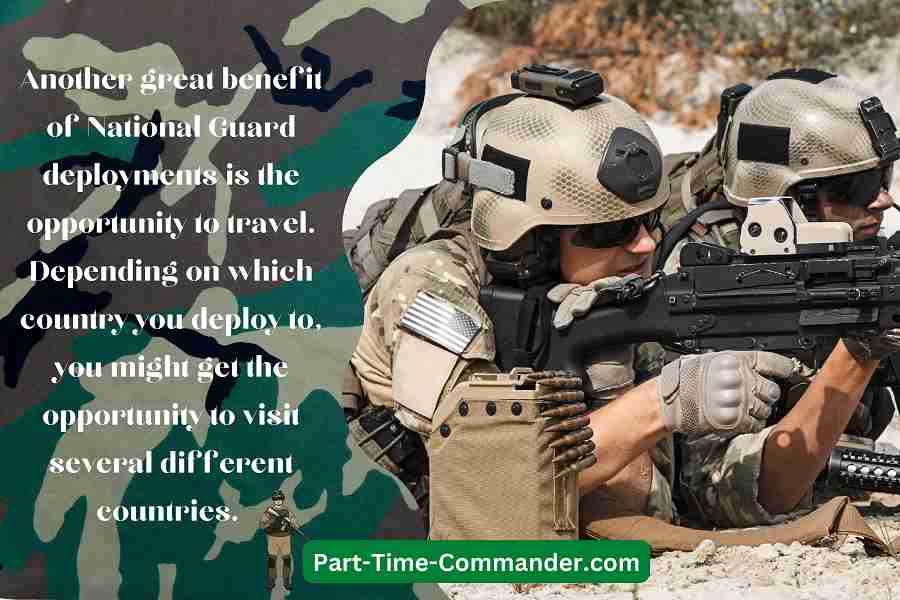 There are many other advantages to National Guard deployments. What I enjoyed most about my deployment to Kosovo was the opportunity to serve my country overseas and the chance to improve my leadership and tactical skills.  It was also enjoyable being in an “Active Duty” environment for a year.  I paid off all my debt and saved a considerable amount of money.  And being apart from my fiancee (now wife) really “improved” our relationship.  It taught us how much we really appreciated each other.

In conclusion, if you participate in a National Guard deployment, look for the positive in the situation. Find ways to take your experience and make yourself a better person, leader and Officer.  Never come back from a deployment in a worse situation than you were when you left.  Do something to improve your educate, your relationship, your finances, and yourself.

Do you have any added tips? Maybe you have questions about deployment? Just post them below, and we will answer them soon.