In today’s post, I’d like to review the top 12 military knives of all time, as I see it.

This list of military knives is from different military branches in different countries during different time periods. Of course, this list is just my opinion and we can agree to disagree.

I’ll be the first to admit, I love a good knife. While carrying a knife is not mandatory in the military anymore, many service members still prefer to do so. A good knife can get you out of a bad situation. It can be used for self defense or even as a tool.

So, let’s cover 12 popular military knives and see which ones made by list. 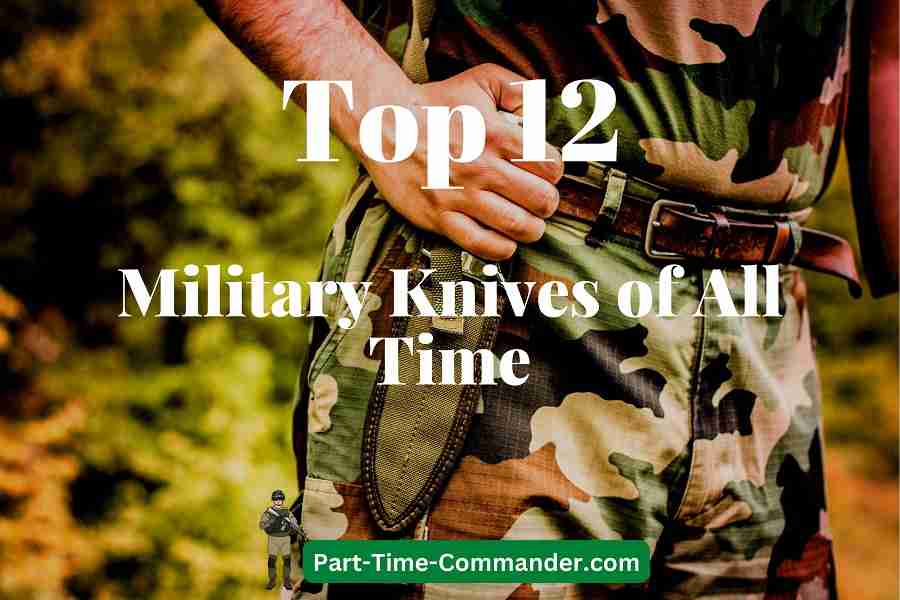 Top 12 Military Knives of All Time

Ranking these military knives in a certain order was a tough task, but here’s my best shot!

A knife plus brass knuckles, what more can you ask for? Its design is perfect for a hand-to-hand combat wherein the user can use it to punch, stab, or slice their opponents that will deal some massive damage. The “knuckle duster” first saw some action in the midst of World War I. Unlike earlier American trench knives like the M1917 and M1918, it has a 6.75 in (17.1 cm) double-edged dagger blade useful for both thrusting and slashing strokes.

The handle is made of cast bronze and uses a conical steel nut to hold the blade in place. The Mark I’s blade was blued with a black oxide finish, the bronze handle was chemically blackened, with cast spikes on the bow of each knuckle. The spikes were intended to prevent an opponent from grabbing the knife hand, as well as to provide a more concentrated striking surface when employed in hand-to-hand combat. ~ Amino

The safety ring of the karambit make it user-friendly but deadly to people on the receiving end. It was designed to be an all around tool, not only used for combat but for hunting, farming, and fishing. Most modern martial artists like it because it is great weapon for self-defense.

Karambit did not enter the world until the end of the 1960s. However, it was imported to the United States in the early nineteenth century. The knife became very popular in the 1970s and 1980s, when it was used by martial arts enthusiasts. It was used as a tool in training for Indonesian Pencak silat, Malaysian Silat and Filipino Kali. However, the general public does not know this type of knife to this day. Before the boom in martial arts, Karambit served mainly as an aid in cutting ropes, peeling fruit and other small tasks. ~ Outfit4Events

Made for the Army, this knife is 9 inches long and is green camo coated. It also comes with a belt cutter and window breaker and is easy to open with thumb and finger. It is an inexpensive knife that can be quite useful in the field.

Official Licensed US Army Knife, known as the “Liberator”. One of the most well built Spring Assist Knives you will ever get your hands on! Big, heavy duty, built to last! The printing on these knives are done with a hydro-dip, where the ink is layed out over water… so each blade pattern will be unique. ~ Slash2Gash

These are great knives… 7 inches long with a high carbon blade that is the black DLC coating. Many soldiers and police officers prefer this lightweight but tough knife made by Recon.

Cold Steel Tanto is a modern combat and self defense blade made by an American Knife maker called “Cold Steel” (knife) designed after the traditional Japanese Tanto blades. Features a 6.00 in. San Mai III steel blade and a 5.50 in. Kraton handle. Comes complete with a black leather sheath. ~ Galnet Fandom

These field knives manufactured by Glock have been used by various special forces personnel because of their high quality, great balance, and how they hold their sharpness. The Glock Field Knife can easily be used as a bayonet and is great for throwing.

The grips and sheaths of both knives are made of Glock polymer. The grip material has a lower hardness than the polymer used in Glock pistols, avoiding possible problems due to brittleness, but it is also less scratch-resistant…The upper crossguard is bent forward to allow the knife to be used as a bayonet on the Steyr AUG rifle. ~ Wikiwand

Not just a knife, this stainless steel device manufactured by Leatherman is a great addition to the soldier’s field gear. It has pliers, screwdrivers, various blades, and other tools to make survival easy. I believe every person should own one of these great inventions.

The Skeletool also features either a combo serrated-regular knife combo, or a regular straight blade knife depending on which model of Skeletool is selected. Both blade options include the safety blade locking feature. There are two different versions of the Skeletool, the first one displayed above is the regular stainless steel Skeletool. The regular Skeletool features the combo blade mentioned above. ~ Fogh Marine

These fixed, 6 ½ inch blades were a favorite of military personnel for many years. They were a double edged blade designed by retired US Army Captain Bud Holzman. PX’s stopped selling the knives for awhile claiming they were too brutal. Gerber added a serrated edge which allowed the Post Exchanges to resume selling them. It seems many people love finding the originals for their collections.

During the Vietnam War, the first production run of this knife had a five degree offset between the blade and the grip in order to ride in the sheath more comfortably, and give the user a grip similar to that of a fencing foil. This design feature led to a significant number of knives being returned by users for having a “bent blade”, so Gerber discontinued that element on subsequent production runs. ~ Wikipedia

These beautiful knives were designed by Spyderco especially for military personnel. They hold their edge well and the four inch blade can easily be opened with one hand. If you want to give a great gift to an Army soldier, I highly recommend a Spyderco military knife.

The Spyderco Military features a large handle, designed for serious use. As far as construction is concerned, Spyderco started out with large pieces of G10 and added nested partial steel liners. This provides a lot of strength and rigidity but is also what keeps this knife at an amazing 4.2 ounces. ~ Blade Reviews 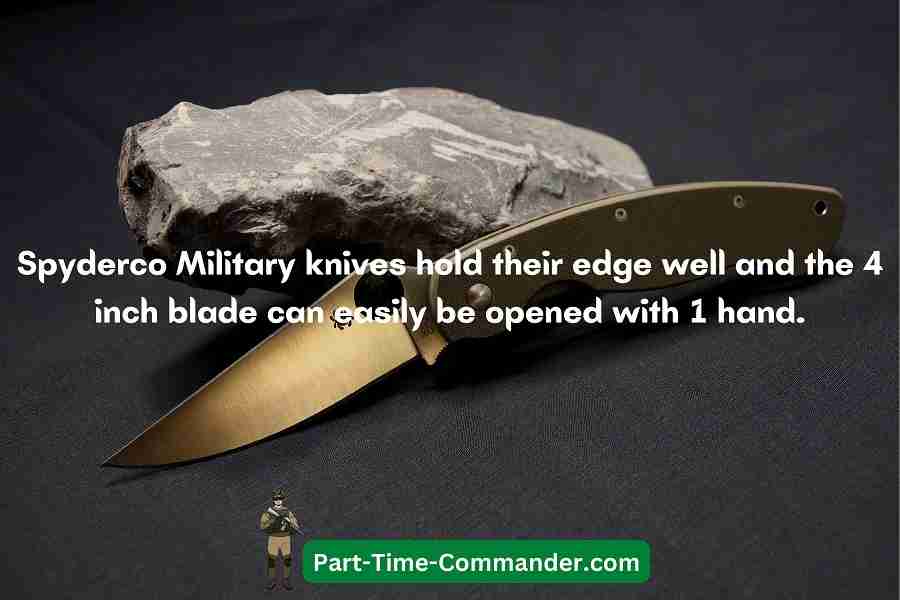 Still issued to certain soldiers, this has a 7-inch blade and the sheath also works as a wire cutter. The manufacturer now is Ontario but other companies have also made the M9 Bayonet for the military:

An M9 bayonet is commonly an unthought-of tool to most shooters without prior military service. While bayonets have been used since the 17th century, in today’s world, it’s considered to be an ancillary weapon or a weapon of last resort. ~ The Firearm Blog

The main knife of the Devil’s Brigade… The first U.S./Canadian Special Forces… It was a stiletto that was over seven inches long and loved by all who carried one. The limited production of this knife makes it one of the rarest knives in the world. I would love to have one for my collection.

I hear many say this is one of the best handled knives made. Between an excellent grip and one of the toughest blades made, many soldiers swear by the KA-BAR D2 Extreme.

The story of how “KABAR” got it’s name is simply amazing and unbelievable. The knife got its unique name when a fur trapper sent the owner of Union Cutlery a letter saying that he killed a bear using his knife when his rifle jammed. The letter was not legible and the only letters that could be seen is “K A B AR” from the phrase “kill a bear”. It is made in the U.S.A. with the finest of steel.

KA-BARs were designed for combat in World War II, and specifically the Pacific Theater of the war. Marines carried KA-BAR knives as they stormed beach after beach fighting Imperial Japan. When they finally returned home, the knife’s popularity swelled. ~ Renegade Camping & EDC

Used by British Commandos in World War II, this iconic knife is still a favorite of many soldiers. It is a dagger style knife that is ruthless. It is sometimes called the “commando’s knife” because of how deadly it can be when it comes to hand-to-hand combat. A solid gold Fairbairn – Sykes fighting knife is part of the commandos’ memorial at Westminster Abbey. I would also love to have one of the originals for my collection.

The Fairbairn-Sykes was produced in several patterns. The Shanghai knife on which it was based was only about 5.5 in (14 cm) long in the blade. First pattern knives have a 6.5 in (17 cm) blade with a flat area, or ricasso, at the top of the blade which was not present on the original design and the presence of which has not been explained by the manufacturers, under the S-shaped crossguard. Second-pattern knives have a slightly longer blade (just less than 7 in (18 cm)), 2 in (5.1 cm)-wide oval crossguard, knurled pattern grip, and rounded ball, and may be stamped “ENGLAND” (a US legal requirement when importing the surplus knives after WWII, as they had to show the country of origin) on the handle side of the cross guard. ~ Wikipedia

In conclusion, these are the top 12 military knives of all time, as I see it. Which one is your favorite and why? Which one did I forget to include on my list? What do you or did you carry as a knife? Please share your thoughts below. I look forward to hearing from you. Thank you.