In today’s post, we are going to share the top 15 military friendly banks, as we see it. These are banks that cater to veterans, active duty military, National Guard and Reserve personnel. Please keep in mind this is not a paid review, it is just our opinion.

When we assembled this list of the top military friendly banks, a few things we took into consideration were:

You may agree or disagree with our rankings. That is okay. 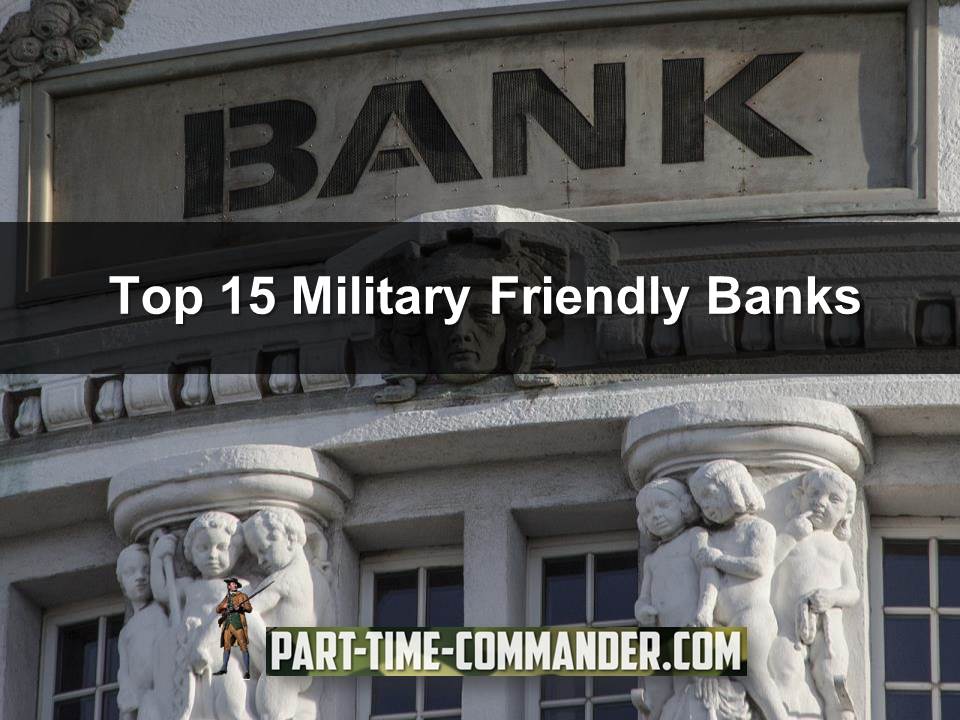 Enjoy the list. We will start at number fifteen and work our way down to number one.

The first company to make our list is Service Credit Union.

Service Credit Union is a full service financial institution with more than 210,000 members worldwide, offering a wide range of financial products to its members. With 49 branches including two staffed 24/7 contact centers, and full internet banking services, Service Credit Union serves all branches of the U.S. Military and Department of Defense including their families and anyone who lives or works in New Hampshire, 4 towns in Cape Cod, MA. With over $2.6 billion in assets, Service Credit Union has, 31 branches in New Hampshire, one in Massachusetts, one branch in North Dakota, 15 branches on U.S. military bases in Germany and a Virtual Branch.

Next, we have Air Force Federal Credit Union.

AFFCU offers many products and services in common with other financial institutions, including savings accounts, checking accounts, IRA accounts, certificates, consumer loans, credit cards, mortgages and lines of credit, as well as small business services. The savings are named “Share Savings” to reflect the fact that with the member’s initial savings deposit of $5.00 they acquire a share of ownership in the credit union.

Coming in at number thirteen we have Tyndall Federal Credit Union.

In 1956, the U.S. Department of Health, Education and Welfare, the forerunner of the National Credit Union Administration (NCUA), chartered Tyndall Federal Credit Union. Headquartered in Panama City, FL, Tyndall has 13 branch locations throughout the Florida panhandle and in south Alabama, as well as a nationwide ATM network. Membership eligibility is extended to almost anyone in Bay, Calhoun, Franklin, Gulf, Holmes, Jackson, Okaloosa, Walton, or Washington County, FL and in Houston, Mobile, or Baldwin County, AL. Tyndall Federal Credit Union remains a leading financial institution in Bay County, now serving over 105,000 members worldwide with assets of more than $1 billion.

First-Citizens Bank & Trust Company is more accessible than some of the other banks on our list, with over 570 branches in 18 states. The bank also provides military-specific benefits, including free checking and savings accounts with perks like with no balance requirements, unsecured installment loans of up to $1,000, car loans, special rates on savings accounts and CDs, credit card loyalty programs, and home financing offers. These features are not necessarily automatic, though, and you might have to meet certain requirements to qualify.

In the number eleven spot we have Langley Federal Credit Union.

Up next we have Fort Knox Federal Credit Union.

Fort Knox Federal Credit Union opened in 1950 for civilian employees. Within a decade, it expanded to military personnel, and membership currently extends to those with various ties to Kentucky as well. A checking account earns you a free suite of services like worldwide ATM use, notary service, early pay and even accidental death and dismemberment insurance — these features got it on this list of best banks for veterans and active-duty military. Fort Knox FCU claims its online banking is so comprehensive that you’ll feel like you have a branch at home, and it helps you manage your finances by providing free budgeting tools. 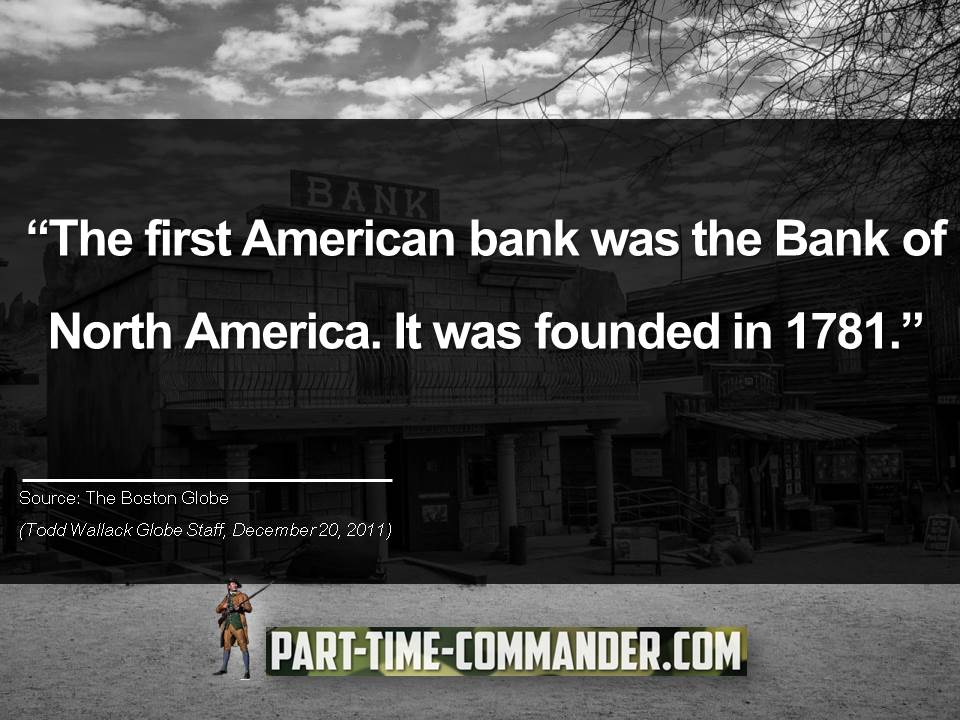 It’s no surprise that Wells Fargo made the list.

Wells Fargo & Company (NYSE: WFC) is a nationwide, diversified, community-based financial services company with $1.4 trillion in assets. Founded in 1852 and headquartered in San Francisco, Wells Fargo provides banking, insurance, investments, mortgage, and consumer and commercial finance through more than 9,000 stores, 12,000 ATMs, and the Internet, and has offices in more than 35 countries to support the bank’s customers who conduct business in the global economy. With more than 275,000 team members, Wells Fargo serves one in three households in the United States. Wells Fargo & Company was ranked No. 25 on Fortune’s 2012 rankings of America’s largest corporations. Wells Fargo’s vision is to satisfy all our customers’ financial needs and help them succeed financially. In 2012, the Company invested $315.8 million in grants to 19,500 nonprofits, and team members contributed more than 1.5 million volunteer hours around the country.

Coming in at number eight we have Arkansas Federal Credit Union.

In the number seven spot we have Randolph-Brooks Federal Credit Union.

RANDOLPH-BROOKS FEDERAL CREDIT UNION is a multiple common bond – primarily military credit union that has 39 branches with approximately 379141 members serving the greater Bexar county area. The credit union first opened 67 years ago in 1952 and is a member of the Federal Home Loan Banks (FHLB). Now with more than $4834 million in assets, RANDOLPH-BROOKS FEDERAL CREDIT UNION employs about 847 people offering various banking and financial related services to its members.

Up next is Andrews Federal Credit Union.

Andrews Federal Credit Union has been open since 1948. It’s the 4th largest credit union in Maryland with assets totaling $1.89 Billion and providing banking services to more than 131,000 members.

Not only that, but Chase supports the military and veteran community through the Veteran Jobs Mission, which they co-founded in 2011. This coalition of more than 235 companies has committed to hiring one million veterans. Chase has hired more than 11,000 veterans as part of this program.

Up next we have Security Service Federal Credit Union.

Security Service FCU offers a wide variety of checking and savings accounts and also student loans. Security Service FCU has branches in Texas, Colorado and Utah, and its membership is open to both civilians and military members. Service members are eligible for deployment loans of $500 to $2,500.

Next on our list is Pentagon Federal Credit Union.

Navy Federal Credit Union is open to active duty and former military members, Department of Defense officers, contractors to U.S. government installations, retired DoD employees, military reservists, or members of the delayed entry program. Additionally, if you are a family member, you can join too.

Out of all of the military friendly banks, can it come as any surprise that USAA takes the top spot?

USAA stands for the United Services Automobile Association. USSA is an unusual bank in that it’s not officially a bank at all. As its name suggests, it’s an association, originally created in 1922 by a group of army officers so that they could insure each other’s cars. Since then, it’s steadily grown, both in terms of the services it offers and the size of the population it serves.

Originally intended for active-duty commissioned officers, it’s now available to anyone who has served honorably in the U.S. Armed Forces, as well as to their spouses and children. 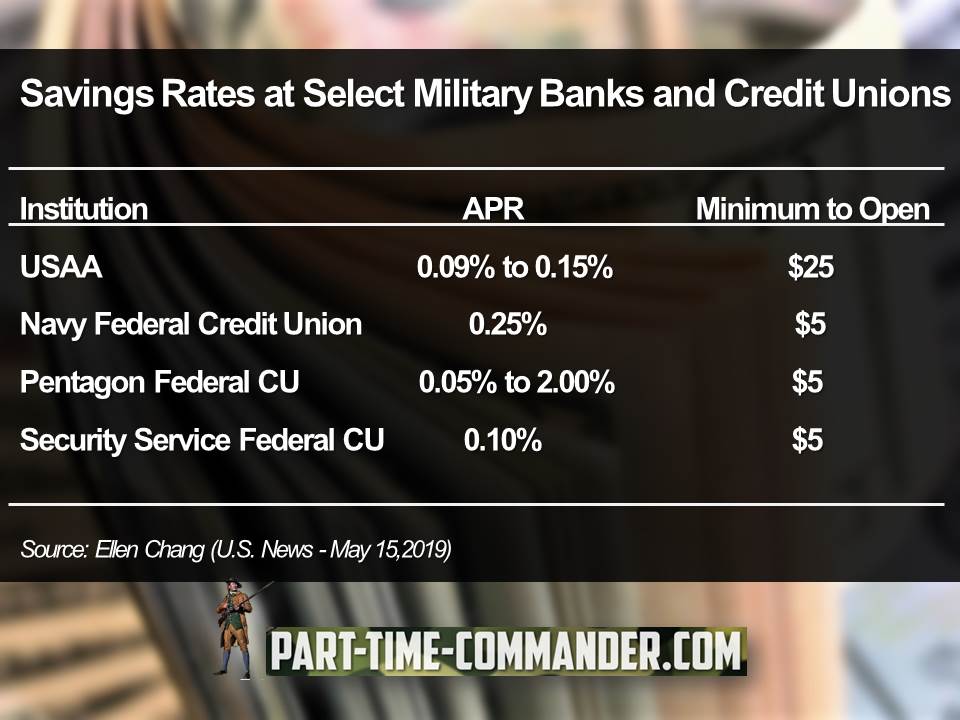