It seems as of late, dog tags have become fashionable. So I am standing at a public urinal and this “kid” wearing a military surplus Army coat, boots that probably haven’t been polished since 1981, and a set of dog tags jingling around his neck is standing in the stall next to me. Giggling under my breath, I thought of Sergeant Ramirez screaming at this kid as Army barbers shave off his man-bun asking him if the dog tags were properly engraved so his mother would know what happened to her son during basic training.

The drill sergeant would have “man-bun boy” weeping with home sickness within 5 minutes of arrival. Dog tags were not designed for fashion. I don’t think so. 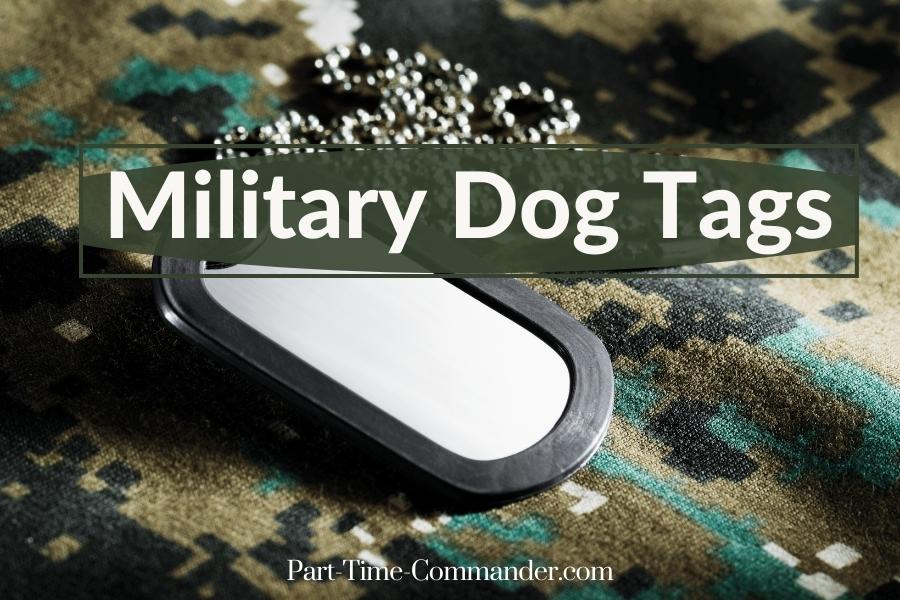 In the paragraphs below, I am going to share the top 10 cool facts about military dog tags. And I really hope Sergeant Ramirez reads this.

Military dog tags are required so your body or remains can be identified if you are killed or seriously injured in battle.

The main purpose of the military dog tags is to identify soldiers that are wounded or killed while they are in action. These dog tags are allotted to the soldiers as a replacement of the plastic printed identity cards because of their resistance to harsh weather conditions and durability. ~ CIM-USA

While military dog tags were not issued during the Civil War, soldiers got creative, because they wanted a way to be identified if they were killed on the battlefield.

Unofficially, identification tags came about during the Civil War because soldiers were afraid no one would be able to identify them if they died. They were terrified of being buried in unmarked graves, so they found various ways to prevent that. Some marked their clothing with stencils or pinned-on paper tags. ~ Defense.gov

There is a story that goes around that the notch on all dog tags is used to “prop” the jaw open of a deceased soldier. The jaw is then kicked to firmly embed the tag on the soldier so it is not lost and he/she can be easily identified.

If someone tells you that, scream foul! It is bullshit! The notch is made from the machine that cuts and stamps these tags. It is how it is held during the automation process. This is a story used as a prank to “gross” people out. Don’t fall for it.

We can say that the first use of dog tags were by the Germans during World War 1. Called Hundemarken, they held as much information as possible about the wearer for medical reasons and identification. The United States Army began issuing dog tags to personnel in 1906 during the 1st World War.

Between 1862 and 1913, while the military considered a number of options for identifying soldier remains on the battlefield, individual soldiers continued to utilize makeshift identification methods. In 1906, a circular aluminum disc was presented. By 1913, identification tags were made mandatory by the military.

The circular tags, hand stamped with name, rank, serial number, unit, and religion were used during World War I. ~ TaskandPurpose.com

It is because the system was based on the same system used to identify dogs. This also came from the Germans.

While dog tags’ origin as a concept is fairly straightforward, the name itself has multiple possible origin stories.

The most prominent origin story holds that William Randolph Hearst, the man who essentially invented yellow journalism, coined the term when describing the possibility of regular citizens receiving nameplates to serve as personal identification. Allegedly, Hearst referred to them as “dog tags.”

A more likely, simpler origin is that the term came from World War II draftees who felt they were treated worse than dogs; in protest, they began calling their identification tags “dog tags.” ~ Duclarion.com

A Dog Tag holds pertinent information about the soldier, such as:

It was also discovered, especially during Vietnam, that dog tags could actually be the cause of death. The 2 metal pieces jingling could bring awareness to the enemy. Special “rubberized” silencers were developed to go around each tag to keep them for hitting each other and making noise.

# 7: But Isn’t The Government (Military) Supposed To Separate From Religion?

It has always been controversial about putting religious preference on dog tags. After all, many believe that the military should be separated from religion.

In the first days, a soldier had only 3 choices in this area…

Now a soldier can add nearly anything. 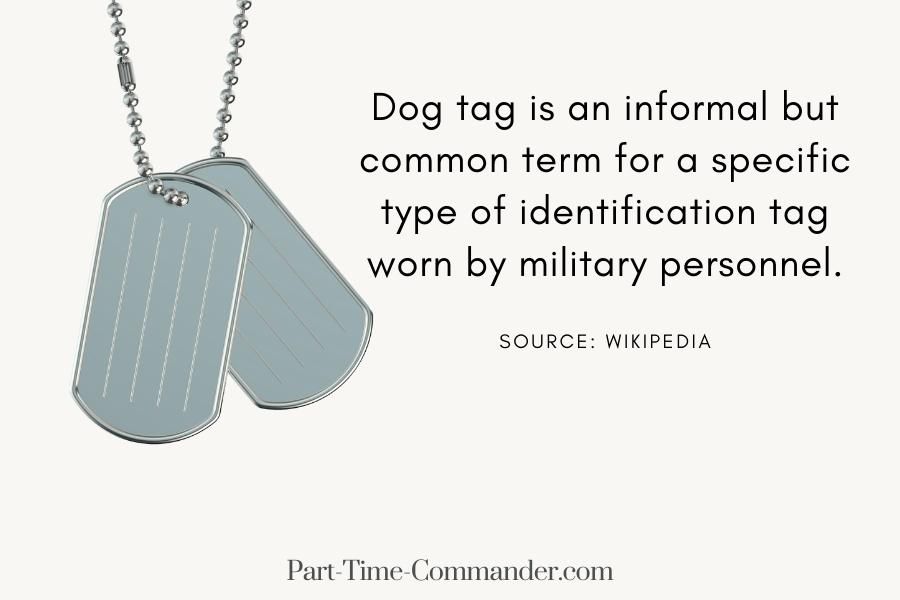 Every soldier is issued two dog tags. In case of death, one stays with the body and the other is used in the process of informing loved ones.

The myth says that there are two chains and the long one has 365 beads and the other, 52. This was supposedly done so a soldier could track days and weeks if captured.

Highly doubtful because the military is so against a soldier getting captured.

# 9: Past, Current And Future Dog Tags

The notched dog tags of the past were M1940 that had stamped text and were primarily made from either aluminum or a copper/nickel alloy.

The current dog tags have the notch eliminated and are made from stainless steel. They are M1967’s and the text is embossed which is raised text like on a credit card.

In the future, the US Army is developing and testing several new dog tags known by various names including the Soldier Data Tag, Individually Carried Record, Meditag, and the Personal Information Carrier. Using RFID (radio frequency identification), microchip or USB technology these dog tags will hold a soldier’s medical and dental records. These will not replace the current dog tag but will be worn in addition to the current dog tags.

It has become a great collection item. Nearly every country issues a type of dog tag to their military personnel. Many types, shapes and sizes are made and can make a cool collection.

If you are in to collecting items like these, you can find many on eBay.

Just as one last piece of advice… Your dog tags are a major part in readiness. Many soldiers have been found neglecting to hang them around their neck and you must remember that any time or any place, that tag may be needed and if it is in your drawer and not on your neck, what good is it?

What are your thoughts about military dog tags? What is your favorite lesson from this article? Leave a comment below to share your thoughts. I look forward to hearing from you.