The purpose of this article is to discuss military discipline.

The military is well known for its discipline. For centuries, Soldiers have been portrayed as fierce, strong, and disciplined warriors.

When I think of my favorite military warriors: General Patton, General Custer, Napoleon and other famous leaders, I see a common trend of military discipline. These leaders achieved great success because of their competence and self-discipline, along with the discipline they instilled in their followers.

Discipline is the major difference between a bad Soldier and an excellent Soldier. 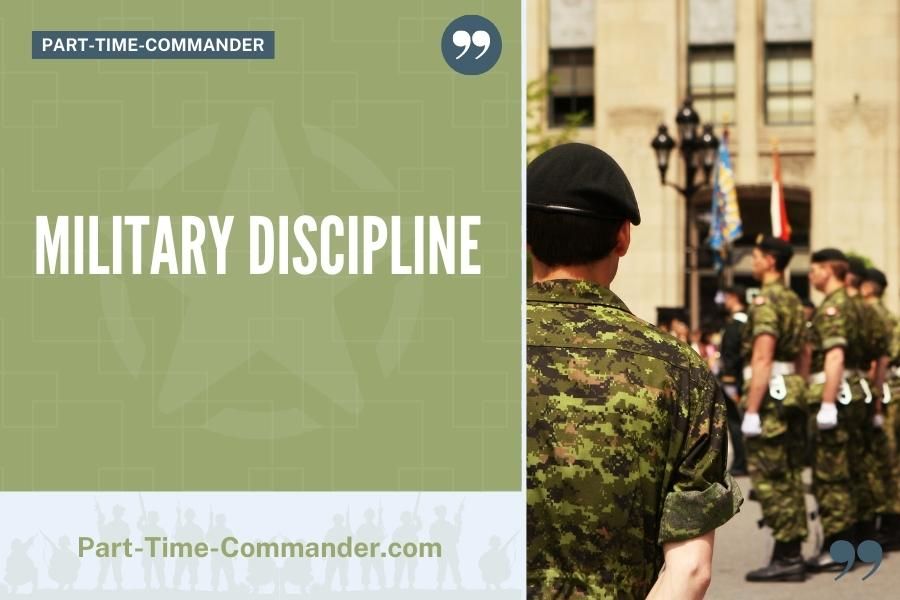 What is Military Discipline?

What is the definition of military discipline? Here’s what I found online:

Discipline or “military discipline” as it is often referred, is defined as the state of order and obedience among personnel in a military organization and is characterized by the men’s prompt and willing responsiveness to orders and understanding compliance to regulation. Often, non-military members view all uniformed military services as organizations that have a very strict set of rules where it takes an enormous amount of discipline to thrive. Much of the perception that the Army is a very disciplined organization is true; from the time a civilian makes the choice to become a Soldier until that new Soldier walks across the parade field as they graduate from Basic training, discipline is a focal point in their training. ~ Army Press

Military Discipline is a state of order and obedience existing within a command. It involves the ready subordination of the will of the individual for the good of the group. Military discipline is an extension and specialized application of the discipline demands habitual but reasoned obedience that preserves initiative and functions unfalteringly even in the absence of the commander. Discipline is created within a command by instilling a sense of confidence and responsibility in each individual. ~ 123Helpme.com

Here are some examples of military discipline, just to give you some perspective.

In my opinion, military discipline is the basic foundation of any successful military unit or military officer.

The best units I’ve ever served in had disciplined leaders who held their followers to high standards and held people accountable (including themselves) at all times. This is an example of good military discipline.

On the other hand, the worst units I’ve ever served in had weak leadership and poor military discipline. As a result, Soldier morale was low and performance was even worse. Can you relate?

No one wants to follow a weak leader or serve in a military unit where Soldiers can do whatever they want. At least, I’ve never met anyone who desired that. 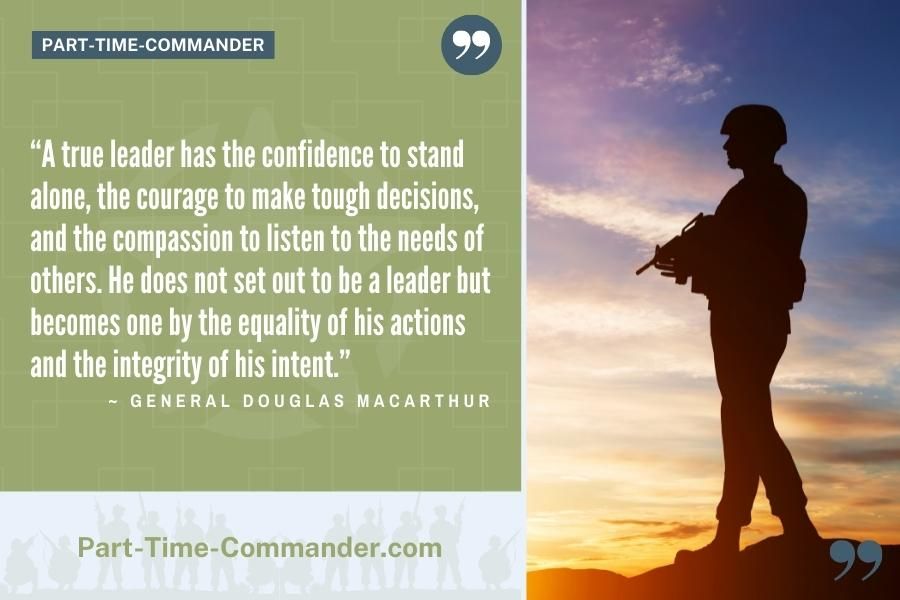 How it all Starts

From day one of Basic Training, Soldiers receive instruction on the Army values, discipline, leadership, and follower-ship. They are taught about the chain of command, the rank structure, and the importance of following orders. Most young Soldiers know what right looks like.

Unfortunately, once they get to their new units they don’t always maintain that level of military discipline. This happens for one of two reasons.

Either they aren’t self-disciplined themselves or their leaders don’t expect them to maintain a high-level of military discipline. Personally, I find it disheartening.

In my opinion it’s the little things that count, such as addressing people by rank, saluting, following orders, standing up when you talk to your superior, standing at attention or parade rest, staying in shape, and so much more.

When these “little things” start to slip, everything else goes down-hill fast. Your job as a leader is to not let that happen. Your job is to maintain the military discipline in your followers.

Throughout the years, military discipline has shifted and changed to comply with the value system of our society.

For instance, several hundred years ago Soldiers could be executed or flogged for what we consider minor crimes today. Today a Soldier can kill a fellow comrade and only get jail time (and he might not even get that). It’s amazing how things have changed in the past hundred years.

We are now a “touchy-feely” and “politically correct” Army where many leaders are more worried about being politically correct than they are about enforcing the Army standard or maintaining military discipline.

My advice to any Army Officer is to lead by example at all times and ALWAYS enforce the Army standards to everyone your supervise. Do whatever it takes to maintain a high level of military discipline in your unit. If you do, you will have competent, disciplined Soldiers with high morale.

If you are looking to improve the military discipline in your unit, I have some helpful hints for you. Here it goes:

This is the starting point to military discipline. Everything starts at the top.

# 2: Take Pride in Everything You Do

Be the best at what you do. Everyone wants to be part of an undefeated, state-championship caliber team. No one wants to be on a winless Junior Varsity Squad. Do you get the picture?

Strive to be the best. It doesn’t matter what your mission is. Remember, the job doesn’t make the person, the person makes the job.

Take pride in everything you do. Instill that same pride in your followers.

# 3: Enforce the Army Standards to Everyone

Soldiers want you to enforce the standards to everyone, not just the lower enlisted personnel. If you hold EVERYONE accountable to the same standards, you will see morale skyrocket.

If your standard is to FLAG someone who fails the Army Physical Fitness Test, then don’t let your staff or senior NCOs and officers off the hook if they fail their APFT. Enforce the standard equally.

Finally, the leader should strive to attain the highest standards in everything they do personally.

Don’t make the mistake of just correcting things when you a see a problem. If you are already addressing mistakes and shortcomings, that’s good. But, don’t forget to praise the people who excel.

If you’re afraid of confrontation, get over it. Your job as a leader is to enforce the standards. Be polite and courteous, but address issues as they arise.

When you see something exceptional, don’t forget to give the Soldier an “atta boy.” Put them in for an award, a unit coin, or simply give them a pat on the back. They will appreciate it. And, it will have a positive impact on morale.

Remember, discipline is discipline. Whether you are in the military or not, you must be self-disciplined to achieve success in life. For instance, if you want to become an actor, you must possess the discipline to obtain your education, build a network of relationships, get a part-time or full-time job to pay the bills, and pursue your dream on the side for as long as it takes to succeed.

Very few people have this type of discipline. And, that’s why so few people become actors (or become successful).

In the military, only the self-disciplined officers progress to the senior ranks. That’s because military discipline is rare even among many officers. To succeed, you must follow the old advice from General Patton: “The only type of discipline is perfect discipline.” 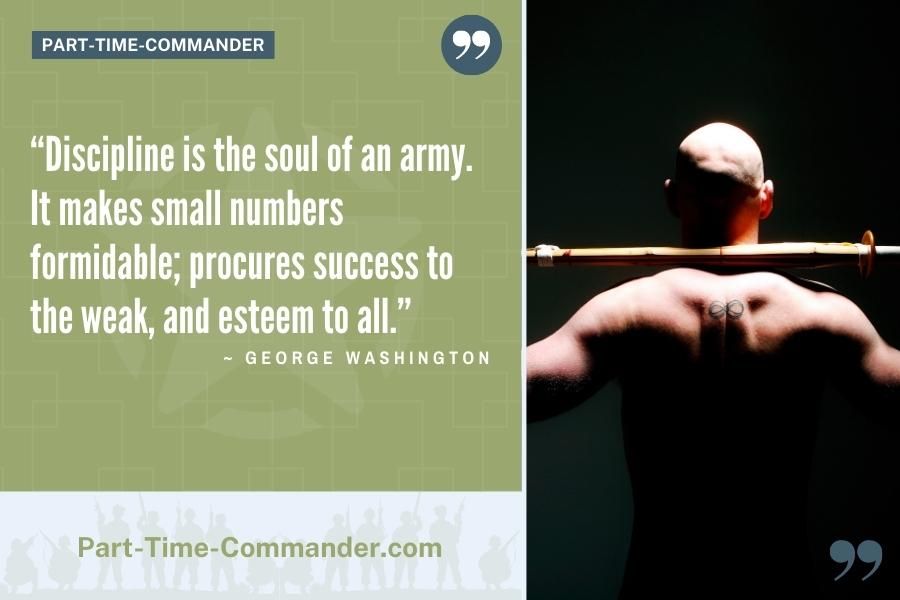 I wanted to take a moment and share a few quotes about military discipline that I thought you would enjoy. After each quote I share my own two cents.

“Discipline is the soul of an army. It makes small numbers formidable; procures success to the weak and esteem to all.” ~ George Washington

In my own words, without discipline, there is no military or Army.

“It is absurd to believe that soldiers who cannot be made to wear the proper uniform can be induced to move forward in battle. Officers who fail to perform their duty by correcting small violations and in enforcing proper conduct are incapable of leading.” ~ General Patton

Leaders have the responsibility to set the example and enforce it.

“The core of a soldier is moral discipline. It is intertwined with the discipline of physical and mental achievement. Total discipline overcomes adversity, and physical stamina draws on an inner strength that says ‘drive on.'” ~ Former Sergeant Major of the Army, William G. Bainbridge

Without discipline, you won’t be able to function as a Soldier, especially in combat.

“Without discipline the Army would just be a bunch of guys wearing the same clothing.” ~ Frank Burns

Discipline is the glue that keeps the Army together.

In summary, military discipline is the foundation of success in any military officer or military unit. Without discipline the Army would not function.

The best units and military leaders maintain a high level of self-discipline and hold their subordinates accountable for their actions.

On a side note, I’d love to hear your thoughts on this subject. Please share your tips and thoughts about military discipline with the rest of our community. Do you think discipline is important in the military? Just leave a comment to this post to tell us what you think.