Today, we’re going to cover the fifth lesson I learned from the Starship Troopers book.  This is the fifth lesson in the mini-series.  If you haven’t read the previous post yet, please do so right now and try to follow it in order.

Lesson # 5: You can’t force someone to be patriotic and love their country.

Quote: “You would find it much easier than to instill moral virtue – social responsibility – into a person who doesn’t have it, doesn’t want it, and resents having the burden thrust on him.  This is why we make it so hard to enroll, so easy to resign.  Social responsibility above the level of family, or at most of tribe, requires imagination – devotion, loyalty, all the higher virtues, – which a man must develop himself; if he has them forced down him, he will vomit them out.” 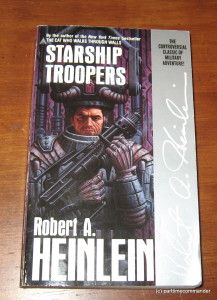 I understand some of you will disagree.  The most common argument is that everyone should serve their country for two years, like Israel does with its citizens.  While there are many merits of serving in the military (discipline, team work, loyalty, doing something great for your country) I don’t believe the experience will be valuable for a person if it was forced upon them.

If you read the quote above that I posted above from the book, you will quickly see that his reasoning is that you can’t force social responsibility on someone who doesn’t want it.  I couldn’t say it better myself.

8 thoughts on “Lesson # 5 from Starship Troopers”