In today’s post, I’d like to talk about the left handed salute in the military, specifically in the Army.

After spending more than 15-years in the military, I only remember two situations where someone saluted with their left hand. The first instance happened while I was serving in The Old Guard, the 3rd U.S. Infantry at Fort Meyer, Virginia. It was the Fife and Drum Corps Drum Major saluting with their left hand during a ceremony. The second time I saw it happen was on television watching Bob Dole salute with his left hand. I cannot recall any other time seeing a left handed salute.

While searching online today, I stumbled across some information about the left handed salute and it inspired me to write this article. I want to do two things:

I’ll start out by sharing what I know and what I learned. At the end of this article you can share your thoughts and input. 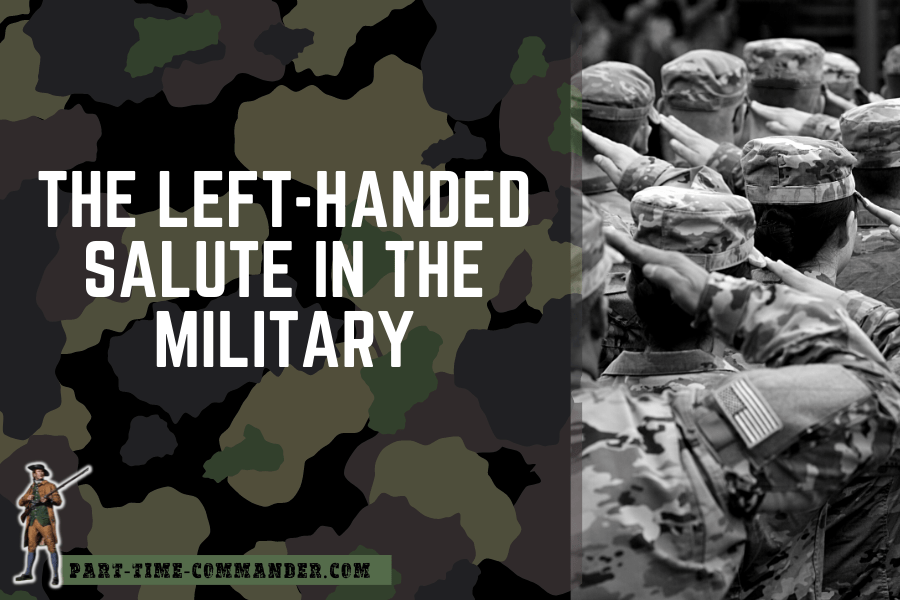 The Left Handed Salute in the Military

Let’s begin by sharing some quotes and facts I found online about the left handed salute.

Fact # 1: Only the Navy and Marines Can Do It

Here’s what I found out about the Navy and Marines:

Actually only the Naval services (Navy and Marine Corps) are authorized to salute with the left hand when necessary. This usually means when your right hand/ arm is incapacitated due to injury but it can also apply at other times. ~ Bridefeed.com

This came as a surprise to me since I saw the Army Fife and Drum Corps Drum Major salute with their left hand. Also, I found out that Bob Dole was a former Army Colonel, not a Sailor or Marine.

Fact # 2: Boatswain’s Mates Can Do It

This second fact nullified the first one. It said that the Fife and Drum Corps Drum Major and a Navy Boatswain’s can salute with their left hand, in certain situations. Here’s what I found:

Did you know that there are only two authorized left-hand salutes for the American Military? Along with the Old Guard Fife and Drum Corps drum major, Boatswain’s Mates are authorized to salute with their left hand when piping a senior officer aboard a ship in either the Navy and Coast Guard. The pipe is held in the right hand when played, and the salute is rendered with the left hand.

The Drum Major as well as the unit he leads, follows Revolutionary War standards of drill and ceremonies. That’s why the left-hand salute and the fact that his salute has the palm facing forward. No one else authorized to render a left-handed salute in uniform, but is there an exception? Yes. Any veteran with a missing or incapacitated right arm is not going to be lectured as to the “proper” way to render a salute. ~ The Drill Master.org

Fact # 3: Guidon Bearers Can Do It

The only other potential scenario where someone can salute with their left hand are guidon bearers. Here’s what I learned:

The left-hand INDIVIDUAL SALUTE while armed is authorized with the left hand for all service guidon bearers and for all Marines, Sailors, and Coasties (Army and Air Force stopped these salutes circa the 1970s) armed with a rifle while at Order or Right Shoulder.

Secondly, why do you not salute with your left hand? The reason one salutes at all is to show an approaching person that you do not hold a weapon in that hand. So it stands to reason you would use the hand that customarily held a weapon.

Secondly, what does it mean to salute with left hand?

Left Handed Salutes. Actually only the Naval services (Navy and Marine Corps) are authorized to salute with the left hand when necessary. This usually means when your right hand/ arm is incapacitated due to injury but it can also apply at other times. Which hand are you supposed to salute with? ~ Find Any Answer.com

Here’s the million dollar question. What is the right answer? Who can salute with their left hand in the military and in what situations? More importantly, what regulations describe this policy? If you know the answers to these questions, please leave a comment below and let us know. If you have any reputable sources you can share with us that explain it, feel free to include a link in your comment so I can update this article, and so other readers can visit the website.

Thanks for stopping by and thanks for your service. Hooah!

Check out this book on Amazon to learn more about the military customs and courtesies.

4 thoughts on “Left Handed Salute in the Military: Good to Know Info”