The year was 2003 when the United States and the United Kingdom invaded Iraq. Many assumed the conflict would be over soon, but it carried on for years. Even today, we have troops stationed in or near Iraq as a new terrorist organization has grown in strength and power.

In interviewing United States Soldiers, a large percentage have been deployed to the Middle East, with a large percentage of them being in Iraq. The war in Iraq was a very long and deadly situation. We owe much gratitude to the men and women who were willing to face the perils in Iraq as members of United State’s Armed Forces.

President Bush signed Executive Order #13363 on November 29th, 2004 which made the Iraq Campaign Medal official. It did not become available until June of 2005, but was awarded retroactive from March 19th, 2003.

Any troops who served in Iraq from March 19th, 2003-April 30th, 2005 who had received the Global War on Terrorism Expeditionary Medal had the option to exchange that medal for the Iraq Campaign Medal. No Soldier could have both medals for the same service period.

3: Only 1 of these medals per deployment.

In most, but not all circumstances, no Soldier should get more than 1 of any of the following medals for any single deployment:

For any Soldiers who have served in Iraq after the December 2011 end of the Iraq Campaign Medal, including those who are now battling ISIS in the unstable environment, they are eligible to receive the Global War on Terrorism Expeditionary Medal.

For an individual to be eligible to receive the Iraq Campaign Medal, they must have been mobilized or attached to the area for 30 days consecutively or for 60 days non-consecutively. The only factors that will make the awarded Soldier eligible without meeting that time criteria are:

Does a Soldier actually have to be right in Iraq? The Department of Defense regulations say that a service member has to be:

An added award that can be worn on the Iraq Campaign Medal Ribbon is an Arrowhead Device. This is awarded when a service member is part of an organized mission of an assault nature. It could be by:

Only 1 Arrowhead Device can be worn.

Some States offer specialty license plates that denote the person who owns the vehicle has been awarded the Iraq Campaign Medal. Before the State will issue the plate, proof of being awarded the medal will have to be shown. Some of the States that offer this are:

You will want to check with your State’s Department of Motor Vehicles to see if they offer this. 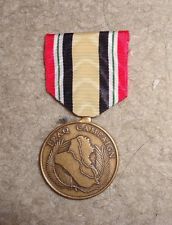 The war in Iraq was both costly in lives lost, damage done and money spent. Many criticisms have been made, and everyone has their opinion, but the one thing that can be said is: we sure had many brave men and women who showed their loyalty and bravery to defend and protect the United States of America at all costs.

Who do you know who has the Iraq Campaign Medal? Shake their hand; give them a hug. They care enough to risk limb and life for all of us.

To all of you who have this medal and are reading this…thank you from the bottom of my heart. We owe so much to you for the service you gave.

Also, to all who are now in Iraq fighting against ISIS, we ask you to be safe and our thoughts are with you. It is men and women like you that make the United States the greatest nation in the world.

Do you have something to share with us about the Iraq Campaign Medal? If so, please leave a comment below. We just ask that you keep it about the award and not about opinions about the Iraq War. Thank you and have a great day.