I remember it like it was yesterday… Fresh out of Officer Candidate School and commissioned as an Infantry Lieutenant. I was a former NCO (Non-Commissioned Officer) with 15 years of service, multiple MOS’ (Military Occupational Specialty- “job”) and a combat tour in Iraq. I was extremely excited for the path that was laid before me.

Infantry was not my absolute first choice of a branch; as a matter of fact, I had two separate lists: one with Military Intelligence as the first choice and the other with Infantry. Believe it or not, the choice came down to a divine intervention when my wife, a student at a Christian university asked a Ministry student about it.

My wife told them “I know as an Infantry Officer, my husband is more likely to be in harm’s way!” These feelings that she expressed were as a result of her knowing what the purpose of a US Army Infantry soldier was; to close with the enemy by means of fire and maneuver in order to destroy or capture him. The student said “maybe God wants Mike to be an Infantryman in order to bring glory to him!” This decision was made within minutes of the deadline to send my OCS cadre the Branch Memo! So off the memo went!

I graduated from my Infantry Basic Officer Leader Course (IBOLC) in February of 2008 at Fort Benning, Georgia and was assigned to Co. C, 3rd Battalion, 116th Infantry Regiment in Leesburg, Virginia. Having been through multiple MOS schools as an enlisted soldier, my expectations going into IBOLC were that I’d have a strong technical grasp with regards to the Infantry like I experienced as a Generator Mechanic and Civil Affairs Sergeant.  After realizing that the role of an Officer is to manage Soldiers (I learned this after a while) and not be the technical EXPERT, I was praying that my Platoon Sergeant would help fill in the blanks. While preparing for my first Drill Weekend as a Platoon Leader (PL), I found a summary of the job description of an Infantry Platoon Leader:

“The platoon leader (PL) leads his soldiers by personal example. He is responsible for all the platoon does or fails to do and has complete authority over his subordinates. This centralized authority enables the PL to maintain unit discipline and unity and to act decisively. The demands of modern combat or full spectrum operations require the PL to exercise initiative without continuous guidance from higher commands. He must know his Soldiers as well as how to employ the platoon, its weapons, and its systems. He relies on the expertise of the Platoon Sergeant and regularly consults with him on all platoon matters.”

Although this is the generic description of what an Infantry Platoon Leader is responsible for, many times, your job description is expanded upon, based on the guidance of your commander. Here is a copy of my job description (my commander’s expectations of me) from my first Officer Evaluation Report:

“Responsible for the training, tactical employment, and logistics of a 34 Soldier light infantry platoon, capable of rapid worldwide deployment in support of any combat and noncombat contingency.  Fights with the platoon and leads by personal example; knows the capabilities of his soldiers and equipment, and how to employ them.  Informs the company commander of the tactical situation as well as the logistical status of the platoon; responsible for all platoon equipment valued in excess of Two Hundred Thousand dollars. Additional duties include Company ESGR Officer, Public Affairs Officer, and Recruiting Officer.” 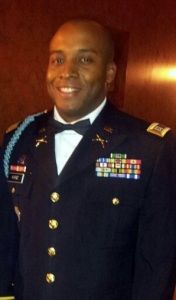 Wow! This was probably the most intense entry level job description that I had ever seen! Some of the intangible “additional duties” that are not covered in the job description are “counselor”, “mentor”, “father figure” and “accountability partner”. These intangible additional duties were probably as a result of being an experienced, older Soldier (34 years old) when I was assigned to my platoon.

During that first year as a PL, I had the privilege of working with some outstanding Soldiers. In the Army National Guard, you find yourself serving with Soldiers that have interesting civilian careers. Within my platoon, I had Soldiers that worked for the U.S. State Department, various government contacting companies and as civilian first responders like EMT’s and police officers.

The unit had just returned from a combat tour in Iraq and we were in the phase of unit readiness that focused on enrolling in professional military education (schools and courses needed to advance in rank) as well as limited individual, team, and/or crew training tasks, such as weapons training and tactics. This was the time when my Platoon Sergeant and seasoned subordinate leaders assisted and empowered me as an Infantry leader while I learned the doctrine (principles of) the Infantry profession.

As a result of their assistance, I matured as a leader, growing from an inexperienced Infantry leader into a highly competent leader and trainer. The highlights of this time as a PL were the platoon’s improvement in the areas of physical fitness, marksmanship, professional development /military education and being the Officer in Charge (OIC) of a weapons familiarization range where we achieved 98 percent qualification without any incidents!

The intangible duties of being a Platoon Leader challenged me and helped me grow as an individual. I remember my initial talk with my platoon where I announced an “open communication/open door policy” to my platoon. I had experienced instances where the officers were classified as unapproachable by the enlisted soldiers. I wanted us to all be the men that we were and hold each other accountable outside of combat so that we would be in sync during combat.

There were a few occasions where I helped my Soldiers to get jobs, start school, etc., but one occasion that stands out was when a Soldier pulled me aside after a long weekend of field training and informed me that they had thought of and eventually, attempted suicide. I was honored that he felt comfortable enough to confide in me.

In the Infantry (and in the Army in general) many Soldiers feel weak if they have life issues and will not share those experiences for fear of being “black listed”. In light of 13 years of war, the Army has increased their efforts with regards to resiliency within members of the Army. I’m proud to announce that we were able to get him the help he needed and he is currently a father of a four year old and is doing well.

Being an Infantry Platoon Leader in the Virginia Army National Guard was very rewarding. Some of the things that I learned from the experience are as follows:

In summary, my time as an Infantry Platoon Leader was PRICELESS. It took me out of my comfort zone, improved upon my strengths as a mentor, trainer and leader and most importantly, it helped me to realize that when you add value to someone’s life, your life is rewarded as well. Finally, it taught me that a Platoon Leader is a responsibility that should not be taken lightly and should be well researched prior to starting your commissioning source, whether ROTC, Officer Candidate School or Military College. You will be responsible for the lives and well-being of up to 40 people; be prepared to serve them WELL! Your thoughts and comments are well appreciated! Follow Me!

Michael A. Kane is a 23 Year veteran of the Army, having served in the Army Reserve and the Army National Guard. He is a combat veteran of Iraq as well as Afghanistan. Michael enjoys being with his family, personal development, promoting strong marriages, music and entrepreneurial endeavors as a Network Marketing Professional. He has been married to his wife, Yanick for almost 16 years and they are the parents of four kids ranging in age from 12 years to 1 year old. He is currently serving as a Captain in the Virginia Army National Guard on Active Duty at the National Guard Bureau as a Mobilization Analyst and in his traditional role as a Platoon Trainer/Instructor at the Officer Candidate School, training the next leaders of the Army National Guard.

3 thoughts on “Infantry Rifle Platoon Leader in the 116th Infantry Regiment: My Experience”