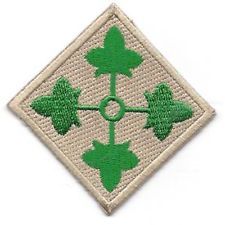 What I want to do in today’s post is share 10 cool facts about the history of the 4th Infantry Division.  My first duty assignment as an Active Duty Army Officer was with the 64th Forward Support Battalion, part of 3rd Brigade Combat Team, 4th Infantry Division at Fort Carson, Colorado.

I spent three years serving in the division and to this day, some 10+ years later it’s still some of my fondest memories.  I was very proud to wear the IVY patch and be part of this time tested unit.  Deploying to Iraq during OIF 1 with the 4th ID was the highlight of my military career.

In the paragraphs below, I will share a few cool facts about the division, to tell you more about the unit history.

It traces its roots back to December 10, 1917 when it was originally formed at Camp Greene, North Carolina under the command of Major General George Cameron.

As of 2015, 18 Soldiers from the division have received the Congressional Medal of Honor, including Theodore Roosevelt, Jr. the eldest son of President Teddy Roosevelt.

The 4th Infantry Division has more than 25 campaign streamers to include St. Mihiel (WW1), Meuse-Argonne (WW1), Normandy (WW2), Rhineland (WW2), Tet Counteroffensive (Vietnam) and the Liberation of Iraq (OIF), to name a few.

The division’s nickname is “Ivy” and their motto is “steadfast and loyal.”

During WW2 4,097 Soldiers from the 4th Infantry Division were killed, 17,371 were wounded in action and 757 eventually died from their wounds.

A patrol from the 4th Infantry Division was the first ground force to enter Germany during World War 2.

From 1950 to 1956 the 4th Infantry Division returned to Germany and stood strong against the communist threat to Western Europe.

The bottom line is that the 4th Infantry Division has a proud history.  It’s served an important role in many wars and conflicts dating back to World War 1.

If you know any cool facts about the 4th Infantry Division, or have served in the unit yourself, I would love to hear from you.  Please share your experiences and war stories with the rest of us by leaving a comment below.

5 thoughts on “History of the 4th Infantry Division: 10 Cool Facts”