Putting Larry the Cable Guy and Bill Engvall together as Delta Force soldiers creates a rip-roaring batch of laughter. And then throw in Danny Trello as Carlos Santana… No, not the great guitar player but a Mexican thug. This movie is hilarious. See it and laugh your @$$ off.

I simply loved this movie when I saw it. Danny DeVito loses his job in Detroit and is given the opportunity of teaching some misfit soldiers at a nearby base. They must pass DeVito’s English course to stay in the Army. This movie had me laughing so hard that I was crying. I highly recommend it.

Starring Joaquin Phoenix, this movie is about a supply specialist based in Germany who just wants action and drama. He finds it all when he is messing with drugs, arms and the First Sergeant’s daughter. This movie was released later than its original date because of the attacks on 9/11.

This movie starring the hilarious Goldie Hawn was a box office hit! I will just tell you that Judy Benjamin (Goldie) is a girl who was raised in prominence and after just getting married, her husband dies while they are in the midst of sex. Judy joins the Army and it is all laughs from there.

While many people are quite aware of the long-running MASH television series, the movie was the start. The movie is about doctors at the 4077th Mobile Surgical Hospital during the Korean War. Hawkeye and Duke are 2 crazy Captains who arrive to discover the whole camp is nutty. MASH is a must see movie. 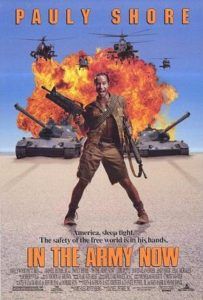 I watched this movie right before I joined the Army.  In this movie Pauly Shore and his misfit friend join a water purification unit in the Army Reserves.  The movie covers their time at Basic Training and their deployment overseas.  If this movie doesn’t make you laugh, I’m not sure what will.

Other posts you should see:

This masterpiece science fiction movie is one of my favorite military movies of all time.  While it might not be considered a comedy by some people, I think there are plenty of funny scenes in it, which is why I have it on this list.  Watch the humans fight the bugs.

Let me start by telling you that it was hard picking a number one choice.  Any one of my top three movies could have been my # 1 pick.  Kelly’s Heroes is an all-time classic.  Starring Clint Eastwood, this movie is a variation of the famous “The Dirty Dozen” movie.  It’s a story where Eastwood and his comrades try to steal a bunch of gold from the Germans during WW2.

Starring Bill Murray and John Candy, this movie will make you laugh until your stomach hurts.  Basically, Bill Murray is a loser who ends up joining the Army.   Watch his story through Basic Training and in the real Army.  If you can watch this movie without laughing, there’s probably something wrong with you. 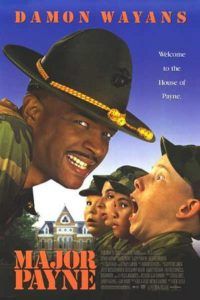 I had to make Major Payne my top choice.  I know some people will disagree with me on this one, but I laughed longer (and more) with this movie than any other movie on my list.  MAJ Payne is a Marine war hero who gets assigned as a JROTC Instructor with a bunch of misfit kids.  This is a must see.