I recently wrote a post about Air National Guard units who have F-15’as their vehicles.

In today’s post, I will tell you what National Guard units in the USA have F-16’s. If you have the passion to fly an F-16, you may want to consider joining the Air National Guard in one of these States.

The F-16 is a single engine, supersonic fighter jet designed by General Dynamics who also produced the fighter jet until 1993 when production was sold to Lockheed Martin.

The F-16 was designed to give the pilot a greater ability to see with the bubble canopy, easier maneuverability with a side-mounted joystick and less stress from G-Forces with a reclined seat.

There are many variants of the F-16 and they are capable of carrying an array of missiles.

The F-16 is also the jet used by the Air Force Thunderbirds.

The United States Air Force (USAF), four of its NATO partners, and Pakistan, a major non-NATO US ally, are the primary operators of General Dynamics F-16 Fighting Falcon. With the evolution of sales under Foreign Military Sales (FMS) contracts, many other air forces have also acquired F-16s. Most nations that have boucoght F-16s continue to use them as of 2010. The F-16 is still in demand today, and many air forces are looking to replace aging inventories with F-16s. Because the USAF has steadily upgraded its F-16 inventory, it will sometimes sell older aircraft it considers obsolete as surplus Excess Defense Articles (EDAs) or as “knockdown” aircraft to supplement spares inventories. ~ Wikipedia 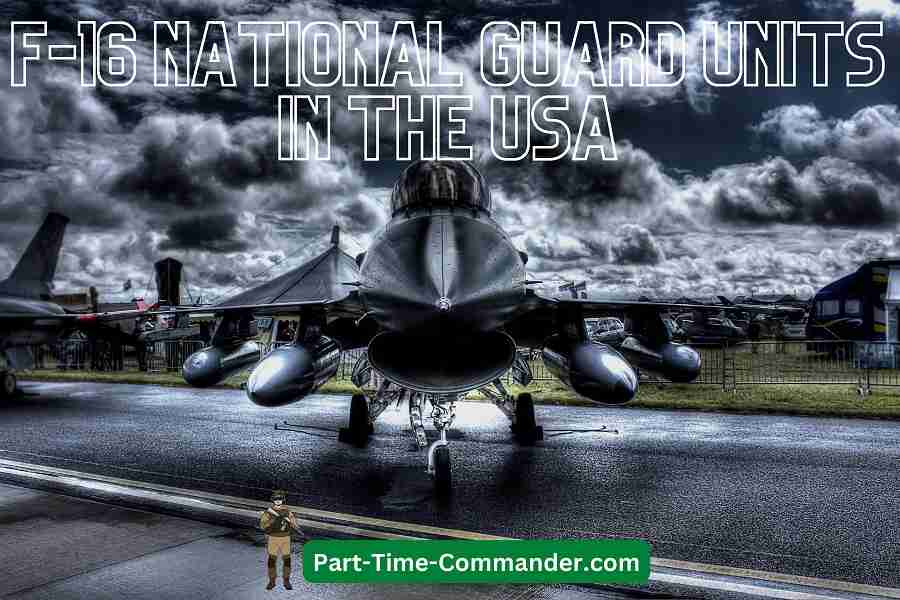 With a cool history, the 100th Squadron was a squadron of the Tuskegee Airmen during World War II.

The 100th was formed in 1942 at Tuskegee Army Airfield and is now headquartered at Dannely Field, Alabama.

At this point in time, the 100th Fighter Squadron flies F-16’s, but they are slated to transition to the new Lockheed-Martin F-35’s by 2023.

This squadron also has an amazing history. They descended from the 112th Aero Squadron from World War I.

The 112th Fighter Squadron has their headquarters at Toledo Air National Guard Base in Ohio.

This Squadron is an active part of the defense of the Great Lakes area.

Also a descendant of a World War I Squadron (5th Aviation School Squadron formed in 1917), the 119th is headquartered at the Atlantic City Air National Guard Base in New Jersey.

This Squadron was launched as a result of the 9/11 airplane disasters. They have also been involved in:

The 119th Fighter Squadron flies the F-16C Fighting Falcon, a compact, multi-role fighter aircraft. It is highly maneuverable and has proven itself in air-to-air combat and air-to-surface attack. It provides a relatively low-cost, high-performance weapon system for the United States and allied nations. ~ 177th Fighter Wing

This Squadron has the distinction of being the first federally recognized Air National Guard Unit. Formed in 1917 as the 120th Aero Squadron, the 102th is headquartered at Buckley Air Force Base in Aurora, Colorado.

The 120th Fighter Squadron is tasked with the protection of the Midwest United States. They also did deploy in 2003 to support Operation Iraqi Freedom. 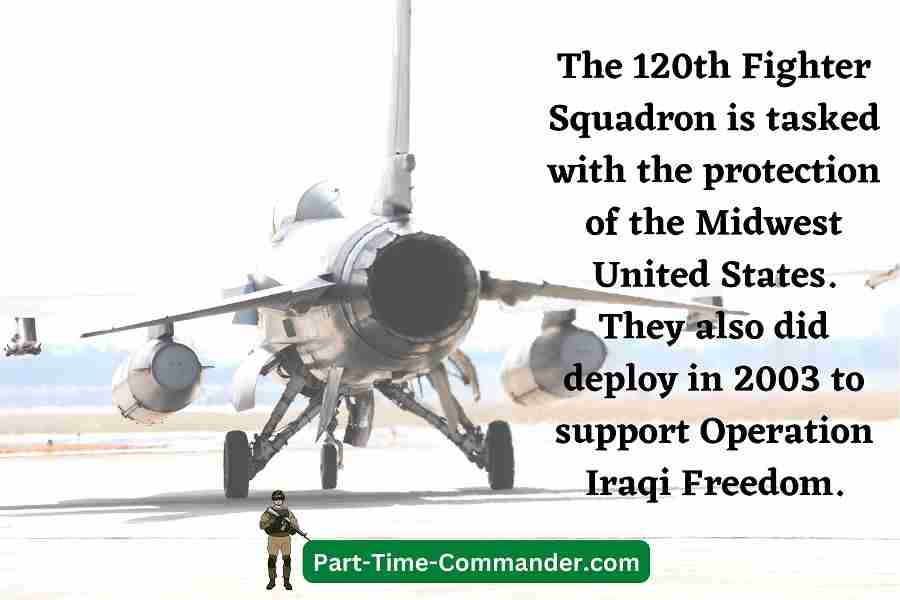 This squadron belongs to the District of Columbia Air National Guard and is headquartered at Joint Base Andrews in Camp Springs, Maryland.

They descended from the 121st Observation Squadron established in 1940.

This Squadron has honors from

On September 11th, 2001, a terrible day, these fighters took to the skies and were authorized to shoot down any threats over the United States capital.

In 2005, pilots from this Squadron came extremely close to shooting down a small Cessna aircraft that was on course for the White House. Just shortly before a missile would be launched into the plane, it changed course.

A descendant of the 125th Aero Squadron established in 1940, the 125th is headquartered at Tulsa Air National Guard Base in Oklahoma.

Deployed several times to the Middle East, this Squadron is ready, willing and able. 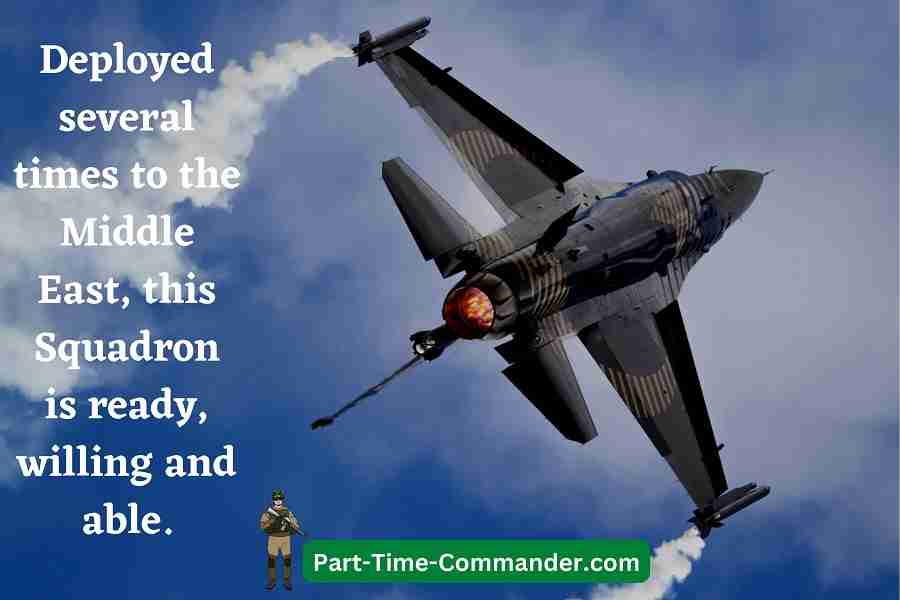 First formed in 1943 as the 393rd Fighter Squadron in California as a result of World War II. They flew many missions in Europe during the war.

After inactivation, the 393rd was redesignated the 179th and given to the Minnesota National Guard. They are headquartered at Duluth Air National Guard Base in the Northern State.

As part of Operation Iraqi Freedom, the 179th was one of the first F-16 unit to be based in Balad AB. Iraq. The 179th deployed more than 200 personnel between April – June 2005. The squadron was mainly tasked with air-to-air and air-to-ground combat operations. ~ Fandom

This is another unit who is tasked with training as a result of F-16 sales. Also headquartered at Tuscon Air National Guard Base in Arizona.

This Squadron is a descendant of the 152d Fighter Interceptor Squadron but does not carry the lineage.

This squadron was activated in 1942 and deployed to Europe in 1943, they flew escort for bombers as they decimated German installations.

The 157th was also deployed for:

The 157th is one of the few Air National Guard units using the HARM Targeting System in their F-16s.

First formed as the 387th Fighter Squadron in 1943, members flew many missions in the European Theater.

Now a member of the South Dakota Air National Guard and tasked with protection of the upper Midwest, the 175th Fighter Squadron is headquartered at Joe Foss Field in Sioux Falls, South Dakota.

This unit is headquartered at Truax Field Air National Guard Base in Madison, Wisconsin.

In 1942, they were formed as the 306th Fighter Squadron and tasked with advanced pilot training.

This Squadron has a mission to guard the skies over the Great Lakes, Wisconsin and Chicago.

Established in 1943 and deployed to the European Theater with their P-47 Thunderbolts, the 182nd proved their abilities fighting German fighters.

The 182nd also served in support operations in the Korean War.

Now a member of the Texas Air National Guard, the 182nd is headquartered at Kelly Field at Joint Base San Antonio.

Based at Tuscon Air National Guard Base in Arizona, the 195th was formed as the 410th Fighter Squadron in Massachusetts and deployed to Europe.

The 410th flew support over Normandy and many other missions in Europe during World War II.

Well, there you have F-16 National Guard Units. If you have dreams of flying one of these bad ass fighter jets, you may consider joining in any of these States.

Any thoughts or questions? Just post any and all below. Thank you.