In today’s post, I will discuss disobeying a direct order in the Army…

I’ll cover what a direct order is, the punishments for disobeying a direct order, and even provide several real-world examples. Keep in mind I am not a military lawyer, so this information is for educational purposes only. 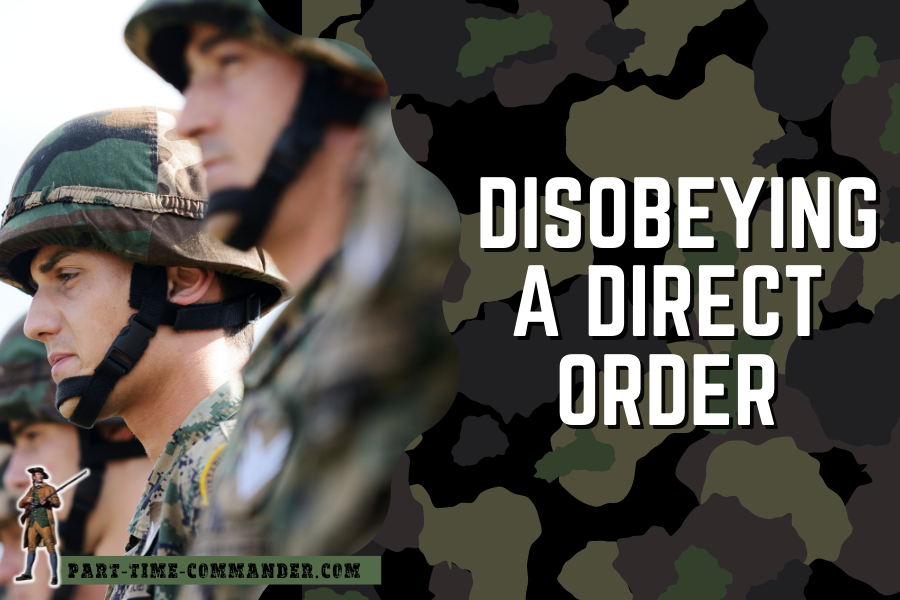 What is a Direct Order in the Army?

Contrary to popular belief, the military is not a democracy. Decisions are made, orders are given, and personnel are expected to execute these orders. Why? This is how the military works. If soldiers were allowed to question (or refuse) every order they received, the military would not be able to do its job, especially in combat. Following orders and discipline are essential to our military’s success.

While serving in the Army (or military) you will receive orders, normally several per day. This is when someone in your chain of command who outranks you orders you to do something. It could be as simple as arriving to formation on time, changing a flat tire, sweeping the office, completing a specific task, etc. Direct orders are normally given face-to-face.

In a nutshell, a direct order is simply a LAWFUL order you are told to do. You don’t have to like it. It doesn’t have to make sense to you. But as long as it is legal, moral, and ethical you must obey it!

Article 92 of the UCMJ

Members of the military are subject to many rules, regulations and laws. Besides having to obey the laws of the United States and their host countries in times of peace under international treaties, they are also subject to a special set of laws made just for them, the Uniform Code of Military Justice or UCMJ.

The UCMJ is federal law, enacted by Congress which applies to all active duty members as well as activated National Guard and Reserve members and military academy students. Some civilians serving in support of the military during wartime are also subject to the UCMJ. ~ Military.com

One of the articles in the UCMJ is Article 92. This article covers disobeying direct orders.

Article 92 defines disobeying a direct order as three types of offenses – violations or failures to obey lawful general orders or regulations, failures to obey other lawful orders, and dereliction of duty. Article 92 charges are common in many prosecutions. It does not take very much effort for the government to find an allegation under Article 92 in most cases. ~ MCMilitarylaw.com 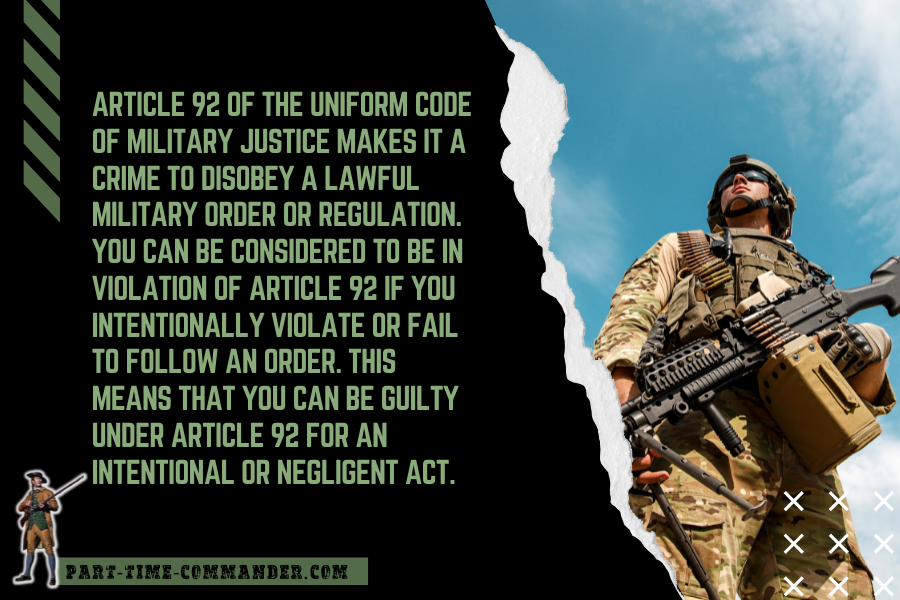 Punishments for Disobeying a Direct Order

Potential punishments for disobeying a direct order could include:

Ultimately, the severity of the order you disobeyed, the environment it happened in (war time vs. peace time) and the course of action your chain of command pursues will dictate your punishment.

The maximum punishment for a violation or failure to obey lawful general order or regulation is dishonorable discharge, forfeiture of all pay and allowances, and confinement for two years.

For violation of or failure to obey other lawful orders, the maximum punishment is a bad-conduct discharge, forfeiture of all pay and allowances, and confinement for six months.

For dereliction of duty through neglect or culpable inefficiency, the maximum punishment is forfeiture of two-thirds pay per month for three months and confinement for three months.

For a willful dereliction of duty, the maximum punishment is a bad-conduct discharge, forfeiture of all pay and allowances, and confinement for six months.

Most orders you will receive will be no brainers. It’s simply tasks specific to your job. You might not like the orders. They might not make sense to you. You might like the person giving you those orders. Either way, if they are lawful orders, you must comply and execute them.

Remember, things get delegated in the Army. Sometimes you will get stuck doing things not in your job description. Suck it up! The Army is a team sport and everyone must pull their own weight. As you rise through the ranks, you will be the one giving orders. You must follow before you can lead!

If you receive an order that is unlawful, it’s important to get clarification. Pull your supervisor aside in private. Address your concerns. If necessary, get a second opinion. However, keep in mind HOW YOU HANDLE the situation is everything. Never disobey orders in public, especially in front of your peers.

One of the biggest cases is the My Lai massacre in Vietnam. Lieutenant William Calley was convicted while 20+ soldiers under his command were not. They committed atrocities against civilians. They followed orders that they never should have.

And there is Army Specialist Michael New who was told he was being sent from Germany to Macedonia as a U.N. Peacekeeper. He refused on the grounds that he vowed to protect the U.S. and not be led by a foreign commander as part of the U.N. He faced court martial and was convicted of disobedience and given a bad conduct discharge. This is still a case that has people reeling. Should soldiers agree to wear U.N. equipment and be led by other country’s military leaders? Again, we would love to hear your views on that. 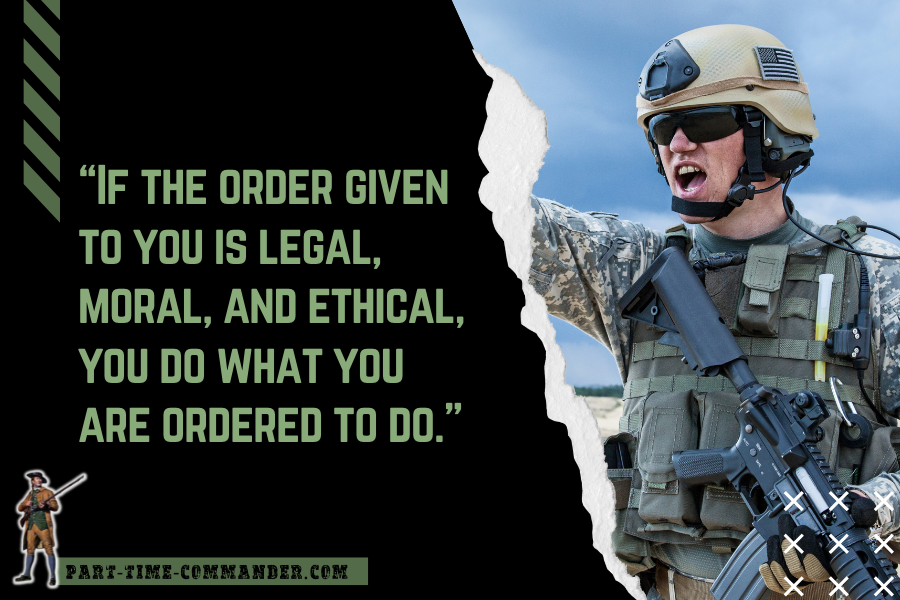 In conclusion, these are my thoughts on disobeying a direct order in the Army (and military). 99.99% of the time, there will not be an issue with the orders you receive. Sure, you might not like the orders, but if they are lawful, you must comply. Failure to obey a direct order can results in many bad things, such as forfeiture of pay and confinement.

In the event you receive a QUESTIONABLE order, seek clarification first. Pull the person aside in private to address your concerns BEFORE taking action. Obeying an unlawful order can also result in punishment, so make sure you do your homework first.

What are your thoughts about disobeying a direct order? Leave a comment below to let me know what you think. I look forward to hearing from you.

If you’d like to educate yourself about the UCMJ, you can order a copy on Amazon by clicking on the image below. The UCMJ is something every Army soldier and leader should have a basic understanding of.