In today’s post, I’m going to share what I believe are the 12 common Army leadership mistakes. I will also tell share some simple and practical ways to overcome these mistakes.

No matter your level of Army leadership, there are some common mistakes that are made. There is even the possibility that you have made these mistakes yourself. That’s okay. We all make mistakes. It is how we overcome and move on after those mistakes that matters most. 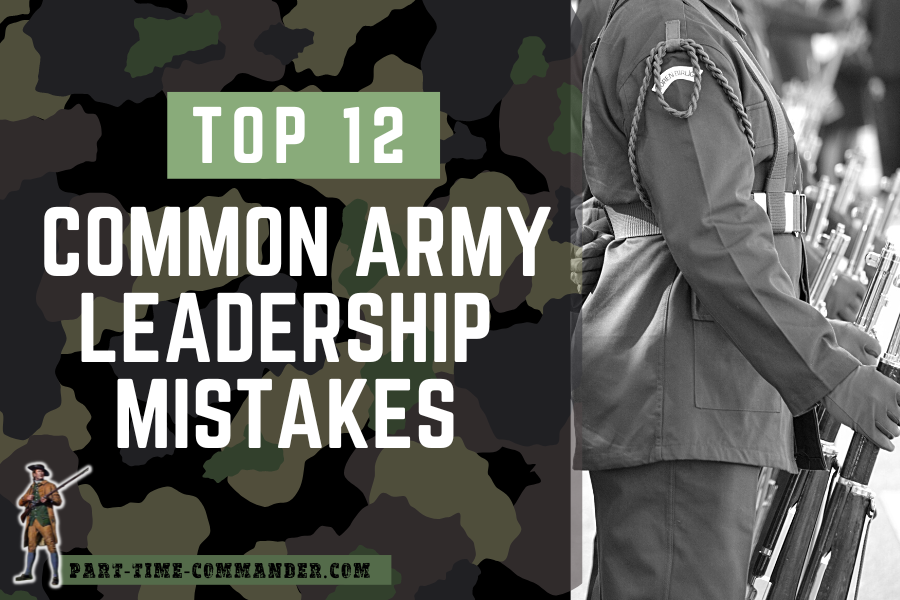 What you see below are my personal observations from 15+ years in the Army.

As military leaders, it’s our job to set the expectations for the people we lead. This happens by doing two primary things.

The first thing is counseling. It’s vital to do an initial counseling in writing with everyone you lead. This covers their job duties and responsibilities and your expectations of them. In addition, you do the required monthly or quarterly counseling (in writing). Doing this properly should prevent 90% or more of potential problems.

The second thing we must do is set a good example. Rather than lead with a whip we inspire others by our own personal example. We do the things we want others to do. This means taking pride in what we do, being good at our job, maintaining our military bearing, and being a professional.

If you don’t do these things, your followers won’t know what to expect from you.

I’d like to add in one additional thing. Remember the words TASK and PURPOSE. Whenever you give a task, share the purpose too. Let them know what needs to be done and why.

Leadership always means that the best leaders will set expectations and do so clearly and convincingly.  They also set high standards in what they expect of others and manage those expectations carefully; for this is the only way to achieve long-term success.

Leaders also hold others and themselves to those standards.  By enforcing them they are setting the example of what right looks right and what works best.  ~ The Leader Maker

# 2: Making Promises That May Not Be Able To Be Kept

Don’t make false promises. Instead, under promise and over deliver. Don’t get your soldiers’ hopes up, only to let them down. That normally backfires and has a huge negative impact on morale.

# 3: Excusing Subordinates From Their Responsibilities

The Army is a team mission, and if one person is not following through with their responsibilities, it will make the whole team look bad. It must be mandatory that you have every person perform their duties. Allowing one person to get away with less than average results tells the rest that you are playing favorites. It’s your job to enforce the standards and hold people accountable.

No one can do everything themselves, nor should they. The people that struggle the most with this issue are “perfectionists” and “leaders who don’t understand their real role.” Remember, as leaders, the Army pays us to get things done through other people. We determine what needs to be done, make a plan, delegate, and supervise.

If you wish to lead a team toward achieving a goal, that means you need to maximize the skills of each team member by playing to their individual strengths. That means giving them things to do based on their abilities, and it also means getting out of their way and letting them handle the tasks you’ve given them.

If you remain completely hands-on through the process, you’re no longer leading—you’re doing. And if you do that, you also don’t have a team—you have a handful of assistants. ~ LifeHack.org

# 5: Being Their Friend Instead Of Their Boss

This can often happen when you are in a leadership position of a unit in which you were just one of the men at one time. It is important that you set friendship to the side and realize that leadership is your role now. If you do not do so, you will be seen as a weak leader. You will have to make decisions your former peers will not like, but if handled properly, they will respect them. Remember, leadership is not a popularity contest.

If you are seeing low morale within your unit, this very well may be one of the mistakes being made. I am not saying every good deed needs to have an award, but just a “great job,” with a pat on the back will give a soldier the recognition they need and desire. What can be even worse is when a leader takes the credit for something one of his/her subordinates achieved.

Find creative, low cost, and simple ways to recognize people, even for the simplest of things. Do not “hoard” recognition. And whatever you do, praise in public and punish in private.

When people look to a leader, they look not only for guidance and reassurance, but also for recognition. Leaders often focus on what’s considered their primary responsibility, which is helping their team figure out what to do next. However, encouraging pride and recognizing success for a job well done is equally important. ~ Achievers.com 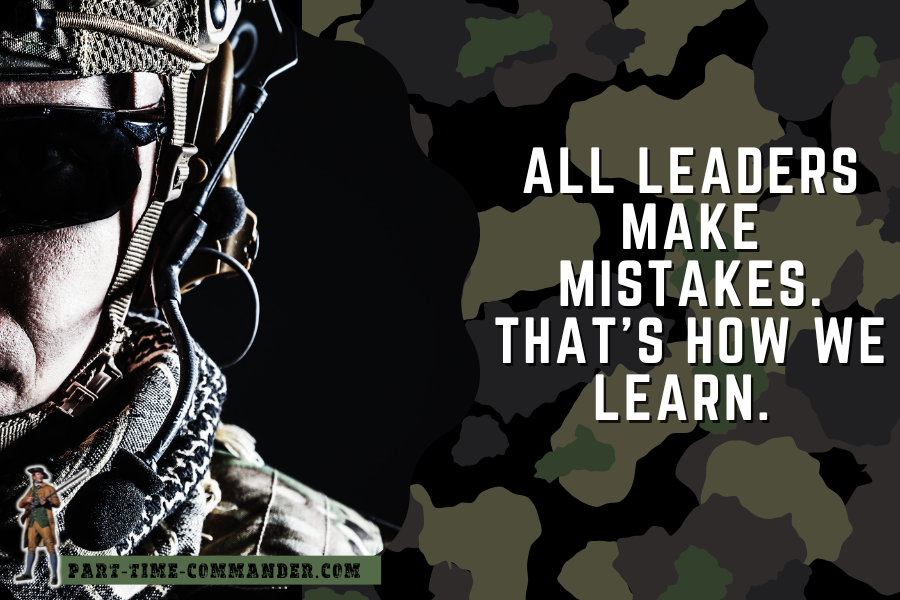 As they say, don’t put off what can be done today until tomorrow. This is a common mistake of humans everywhere and as leaders, we need to show them that procrastinating is not allowed.

We are all emotional creatures. However, no matter what emotions you are feeling, you cannot allow them to guide the decisions you make. If you do, logic leaves and the decision probably will not be the correct one. Instead, collect the facts and make analytical decisions based on numbers, facts, and logic.

Leaders who operate from an emotional-first perspective tend to make more impulsive decisions. Rather than relying on hard data, facts, logic, reasoning and sound judgment, they commonly make decisions on first impressions or emotions. While impulsive decisions can sometimes work out, employees rely on leaders to set the tone for the company and to make decisions from a well-rounded, analytical point of view. ~YourBusiness.Azcentral.com

# 9: Comparing Yourself To Other Leaders

You are not General Patton or Colin Powell; don’t even try to compare yourself with these great leaders. The fact is: you may be better than both of them. You are one of a kind, so understand that. There is nothing wrong with learning from them and even emulating them in some areas. Just don’t compare, because you are in for a let-down if you do, because you will only see the negative side.

If you’re going to compare anything, compare your current performance with what you are honestly capable of.

This is unacceptable for any Army leader. You must be willing to make split-second, difficult decisions. It is better to learn this while you are in a peace zone than when you are trapped in an ambush and need to decide the best course of action. Your Mommy won’t be on the other end of that radio.

I had a mentor once tell me that 99% of the decisions we make as leaders could be made by anyone. It’s the 1% of our decisions that really matter. That’s what we ultimately get paid for. ~ Chuck Holmes

# 11: Not Dealing With Conflicts Quickly And Head-On

When you work with people, conflict will happen. It’s normal. As an Army leader, you MUST confront these conflicts immediately. You may not be liked for your head-on approach, but trust me, you will gain respect. The worst thing you can do is “let things slide” because you are scared of a confrontation.

When you have an issue with someone, pull them aside in private and talk it out. Most conflicts can be solved that way.

Don’t dwell on your past mistakes. If you learned from it, it’s not really a mistake anyway. Understand you are not perfect. You will mess up sometimes. More importantly, the people you lead are imperfect too. They will mess up and disappoint you from time-to-time. Be empathetic and remember that. 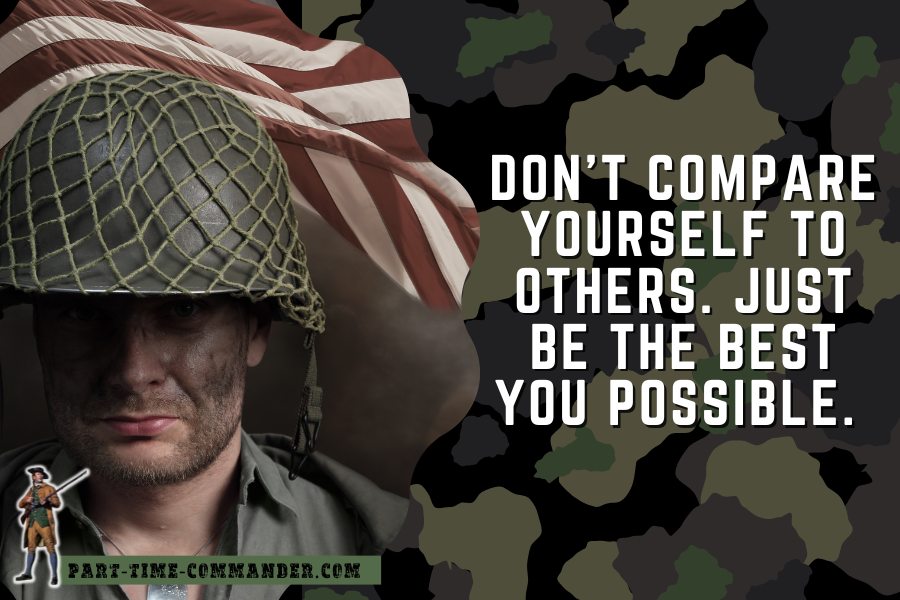 In conclusion, these are the top 12 common Army leadership mistakes, as I see it. We are all human, we all make mistakes. It’s okay. That’s how we learn. The goal is to learn from each mistake and improve, so we don’t repeat it in the future.

What are your thoughts? Please leave your comments and questions below. Thank you.