In today’s post, my goal is to educate you about the Combat Infantry Badge.

I remember the first time I saw one of these badges. I asked my uncle what it meant as I looked at the badge that was a blue color, had a long musket like what was used in the Revolutionary War, and a wreath behind it. Uncle Kenny looked at me and said, “Greg, that is a Combat Infantry Badge that I earned while I fought in Vietnam.”

I smiled and gave him a hug. Mom had told me not to ask him too many questions about the war, because he had a tough time when he first came home from two tours. Remembering his award, I have performed some research, and in the paragraphs below, I am going to provide you with 8 things you should know about the Combat Infantry Badge.

Here are 8 cool things you should know about this prestigious award.

Lt. General McNair was the commanding General of the Army ground forces in World War II. He noticed that morale was quite low, and that very few were willing to join the Army’s infantry. He recommended that a special badge should be given to those who were willing to face the enemy head on as an infantry soldier. The War Department agreed, and on October 27th, 1943 the Combat Infantry Badge (CIB) was created.

After the United States’ declaration of war in 1941, the War Department had difficulty in recruiting soldiers into the Infantry branch in the case when men were given the opportunity to choose their branch of assignment, and the morale of soldiers in the Infantry Branch remained low, namely due to the fact that “of all Soldiers , it was recognized that the infantryman continuously operated under the worst conditions and performed a mission that was not assigned to any other Soldier or unit…the infantry, a small portion of the total Armed Forces, was suffering the most casualties while receiving the least public recognition.” Lt. Gen. Lesley J. McNair, commanding officer of the U.S. Army Ground Forces, championed the idea of creating an award recognizing the unique dangers faced by infantrymen. ~ Wikipedia 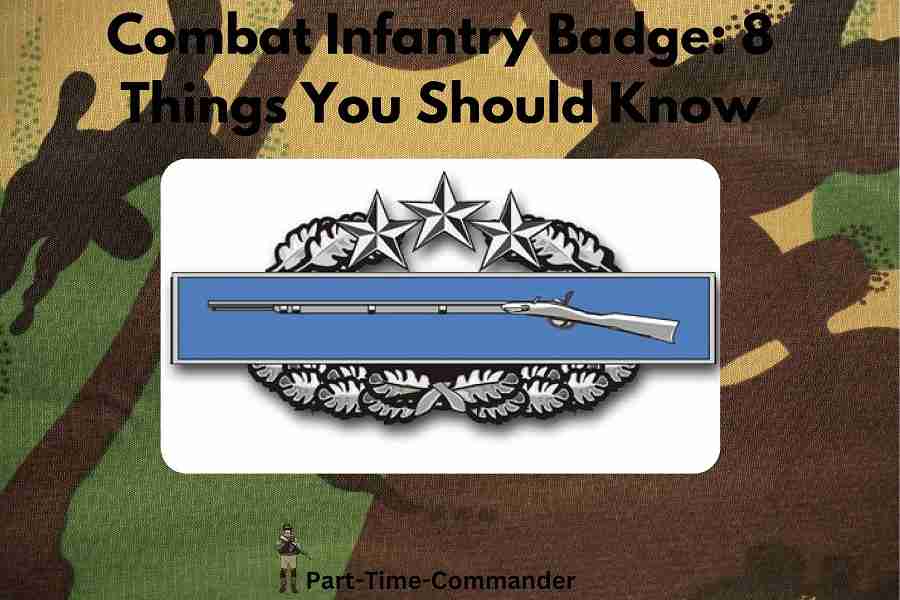 On the Class A uniform coat, the badge is to be worn 1/4 inch above any service ribbons over the left breast pocket, or any other uniforms it is authorized for. The badge is deemed wearable on the Army Combat Uniform.

To be eligible for the Combat Infantry Badge, a Soldier must be an active Army enlisted/officer in either an infantry or a special forces MOS. The rank of the Soldier must be Colonel or below and he/she must meet these three requirements:

The badge was developed during World War II. The wars or conflicts that a soldier can attain the Combat Infantry Badge were, or are:

The only one of the above conflicts allows Soldiers who were in an MOS other than infantry the ability to wear the Combat Infantry Badge was Vietnam. There were many Soldiers who had other than infantry MOS designation who still had to fight actively as ground Soldiers. A special provision was made stating that any officer, warrant officer, or enlisted soldier who under orders engaged in ground combat with the enemy is eligible to receive the Combat Infantry Badge. Vietnam was a conflict that had many Soldiers no matter their MOS involved in ground combat. It was only right that the War Department made this special provision.

It is an honor that very few have attained. Major General David E. Grange, Jr recognized that and as a 3-time Combat Infantry Badge winner himself, he set out to recognize any who have gained that honor. At the National Infantry Museum in Ft Benning, Georgia is a collection of the 324 soldiers who have attained this status. Those who have received it were in World War II, Korea, and Vietnam. 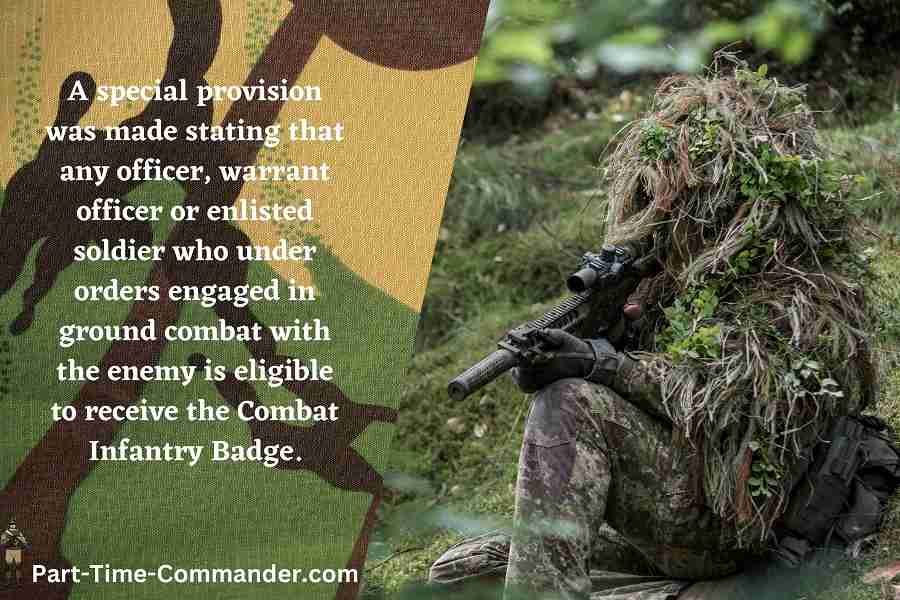 The EIB stands for the Expert Infantryman’s Badge. You know now what the CIB stands for, so which one is the better badge to have. Both badges have similar designs, but the CIB has the wreath, whereas the EIB doesn’t. The fact is: the Soldier who wears the CIB stood through much adversity and faced death. The EIB is earned by testing right on base. Yes, the EIB is a great honor, but more honor goes to the Soldier who wears the CIB. They earned theirs fighting the enemy. If you have an EIB, you still have a right to be proud. It takes a special breed of Soldier to earn it.

This award is closely related to the Expert Infantryman Badge, which was created at the same time. Soldiers who have earned both highly prized badges may wear only one at a time, with the CIB considered the higher of the two. ~ The Salute Uniforms

In review, the Combat Infantry Badge is an honor. Do you have one? Please tell us where you earned it. No matter if you have a CIB or not, if you have been in the war zone and risked your life to serve our country, you have a right to be proud. To all of you, thank you for helping keep America safe from forces bent on destroying her.

If you would like to order a CIB on Amazon, you can do so by clicking on the image you see below: