In today’s post, I’m going to share 8 cool facts about Colonel John Stapp. If you’ve never heard of him before, you are in for a big surprise.

Although Colonel Stapp was not an Army guy, he was a highly respected career Air Force Officer. He was also a flight surgeon, physician, biophysicist, and respected colleague of the legend Chuck Yeager. He was often referred to as “The Fastest Man On Earth.”

Do yourself a favor, sit back, and learn more about Colonel Stapp’s amazing life. 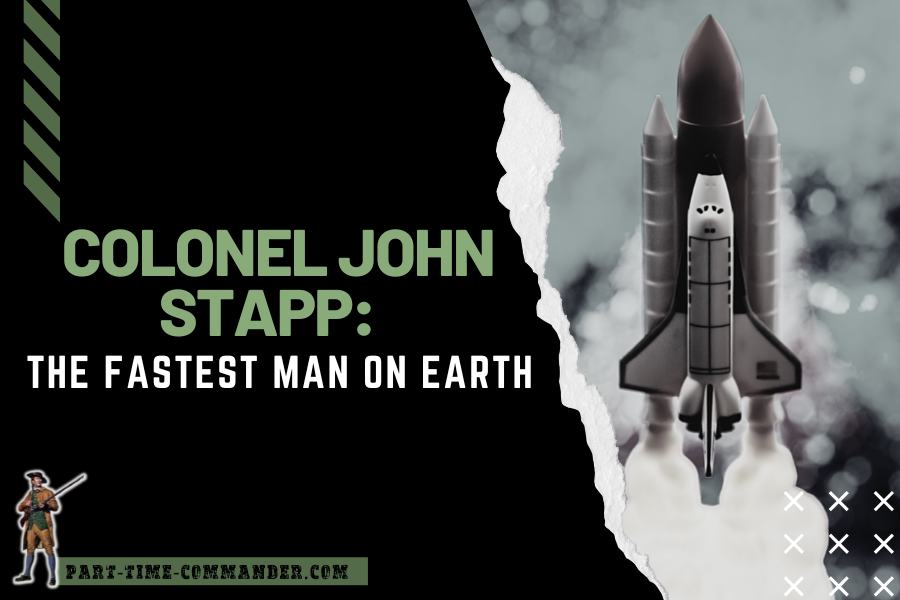 Colonel John Stapp attended Baylor University, the University of Texas, and the University of Minnesota: Twin Cities. He served in the military from 1944 to 1970 and retired as a Colonel. He passed away peacefully in 1999. What you see below are some of the really cool things I found out about him online.

Colonel Stapp was born in Brazil and later migrated to the United States.

John Paul Stapp was born in Bahia, Brazil on July 11, 1910, the son of missionaries (his father was president of the American Baptist College in Bahia). Both of his parents were teachers and taught John at home until he was twelve. He was then enrolled in Brownwood High School, (now the San Marcos Academy) in Brownwood, Texas. Initially, Stapp wished to be a writer, but in 1928, the tragic death of an infant cousin convinced him to pursue a career in medicine. ~ NM Space Museum

The first assignment Stapp had was working with the issues of decompression sickness (the bends) in high altitude flights. He developed an oxygen system that solved the issue which is still used to this day.

In 1946 Dr. John Paul Stapp of the Army Air Forces Medical Corps became a research officer in the aeromedical laboratory at Wright Field. There, as a flight surgeon, he became convinced that a significant pattern lay behind the way some Air Force men died and others survived seemingly equally violent crashes. He set out to discover the reasons by using a high-speed sled at Muroc Air Base to test human reactions to high rates of acceleration and deceleration. ~ Naval Aviation

Colonel John Stapp had the need for speed.

At Holloman Air Force Base in New Mexico on December 10, 1954, the Sonic Wind No. 1 rocket sled let loose 40,000 pounds of thrust and propelled United States Air Force flight surgeon Col. John Stapp more than 3,000 feet in a few seconds. He came to a stop just as fast and experienced a force equivalent to approximately four tons (46.2 g). Although bruised and badly shaken, Colonel Stapp survived without permanent injury and walked away with the world land speed record, 632 miles per hour. (That is faster than a 45 caliber bullet shot from a pistol!) ~ AirandSpace

Don’t try this at home kids!

But all came out well in the end.

Dr. Stapp found that the effects of high G’s were lessened if seats in planes were turned backwards. The military agreed and most seats in military aircraft were changed to face the rear. More people would survive sudden crashes with seats facing backwards.

Many people, who know this, wonder why all major airlines still have passenger seats facing the front. 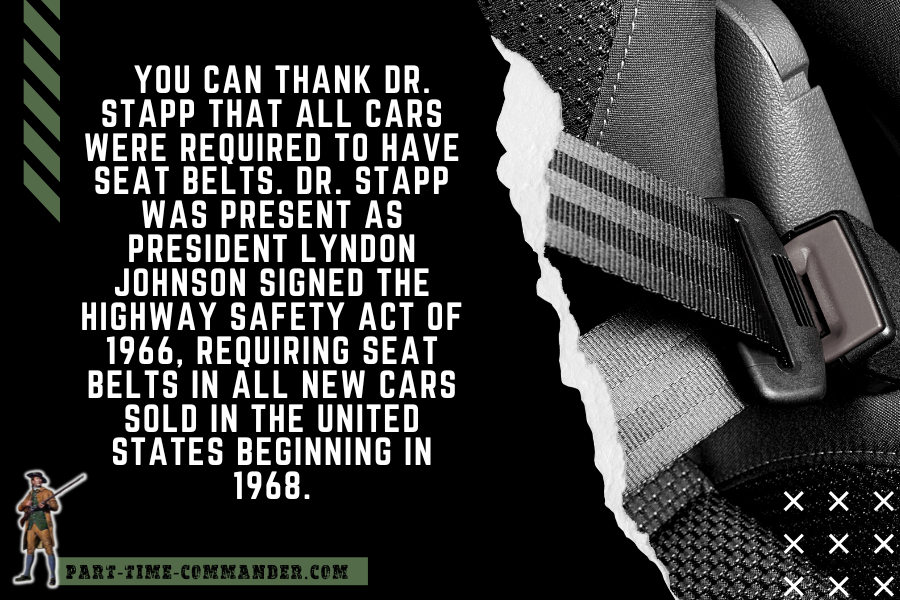 You can thank Dr. Stapp that all cars were required to have seat belts.

Dr. Stapp was present as President Lyndon Johnson signed the Highway Safety Act of 1966, requiring seat belts in all new cars sold in the United States beginning in 1968.

The Highway Safety Act of 1966 (P.L. 89-564, 80 Stat. 731) established a coordinated national highway safety program to reduce the death toll on the nation’s roads. The act authorized states to use federal funds to develop and strengthen their highway traffic safety programs in accordance with uniform standards promulgated by the secretary of transportation.

Colonel Stapp worked closely with Captain Murphy. In one experiment, Captain Murphy made a mistake of not wiring the gauges correctly. Maybe you have always wondered who originally coined “Murphy’s Law?” It was Stapp…

“Anything that can go wrong, will!”

“The universal aptitude for ineptitude makes any human accomplishment an incredible miracle.”

As I ponder that last fact, I just realized I have performed a miracle. I finished this post!

We owe much thanks to Colonel John Stapp. His research and inventions have saved many lives and will continue doing so. Let’s hear your thoughts. Leave a comment below to let us know what you think.

Check out this book “Sonic Wind” about Colonel Stapp, available on Amazon.