It was the American Revolution and the people who had sailed miles upon miles to settle in this land of infinite possibilities were sick and tired of the British government being a bully and taxing the people but not allowing them any representation in the say of how that government would run.

Leaders in the new land… America… They decided it was time to break the chains that held them indebted to Great Britain. The American Revolution began.

There were many battles during the American Revolution. In today’s post, we are going to look at the Battles of Saratoga. Here are 8 facts.

In the spring of 1777, the British ordered three of their armies to merge in Albany, New York. Only one army, however, commanded by General John Burgoyne, made the final push to its destination. Waiting for them was the heavily-fortified Northern Department of the Continental Army, commanded by General Horatio Gates. ~ History 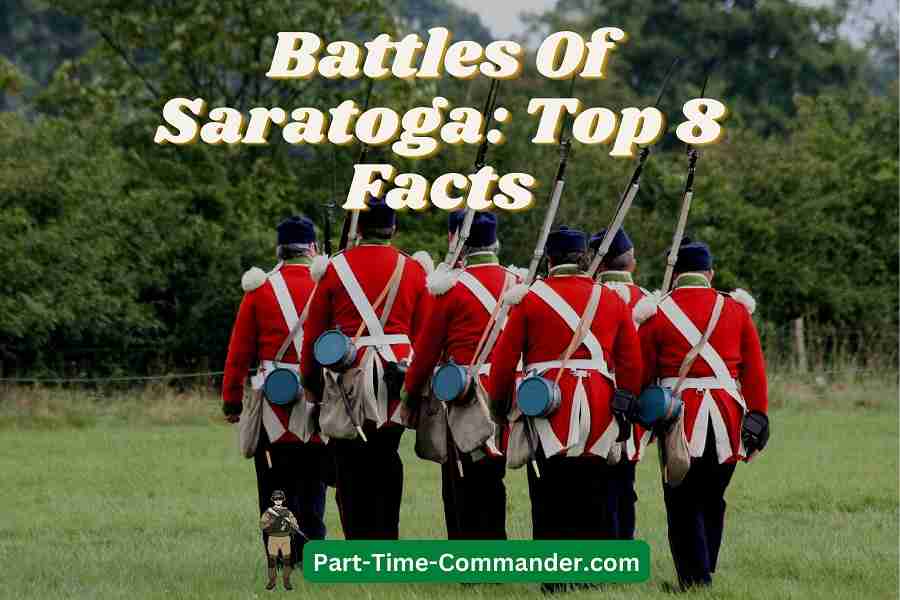 If you see or hear anyone just say the Battle of Saratoga, you may want to ask which one. There were actually 2 Battles. One was on September 19th, 1777 and the other was October 7th, 1777.

These Battles took place near what is now Schuylerville and Stillwater, New York in Saratoga County.

#3: A Divide And Conquer Strategy

The British General in charge of the assault John Burgoyne. His strategy was to bring his troops South from Canada through the Hudson River Valley and Sir William Howe would bring his troops North from New York City and New Jersey to meet in Albany.

They would also be assisted by Indian allies and would separate as many American troops as possible (Divide) in these marches.

The General believed this move would put all of New England in isolation giving the British the ability to conquer.

Burgoyne divides his army, numbering about 7,500, into three columns. He wants to use each column to probe American defenses. Col. Daniel Morgan’s light infantry engages with the center column near Freeman’s Farm. It is a hotly contested fight, with the field changing hands several times. By evening, the British, reinforced by 500 German Hessians, hold the field, but the action has blunted their forward motion. Having lost almost 600 troops and expecting to be reinforced by Gen. Henry Clinton, coming from New York City, Burgoyne choses to dig in. ~ American Battlefield Trust

The leaders on both sides were:

The first of the Battles of Saratoga was a small victory for the British. 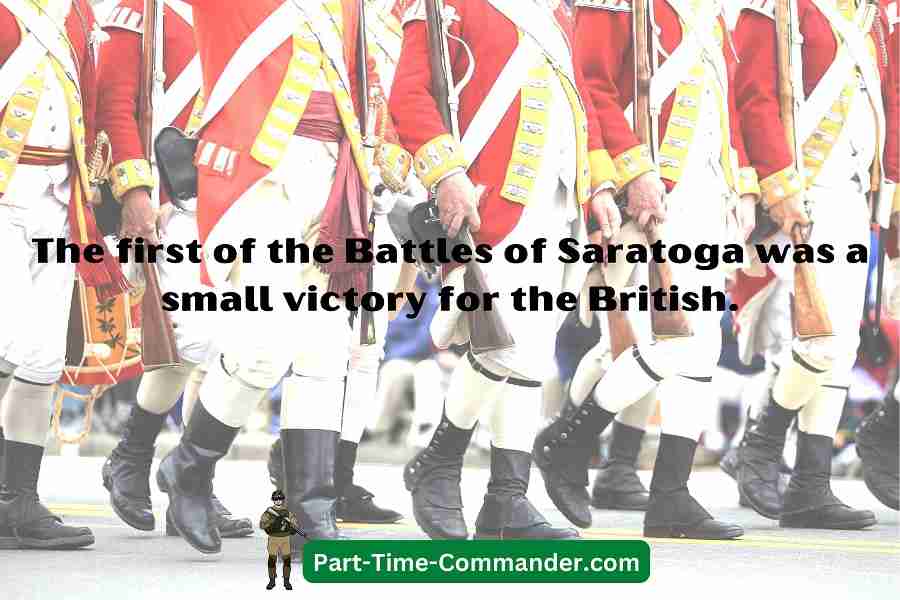 After General Burgoyne had the small victory against the Americans in the first battle, he chose to dig in hoping the other British forces would come from the South. During this time, the Americans grew their forces and when the time came, they attacked and overwhelmed the British forcing the surrender of Burgoyne and his troops.

The Battles of Saratoga lifted the American morale in a great way. You see, this was the first surrender of British troops in the American Revolution.

Burgoyne had lost 1,000 men in the two battles, leaving him outnumbered by roughly 3 to 1. American losses came to about 500 killed and wounded. Burgoyne had also lost several of his most effective leaders, his attempts to capture the American position had failed, and his forward line was now breached. After the second battle, Burgoyne lit fires at his remaining forward positions and withdrew under the cover of darkness. He withdrew his men 10–15 miles north, near present-day Schuylerville, New York. By the morning of October 8, he was back in the fortified positions he had held on September 16. ~ Wikipedia

To preserve the memory of the Battles of Saratoga, Saratoga National Historic Park was developed. You can see more about this park by visiting this link.

The Battles of Saratoga gave the American Colonial Forces the courage and morale to keep going and not give in to the British… All except one.

That is the last fact I will give in this post:

One of the heroes of Saratoga was Benedict Arnold. But because he was not given the recognition he felt he deserved, he began spying for the British. He is the only one who would give in to the British and we all know that in the end, Freedom reigned!

Do you have any questions or feedback?

Just post them in the comments area below. Thank you.