Today, we are going to discuss the Army Warfighting Functions. This is good to know information for any commander or staff officer.

After doing some research online, here is the best definition I could find.

In the paragraphs below, I will list each of the 6 Army Warfighting Functions and share some additional insights. 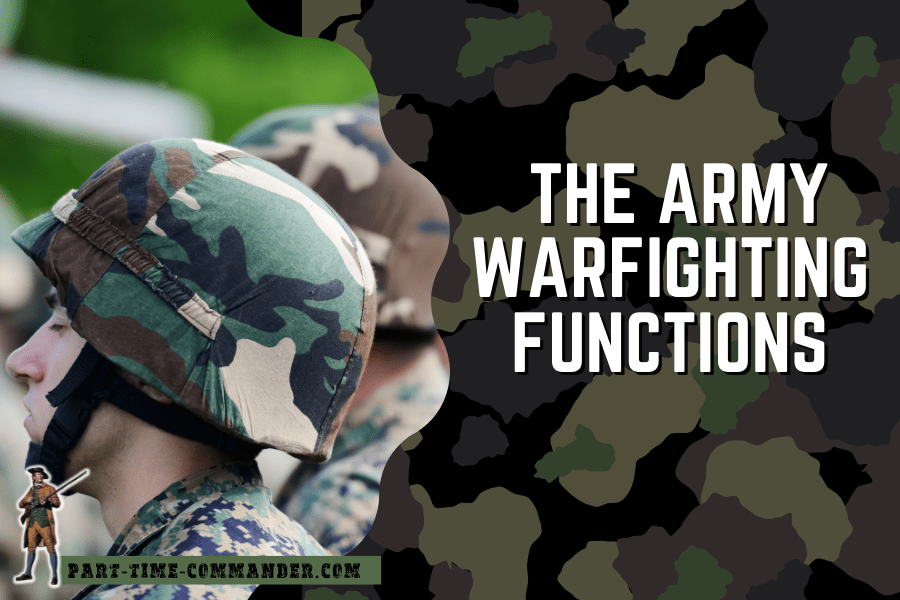 The Mission Command function allows commanders to balance their command and control duties while integrating the other Warfighting Functions. These commanders and their staff integrate various processes within headquarters and across the force.

Decisions need to be made and executed quickly. Mission command should cascade down the ranks through the NCOs to the formations at large. Trusting and empowering subordinates to act, within the commander’s intent, is a force multiplier. In the dynamic environment of LSCO, self-reliance and aggressive action are key. Trusting a subordinate to plan and execute a mission objective enhances efficiency and places the U.S. at an advantage against its near-peer rivals. ~ Army U Press

This Warfighting Function is the process of deploying troops to operational areas as well as maneuvering troops, equipment and arms to gain advantage over the enemy. These movements may be partial or complete.

The movement and maneuver warfighting function is the related tasks and systems that move forces to achieve a position of advantage in relation to the enemy. Direct fire is inherent in maneuver, as is close combat. The function includes tasks associated with force projection related to gaining a positional advantage over an enemy. One example is moving forces to execute a large-scale air or airborne assault. Another is deploying forces to intermediate staging bases in preparation for an offensive. Maneuver is the employment of forces in the operational area through movement in combination with fires to achieve a position of advantage in respect to the enemy in order to accomplish the mission. Maneuver is the means by which commanders
mass the effects of combat power to achieve surprise, shock, and momentum. Effective maneuver requires close coordination with fires. Movement is necessary to disperse and displace the force as a whole or in part when maneuvering. Both tactical and operational maneuver require logistic support.

Intelligence is the process of understanding the enemy using all information on the enemy, civilians nearby, and the terrain and weather conditions. This process is ongoing and commanders use tasks in:

The intelligence warfighting function tasks facilitate the commander’s visualization and understanding of the threat and other relevant aspects of the operational environment. These tasks are interactive and often occur simultaneously. ~ IRP Fas

Controlling indirect and direct fires is ultra important. This function provides Army leadership the means to use a targeting process in relation to indirect fires, missile defense, and joint fires in a way that keeps United States troops safe while delivering fires in support of offensive or defensive operations.

The fires warfighting function is the related tasks and systems that provide collective and coordinated use of Army indirect fires, AMD, and joint fires through the targeting process. Army fires systems deliver fires in support of offensive and defensive tasks to create specific lethal and nonlethal effects on a target. The fires warfighting function as defined by the Army includes the following tasks: Deliver fires, integrate all forms of Army, joint and multinational fires, and conduct targeting. ~ Wikipedia

This Army Warfighting Function is the process of ensuring Army forces have everything they need to complete their missions. It is about endurance, freedom of action, and extending the operational reach. It is keeping forces supplied with

The sustainment warfighting function is the related tasks and systems that provide support and services to ensure freedom of action, extend operational reach, and prolong endurance. The endurance of Army forces is primarily a function of their sustainment. Sustainment determines the depth and duration of Army operations. It is essential to retaining and exploiting the initiative. Sustainment provides the support necessary to maintain operations until mission accomplishment. ~ Lightning Press 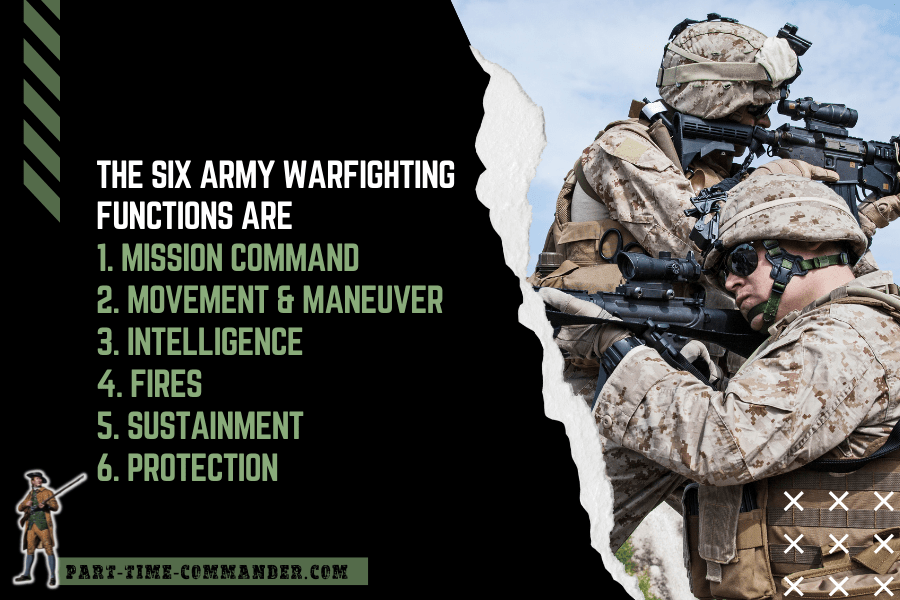 Protection determines the degree to which potential threats can disrupt operations and then counters those threats. It means preserving the force which includes personnel and physical assets of the United States as well as the host nation and any military or civilian allies.

The protection warfighting function is the related tasks and systems that preserve the force so the commander can apply maximum combat power to accomplish the mission (ADP 3-0). Preserving the force includes protecting personnel (combatants and noncombatants) and physical assets of the United States, unified action partners, and host nations. Protection is not a linear activity—planning, preparing, executing, and assessing protection is a continuous and enduring activity. Commanders plan, prepare, execute, and assess protection capability requirements throughout operations to shape, operations to prevent, large-scale ground combat operations, and operations to consolidate gains. Protection efforts must consider and account for threats and hazards in all directions, at all times, and in all environments. The protection warfighting function enables the commander to maintain the force’s integrity and combat power. ~ Army Pubs

I have read and heard many who claim that the Army Warfighting Functions just create more red-tape and are not needed. Personally, I disagree.

Since instituting the Army Warfighting Functions, the U.S. military has worked in better partnership on joint military operations. Plus, there has been less friendly fire incidents.

I must add that many would say that Special Operations is a separate Army Warfighting Function. While that may be correct, I did not list it here because I believe Special Operations itself, uses the six above, which would make it a unit using the system.

The system is duplicatable and is used from the smallest of units up to large battalions and brigades. I believe the system works but I would like to hear your opinion.

What do you think about the Army Warfighting Functions? Please leave your comments and input in the comment section below. Thank you for stopping in today and please share this post with others.

If you’d like to learn more about this subject, check out the book you see below on Amazon.