In today’s post, I’m going to educate you about the most common U.S. Army Unit Sizes. For people serving in the military, most of this information is common knowledge. To civilians, some of these terms might sound foreign.

When you consider the United States Army’s hierarchical structure, it is actually simple in a complex kind of way. Every Army unit fits within another Army unit all the way up the line. If I had to compare it to another organization, I believe the United States Army closely resembles the police department, fire department, or Catholic Church structures. Each organization has its own role and mission, but is also part of another unit.

Many other countries have “copied” our system because it works, and it works quite well. 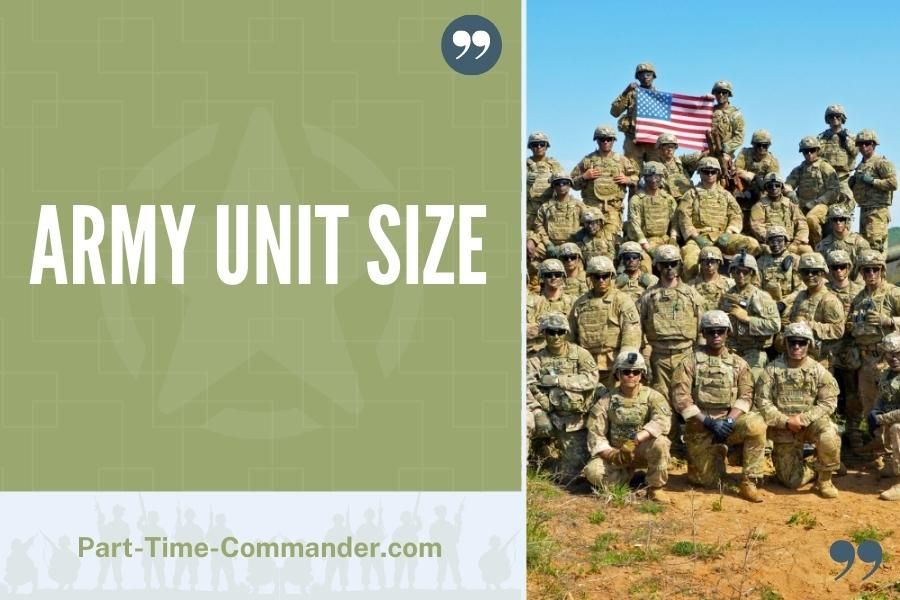 Starting at the lowest Army unit and working up, I will explain the different Army Unit Sizes. Keep in mind that each unit normally fits within all the units above it.

A Fire Team is normally used for special missions or recon. It is usually comprised of four Soldiers and led by a Corporal or Sergeant. It consists of two riflemen, a grenadier, and an automatic rifleman.

The Army’s smallest maneuver element controlled by a leader is the fire team. The fire team is the building block for all Army tactical operations. Fire teams make up squads; squads make up platoons. Army lieutenants lead platoons as part of an infantry rifle company. ~ Akron.edu

Usually led by a Sergeant or Staff Sergeant, a squad may have from four to ten Soldiers.

In military terminology, a squad is amongst the smallest of military organizations and is led by a non-commissioned officer. NATO and US doctrine define a squad as an organization “larger than a team, but smaller than a section. US Army doctrine further defines a squad as a “small military unit typically containing two or more fire teams.” In US usage, a squad consists of eight to fourteen soldiers, and may be further subdivided into fireteams. ~ Wikipedia

In some cases, there are sections which are two squads. Examples of a section might include the Personnel Section or S4 Section.

The section is used as an administrative formation and may be bigger than the regular squad formation often overseen by a Staff Sergeant.  ~ Military History Fandom

A platoon is normally comprised of three to four squads or sections… 16 to 44 Soldiers and is normally led by a Lieutenant and an NCO is second in command.

Platoon, principal subdivision of a military company, battery, or troop. Usually commanded by a lieutenant, it consists of from 25 to 50 men organized into two or more sections, or squads, led by noncommissioned officers. ~ Britannica.com

Normally commanded by a Captain, a company is a unit that contains anywhere from three to five platoons which means 60 to 200 Soldiers. If they are an artillery unit, it is called a Battery and some Cavalry units call it a Troop.

A company is a military unit, typically consisting of 80–250 soldiers and usually commanded by a captain or a major. Most companies are formed of three to six platoons although the exact number may vary by country, unit type, and structure. Several companies are grouped to form a battalion or regiment, the latter of which is sometimes formed by several battalions. ~ Military Fandom

A Battalion consists of four to six companies and will have anywhere from 300 to 1,000 Soldiers. Battalions are normally led by a Lieutenant Colonel and a Command Sergeant Major serves as the top ranking NCO.

Battalions are organized into various smaller units. An army battalion is a mid-size military subdivision generally commanded by an officer around the rank of Colonel . Depending on the particular army, a battalion can consist of anywhere from several hundred to more than a thousand troops, themselves organized in numerous smaller units. ~ Wise Geek

Now here is where things can get somewhat confusing for many people. Brigades are an independent unit with Brigade Headquarters commanding tactical operations of two to five combat battalions. A brigade has anywhere from 1,500 to 3,200 Soldiers and in the case of Armored Cavalry, Special Forces and Rangers, instead of Brigade, they may be called a Regiment or a Group. Brigades are normally commanded by a Colonel but sometimes Brigadier Generals take the helm.

Brigades are made up of 2,000-5,000 soldiers, normally split among three to five battalions. The armed cavalry and ranger forces of this size are called regiments or groups, not brigades. Commanders of brigades or regiments are one-star brigadier generals or colonels. ~ Thirteen.org

A Division is normally commanded by a Major General and has 10,000 to 16,000 Soldiers; at least three Brigade sized elements. Divisions are numbered and conduct major tactical operations for their Corps.

Since 1917 the division has been the building block of the US Army. Over the years, it has changed in structure and has fluctuated between 10,000 and 28,000 soldiers. The division has survived over the years because of its success in adapting to changing circumstances, and by being the crucial organizational and command interface between smaller combat units and higher levels of command. The 1st Infantry Division has led the way in the success of the division as an essential unit of the US Army. Starting in 1939, the Army fielded types of divisions: infantry, armor, cavalry and airborne. The 1st Division—today’s 1st Infantry Division—is the Army’s first and oldest division, having been on continuous active duty since June 8, 1917. ~ FD Museum.org 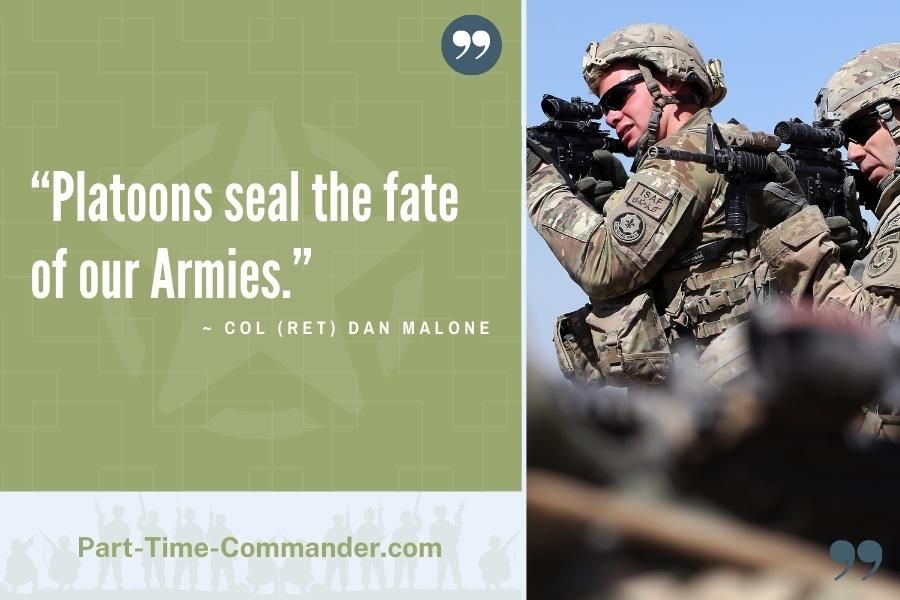 Corps are made up of two to five divisions; 20,000 to 45,000 Soldiers. Corps is the base of Multi-National operations and are commanded by a Lieutenant General.

As of 2014, the active field corps in the US Army are I Corps (“eye core”), III Corps and XVIII Airborne Corps; their lineages derive from three of the corps formed during World War I (I and III Corps) and World War II (XVIII Airborne Corps). On 12 February 2020, it was announced that the Army was reactivating V Corps to bolster the presence of US forces in Europe. ~ Wikipedia

The Field Army is two+ Corps and is loaded with 50,000+ Soldiers. They are commanded by a Lieutenant General or higher.

A field army (or numbered army or simply army) is a military formation in many armed forces, composed of two or more corps and may be subordinate to an army group. Likewise, air armies are equivalent formation within some air forces, and within a navy the comparable notion is that of a fleet. A field army is composed of 100,000 to 300,000 troops. ~ Wikipedia

This type of unit hasn’t been used since World War II but could be at any point in time. It is led by a 4-Star General. It consists of two or more Field Armies. It plans and directs campaigns.

An army group is a military organization consisting of several field armies, which is self-sufficient for indefinite periods. It is usually responsible for a particular geographic area. An army group is the largest field organization handled by a single commander—usually a full general or field marshal—and it generally includes between 400,000 and 1,000,000 soldiers. ~ Definitions.net

In conclusion, these are the basic facts and figures for United States Army Unit Sizes. Do keep in mind that at any given time, the numbers can change. For example, maybe you will hear of 8,000 or 18,000 Soldiers in a Division. This could happen because an Armored Division or Mechanized Infantry Division is much bigger than a Light Infantry Division.

What are your thoughts about the different Army Unit Sizes? I believe I covered these definitions properly but if you see any mistakes, please correct me by leaving a comment below. Thank you for visiting and feel free to share this information with your peers.