In today’s post, I want to share my top 33 Army quotes of all time. I will share the quote, the author, and then provide my thoughts on it. These quotes are from current or former Army personnel. I found them online via YouTube, books, and other sources.

Top 33 Army Quotes of All Time 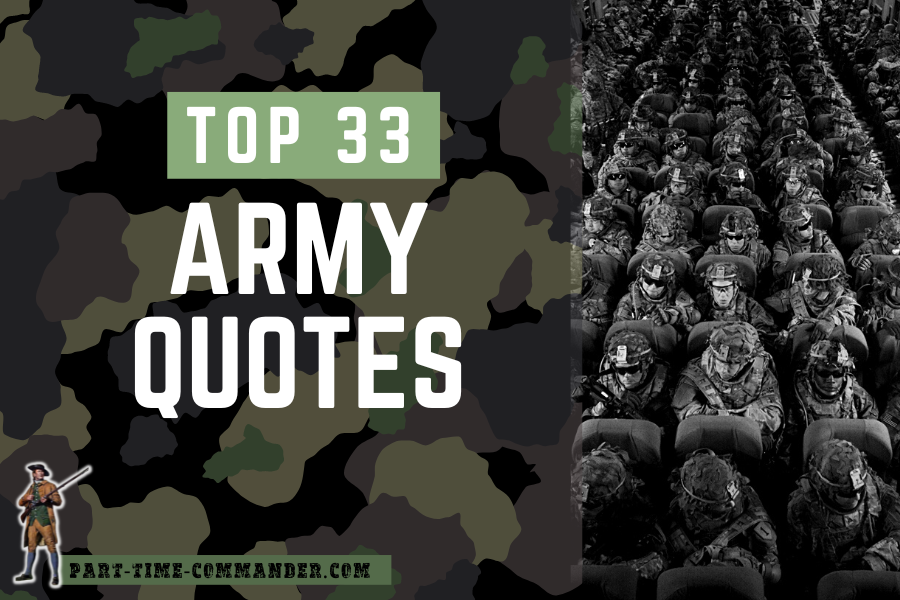 # 1: The soldier is the Army. No army is better than its soldiers. The Soldier is also a citizen. In fact, the highest obligation and privilege of citizenship is that of bearing arms for one’s country. ~ General George Patton Jr.

An Army is only as good as its Soldiers. As a Citizen, the most noble thing you can do is serve your country (in the military), especially in times of war.

Face it, even if you think you have the U.S. Army wrapped up, you will still have a huge fight on your hands.

# 3: Discipline is the soul of an Army. It makes small numbers formidable; procures success to all of the weak, and esteem to all. ~ George Washington

Without discipline the military will not succeed. If the leaders and Soldiers have self-discipline, they will fight as a team and do whatever it takes to succeed.

While it’s patriotic and noble to give your life protecting your country, it’s much better to kill the enemy and make them die for their country.

# 5: The supreme quality for leadership is unquestionably integrity. Without it, no real success is possible, no matter whether it is on a section gang, a football field, in an army, or in an office. ~ Dwight Eisenhower

Be a person of your word. Do what you say and say what you do. What you do when no one is watching you is what matters most. 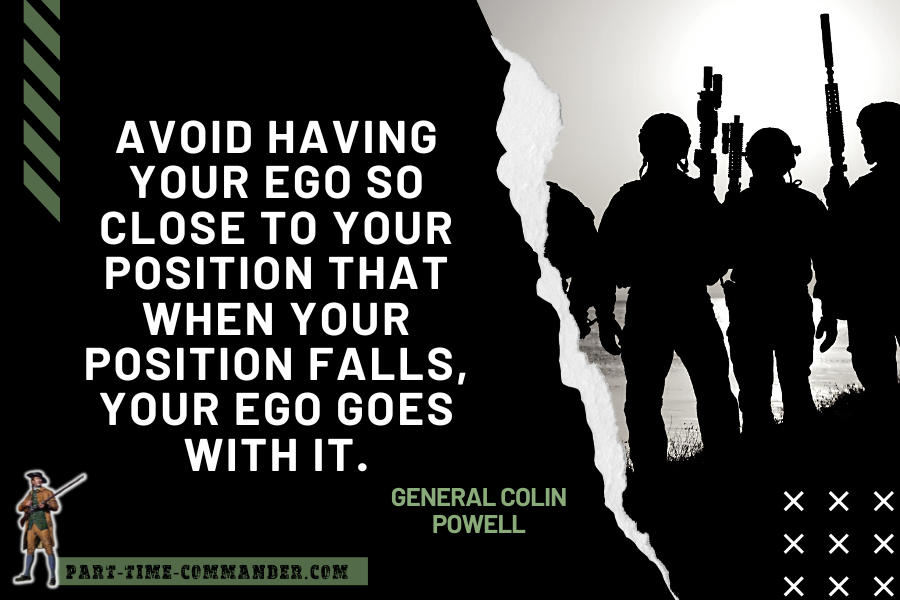 # 6: I can’t expect loyalty from the army if I do not give it. ~ General George Marshall

Loyalty is a two way street. It should flow up and down, from leaders to Soldiers and Soldiers to leaders.

# 7: The army teaches boys to think like men. ~ Elvis Presley

Serving in the military helps you grow up faster than normal, because of the responsibility and experiences you have.

# 9: In the army, we do two things every day. We train our soldiers, and then we grow them into leaders, because frankly, we don’t hire out. We grow our own leaders. ~ General Eric Shinseki

In the military, leaders are developed. One of our primary responsibilities as a leader is to develop our subordinates for positions of increased responsibility.

# 10: A person like myself, born and raised in the inner city of Atlanta, Georgia, to lower-middle-class parents. But I had the opportunity to get an education, to go and earn a commission in the United States Army, to serve for 22 years, to lead men and women in combat. ~ Allen West

In the military, the opportunities are endless. Anyone can move up through the ranks if they choose to. It is a level playing field.

# 11: It’s fatal to enter a war without the will and desire to win it. ~ General Douglas MacArthur

It just behooves me as to why any country or Army would enter a battle or war on the pretense of “just being there,” but it has happened, and it has been disastrous for them.

# 12: To be prepared for war is one of the most effective ways to preserve peace. ~ General George Washington

By having a large, skilled, trained military, it keeps us prepared for war. We can sleep well at night knowing we have a strong military presence to defend us.

# 13: War is cruel. There is no need to try and reform it. The more cruel it is, the sooner it will be over. ~ General William Sherman

# 14: In war, there are no prizes for the second place finishers. ~ General Omar Bradley

In war, there is only one winner. You don’t get a participation trophy. You either win or your lose.

# 15: I tremble for my country when I hear the confidence that it expresses in me. I know all too well my weaknesses, and that our only hope is in God. ~ General Robert E. Lee

Whether it was a prophetic saying, or just words from a very wise man, General Lee put God first, knowing He is the way.

I just love how General Patton said it how it is. It is killing the enemy that wins the war, not being killed.

# 17: A good battle plan acted on today is better than a perfect plan acted out tomorrow. ~ General George Patton

Develop a plan, realize it will never be perfect, and take action. Do not get stuck trying to make everything perfect. Nothing is perfect.

# 18: Bravery is being the only one who knows you are scared. ~ Colonel David Hackworth

It’s okay to be scared. However, if you’re a leader, you must still appear confident, even if you are scared. 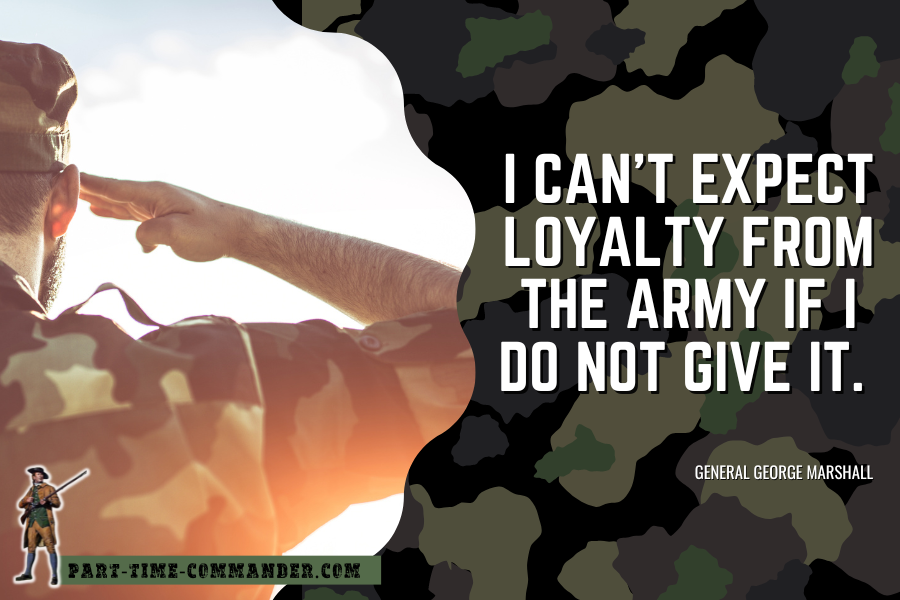 # 20: Leadership is the art of getting someone else to do something you need done because he/she wants to do it. ~ General Dwight Eisenhower

Your Soldiers will follow your orders because they have to, but if you can get them to “want to do it” they will go above and beyond.

# 21: Lead me, follow me or get the hell out of the way. ~ General George Patton

# 22: The day the soldiers stop bringing you their problems is the day you stopped leading them. They have either lost confidence that you can help them or concluded that you do not care. Either case is a failure of leadership. ~ General Colin Powell

As leaders, we are ultimately in the “people” business. We get paid to solve problems.

# 23: Discipline is the soul of an army. It makes small numbers formidable; procures success to the weak, and esteem to all. ~ General George Washington

Without discipline, the Army will crumble. This is one of the biggest issues in today’s Army. Discipline should flow from the top down! Leaders must set a good example and enforce the standards.

# 24: If everybody is thinking alike, then somebody isn’t thinking. ~ General George Patton

Leaders get paid to think and make decisions. Sometimes it’s wise to go against the grain and think outside the box.

# 25: When war does come, my advice is to draw the sword and throw away the scabbard. ~ General Thomas “Stonewall” Jackson

Once you make the decision to fight, FIGHT. Get rid of your exit strategies. Don’t give yourself an easy way out. Either do it. Or don’t do it!

The position doesn’t make the man. Instead, it reveals the man. Don’t think you are better than the people you lead. If you want to see someone’s true colors, give them a position of power.

Don’t worry about having a perfect plan. Instead, come up with a good plan now, and give your subordinates enough time to do their planning. An 80% solution today is better than a 100% solution next week!

# 28: Bravery is being the only one who knows you are afraid. ~ David Hackworth

It’s okay to be scared. Just don’t let anyone else know you are scared. As a leader, you set the tone for your organization. In combat, your troops will rely on you to be confident and poised. If you are confident, they will be confident.

Don’t procrastinate and wait to the last minute. Something always comes up, so plan accordingly. Murphy is ALWAYS working against you.

If the wheel isn’t broken, why fix it?

# 31: Leadership is the art of getting someone else to do something you want done because he wants to do it. ~ General Dwight Eisenhower

Anyone can give orders. But it takes an effective leader to empower others and get them to want to do what they are doing.

# 32: No combat ready unit has ever passed inspection. ~ Joe Gay

Any unit can look good on paper. But the only way to really test a unit is in combat. Don’t get so caught up in the paperwork and minutia that you forget your true mission: to train for war. 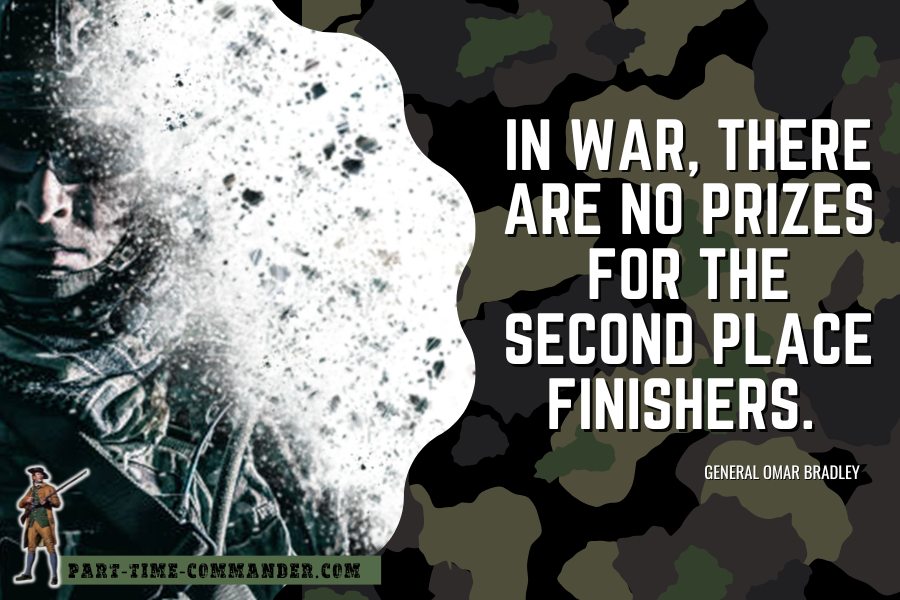 # 33: The more you sweat in peace the less you bleed in war. ~ Anonymous

Train, train, and train some more. Perfect practice makes perfect. If your unit is proficient at a task, do it again. Soldiers must be able to do their individual and collective tasks without thinking about it. The only way to become that proficient is to practice, practice, practice.

If you are a Soldier, THANK YOU for your service. I hope you enjoyed these top Army quotes.

Which one is you favorite and why? Leave a comment below to let me know what you think. I look forward to hearing from you.