While getting promoted is normally the top priority for most service members, recognition in the form of awards… medals and ribbons is vitally important.

The pride when a child, grandchild or other friend or family member admires your shadow box full of military awards.

What is this ribbon Grandpa? That, my child, is the Army Overseas Service Ribbon. I was awarded it for serving outside the United States. 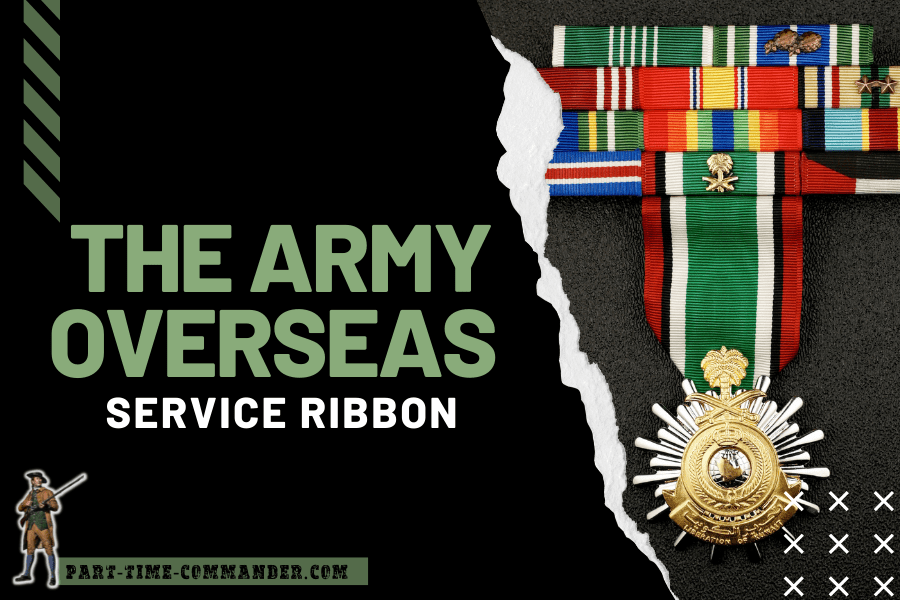 In the paragraphs below, I am going to give you the top 10 cool facts about the Army Overseas Service Ribbon. I will cover the history, the requirements, and other good to know information.

The Army Overseas Service Ribbon (OSR) was established by the Secretary of the Army on April 10, 1981, and is awarded to active Army, Army National Guard and Army Reserve in an active reserve status after the completion of a successful overseas tour–if not recognized by another award or campaign medal.  ~ Medals of America

#2: Who Can Receive The Army Overseas Service Ribbon?

Originally, the Army Overseas Service Ribbon would not be awarded to service members if they received a campaign or service medal on the same tour. The Army eliminated that policy and as such, you can be awarded this ribbon even if you have other awards from the same campaign.

If a service member has more than 1 tour, he/she will not be awarded another ribbon. Instead, a numeral is pinned to the existing ribbon. If you had 4 tours, a number 4 would be pinned to your Army Overseas Service Ribbon.

For those service members who completed tours before the 1981 issuance of this ribbon, they needed to have an active Army status after August of 1981 to be eligible.

According to regulations, Soldiers who serve at least 11 cumulative months over a 24 month period or 9 continuous months on TCS/TDY status can receive overseas tour credit.

If a Soldier is on a prescribed OCONUS tour and is deployed on a separate OCONUS TDY/TCS status tour, that Soldier will receive credit for two overseas tours.

Soldiers who have overseas service with another branch of service (AF, Navy, Marines) must be credited with normal overseas tour completion by that service to qualify for award of the OSR. ~ Official Military Ribbons

Soldier’s who die and it is officially listed as “in the line of duty,” they are eligible to receive the Army Overseas Service Ribbon. This is a way for friends and family to remember the member’s dedication to the U.S. and freedom.

There has been a lot of confusion from Army personnel about eligibility for anyone deployed to Hawaii. The fact is, Hawaii is now a State and therefore is ineligible as an overseas tour. But for service members who served in Hawaii before it was a State, they ARE eligible.

The biggest confusion comes for Army personnel who served during the declared Statehood. Would you give the ribbon to them? I would. Hawaii became a State in August 1959.

If you served in Desert Storm or Desert Shield, in most cases, you will qualify or this award.

RC Soldiers who were mobilized and dispatched overseas to locations outside the theater of operations during Operations DESERT SHIELD and DESERT STORM (2 August 1990 to 11 April 1991) are eligible for award of the OSR without regard to the time served overseas as long as the overseas service is not recognized with another U.S. service medal.  ~ Military Wives

I’m proud of my overseas service ribbon. I deployed for 16+ months to Kosovo back in 2006 and 2007. Being away from my fiancee (now wife) was difficult and stressful. This was one of several service awards I received for my deployment. While it’s not fancy, and doesn’t come with a medal, it looks great sitting next to the other ribbons on my uniform. I also earned one during my deployment to OIF 1 in 2003.

Now, I have heard some opinions that there should be no such thing as an overseas service award. I disagree.

These men and women are leaving their families behind to spend a year or more in a different country with different cultures and often imminent danger. I see nothing wrong with awarding a ribbon thanking them for their overseas military service. What are your thoughts?

Also, I would love to hear from all who have been awarded the Army Overseas Service Ribbon. Give a shout out… Where, when, and how many? You can post all comments and questions below. Thanks for stopping in.