Before I dive too deep into the subject, I’d like to clarify the major difference between officers and NCOs. NCOs are the backbone of the Army. They manage the day-to-day operations, supervise soldiers, and make things happen. Without NCOs nothing would happen in the military. Respect!

Officers are the planners. They PLAN missions and focus on the big picture, the STRATEGY. The NCOs lead the soldiers and turn these plans into reality.

The officer plans the work of the organization, assigns tasks to subordinates, and sees that the work is accomplished to the highest standard. In that regard, an Army officer is similar to a manager in a corporation. But that is where any comparison to the corporate world ends. Officers lead by example. An officer must be willing to personally undertake any task that is assigned to a soldier. ~ LSU Army ROTC 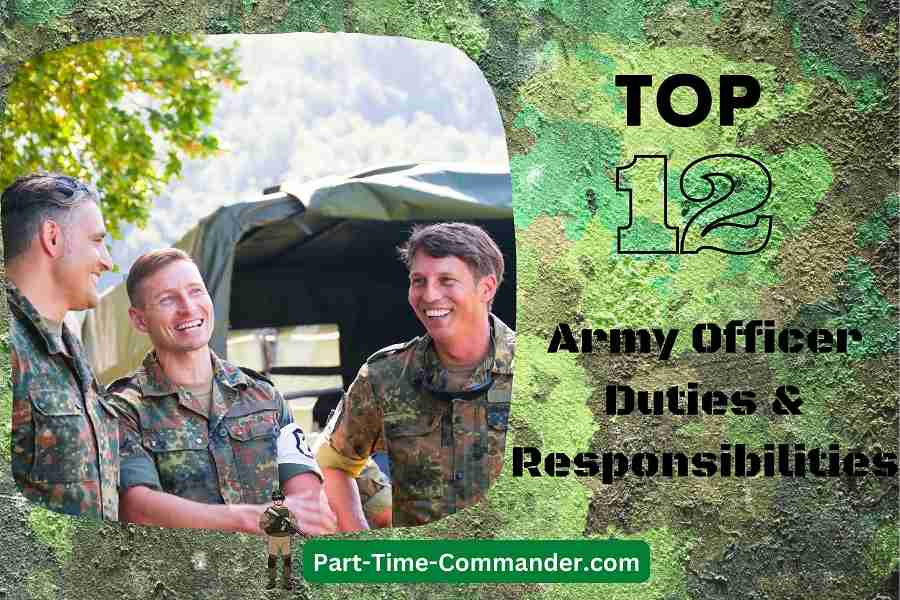 Here are the most common Army officer duties and responsibilities.

Officers are the Army’s planners. They conduct the Troop Leading Procedures and Military Decision-Making Process and write Operations Orders for soldiers. Officers normally focus on 30, 60, and 90-days out, while the NCOs manage the day-to-day operations.

Think of an officer like a Captain of a ship. They determine where the ship must go, but they aren’t the ones rowing the boat! Make sense?

This is where you figure out the best way to achieve your objective. Plan how you are going to get where you want to go. Plan for contingencies, because almost no plan goes perfectly according to plan. Think conventionally, then thing unconventionally. ~ Victory Strategies

All units have mission essential tasks. Officers ensure their soldiers are trained AND their unit is trained and proficient.

In the U.S. Army, the term collective training refers to events in which groups or units of soldiers learn, practice, and demonstrate proficiency in group activities key to their missions. The report examines the fidelity of virtual systems to train U.S. Army platoon- and company-level collective skills and estimates the costs of using simulators with different degrees of fidelity for collective training. ~ RAND

Officers develop their subordinate officers and NCOs. This is done through counseling, job shadowing, private mentoring, professional development programs such as OPD or NCODP, and on the job training. Their job is to develop tomorrow’s leaders. They ensure their subordinate leaders get the schools and training they need to advance to the next rank and beyond.

Be reasonable and be adaptive, standards can change but it must be done through the proper means. Always look for ways to improve the way our Soldiers fight, including their equipment and doctrine. ~ NATO

Officers enforce the Army Standards. In most cases, the NCOs manage the common Soldier issues, but the officers ensure their NCOs are doing their job and they take care of issues that are brought to their level. In some cases, depending on the officer’s duty position and rank, they might issue Article 15’s, reprimands, bad evaluation reports, or discharge bad soldiers.

Discipline or “military discipline” as it is often referred, is defined as the state of order and obedience among personnel in a military organization and is characterized by the men’s prompt and willing responsiveness to orders and understanding compliance to regulation. ~ Army University Press

Officers are tacticians. The quickest way to know if you have a good officer is in combat. In garrison, the NCOs run the show, but in combat officers run the show. Officers lead tactical missions in combat. They are the senior tacticians in their unit.

Tactics is the art and science of employing all available means to win battles and engagements. Specifically, it comprises the actions taken by a commander to arrange units and activities in relation to each other and the enemy. Filled with diagrams of attack plans, defensive strategies, and troop movements, U.S. Army Tactics Field Manual is the playbook the U.S. Army uses to employ available means to win in combat. ~ Rowman & Littlefield 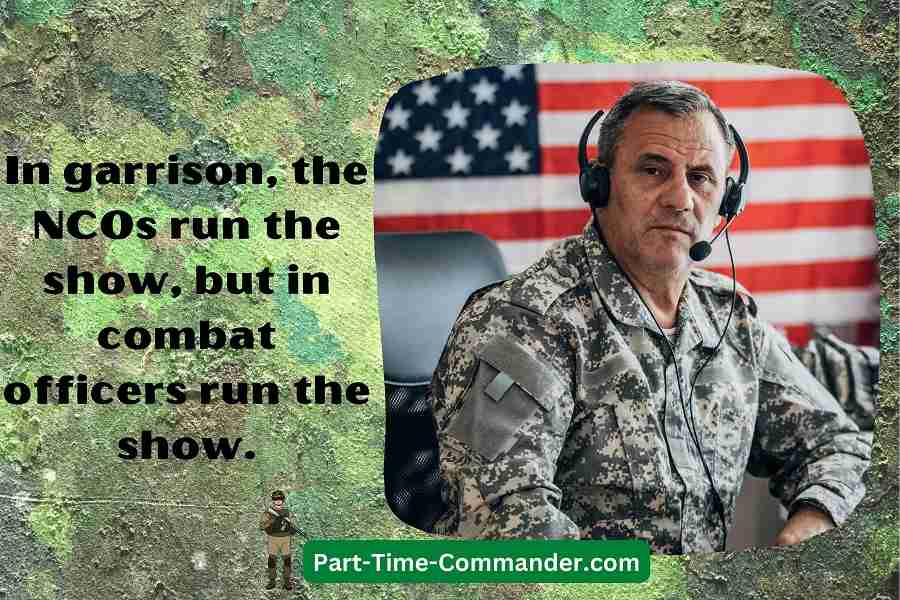 Officers are the primary hand receipt holder. They have the responsibility to ensure their unit is safeguarding and maintaining its equipment. This includes turning in excess equipment, replacing damaged equipment, ensuring inventories are done on time and to standard, and more.

The Army’s leadership is committed to ensuring our Soldiers have the right equipment in the right quantities to fight and win. Accurate and precise accountability of our equipment, supplies and material is paramount to ensuring success. ~ U.S. Army

At the end of the day, Army officers are held responsible to ensure the mission gets done, done right, and done on time. This includes their personal job and the job of everyone working for them. Everything in the Army is about mission accomplishment.

As the leaders of our organizations, every minute of our time spent mentoring and attempting to improve an individual’s behavior on our team is one less minute we can invest in another team member or other mission essential task. Like all investors, we invest most of our time (and money) into those investments we believe will give us the greatest return on our investment. ~ Training Mag

Most Army officers are supervisors, leading anywhere from a few soldiers to a few thousand Soldiers. Most officers personally supervise two to ten people and oversee many others.

The five key supervisory roles include Educator, Sponsor, Coach, Counselor, and Director. Each is described below. Note that in your role as a supervisor, you will be using these five roles, in some combination, simultaneously, depending on the needs of the team members. ~ Virginia.edu

Officers manage unit readiness. This includes equipment and personnel readiness. Officers ensure their unit is trained. They make sure their people and equipment are prepared to deploy anywhere in the world at moment’s notice.

Army officers are leaders and mangers. They command units and lead staffs. They set the tone for their organization or section. They supervise, delegate, and empower others.

Officers are responsible for soldier morale. They track the health, welfare, and morale of their unit to make sure their subordinates have proper food, clothing, and shelter. They deal with problems as they arise. They monitor the morale in their units by talking with soldiers, conducting spot checks, and seeking input from subordinate leaders. They write and approve awards and establish recognition programs for good performing soldiers.

Morale, also known as esprit de corps (French pronunciation: ​[ɛspʀi də kɔʀ]), is the capacity of a group’s members to maintain belief in an institution or goal, particularly in the face of opposition or hardship. Morale is often referenced by authority figures as a generic value judgment of the willpower, obedience, and self-discipline of a group tasked with performing duties assigned by a superior. ~ Wikipedia

In conclusion, while the NCOs are the backbone of the Army, officers also have a critical role. They are the planners and leaders who determine what must be done and where to go. When officers and NCOs work well together, and each do their job properly, it is a beautiful thing to see! Serving as an Army officer is a privilege and honor.

What are your thoughts? Are you a current or former Army officer? If so, what did I leave off this list but should have included? Let me know so I can update it. Leave a comment below to share your thoughts. I look forward to hearing from you.