Earning the Army Combat Medical Badge comes with both pride and heartbreak. Any Soldier who wears this award had to attain it through the ravages of war. The men and women who wear this award have witnessed things that would force many of us to vomit, and may even make some people pass out. In today’s post, I am going to provide you with 8 cool facts about the Army Combat Medical Badge that you may not had known.

1: Created in 1945. The Army Combat Medical Badge was created early in 1945. the award was given retroactive status back to 1941 at the start of World War II. The design of this award consists of an oak wreath on the outer edge with a stretcher across it. In the center is a Caduceus which is a staff with Eagle’s wings at the top and 2 snakes wrapped around it. At the very top is the Greek cross.

2: Coincides with the Combat Infantry Badge. The War Department had designated the Combat Infantry Badge for those who faced the enemy as infantry Soldiers. The Combat Medical Badge was meant to be the equivalent for medics who were right there with those infantry Soldiers. As a medic, if you were within the combat zone, it was almost embarrassing if you did not have a CMB. Some Soldiers would even not want you touching them if you were not wearing one.

4: United States Navy and Air Force Medics can also be awarded the Combat Medical Badge. Even though the CMB is an Army award, you just may see someone in the Navy or Air Force wearing this prestigious award. If they were attached to an Army unit that was engaged by the enemy, and they met all the requirements of U.S. Army Medical personnel, they could be awarded the Combat Medical Badge.

6: Only 2 medics have ever been awarded the Combat Medical Badge for 3 wars or conflicts. A medic can only earn one of these during any certain conflict or war. If a medic wins multiple CMBs they are given them with stars representing the other awards. Only 2 medics have been awarded the Combat Medical Badge with 2 stars. These were from serving in World War II, Korea, and Vietnam. The names of these 2 Soldiers are Henry Jenkins and Wayne Slagel.

7: Vietnam was the most difficult conflict for medics to receive the Combat Medical Badge. Whether it was because too many individuals were getting the award without actually performing the duties, or because of other reasons, commanders who were recommending the Combat Medical Badge during Vietnam had to document the coordinates of the location, the type of engagement with the enemy, the time of engagement and even the intensity of the firefight the medic faced. Fewer Combat Medic Badges were given out during Vietnam because of these stringent policies.

8: The War on Terror changed the eligibility requirements for the Combat Medical Badge. War is no longer Soldiers facing each other with rifles and hand grenades. With the newer devices such as Improvised Explosive Devices(IEDs) and other forms of enemy attack, even medics that are working in a hospital behind friendly lines are still in danger’s path. It is now a commander’s prerogative on whether he/she should recommend any medics to be awarded the Combat Medical Badge. It is because of this that you may find some discrepancies on certain medic Soldiers receiving the award while others who were in the same location didn’t. 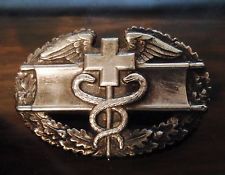 As I stated in the first paragraph, this award can be worn with pride, but many medics who do wear it also feel an overwhelming sense of heartbreak. They viewed death and dismemberment that they will probably never be able to erase from their minds.

There was a story about a young medic Soldier who was getting deployed. He seemed happy and when he voiced that he would now be able to achieve his Combat Medical Badge, an older medic pulled him out in front of all the other Soldiers and said, “Yep, you will now be able to get your CMB.” Pointing at the other Soldiers the elder medic said, “Now do you want to choose who gets the Purple Heart so you can get the CMB?” Everyone became very quiet.

Do you have a Combat Medical Badge? If so, we would like to hear your story if you are willing. We understand it may be difficult, but please tell us about attaining this badge if you will.

If you see a Soldier/medic wearing this badge, you know they risked their life to save others. Give them a big thank you, they deserve it.