The Army Chain of Command is a line of authority and responsibility, in which orders are transmitted from one unit to another and one Soldier to another.

Failing to follow the proper Army chain of command can lead to confusion, frustration, inefficiency, relief for cause, or other disciplinary actions.

Furthermore, the chain of command is not just about rank. Just because someone has a higher rank than you does not entitle them to order around people they outrank.

For instance, an officer in one unit does not directly command lower ranking members of another unit. In addition, when an officer has a problem with a Soldier or NCO in another unit, they should contact the commander of that unit to remedy the situation rather than deal with the Soldier directly.

Simply put, the chain of command means that Soldiers take orders from only one superior and only give orders to a defined group of people immediately below them.

In addition, within combat units line officers are in the chain of command, but officers in specialist fields (such as medical, dental, legal, supply and chaplain) are not, except within their own specialty. For example, a signal officer in an infantry battalion would be responsible for the signal personnel in that unit, but would not be eligible to command the battalion or any of its subordinate units (in most cases). 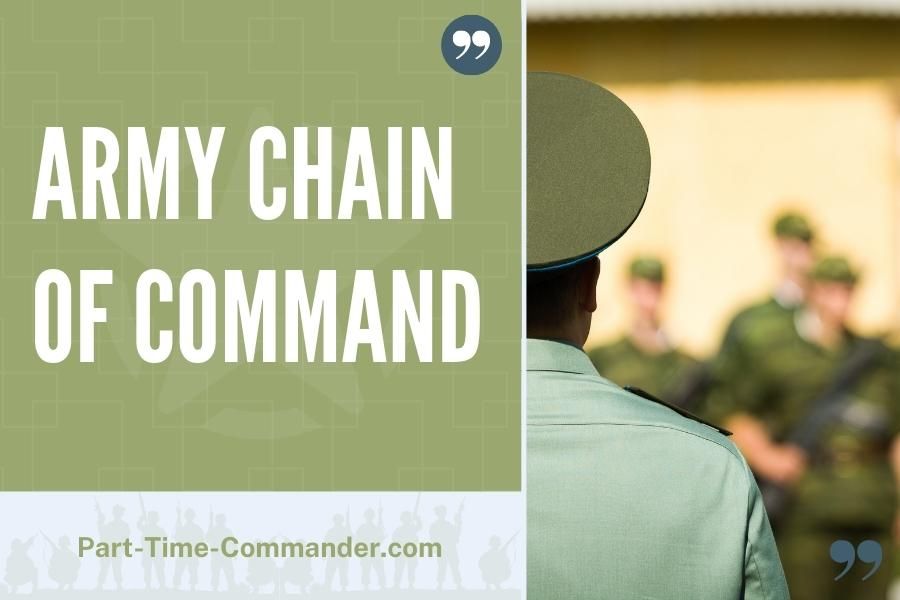 Here is the typical chain of command in the Active Duty Army.

The elements in the organizational chart for the U.S. Army span from the individual soldier all the way to the largest building block commonly used, the Corps. In between are the intermediate elements of Army organization, including the squad, platoon, company, battalion, brigade and division. ~ The Balance Careers

The National Guard Chain of Command

Within the National Guard, the chain of command in each State starts with the Governor. During peace-time, the Governor has control over their troops. They can “activate” or “mobilize” their troops for state emergencies such as floods, tornadoes, hurricanes, and other natural disasters.

Next, the Assistant Adjutant General – Army (TAAG) is the next officer in the chain of command. They are responsible for all Army troops within the state. TAAG is normally a Brigadier General or Colonel (P), who provides guidance to Army Brigade Commanders.

Underneath TAAG are the Brigade Commanders. Also known as the Major Subordinate Commands, MSCs are Brigade sized units. Depending on the type of unit, it can be commanded either by a Brigadier General or Colonel. Most states have somewhere between three to ten MSCs. 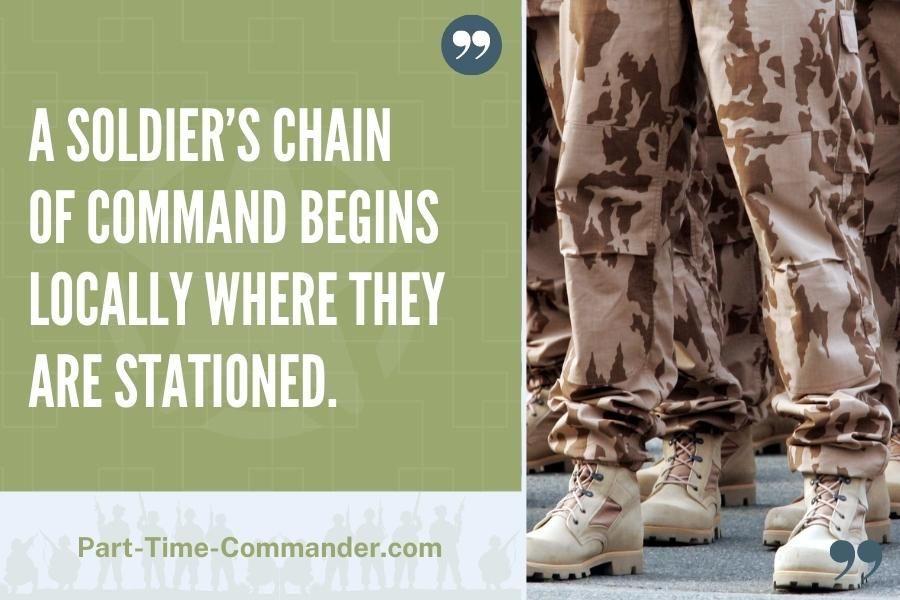 Although the NCOs do not have command authority, they play a vital role in remedying Soldier issues and helping maintain disciplined, trained units. NCOs are the backbone of the Army.

Within a platoon-size element, the NCO Support Channel consists of a Platoon Sergeant, Squad Leader, and Team Leader. The NCOs handle most Soldier issues and recommend UCMJ actions up the chain of command, first to the Platoon Leader and then the Company Commander.

Example Chain of Command in an Infantry Battalion

Let me give you a quick hypothetical example of how the chain of command in an Infantry Battalion should work. Let’s pretend Private Jones has a problem and needs assistance. This is how the process of solving the issue should work.

Above the battalion level, you have brigade and division. 99.99% of all Soldier issues never make it this far up the chain of command because the subordinate chains of command are doing their job. In most cases, Soldier issues are handled at the Team Leader and Squad Leader level. Sometimes issues are escalated to the Platoon Sergeant level. Very seldom are they escalated to the First Sergeant or Company Commander level or higher, unless it is something serious.

The information you see below is primarily for USAR and ARNG personnel.

As military leaders, we will sometimes deal with Soldier issues or work related problems that must be sent up the chain of command to get resolved. Whenever possible, we should try to handle everything at the lowest level possible. That’s the job of each leader in the Army, from the lowest ranking Corporal to the Commanding General.

But some issues are a little more complex than that. Sometimes (as leaders) we don’t know how to fix an issue, or we don’t know whether or not our boss needs to know about an issue. And sometimes the issue is so critical; we know we need to notify our boss about it immediately. Whenever either of these things happen you should send the issue up the chain of command to keep everyone informed.

Most commanders (CPT and above) have some type of CCIR (Commander’s Critical Information Requirements). These are “critical issues” they want to know about whenever the issue takes place. Some examples might include:

Each commander’s list will vary a bit based upon their personality, goals, leadership style and other factors.

In the paragraphs below, I want to share some tips about how to send issues up the chain of command. These are things I did while I was in command.

If you lead other leaders, you must tell your subordinate leaders that you trust their judgment and you support their decisions. They might not always make the same decision you do. Heck, they might not always make the right decision either. But you must empower them as leaders. You must give them the authority to do their job, and you need to be supportive (unless they do something unethical, illegal, or immoral). If you have someone working for you who makes decisions on their own, consider yourself lucky!

The last thing I would ever want is a subordinate leader who is always asking my permission or trying to get my approval to do something. Leaders get paid to make decisions and solve problems! Teach your people to make decisions so they can be independent of you, not dependent on you. And make sure you support them. If you always go against their decisions, they will stop making decisions.

# 2: As a Senior Leader, Tell Your Subordinates What Your Critical Issues Are

When you first start your new duty position, sit down with your direct reports (leaders) and tell them your expectations in writing. Tell them EXACTLY what issues must be reported up the chain of command and how/when they should be reported. Put this in writing, brief everyone, and give them a copy of your policy. If you need to change or modify your policy at some point in the future, that’s fine. 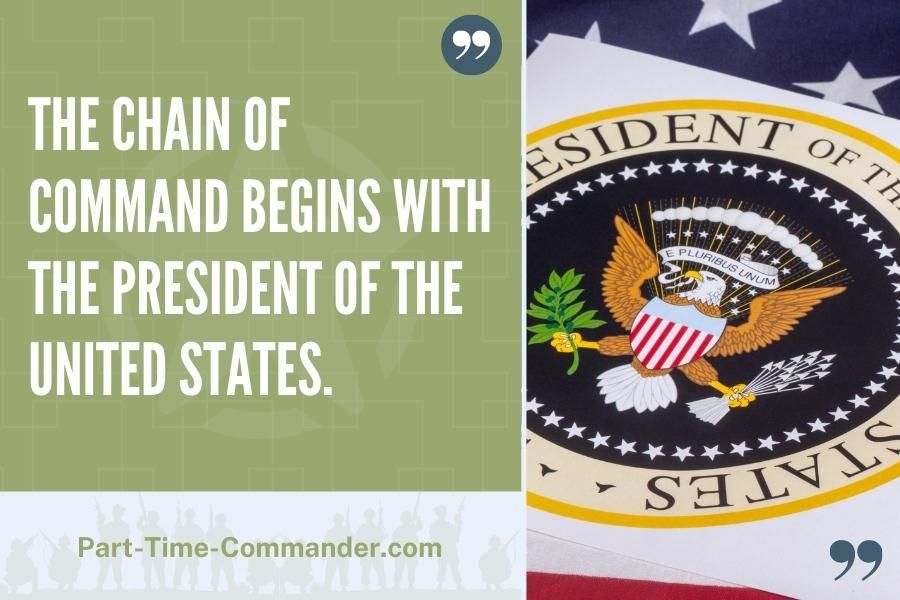 That is what you get paid to do. If you’ve been given advice on what must be sent up the chain of command, then by all means follow it. If you don’t know what to do, try to handle the issue yourself.

I’ve found it’s better to make the wrong decision and ask for forgiveness than to go to your boss and get permission every time you must make a decision.

# 4: Have a Formal Reporting Process

Try to develop a standardized or formal reporting process, which is nothing more than a series of steps people must follow to report/address an issue. Here’s an example:

This is the simple process that I used while I was a Company Commander.

In summary, the Army chain of command is extremely important in the military. It is vital for giving orders, getting things done, and surviving in combat.

When it works well, it’s a beautiful thing. When it doesn’t work right, leadership is ineffective, Soldiers become jaded, and morale plummets.

What are your thoughts? What do you think about the Army chain of command? Leave a comment below to let me know what you think. I look forward to hearing from you. Hooah!

And here are a few books on Amazon you might enjoy about this subject:

4 thoughts on “Army Chain of Command: How it Works from the Top Down”