In today’s post, I’m going to educate you about Army C Rations.

Try bringing up the word C Rations if you are in the company of any United States Army veterans and you will probably see looks of disgust. While veterans essentially hated C Rations, they did sustain them while they were in combat operations.

Now the Army gives soldiers what is known as an MRE or Meal, Ready to Eat. It is my understanding that MREs are much more palatable then the older C Rations. They are also much lighter in weight because of the type of packaging. 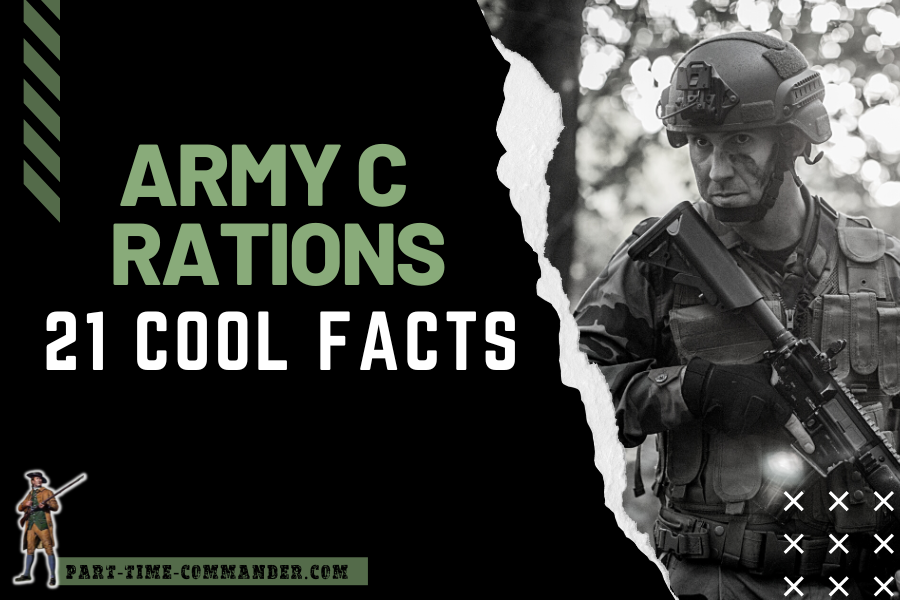 During World War I, United States Army soldiers were provided with what was known as Iron Rations and then changed to Reserve Rations which were completely insufficient for a soldier’s needs to sustain them for a longer period of time. A Rations was fresh food supplied to the Army, while B Rations was unprepared packaged food used in field kitchens and mess halls.

But what about the soldiers who were spending hours and days in situations where they did not have access to a field kitchen?

In 1938, the Quartermaster Subsistence Research and Development Laboratory in Chicago, Illinois began developing a ration that would be more nutritional and would keep for longer periods of time. They developed what would be known as the C Ration. Many called it the Combat Ration.

They also received many requests for C Ration varieties. I will tell you more on those further down in this post.

In 1940 during, these new Army C Rations were tested during the Louisiana Maneuvers. Troops from multiple States converged in Louisiana to prepare for war. They were separated into a Red and Blue armies and enacted possible war situations.

During this time the soldiers ate Army C Rations to sustain their bodies. Not only were these soldiers preparing for World War II in training, they were also getting adapted to what they would be ingesting. They were given one pound of meat in the C Rations.

# 3: Changes And Ingredients In The Original C Rations

After the Louisiana Maneuvers, they dropped the meat portion to 12 ounces in the M – Unit, and soldiers were also issued a B – Unit which was a can containing bread and dessert.

Each soldier would be issued 3 M -Units and 3 B – Units daily. They would also be issued an accessory pack.

Each soldier had a 1 in 3 chance of predicting what flavor of C Ration they would receive.

The original Army C Rations came in only three variations, which were:

Keep in mind these would only be eaten while in combat operations. There would be field kitchens where the food would be easier to eat too.

C Rations were given paper labels which would often come off leaving soldiers playing a guessing game as to what they were actually getting. It took the Army a long time before they started having the cans permanently stamped with the ingredients.

If you have an old C Ration can with a paper label intact, they are quite valuable.

The Army C Rations were issued in cylindrical cans. It was slightly over 4 inches tall and 3 inches round.

This made it quite difficult in packing and soldiers requested over and over that the cans be made flat similar to sardine cans, but they were denied because there was a shortage of machines capable of making the flat cans.

Soldiers learned to pack their ration cans in socks and such to cut down on the noise the cans may make.

I once heard a veteran describing the original three variations of C Rations and he used terms that always made me think I would go hungry before eating one.

He described the flavors as:

Most soldiers would say that the C Rations were quite bland and difficult to eat. Experts even stated that C Rations should not be eaten for more than three continuous days, but soldiers were still forced to eat them much more often.

Was the flavor really that terrible? If you have eaten them, tell us about it in the comment section at the end. 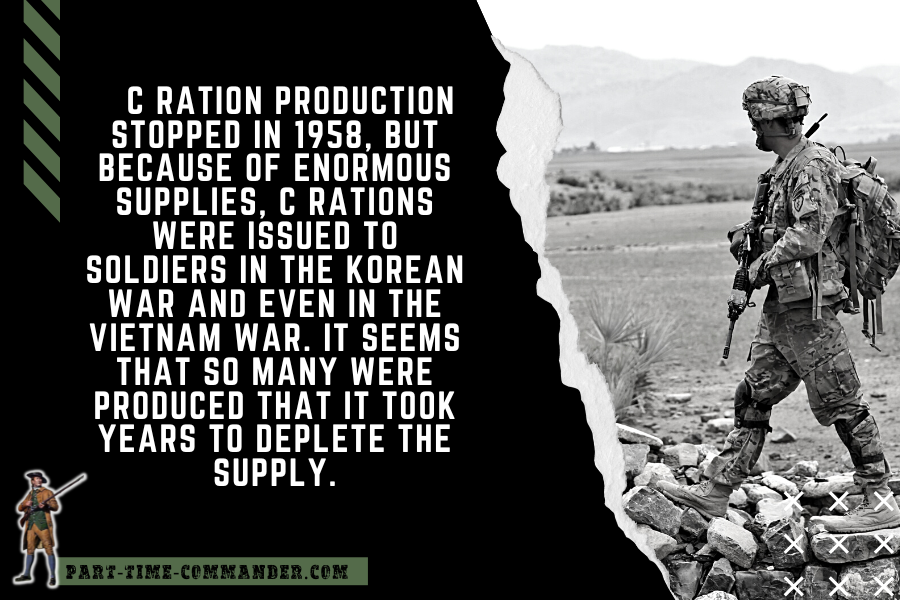 The Army heard the needs of new flavors. In 1943 and 1944, they added several other varieties of C Rations. While they may still have been bland, at least there was some new variety.

This helped soldiers at least have something different to expect at each meal. The most unpopular was the Ham and Lima beans. And soldiers greatly appreciated the addition of the Breakfast-like flavor of the chopped ham and eggs.

C Ration production stopped in 1958, but because of enormous supplies, C Rations were issued to soldiers in the Korean War and even in the Vietnam War.

It seems that so many were produced that it took years to deplete the supply.

The original B-Unit that came separate from the M-Unit consisted of:

In 1944, they added orange drink, grape drink and cocoa powder to the list of drinks. The energy tablets were replaced with hard candy and then chocolates.

When the original Army C Rations were started, everything was put in one can. It was determined to be too bulky, and an accessory pack was developed.

The items in the accessory pack were:

For a short time during World War II, Dr. Ancel Keys developed what was known as the K Ration for paratroopers.

Using what they thought was the best parts of the K Ration and the C Ration, they attempted to develop the E Ration.

The bread was so terrible, that the idea was quickly dropped.

From 1948 to 1951, the Army issued the C2 Ration. This had more nourishment than the original C Ration, and soldiers could eat it hot or cold. It came in five varieties.

At over five pounds the C3 had even higher nutritional value than the C2 and provided a larger B – Unit.

While many soldiers loved the better variety, they hated the extra weight it entailed.

The Army wanted to give their soldiers the best they possibly could. From 1954 to 1958, they issued the C4 Ration.

This, along with the meat, entre, and bread pack made for a quite heavy Ration portion.

Even though C Rations were replaced in 1958, the rations issued to soldiers were still called C Rations up until 1980, and even after for a short time.

I remember entering Basic Training at Fort Benning in the early 1980’s and being told by my Drill Sergeant that the meal of the day would be C Rations. I managed to “choke it down,” but I would have to be near starving to eat another one.

There were several ideas using the basic C Ration formula. The Army was adamant in finding the “perfect” combat meal for soldiers.

Here are some of them:

The 5 in 1 Ration was developed by the Quartermaster’s Corps Subsistence Laboratory. Instead of carrying individual Rations, one larger portion was made to feed 5 soldiers. The 5 in 1 was used with great success in operations in North Africa.

The Army recognized the success of the 5 in 1, and since Great Britain used a 14 in 1 that worked quite well, they decided to develop the 10 in 1.

While the 10 in 1 was somewhat successful, the end of World War II created a large surplus of these 10 person rations. The humanitarian group CARE were tasked with using these as Care Packages to help feed starving people in Europe.

This Ration was developed by request of those who were serving in high altitudes. Personally, I would say this was one of the best ideas ever, but because of cost, bulk, and the fact that these meals needed to be heated, they were discontinued. One Mountain Ration served four soldiers.

An example Mountain Ration consisted of: 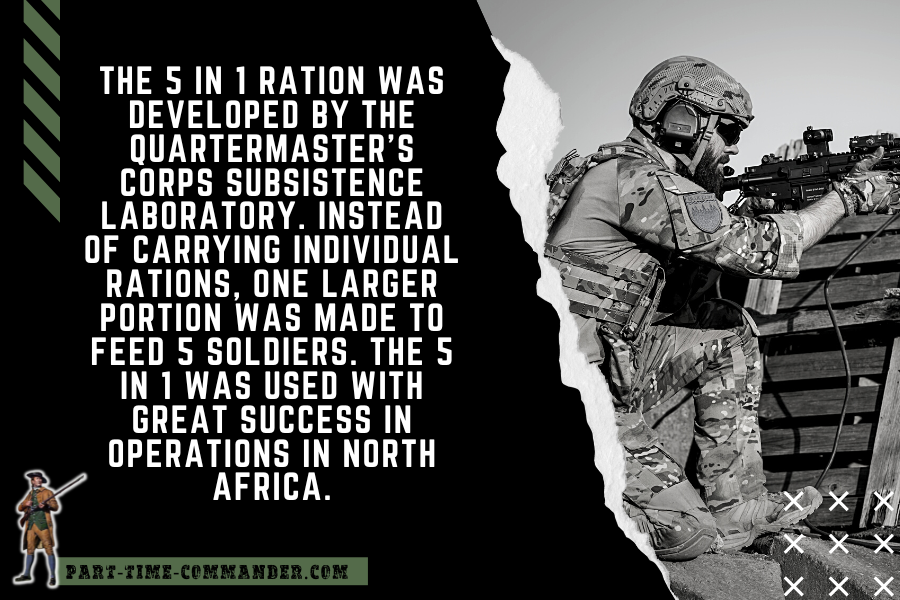 In a similar way to the Mountain Ration, many soldiers were in extreme jungle conditions. They needed lightweight rations that could be carried in high humidity circumstances.

Because of costs, the Quartermaster Corps began replacing many of the lightweight items of good nutrition with less expensive, but heavier and less nutritious items. This did create problems with soldiers serving in dense jungles.

An example of a jungle ration is:

Maybe by changing the name, soldiers will fall in love with it.

The facts say that C Rations were discontinued in 1958. The new meals issued to soldiers in the field would be he MCI which stands for Meal, Combat, Individual ration. But nothing really changed.

Yes, there were a couple of new items added, and the packaging slightly changed to reflect the new name but essentially, these were still C Rations with a different name. These, along with surplus C Rations were issued up until 1980.

Since 1981, The United States Army has issued soldiers MREs, which are Meal Ready to Eat. Developments of MREs had been taking place since the early 1960s. They are much lighter than the older C Rations and they carry high nutrition levels.

As time moves forward with technology, we will probably see even better designs and improvements. But no matter what, don’t count on rations to ever taste like Mom’s home cooking.

Did you ever eat Army C Rations? I would love to hear any veterans thoughts on if the rations they were issued were much worse than the rations issued to soldiers today.

I distinctly remember eating the Chili Mac rations during bivouac in Georgia in he early 1980’s and it wasn’t all that bad. Plus, I probably would take it over hospital food.

So let’s hear your thoughts on C Rations, MCIs, and MREs. What were your favorites and least favorites? You can post all comments, questions and more below. Thank you.