Today, I’d like to take a few minutes to educate you on the Army Bar to Reenlistment. This post is a collection of information I found online. All sources are cited. Enjoy.

What is an Army Bar to Reenlistment?

If you’ve spent any time in the Army, I’m pretty sure you know what a Bar to Reenlistment is. However, if you’re thinking about joining the Army, and haven’t heard of it before, I hope to explain it in a simple way.

(1) He or she is not a candidate for reenlistment.

If I was going to put it in my own words, I would describe it as a tool used by commanders to enforce standards, maintain discipline, and uphold the honors and traditions in the Army. 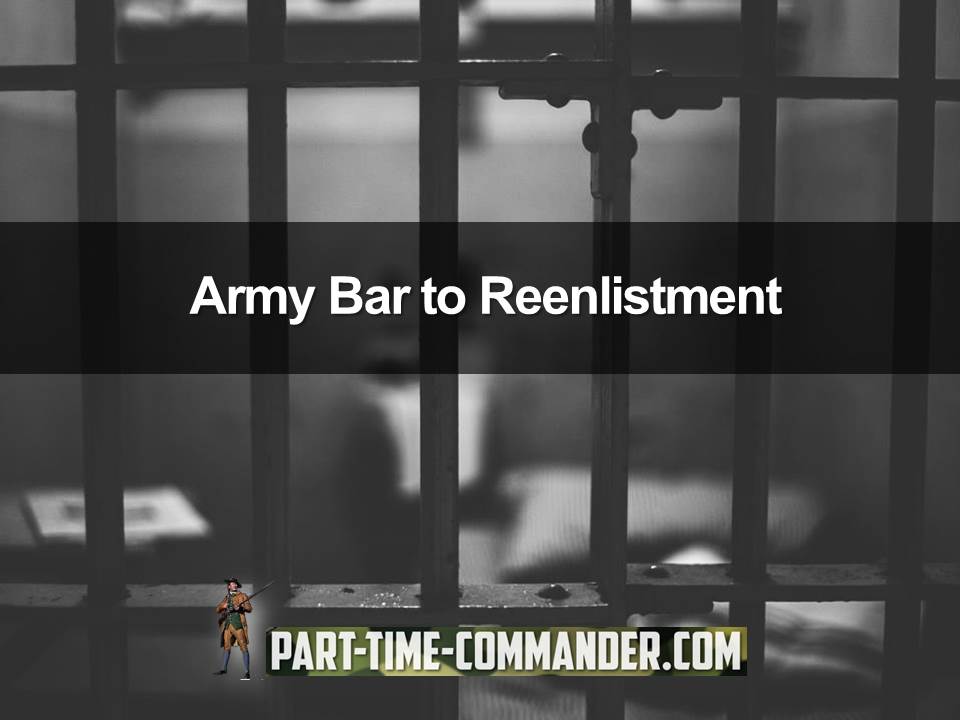 What Criteria Are Used in Evaluating a Soldier?

So, who determines who receives one and how is it done? Here is what I found online.

Soldiers should be evaluated under the “whole person” concept as set forth in AR 601-280, paragraph 3-7. Factors considered in this concept include patterns of disciplinary incidents, recent conduct and performance, aptitude, and potential for future service.

Normally, bars will be initiated on soldiers who are:

(1) UNTRAINABLE. These are soldiers who cannot perform the basic tasks of their PMOS. Examples include failure to achieve individual weapons qualification, failure to pass the APFT, and substandard evaluation results.

(2) UNSUITABLE. These are soldiers who have aptitude for continued service, but demonstrate a lack of desire or interest in meeting reenlistment standards. Examples of unsuitable conduct are: substandard personal appearance or hygiene, debt/financial problems, Article 15 punishments, shirking duties, apathy, frequent difficulties with fellow soldiers, and causing trouble in the civilian community.

For most soldiers, there is really nothing to worry about. Unless you make poor decisions, get out of shape, or stop doing the right thing, you will never receive one during your time in the military.

Guidelines for the Bar to Reenlistment

Here are the details for the procedures and guidelines, right out of the Army Regulations.

Guidelines for use of bar to reenlistment procedures:

Any commander in the Soldier’s chain of command may initiate a Bar to Reenlistment. Normally, this action will be initiated by the company, battery, troop, or detachment level commander. A senior commander in the chain of command who believes that bar action is warranted will personally initiate a bar by completing DA Form 4126-R (Bar to Reenlistment Certificate), signed in quadruplicate.

On this form, the commander will summarize the basis for his or her intent to initiate Bar to Reenlistment procedures. This will include the number and dates of courts-martial, incidents of nonjudicial punishment, and all other factual or relevant data supporting the commander’s recommendation.

The soldier will be flagged IAW applicable provisions of AR 600-8-2 upon initiation of the bar.

If you have questions pertaining to Bars to Reenlistment procedures refer to Army Retention Regulation – AR 601-280, Dated Jan. 31, 2006 or seek clarification from your servicing legal office or your local IG. 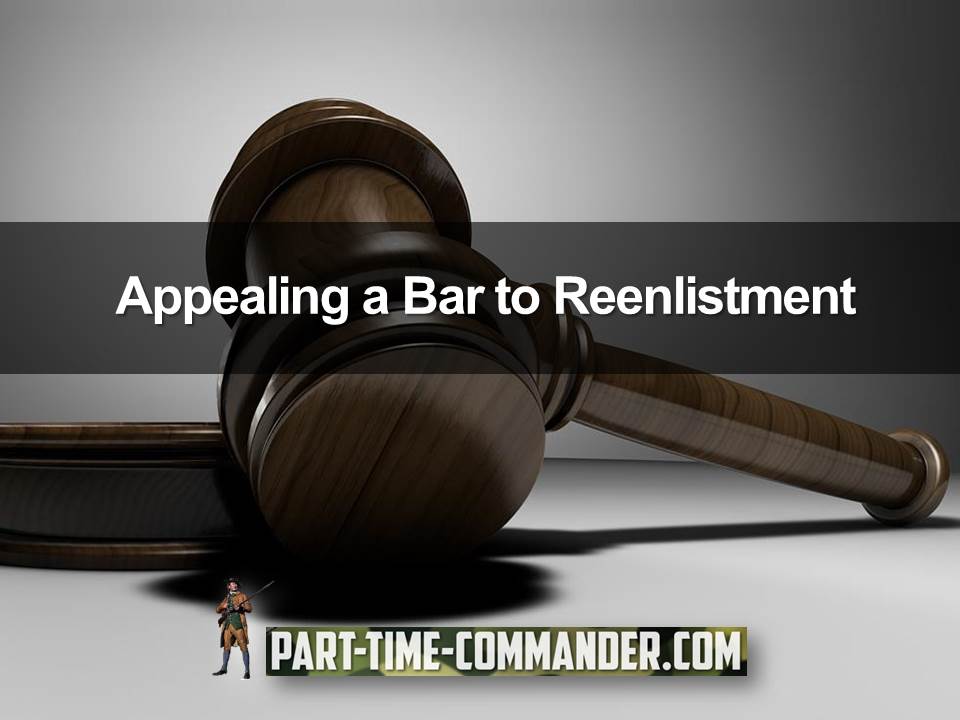 Can You Appeal an Army Bar to Reenlistment?

If you have received a Bar to Reenlistment, you do have rights. There is an appeals process. Just make sure you educate yourself first, so you know the procedures and guidelines. Here’s what I found online about how to appeal one.

Yes, AR 601-280 chapter 8 covers Bars to Reenlistment. With regard to appeals it states:

Soldiers desiring to submit an appeal who are otherwise qualified under the criteria of chapter 3, including those with approved waivers, will not be involuntarily separated while an appeal is pending. Should the soldier desire to submit an appeal, but refuses retention to allow processing of the appeal, he will be informed that the bar will remain in effect. From the time he is informed that the bar was approved, the soldier will be allowed 7 days to submit an appeal. On a case-by-case basis, an extension of this period may be granted by the commander initiating the bar procedure. Appeals will be endorsed personally by each commander (or acting commander) in the chain of command, and approved or disapproved by the proper authorities shown in (1) or (2) below. Final approval of appeals will be at least one approval level higher than the original bar approval authority.

(1) For soldiers with less than 10 years of active Federal service at date of bar initiation, the approval or disapproval authority is the first general officer in the soldier’s chain of command, or the commander exercising GCMCA, whichever is in the most direct line to the soldier. The personal signature of the approving or disapproving authority is required.

(2) For soldiers with more than 10 years of active Federal service at the date of bar initiation, and who are not on indefinite status, the approval or disapproval authority is CG, HRC-Alexandria. Unless specifically directed by the approving authority, appeals will not be forwarded through Corps, MACOM, or similar commanders en route to HRC-Alexandria.

Did you find this information useful? I appreciate your feedback!

As a commander, the Bar to Reenlistment is a very valuable tool when used correctly. My best advice to you is to use it cautiously. Try other forms of discipline and corrective action first. Also, talk with JAG or your higher command about what their policies are.

As a soldier, stay out of trouble. Pass the APFT and HT/WT. Complete your military education. Do the right thing. Don’t go AWOL. Don’t do anything to make the Army look bad. Follow that advice and there’s a high likelihood you will never have to worry about receiving a Bar to Reenlistment.

There you have it folks. I hope you enjoyed my article on the Bar to Reenlistment. I would love to hear your thoughts. If you’ve ever given or received a Bar to Reenlistment during your Army career, please leave a comment below and tell us what your experience was like. Thanks for stopping by and thanks for your service.