In today’s post, I want to share what I believe are the top 10 Army Artillery Shells of all time.

Artillery is considered a weapon of warfare that is built to fire far beyond the range of small arms fire from infantry Soldiers. With that knowledge, you can see that artillery covers a wide scope of weaponry.

Artillery has been used in warfare since days of old. The Roman Legion is often recognized as one of the first armies that employed units of artillery with catapults that would launch burning oil or huge rocks. Army leaders will tell you that artillery placement is one key to success in battle. Artillery can provide cover and back up for infantry troops. 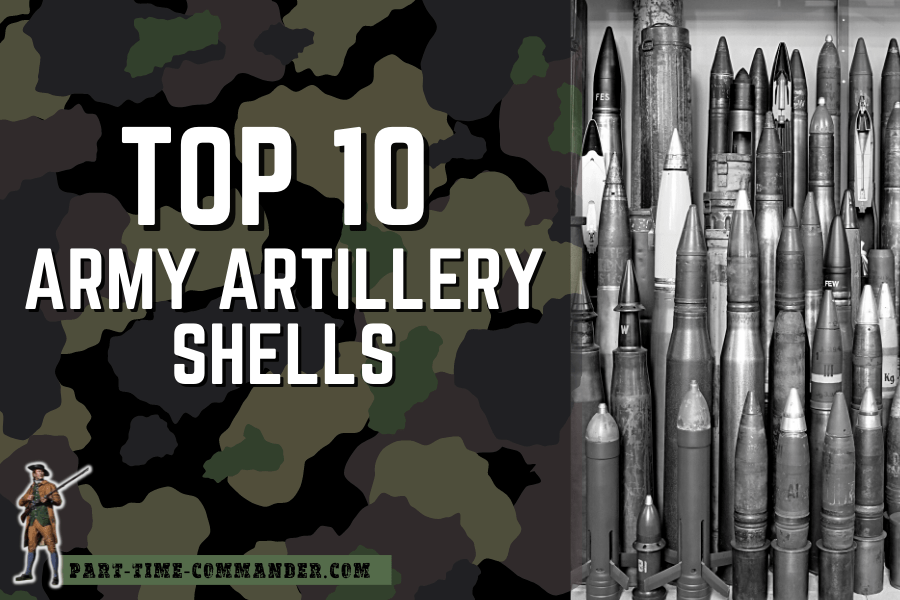 In the paragraphs below, I’ve researched various artillery shells used by Army forces over the years. I will give you my opinion of the top 10. Your opinion may differ, but I am looking at several factors, to include:

I will start with #10 and work up to #1. There is a comment area at the end of this article where you can share your opinion.

The .50 Cal BMG is the “go-to” ammo for snipers. You will see .50 Calibers mounted on various military vehicles. The .50 Cal has been a death sentence to enemies of the United States. While smaller than other shells that didn’t make the list, the sheer numbers of dead enemies gives this round its rightful place on this list.

The .50 BMG round can produce between 10,000 and 15,000 foot-pounds force (14,000 and 20,000 J), depending on its powder and bullet type, as well as the weapon it is fired from. Due to the high ballistic coefficient of the bullet, the .50 BMG’s trajectory also suffers less “drift” from cross-winds than smaller and lighter calibers, making the .50 BMG a good choice for high-powered sniper rifles. ~ Wikipedia

This is one of the heaviest used mortars by the United States Army. It is an 81 MM mortar. Firing the M252 takes a crew of five:

At this caliber, the M252 81mm mortar is practically a light artillery piece. The kill radius of the 10-pound HE round is approximately 35 meters. The maximum effective firing range is 5,700 meters, with a minimum range of 80 meters (that’s really close). With a maximum rate of fire of 33 rounds per minute, and 16 rounds per minute over a sustained period of time, these mortars offer a high level of capability. The mortar can unleash a lot of explosive firepower within a target area over a short period of time. Do not discount or underestimate the small and mighty mortar! ~ SOFrep.com

Made for Howitzers, this projectile will do some serious damage. Weighing approximately 90 pounds, these projectiles have over 12-pounds of explosives and are fitted with fuses. Now outdated, these are still used for training purposes.

The body consists of a hollow steel shell containing high explosive (either TNT or Composition B) painted olive drab with yellow markings. A fuze adapter is screwed into the body and brazed in place. An eyebolt lifting plug is screwed into the fuze well to assist in transportation. The plug is removed and replaced with a fuze for firing. The complete projectile weighs 43.2 kg, is 800 mm long and contains 15.8% explosive by weight. It is a separate-loading projectile – propellant bags or MAC charges are loaded separately. ~ Military Fandom

On detonation it produces approximately 1,950 fragments.

This smaller 60 MM mortar can be fired using one person. The M224 was a great help in battles and skirmishes in Middle East conflicts. The effective range is up to 3,000 yards. The M224 rightfully deserves this spot on today’s list.

The M224 60mm mortar is a muzzle-loaded, smooth-bore, high-angle-of-fire weapon. The mortar can be fired in the conventional mode or handheld mode. It can be drop-fired or trigger-fired.

The M224 provides air assault, airborne, ranger, and light infantry rifle companies with an effective, efficient, and flexible weapon. The inherent limitations of a light mortar (short-range and small-explosive charge) can be minimized by careful planning and a thorough knowledge of its capabilities. The M224 can be employed in several different configurations. The lightest weighs about 18 pounds; the heaviest weighs about 45 pounds. Each round weighs about 4 pounds.

The mortar can be fired accurately with or without a fire direction center. The short minimum range of the M224 makes the mortar well suited for close protective fires against an assaulting enemy, for block-to-block fighting in cities, and combat over close terrain with restricted visibility. ~ Inetres.com

This artillery shell had to be listed even though a live nuke round was never used on the enemy. The system is called the Davy Crockett, and we would now consider it one of the craziest projectiles ever invented.

The weapon was a recoil-less weapon that sat on a tripod and would fire this nuke that carried a small nuclear explosion. The biggest issue was that the crew would probably die after firing it unless the wind was blowing in the right direction. This was the ultimate suicidal weapon.

The limited firing range was due to the combination of poor aerodynamics of the “watermelon with fins” (some soldiers referred to the warhead as the “atomic watermelon”) type shape and the warhead’s inability to withstand being fired like a traditional artillery round. This meant that it had to be fired out of a short range recoilless rifle. ~ Wikipedia

It is a good thing the Japanese surrendered when they did or this massive mortar would have caused much more destruction. Little David was a 914 MM mortar with a 22 foot barrel. It would fire a 3,400 pound shell at over a five mile distance.

Intended as a siege mortar to bombard fortifications in mainland Japan. Having a calibre of 36 inches (914mm), it is one of the most high calibre muzzle loading mortars ever built. The whole piece weighed 78.000kg and would be split up in two parts for two 40 ton artillery tractors to transport. It would be accompanied by an dedicated bulldozer and crane to dig the mortar in to place. ~ FHSW Fandom 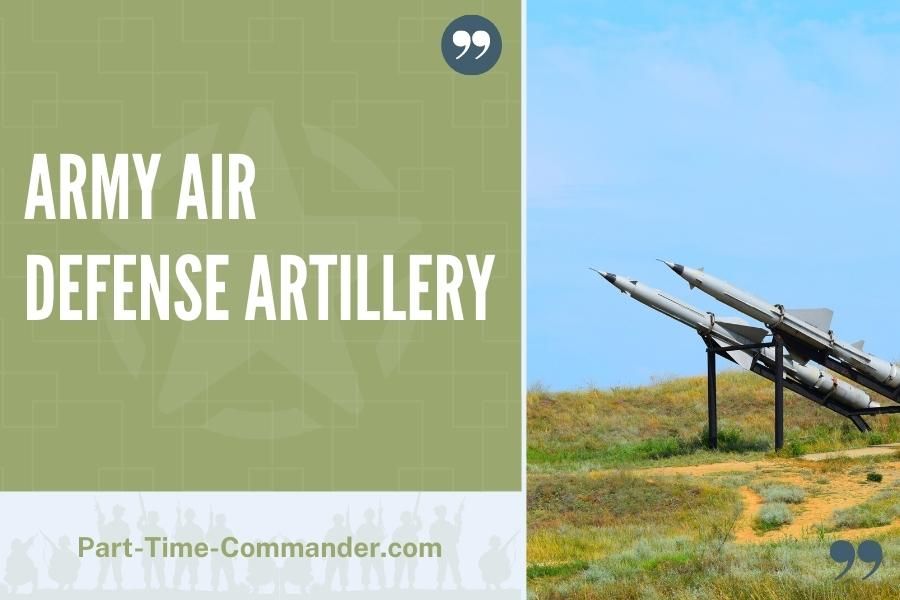 The M712 is a 155 MM laser guided shell that is cannon launched. The target is illuminated with a laser and the shell travels directly to the laser point. The effective range for this shell is over 9-miles. The M712 was used with great success in Operation Desert Storm.

Upon being fired from its howitzer, the Copperhead follows a ballistic or glide trajectory.  After it reaches the apex and begins its descent phase, guidance vanes extend from the round and the onboard optical system picks up the laser-illuminated target while the guidance system maneuvers the round onto target.  The target is illuminated by a forward observer using a laser target designator (LTD).

It has a large effective range, up to 16km, but several factors limit its use.  It has a minimum firing range of 3km to allow the round to maneuver on target and is less effective in heavy cloud cover and in low visibility conditions.  Additionally, the forward observer must keep the illumination laser trained on the target until impact, something difficult to do on a moving target or from far away. ~ WSMR Museum

This shell is a fire and forget weapon. It uses HEAT technology and has been extremely successful in tank destruction. The Javelin was designed to hit the upper extremities of tanks where the armor is thinner. It is operated by two Soldiers.

The Javelin missile features a tandem HEAT warhead. This is able to penetrate armor equivalent to 600 to 800 mm RHA. Since the Javelin attacks targets from the top it is able to engage all types of vehicle currently in use. Early missiles have a maximum range of 2.5 km. Current generation missiles can be used out to 4.75 km. ~ WeaponSystems.net

Using GPS, the M982 is a 155 MM guided artillery shell that can fly for an extended range. It is effective up to 14-miles. Each shell is quite expensive, but has been used with great results. It is especially good when accuracy to save civilians is important.

One Excalibur round can hit a target that would otherwise require of between 10 and 50 unguided artillery rounds. The Excalibur uses different types of munitions depending on the variant. The baseline version weights 48 kg and carries a 22 kg High Explosive (HE) warhead. The fuse can be programmed to explode in the air, on contact with hard surface or after it penetrates inside a target. ~ Military Today

This is an air to surface projectile. It has been used with high rates of success from Predator Drones. It is also used from U.S. Army rotary aircraft.

The AGM114 Hellfire has been the cause of death for many terrorist factions. I believe it takes our #1 spot because of the amount of kills it has had against our enemies.

Hellfire can be used as an air-to-air or an air-to-ground missile. The Air-to-Ground (AGM)-114 provides precision striking power against tanks, structures, bunkers and helicopters. The Hellfire missile is capable of defeating any known tank in the world today. It can be guided to the target either from inside the aircraft or by lasers outside the aircraft. ~ Military.com

In conclusion, this is my ranking of the top 10 Army artillery shells of all time. Artillery has an important role on the battlefield. That’s why it’s known as the King of Battle. All of the artillery shells mentioned above have their own unique purpose.

What are your thoughts? Do you agree or disagree with my ranking of the top 10 Artillery Shells of all time? Leave a comment below to share your thoughts. I look forward to hearing from you. Thanks.

If you’re a fan of artillery, you should check out these books on Amazon: Artillery in the Great War, M65 Atomic Cannon, and Firepower for the Panzer Divisions.