In today’s post, I am going to educate you about Alexander the Great. At the end of this post will be a reference section so you can learn even more.

Alexander the Great was one of the greatest military leaders in all of history. He was a master of war strategies and he believed in skill more than he believed in sheer numbers. He proved that an army that is outnumbered can be victorious with proper leadership.

Even though Alexander the Great was a military leader long before rifles and hand grenades, we can still learn a lot from this great military genius. 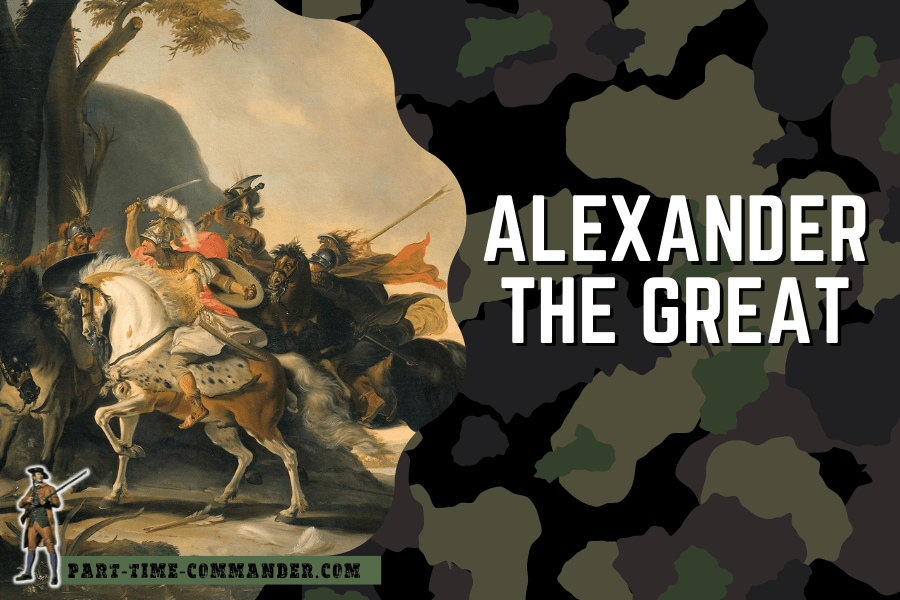 Alexander was born in July, 356 B.C. He was born in Pella, Macedonia. Pella is still a large city in Greece.

To attain the best education for his son, King Philip II hired one of the world’s greatest philosophers to educate 13 year old Alexander. Aristotle taught the young prince for approximately three years.

When King Philip II was assassinated, Alexander worked quickly to guarantee his rights to the throne. He even had his cousin killed. At 20 years old, Alexander became King of Macedon.

He regularly washed his hair in saffron to keep it a bright orange and smelling nice.

In 15-years of battles and wars, he never lost a battle.

Let’s look at the battles that Alexander the Great was the master of:

There were other smaller battles and skirmishes. He prevailed in all.

In his conquering, Alexander named around 70 cities after himself. We know of a major one in Egypt even today.

During the battle against King Porus, Alexander’s horse was killed. The horse’s name was Bucephalus and because of this, the city of Bucaphela was named after his horse. It is in modern day Pakistan.

Alexander held 4 titles at one time. They were:

In his lifetime, Alexander had 3 wives. They were:

It is believed that Alexander had 2 children, but both were killed before they were adults. They were:

There was a knot tied to a wheeled cart in Gordium which is in what we know as Turkey today. The knot was tied by the Father of King Midas. It was believed that anyone who could loose the knot would rule Asia. After fiddling with it for a bit, Alexander unsheathed his sword and cut the knot. And he did rule Asia.

While it was controversial with the Macedonians, when Alexander defeated the Persians, he began to dress as they dressed. This gained him respect from the locals.

Alexander died while in his early 30’s. He passed away in Babylon, Persia which is modern day Iraq.

To preserve Alexander the Great’s body, he was put in a casket and a vat of honey was poured all around his body.

Nobody really knows for sure how Alexander died. Some believe he may have been poisoned, while others think it was malaria. Will we ever know?

Some have claimed he had god-like attributes. He was probably the greatest military leader of all time. Even today, military leaders study the tactics Alexander the Great used. 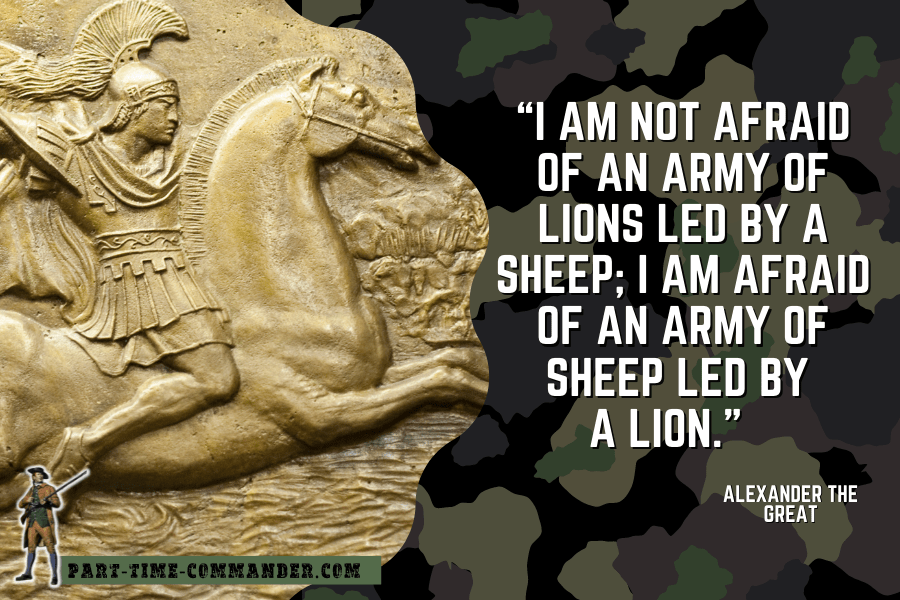 Why He Was a Great Military Leader

What I want to do in the following paragraphs is share why I believe Alexander the Great was such a great military leader.

It is my opinion that no leader can find success unless they have a clear vision. Alexander The Great had a grand vision and he was able to “paint a picture” of that vision to his followers.

By having a vision, Alexander was able to set specific goals and objectives to achieve his vision. Do you have a vision?

For ancient military leaders, being ruthless was an important attribute. I don’t know if that would be a great attribute in today’s military (it could lead to a war crimes judgment).

By showing ruthlessness the moment his Father, King Phillip II of Macedon was assassinated, Alexander showed his ruthlessness by having all rivals murdered.

He also showed ruthlessness when he would give kingdoms a chance to surrender and if they hesitated, he would destroy everything.

By being this way, Alexander The Great created a fear of his power and abilities. Many enemies just gave up immediately knowing how ruthless he was.

While Alexander was a great tactician and strategist, we all must also admit that “Lady Luck” was also on his side.

There were several occasions when Alexander’s forces were greatly outnumbered but because of simple luck along with wise movements by Alexander, they gained the victory. No matter how you look at it, luck had a place in his life.

How was Alexander The Great arrogant? All the cities were named after him when he defeated them. Statues of his image were erected in his presence.

I don’t believe that Alexander was a humble man, and it helped him in his exploits, but it may have killed him too. General Patton studied Alexander greatly, but we never saw a town named Pattonville… Or is there one?

Arrogance does not go with today’s military leadership.

Alexander the Great knew he would have to adapt to various circumstance, and he did so. If he had to walk instead of ride, he would.

If he had to use a weapon he normally wouldn’t in a situation, he would. No matter the circumstance, Alexander The Great would adapt to it.

And why wouldn’t he? Alexander was educated by one of the greatest philosophers that lived on earth, Aristotle.

We saw many times when Alexander used philosophy to gain the trust and admiration of the people he conquered. He even dressed like the Persians after defeating them.

Is this an attribute that made him a great military leader? I believe it is, because if he would not have been stubborn he would have listened to naysayers and probably would have never conquered as many kingdoms as he did.

If someone said he couldn’t do it, Alexander was stubborn enough to prove that he could do it.

One thing was sure, Alexander the Great would not ask his Soldiers to do something he wouldn’t do.

When a charge was on, Alexander was there leading the charge, not sitting in a headquarters far in the background.

# 9: His Father Was a Great Military Leader

King Phillip II was also a great military mind. The son inherited this ability from his father and I am sure Phillip taught him much while he was alive. Who we learn from can make a huge factor in our success.

# 10: He Inherited a Trained and Great Army

Falling right in with #9, Alexander did not have to build and train an army. He was given a greatly trained army.

All he had to do was add his touches and gain their trust and respect. The army listened to and followed Alexander.

Alexander discovered at an early age to never stop learning. Being taught by Aristotle, he understood that he could learn something new at any time and anywhere.

This is one attribute all military leaders need. We can learn from reading, watching, and from other people.

This is one attribute that I am sure General Patton took from Alexander The Great.

I believe this because of General Patton’s quote: “A good plan violently executed now is better than a perfect plan executed next week.”

When Alexander chose a path, he followed it and committed to it. There was no turning back.

# 13: He Used All Available Tools and Devices

This goes right along with being adaptable. Alexander would use anything he believed could help his men gain the victory. Even at one point, the enemy wagons rolling down the hills had Alexander order his men lay on the ground with their shields up, and the wagons rolled over the top of them.

Alexander The Great always wanted to know what they were going into. He was wise enough to always send scouts so he could develop a plan of action before he would take his troops.

Scouts would go out and document the land, the enemy, and any other information they could find. They would return with the information and Alexander would develop a plan of action.

# 15: He Inspired His Followers

Just his demeanor would inspire, but when he spoke, his followers listened. Alexander The Great was a master at building morale.

After all, how else could he get his Soldiers to battle armies 3, 4 or even 5 times their size?

I believe one of his greatest means of inspiring was the fact that he would do what he asked. If only all military leaders were that way.

# 16: He Understood and Adapted to Cultures He Conquered

When Alexander the Great conquered a kingdom, he would get right in with the peasants and learn the customs. While he would allow the people to keep their customs, notice that I said he adapted the cultures.

The biggest way he did this was to make it mandatory that the Greek language was used. It reminds me of how the English language has become the primary language on earth.

Just seeing the man made people desire to follow him. It is said that even his body odor was delightful.

Charisma is not something anyone can learn; I believe it is something people are born and blessed with. But like luck, I believe charisma played a huge part in making Alexander The Great the greatest military leader ever. 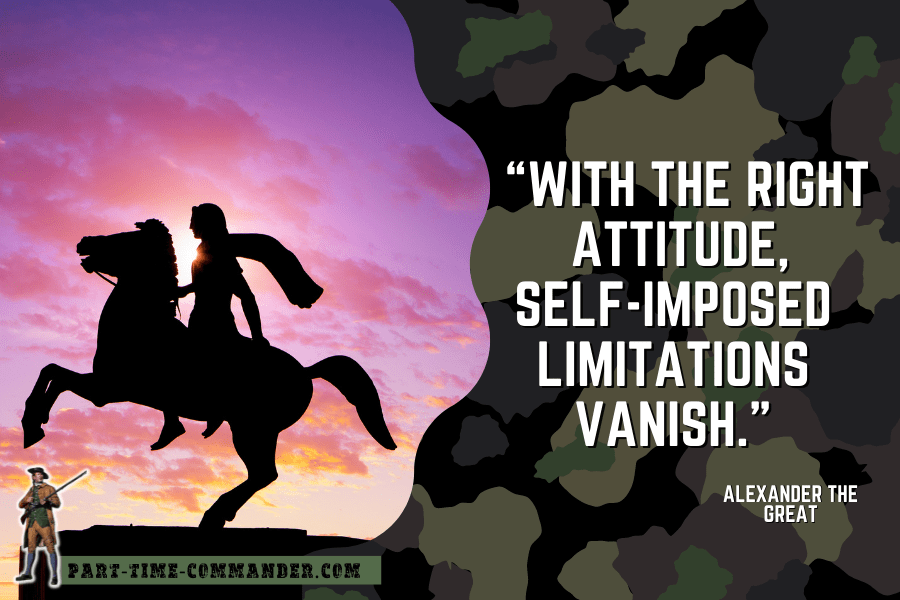 To close out this post, I’ve decided to share a few of my favorite Alexander the Great quotes. Each quote is in bold and italics. After each quote I will share my own two cents on the topic.

I would rather live a short life of glory than a long one of obscurity.

We get one go around in life. It’s better to live a shorter life and do great things than live a long life and do very little.

My logisticians are a humorless lot … they know if my campaign fails, they are the first ones I will slay.

If you believe in yourself, you can achieve just about anything you desire.

In conclusion, Alexander the Great was easily the top military leader of all time. Even though he lived a short life, he accomplished so much. His tactics and strategies are still studied today by many of the world’s greatest military leaders. What are your thoughts? What are your biggest takeaways about Alexander the Great? Leave a comment below to let me know what you think. I look forward to hearing from you.

If you’d like to learn more about Alexander the Great, you can read this great book about his life and tragic death. See it on Amazon.