People ask me all the time why I resigned my commission as an Army Officer, considering I had 15+ years of service.  What was I thinking?  Why would I give up my pension?  Why would I walk away from a successful Army National Guard Officer career?

In today’s post, I want to do my best to answer that question honestly and objectively.  Please know that I don’t expect everyone who reads this post to understand my rationale or agree with me.  That’s perfectly okay. These views are simply why I made the decision that I did.

First off, I did not make my decision to resign my commission a random or overnight decision.  In fact, I spent two years thinking about it.  I weighed the pros and cons.  I analyzed it thoroughly.  I calculated what my pension would be.  I talked with trusted superiors and friends. I even talked to some retirees. I did my due diligence. So, it wasn’t some rash decision I made because someone upset me or because I had a bad day.  It wasn’t an easy decision either.

When I became an Army Officer in 2000, I made a vow from day one that I would never be one of the those folks “just doing time” or “waiting around to get my pension.”  I promised myself that if my heart was no longer in it, I would resign, regardless of how much time I had in.

I’ve always believed that Soldiers deserve to have good, competent leaders who WANTED to serve.  In fact, there are few things that make me angrier than someone staying in just to get a pension, even though their heart isn’t in it. You see these folks in every unit, and everyone knows they are dead weight who contribute very little to the unit (more on that in another post).  Maybe you even know someone like this.

Anyway, back to the topic at hand, here are the 8 reasons why I resigned my commission as an Army Officer.

1.  I Knew I Would Be a Staff Officer for a Very Long Time

When I resigned my commission, I was a new Major (about a year time in grade).  I knew that I would be stuck doing PowerPoint slides, OPORDs, MDMP, and meetings the rest of my career.  I knew I would be busy doing the behind the scenes grunt work, making someone else look good.  If you know me at all, you know I don’t enjoy doing that very much. I’m a leader, a doer, not some staff weenie.  I like being where the rubber meets the road, getting things done, and leading Soldiers.  I’m not knocking staff officers.  Heck, we need good staff officers.  I just had no desire to be on staff the rest of my career.

I knew that my leadership days were over.  Sure, I would make Battalion Commander in another five or six years, if I stuck around, but I didn’t want to wait that long to lead troops again. I also knew that even as a Battalion Commander I wouldn’t get much Soldier interaction. I would spend most of my time dealing with Brigade, and higher headquarters. I would spend most of my time in meetings, listening to things that didn’t even interest me (in most cases). To be quite frank with you, I like being the tip of the spear.  I am happiest when I get to work closely with Soldiers, NCOs and other officers in a “war-fighting” unit.  The thought of not doing that again was quite depressing.

3.  I Don’t Believe in the Wars We Are Fighting

I know, this reason will make some of you angry.  Oh well.  No, I’m not a hippie, protester, or anti-war radical. It’s not a political thing either.  I don’t trust any politician. During my time in the Army, I deployed to two combat zones.  I simply don’t like that the U.S. pushes our agenda on every other country in the world, especially when we have so many problems at home.  More importantly, I believe that troops shouldn’t be sent to any combat zone if Congress doesn’t officially declare war.  I didn’t want to get deployed again to fight in a war I do not believe in. I questioned (and still do) why we are fighting the wars we are fighting.  During my time in the Army, I never told anyone I was against the wars. This is the first time I’ve expressed my views publicly. I love my country, but I am quite frustrated with our government and political agenda.

4.  I Don’t Believe in the Current “Jerry’s Kid’s Mentality” that the Army Promotes

This is a big one for me.  During my short 15-year stint in the Army, the Army changed a lot.  What really got to me was the “Jerry’s Kids” and “Entitlement Mentality” in the military.  People expect everything to be handed to them on a silver platter.  A young soldier has more rights than their senior leader.  And the soldier discipline and standards in the Army (at least from my experience) have gone way downhill.  You see soldiers who don’t salute, don’t say yes sir/no sir when addressing an officer, and don’t show respect to their leaders.  I blame this on senior leaders in units who don’t set high standards and don’t enforce Army standards.  Although I am a young guy from Generation X, I am still old school. I believe in mental toughness, discipline and high standards.  The Army has definitely gotten away from that. Spend even 15-minutes in any Army unit and you will see what I am talking about.

5.  I Got Tired of the Politics

I’m not a political guy at all.  In fact, I HATE politics.  I call a spade a spade and tell it like it is.  I got tired of the officer politics. I got tired of my peers back stabbing each other trying to make themselves look good. I didn’t want to have to kiss someone’s ass just to make it on an Order of Merit List for a school or command position.  I had no desire to be part of the good ole boy system.  Looking back, I would have been much better off just staying enlisted.

6.  I Got Tired of the Unpaid Work Hours

I understand that officers get paid more than enlisted soldiers because they have lots of work outside of drill weekend.  I also understand that as you move up through the ranks you will have increased responsibilities. That’s fine. But, when you work 30 or 40 unpaid hours a month (or more) it can really create problems in your personal life. My “outside of drill weekend requirements” consumed way too much of my time and really hurt my businesses and home life.  Yes, it is a volunteer Army.  Some people might call my reasoning selfish, but last time I checked no one joined the Army to work for free.

7.  I Was Born to Be an Entrepreneur

I am a free spirited person.  I’ve always enjoyed being the boss and making my own decisions.  I’m a MAVERICK.  I don’t like being told what to do or having to ask permission to do anything. The older I get, the harder it is for me to take orders from people I wouldn’t normally follow.  You know, the people who outrank you simply because they’ve been in the military longer than you.

Furthermore, I knew that whatever rank I attained in the Army, I would still have someone telling me what to do.  Hell, even the Commanding General has someone to answer to!  As an entrepreneur, I am the Chairman of the Board of my company and I do the things the way I want to do them.  No bureaucracy.  No chain of command.  No SOP.  Just me. The only orders I take are from my wife (LOL).   Anyone who is entrepreneurial minded like myself understands what I am talking about.

I should also chime in and tell you that this blog would have been a conflict of interest.  As officer’s we’re not allowed to use our rank for personal gain. Some people might have thought I was doing that by having this blog.  I realized that the earnings potential of my blog was at least 1000x the potential of my pension. 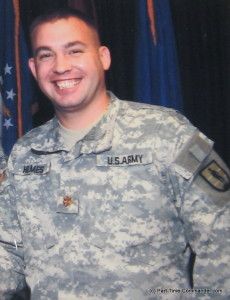 This might be one of my most important reasons I resigned my commission. You see, I know EXACTLY what I want to do with my life.  I know who I am and where I am going.  I have big goals and dreams for my businesses and life and knew it would be difficult to reach my goals, even if I just stuck around for my last five years until I could retire.

There you have it folks.  These are my eight primary reasons I resigned my commission as an Army Officer.  I apologize upfront if anything in this post upsets you or makes you angry.  That is not my intent.  Please know that I love the Army and I love my country. Serving in the military made me a better person, a better leader and a better father/son/husband.  I look back at my military service with great pride.

I’d like to close with one piece of advice.  That advice is “only you know what is best for you.”  Ultimately, you have to decide whether or not to continue your military service.  Your senior officers are going to tell you to stay in (unless you are a dirt-bag).  That is their job.  My hope is that you will weigh all of your options and make a deliberate, well thought out decision.  There is nothing wrong with staying in and there is nothing wrong with getting out.  But only you can decide what the best option is for you and your family.

Thanks for reading my post.  I’d love to hear your thoughts on the subject.  Please don’t leave any hateful or rude comments.  Those comments will be deleted.  But if you’ve ever resigned your commission from the military, or are thinking about doing it, I would love to hear your reasoning for doing so.  I would also love to hear reasons that made you decide to stay in and finish your military career.  All the best!