How familiar are you with the United States Army’s 7th Cavalry Regiment? The history behind this unit is long and quite interesting. I have decided to give you a slew of facts about the 7th Cavalry Regiment, so you have a better understanding of their proud history.

Let me begin by sharing the current MISSION STATEMENT of the 7th CAV:

The mission of the 7th Cavalry Regiment is to, on order, deploy and conduct reconnaissance operations to enable the cognizant Brigade Combat Team, 1st Cavalry Division to conduct decisive full spectrum operations. ~ First-Team.us 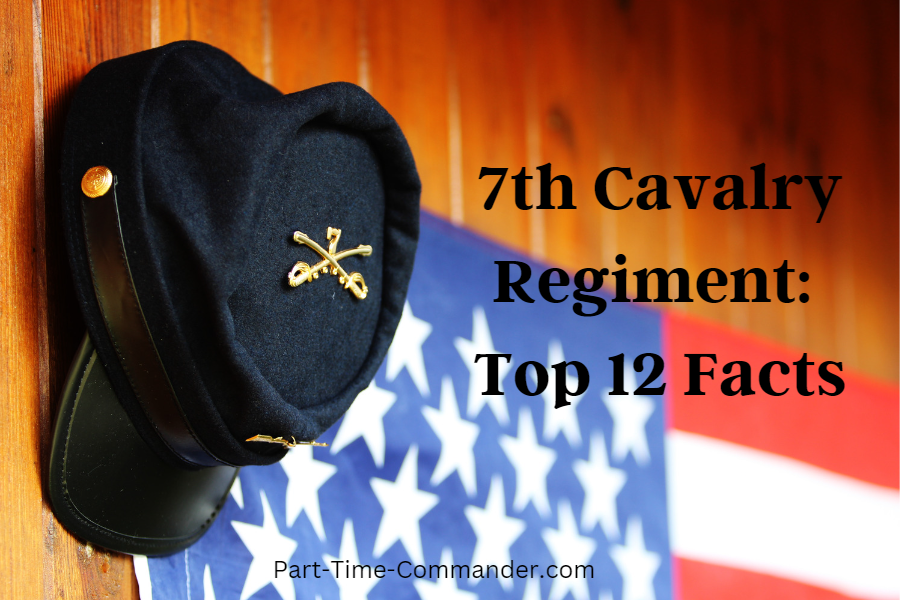 These top 12 facts are not listed in any certain order. I am giving them to you as they come, so read all the way through so you understand everything you possibly can about the 7th Cavalry Regiment.

It was due to the fact that the U.S. Army was demobilizing many Civil war and draft forces, they realized they needed a force in the Midwest. The 7th Cavalry Regiment was activated in 1866 at Fort Riley, Kansas.

The 7th Cavalry Regiment became officially known by their nickname Garryowen. This is from the march song they adopted from an old Irish tune.

Fact #3: The Protection Of Pioneers

The primary reason the 7th Cavalry Regiment was formed was to protect pioneers who had decided to travel West to form a new start.

At the end of the American Civil War, the ranks of the Regular cavalry regiments had been depleted by war and disease, as were those of the other Regular regiments. Of the 448 companies of cavalry, infantry, and artillery authorized, 153 were not organized, and few, if any, of these were at full strength. By July 1866 this shortage had somewhat eased since many of the members of the disbanded Volunteer outfits had by then enlisted as Regulars. ~ Wikipedia

It has been determined that between 1866 and 1881, the 7th Cavalry Regiment marched a total of 181,692 miles. Just to give you a better idea what that means, let’s break it down further on averages.

Maybe that doesn’t sound bad, but could you march every day for 34 miles no matter the weather conditions? For 15 years?? 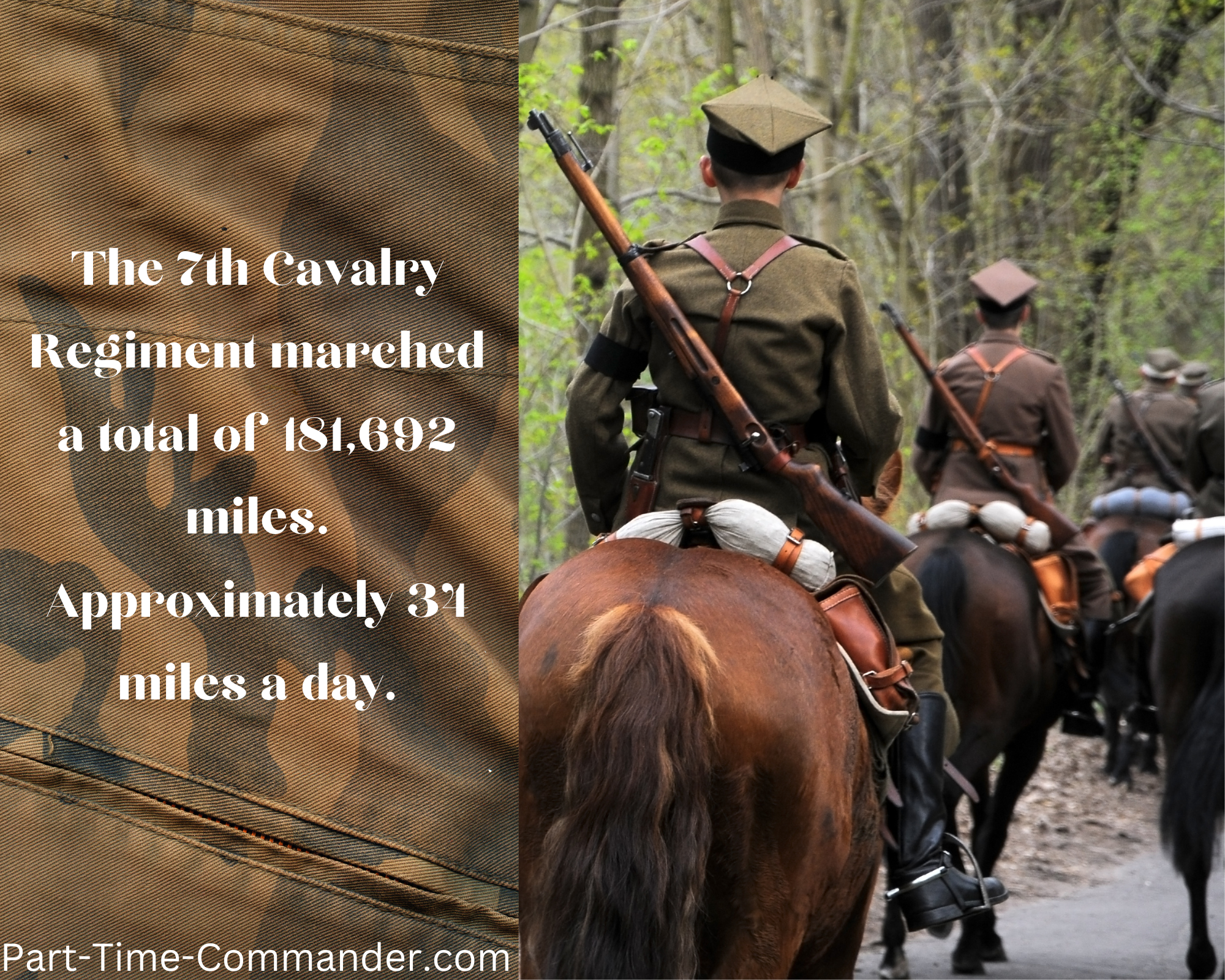 The 7th Cavalry Regiment was one of the primary U.S. Army forces involved in the American Indian Wars, most notably the Battle of Washita.

The Battle of Washita River

This happened in late November of 1868. Lieutenant Colonel George Armstrong Custer led the 7th and Black Kettle was in charge of the tribe of Southern Cheyenne. This battle was on the Washita River near present day Cheyenne, Oklahoma. Over 570 soldiers attacked the tribe of 150 warriors and another 100+ women and children. 21 soldiers were killed and it is estimated that anywhere from 40 to 100 Indians were killed. Many were women and children. Custer was hated for his actions in leaving without Major Elliott and his men.

The Battle of Pease Bottom

This battle took place on August 11th, 1873 between Custer’s 7th and the Lakota Sioux led by Sitting Bull. It took place on the Yellowstone River directly across from the mouth of the Bighorn River in Montana. The 7th had approximately 500 soldiers and the Sioux had around 400 warriors. Each side had only three fatalities.

The Battle of Little Bighorn

This is also known as Custer’s Last Stand. It took place on two days in June of 1876 and was a huge win for the Indians, namely,

268 soldiers were killed while it is believed about 40 Indians were killed. Among the casualties were George Custer and several other Army leaders.

Since only one white soldier and one Native American were killed in the skirmish, Custer’s short battle along the Tongue River seemed relatively insignificant at the time. However, Custer’s easy escape in his first encounter with Sitting Bull and Crazy Horse may have given him a dangerously scornful view of their fighting abilities. It helped to confirm his belief that the Plains warriors tended to flee rather than fight. As a result, when Custer again encountered Sitting Bull and Crazy Horse at the Little Big Horn River three years later, his greatest fear was that they would withdraw before he could attack, and he rushed in without proper reconnaissance. That time, though, the Native Americans stood and fought, leaving Custer and more than 200 of his men dead. ~ History.com

The Battle of Canyon Creek

This battle took place at Canyon Creek near present day Billings, Montana in September of 1877. It was between the Nez Perce Indians and approximately 400 soldiers. Accounts state the Nez Perce were victorious.

The Battle of Bear Paw

This was a long battle lasting five or six days and nights. The 7th was led by General Oliver Howard and Colonel Nelson Miles. The Nez Perce were being led by Looking Glass and Chief Joseph. After a long battle in the cold Montana mountains, Chief Joseph surrendered.

It is considered a “black mark” against the United states Army and the 7th Cavalry. It seems a large band of Lakota had made camp near Wounded Knee Creek in present day South Dakota. The Army entered the camp demanding that the Indians give up their arms. One deaf soldier would not comply and the situation turned into a blood bath. They claim up to 300 Indians were massacred.

Fact #6: Between The Indian Wars And World War II

The 7th Cavalry Regiment served in the Southwest from 1895 until 1899. They were stationed at Fort Bayard, New Mexico, and Fort Sill, Oklahoma. They then went to Cuba from 1899 to 1902.

From 1904 to 1915, they served in the Philippines and after that, they patrolled the U.S. and Mexican border and took part in the Mexican Punitive Expedition. They did not take part in overseas action during World War I. They continued training as a horse cavalry right up to the start of World War II.

There were no more horses to be rode by the 7th Cavalry when World War II started. That didn’t stop them. They participated in many campaigns in World War II:

And after that, they proceeded to go an occupation duty in mainland Japan.

The 7th Cavalry Regiment was a force to be reckoned with in the Korean War. They were involved in some of the most deadly battles which included:

After Korea, the 7th was used more in reconnaissance roles. They received the newest weapons and when Vietnam began, the 7th was right in the midst. As a matter of fact, the 7th Cavalry had seven Medal of Honor awardees from Vietnam. They were:

The 7th continued to grow stronger in cavalry operations after Vietnam. They were equipped with the best tanks and also air cavalry (helicopter) mobility.

With the onset of World War II, the War Department determined that the 1st Cavalry Division (and the 7th Cavalry with it) would give up their horses. They reorganized as an infantry – cavalry hybrid, less horses, on 28 February 1943. The regiment fought in General of the Army Douglas MacArthur’s island-hopping campaigns from the Admiralty Islands to New Guinea through the Philippines. ~ National Archives Catalog

The 7th Cavalry has had units in almost every engagement in the Middle East. They were at

and they continue to play a role “over there.”

Fact #12: Commendations That Are Seemingly Uncountable

The 7th has been awarded so many commendations that it would be hard to count them all. The U.S. is blessed to have the 7th Cavalry Regiment as part of the defense of our country. Presidential Unit Citations were awarded for: 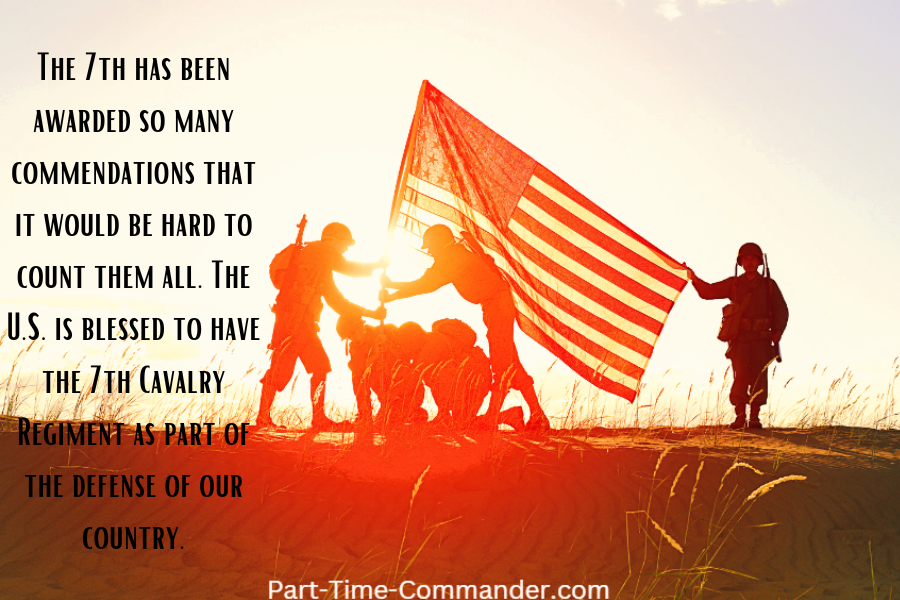 As you can see, the 7th Cavalry Regiment has a strong and undying history. I would love to hear from any current or past members of the 7th. Please tell us more. If you have any questions or comments, please post them below. Thank you.

If you’re interested in learning more about the 7th Cavalry, from the perspective of a young enlisted soldier, you should check out the book you see below.